Although Emily Blunt delivers a magnificent performance and the production features spectacular choreography, Rob Marshall's musical fantasy Mary Poppins Returns fails to capture the same magical charm as Disney's 1964 classic. The sequel lands on Ultra HD with an excellent HDR10 presentation and a satisfying Dolby Atmos soundtrack, but a small set of supplements. Still, the overall UHD package is Worth a Look.

Despite never personally growing up watching Disney's classic Mary Poppins, both the film and the mysterious magical nanny who floats down from the sky on an umbrella are familiar cultural icons with recognizable songs and music. Even when discovering it later in life, the musical fantasy still possesses a fairy-tale charm that's quite enchanting, still capable of casting a captivating spell that inspires the imagination. Unfortunately, the same can not be said of its sequel, Mary Poppins Returns, a title cleverly alluding to the character's literal and figurative comeback while also partaking in the current trend of revisiting Disney classics for contemporary audiences. Perhaps it has something to do with being fifty years too late or a predictable plot lacking the emotional gravitas for it to be effective. But frankly, this follow-up simply fails to capture the melodious magic and wonder of its predecessor while miraculously delivering spectacular dance choreography and imaginative visuals.

Director Rob Marshall has been making a career in the musical genre since his directorial debut Chicago, but his productions are frankly hit or miss with this one arguably falling into the latter category. Granted, there is something amusingly quaint about revisiting the Cherry Tree Lane neighborhood with the retired naval officer Admiral Boom (David Warner) still firing his canon atop his roof and paying an unexpected visit with the Banks children, Michael and Jane, who have grown up into Ben Whishaw and Emily Mortimer. But that feeling of nostalgia is soon replaced with the sudden realization the family has suffered a significant deal in the past year and on the brink of losing their house, literally turning bank officials Colin Firth, Jeremy Swift and Kobna Holdbrook-Smith into a dastardly wolf and his weaseling cronies. Littered with allusions to the 1964 classic, the adventure to save the family home leaves little room for surprises while oddly feeling like a cutesy retread. 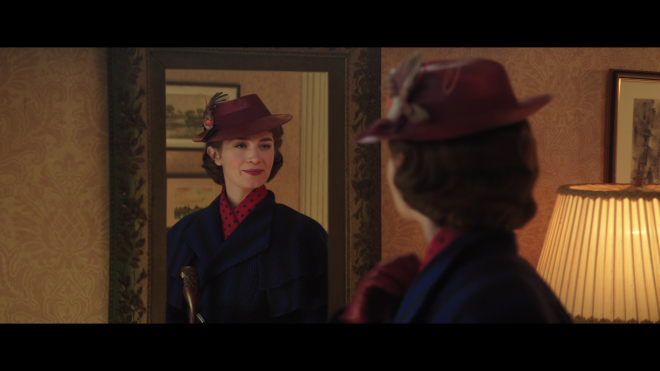 Marshall sprinkles seriousness with lighthearted spectacle, trying to balance the more somber conversations with upbeat musical dance numbers. It's effective in making viewers soon forget the kids just moments ago witnessed dear-ole dad on the verge of an impending nervous breakdown — by escaping into fantasy, which is a disturbing thought and in which Carl Jung would have a field day. And admittedly, the choreographed performances are pretty spectacular to behold with the "Trip a Little Light Fantastic" number being a highlight, and they almost always include cockney lamplighter Jack (Lin-Manuel Miranda), who essentially updates Dick Van Dyke's chimney-sweeping Bert. However, Marc Shaiman's music doesn't quite strike a celebrated charm or ever feel particularly memorable while the back and forth tone of the story never really finds the proper footing, feeling rather inconsistent as it treks towards a cheap cop-out conclusion.

Troubled and problematic as the plot may be, Mary Poppins Returns is not without its strengths, namely the performances of the cast and most especially Emily Blunt in the famous titular role. Long before coming into this production, she already had some gravely difficult shoes to fill, daring to repeat what Julie Andrews already perfected, but the star of Sicario and The Quiet Place is surprisingly splendid in the role, making it her own while simultaneously honoring the classic musical. She delivers her dry, waggish quips at the kids with the perfect balance of sardonic wit and deadpan playfulness, along with a sportive, sly smirk that flawlessly suits the character. Meryl Streep and Angela Lansbury also join the jovial merriment with a couple musical numbers while Van Dyke pays an unexpected visit at the eleventh hour. Sadly, such performances are wasted on a sequel that's soon forgotten much the same way it arrived: on a torn kite that should have been left in the attic.

Walt Disney Studios Home Entertainment brings Mary Poppins Returns to Ultra HD Blu-ray as a two-disc combo pack with a flyer for a Disney Digital Copy. When redeeming said code via RedeemDigitalMovie.com or MoviesAnywhere, users should access to the 4K UHD digital version in Dolby Vision HDR with Dolby Atmos. The dual-layered UHD66 disc sits comfortably opposite a Region Free, BD50 disc. Both are housed inside a black, eco-vortex case with an embossed, glossy slipcover. At startup, viewers are taken directly to the movie.

Mary Poppins lands on Ultra HD with a smashingly good and delightfully charming HEVC H.265 encode. Shot on the Arri Alexa camera system capable of 3.4K resolution and mastered to a 2K digital intermediate, the upscaled transfer may not cast a dramatically better spell than the Blu-ray, but it's nonetheless a welcomed step up. The magical nanny enchants with mildly sharper definition, exposing every nook and cranny of the house and the Cherry Tree Lane neighborhood, and fine lines in the furniture, architecture and costumes are slightly more distinct. It also comes with a few soft, blurry moments related to CG effects, and some of the sharpest edges waver marginally in a couple spots. Likewise, contrast remains about the same, for the most part, which is the result of Dion Beebe's stylized photography. Nevertheless, the 2160p picture is moderately brighter with slightly more intense whites while specular highlights occasionally dazzle the eyes during the fantasy sequences.

The more noticeable improvements in the cinematography are the slightly stronger gray tones in the orange-teal palette, meant to reflect the seriousness of what the family is going through. Furthermore, primaries enjoy an appreciable boost in spite of the filmmakers' creative intentions, especially the fuller, candy rose reds and the cobalt, admiral blues of Mary Poppins' stylish outfits. And while secondary hues may seem somewhat limited, they nonetheless dazzle the screen with a flamboyant array of pinks, cyans, chartreuses, rich golden yellows, purple violets and magentas during imaginative musical sequences. Black levels are notably inkier and silkier with distinct gradational differences between various shades. With excellent shadow detailing in the darkest, deepest corners, the 2.39:1 image comes with strong depth and rich cinematic quality, making this HDR10 presentation a welcomed guest into the family theater. (Video Rating: 76/100)

The front-heavy presentation displays a wide and spacious soundstage with the best moments come from the flamboyantly bombastic choreography sequences. Marc Shaiman's music sprawls across the front channels and into the top heights with superb fidelity and warmth while also lightly bleeding all around, generating a highly-engaging dome-like environ. Imagining benefits from the extra breathing room, continuously feeling broad and expansive as various of activity in the background convincingly pans between the speakers, and the midrange exhibits exceptional detailing and distinction. Remaining about the same, the dialogue is precise and well-prioritized. The low-end isn't aggressive, but then again, it's adequate and appropriate for a musical fantasy, generally reserved for the music and dance numbers, providing palpable weight and a hearty presence.

The biggest improvement is the rear activity, as a few bits of action occasionally employ the surrounds and nicely immerse the listener into this fantasy world of magic and imagination. As would be expected, Shaiman's music and elaborate choreography sequences take advantage and make the best use of the object-based format, as singing voices echo all around and dancers sometimes seem pan from the sides into the frame. From time to time, a few atmospherics are distinctly heard in the rears and overheads, notably adding a bit of ambiance to a couple moments but frankly failing to do the same during quieter, dialogue-driven scenes. In fact, the mix never really generates an effective hemispheric soundfield.

The design may not be the sort of showstopper we'd expect for a recent musical fantasy, but it serves the visuals very well and should ultimately satisfy fans. (Audio Rating: 82/100)

The accompanying Blu-ray contains all the supplements.

Mary Poppins Returns doesn't quite capture the same magical charm of the 1964 classic even though the production features several spectacularly choreographed performances. With excellent performances all around and a magnificent Emily Blunt, director Rob Marshall never really hits the right tone and balance, making this musical sequel a decent but ultimately forgettable follow-up. The mysteriously magical nanny lands on Ultra HD with a smashingly good HDR10 presentation that offers a few appreciable improvements over the Blu-ray and an excellent Dolby Atmos soundtrack that will satisfy fans. Accompanied by a small but still good selection of supplements, the overall UHD package is worth a look for the whole family.

Sale Price 7.59
List Price 26.5
Buy Now
3rd Party 49.99
In Stock.
See what people are saying about this story or others
See Comments in Forum
Previous Next
Pre-Orders
Tomorrow's latest releases