How well you enjoy Mary Queen of Scots depends entirely on how much romance fiction you want in your history. With some great performances from Margot Robbie and Saoirse Ronan dueling for the throne of England, the film plays very loose with historical facts and events and may be a bit too much of a melodrama. It's a beautiful looking film and entertaining but might be everyone's cup of tea. Universal delivers a stunning 2160p Dolby Vision 4K UHD Blu-ray with a richly atmospheric Atmos track. Bonus features sadly very slim. Mary Queen of Scots may not be historically accurate but it's at least entertaining. Worth A Look. (We have also reviewed the standard Blu-ray.)

Queen Elizabeth (Margot Robbie) rules England. Scotland is under the control of a Protestant coalition under the control of John Knox (David Tennant). Mary (Saoirse Ronan) has returned from France to claim her rightful throne as Queen of Scotland. What initially starts out as a chance for two estranged siblings to come together and rule their respective kingdoms amicably descends into a battle of religious intrigue and rebellions. As they spar for control of succession and the affections of the men in their lives, there can be only one Queen and she will shape the course of history. 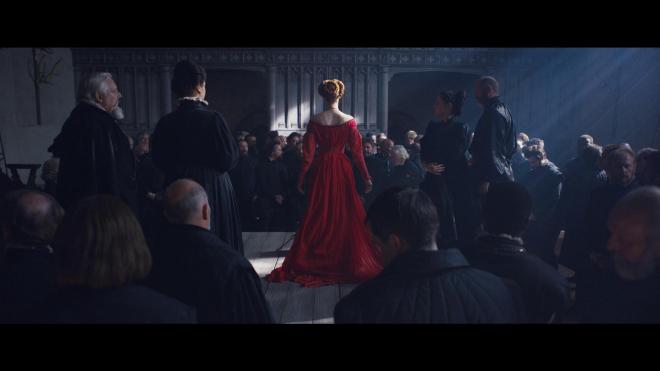 Before going into Mary Queen of Scots, ask yourself: what kind of movie you're interested in seeing? If you're after a historically accurate retelling of events involving two of history's most powerful women - who also happen to be related - then you're going to be left disappointed by the numerous factual liberties with key events and some notable casting choices. If you're after something in the realm of a well-produced, beautifully executed, and well acted romantic novel period drama, then you should be well off.

Going into this review, I was actually expecting the former considering the casting and stage producer Josie Rourke making her feature film directorial debut. One can forgive historical inaccuracies for the sake of making a compelling and dramatic film that audiences can follow, few can say Braveheart is altogether completely accurate. Between timing, characterizations, accents, and some pretty blatantly obvious casting, Mary Queen of Scots quickly settles into the latter category. While not completely a piece of tawdry historical fiction, the film takes many liberties and settles into being entertaining for entertainment's sake. Which is fine - once you get used to it.

While the story and many events and key players have been dumbed down or changed to lessen the political thriller elements and focus on romantic familial theatrics, the film is well paced, directed, the production design is exquisite, the costumes impeccable, and the performances first rate. Robbie and Ronan handily win the day as dueling monarchs with the fate of two nations caught between them. Guy Pearce delivers a delightfully conniving William Cecil with David Tennant going full out with the best beard in the movie as a sinister John Knox.

If all you're going in for is a distracting bit of historical melodrama, you can do far, far worse than Mary Queen of Scots. I know that doesn't sound like the winningest of recommendations, but I will say the film is definitely worth checking out. It's not the best, nor is the worst. It's just one of those films you should go in with your expectations in check. While I was hoping for a dramatic history film complete with a political thriller element, I wasn't completely disappointed with the end results. At two hours, the middle segment gets to be a bit long in the tooth, but the final third makes up for it.

Universal Studios celebrates Mary Queen of Scots with a two-disc 4K UHD Blu-ray + Blu-ray + Digital set. The discs are housed in a standard sturdy two-disc case with identical slipcover artwork. The disc loads directly to a static image main menu with traditional navigation options. All of the bonus features can be found on the 4K UHD disc. 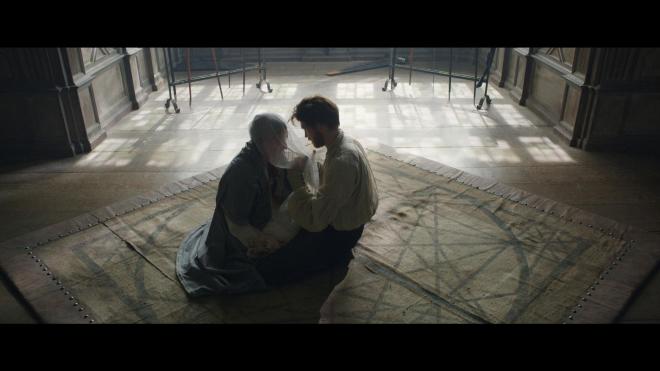 While I haven't been able to find out the resolution of the Digital Intermediate this 2160p Dolby Vision HDR  presentation was sourced from - it doesn't much matter - Mary Queen of Scots is a beautiful looking film. Basically, take all of the positives I wrote about the Blu-ray Presentation and dial them up to 11. Details may not offer a night and day difference there is a notable amount of refinement. Tiny patterning details in the clothing, stitches, and folds all become more apparent. Facial features benefit as well - the beards in this film are often pretty amazing, especially David Tennant who practically hides in a hood of hair with every little strand on display. Skin tones and pigmentation also gain a little extra clarity.

Dolby Vision HDR kicks things up allowing colors, black levels, and contrast to soak the image with notable enhancements over the 1080p SDR presentation. Black levels and contrast gained the most notable improvements as my issues with flatness and murky blacks on the Blu-ray have been mitigated and some blooming has also been pulled back. Colors are on point favoring the deep browns, blacks, and earthy green tones, but there is a little more pop to the presentation and primaries get a lot more life. There is a firelight gathering that enjoys a nice amount of natural yellow/orange flickering that wasn't as apparent in the Blu-ray that kicks up shadows and black levels. All around this is a picture-perfect presentation. 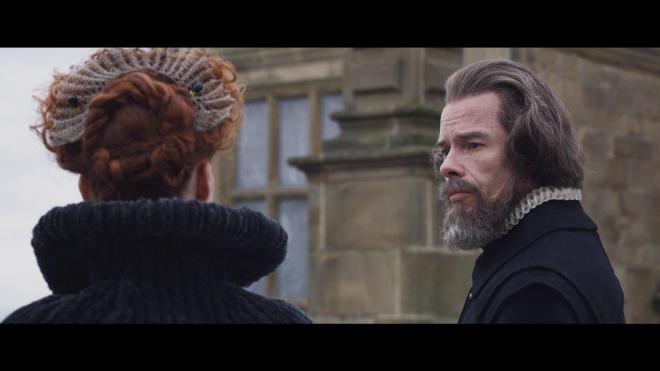 Even though it's a romantic period drama, don't count out Mary Queen of Scots in the audio department with a richly nuanced and effective Dolby Atmos audio mix. The basics are covered with rousing success. Dialogue is crystal clear throughout. Max Richter score is enthralling and fills the mix nicely. While this isn't a very action-heavy film, surrounds get a terrific workout as there is almost constant surround engagement. Even in small rooms with just a few people, the sounds of footsteps or swishing fabric keep the channels working.

Vertical atmospherics don't disappoint as the film takes place in castles and rooms with high ceilings and open space. The sense of dimension is constant making each location sound unique and alive in their own way. An early scene where Queen Elizabeth is leaving a council meeting and the hallway is filled with people is an atmospheric delight with all of the activity crammed into a small space. Equally impressive is how well the mix handles outdoor locations in Scotland with the rocky terrain and whipping winds catching flags and clothing. It's a hell of an audio mix and does the film justice. 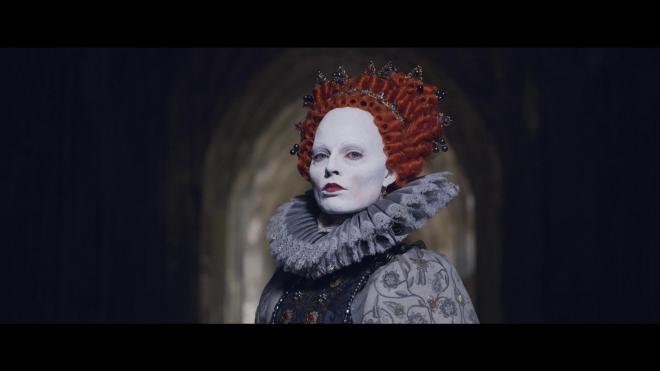 Aside from the audio commentary with Josie Rourke and Max Richter, this set of bonus features is a virtual non-starter. They're little better than a trio of EPK nonsense that doesn't really add much to the understanding of the film and the directions the story takes. 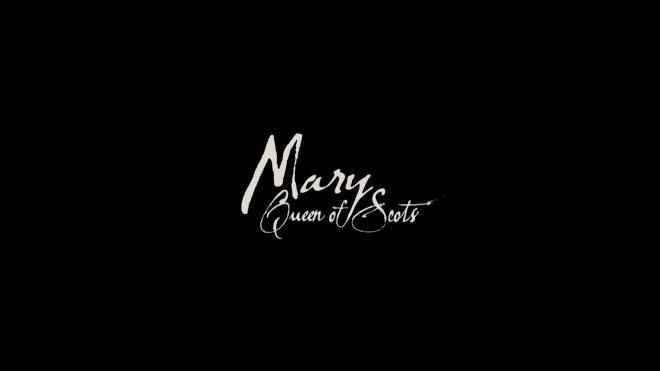 Mary Queen of Scots offers 4K UHD and object-based audio adopters something to see and listen to - even if the story is a muddled presentation of historical events. More of a romantic novel version of history, Robbie and Ronan deliver exceptional performances as two queens separated by religion and politics. A beautiful film to look at and listen to, Universal Studios delivers a technically excellent 4K UHD Blu-ray for Mary Queen of Scots. The 2160p Dolby Vision HDR transfer is gorgeous and provides notable improvements over its 1080p sibling as the Atmos audio track delivers an immersive sonic presentation. Outside of the audio commentary, bonus features are a bust. It's not the greatest retelling of historical events, but Mary Queen of Scots is good for some easy entertainment. At the very least it's Worth A Look.

Sale Price 17.96
List Price 29.98
Buy Now
3rd Party 59.99
In Stock.
See what people are saying about this story or others
See Comments in Forum
Previous Next
Pre-Orders
Tomorrow's latest releases