Returning to the ring to fight the ghosts of the past, Creed II is a superb follow-up to the reboot series, focused to the original classic's core theme of overcoming life's difficult challenges and featuring excellent performances by the entire cast. The sequel struts its stuff to the Ultra HD ring with a beautiful-looking Dolby Vision presentation, a satisfying Dolby Atmos soundtrack but a disappointingly light set of supplements. Nevertheless, the overall UHD package is Recommended for sports fans everywhere.

The grumpier, crabbier critic in me would judge Ryan Coogler's Creed as a lazy rematch of the classic Rocky disguised as a spin-off sequel to the original franchise, but the film delivered enough unexpected punches and passionate jabs to be a surprising knockout. Similarly, Creed II could be accused of the much of the same, returning to the ring to duke it out with the same opponent of Rocky IV. But once again, several unanticipated uppercuts and some fancy footwork come with a few unsuspected swings to the ribs and kidneys, sure to persuade some emotional tears out of the most hardened athletes in the audience. Of course, it could be argued moviegoers will need to be familiar with those two movies — and perhaps, even the entire series as a whole — in order for the punches to be effective. But director Steven Caple Jr., taking over for Coogler, outfits this direct follow-up with enough glimpses to the events of Rocky IV for viewers to still feel the plot's intended impact.

In this second round, Sylvester Stallone shares writing and producing credits with others while reprising the iconic role that made him a household name, and his plot borrows ideas from the first three installments but stays true to the core theme of the beloved franchise: a struggling everyman overcoming obstacles and challenges outside the ring. Only, in the new reboot entries, life's difficult hurdles are also fought by Adonis Creed (Michael B. Jordan), recently anointed heavyweight champion and son of Apollo Creed. And here, the filmmakers revisit the ghosts of our heroes, unknowingly haunted by the decisions and actions of the past. In bringing back the legendary Russian boxer Ivan Drago (Dolph Lundgren), Rocky is forced to relive the painful memories of a choice that cost the life of his best friend. At the same time, Adonis' first title defense against Ivan's son Viktor (Florian Munteanu) is an opportunity to confront what he feels was denied or stolen from him. 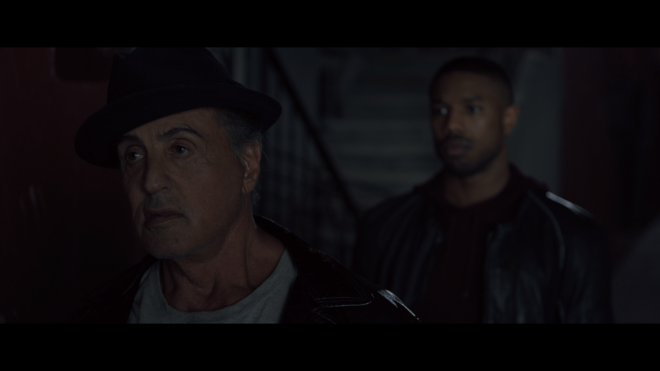 Essentially, this is a story about tackling the experiences of the past, or more specifically, that a single event of a long-ago, former life leaves an impressionable impact like a latent scar that never stops bleeding. And in Creed II, the infamous boxing match against Drago has grown into a repressed trauma that has left an invisible yet very permanent mark affecting the children of those involved. For Rocky and Ivan, the two men face that trauma vicariously through their fighters where Ivan can potentially repair a life of misery and humiliation directly caused by the event, but Rocky prefers not to talk about it, let alone even really acknowledge it. Meanwhile, the more fascinating aspect of the plot is the damage experienced by Adonis and Viktor, the immense emotional weight placed on their shoulders as though feeling responsible for correcting the mistakes of the past. Both walk into the ring fighting for something deeper and more abstract: being denied a childhood.

Fundamentally, at its core, Creed II is about fathers — or father figures, as is the case with Rocky and Adonis — and Caple subtly brings this to the forefront with exceptional care and understanding. Working carefully with cinematographer Kramer Morgenthau (Terminator Genisys, Thor: The Dark World), Caple's camerawork is admirably adept for constructing visually memorable and striking sequences reflecting the characters' struggle, even in the expectedly clichéd training montages. The scene of Adonis swimming in the pool while Bianca (Tessa Thompson) and his stepmother May Anne (Phylicia Rashad) talk about him are powerful, and Viktor seeing the mother who abandoned him during a celebration dinner is a heartbreaking moment that quickly gains the viewer's sympathy. And it's also interesting to see audiences revisiting an old struggle from the Cold War as tensions with the same former villain are once again reignited. All in all, Creed II is an excellent follow-up, both as a continuation to the new reboot series and as an installment to the original franchise.

Warner Home Video and MGM Home Entertainment bring Creed II to Ultra HD Blu-ray as a two-disc combo pack with a flyer for a Digital Copy. When redeeming said code via WB.com, it includes the SD and the HDX versions, but VUDU users can unlock the 4K UHD with Dolby Vision and Dolby Atmos. The dual-layered UHD66 disc sits comfortably opposite a Region Free, BD50 disc, and both are housed inside a black, eco-cutout case with a glossy slipcover. At startup, viewers are taken to a generic static screen with usual options along the bottom and music playing in the background.

The sequel steps up to the UHD challenge sporting an excellent and largely beautiful-looking HEVC H.265 encode, which goes the distance and decidedly beats out its Blu-ray contender with a few fancy moves.

Shot on digital HD cameras capable of up to 3K resolution, and later mastered to a 2K digital intermediate, the upscaled transfer dances circles over the Blu-ray with a welcomed uptick in overall definition. The stitching and wrinkles in the satin-polyester fabric of the shorts and robes are slightly sharper and better defined, the threading and individual hairs are a tad more distinct, and the creases in the gloves and leather jackets are a bit more discernable. The fast-moving action in the boxing matches maintains excellent clarity while facial complexions remain highly-revealing with healthy, accurate lifelike textures. However, a few extreme wide shots and several indoor scenes are noticeably softer than others, such as the stadium audience, and there are some instances of mild aliasing along the sharpest edges.

In spite of that, the 4K video comes with plenty to offer, giving it the slight edge after twelve rounds, such as the improved contrast and brightness making the training montage sequence in the California desert near demo-worthy. The brighter picture continuously delivers crisper, more radiant whites, maintaining an upbeat, hopeful feeling ironically in both fighter's comeback journey. From the hot stage lights and the special pyrotechnics show to the chrome trim of Adonis's Mustang and various other metallic surfaces, specular highlights glow with spectacular brilliance and luminosity without engulfing the finer details within the brightest, hottest spots. Likely the result of Kramer Morgenthau's creative cinematography, black levels waver in some areas, most notably during the fights and a few poorly-lit interiors, but they are nonetheless richer and inkier with velvety shadows and strong delineation, providing the 2.40:1 aspect ratio with appreciable dimensionality.

Again, given the filmmakers' stylized photography, much of this Dolby Vision presentation will seem to fall on the flatter side of things when set against other newer releases. Nevertheless, the intentions noticeably benefit from the upgrade to HDR imaging in several areas, as the orange-teal look now really pops compared to its HD SDR counterpart. The boxing matches, in particular, are quite striking, making the action feel all the more thrilling and sensational as much of the background appears bathed in strong cyan teals. Meanwhile, skin tones appear more natural and lifelike with a bit of a healthy rosiness around the cheeks, and daylight exteriors have a dramatically attractive golden hour appeal. At the same time, the reds in the boxing clothes are significantly richer with Drago's robe, especially, looking a vibrant candy rose while the rest of the palettes appear slightly fuller and truer to life, making this release a strong contender. (Video Rating: 84/100)

The sports sequel does a flashy swagger during its entrance walk to the ring with a loud, boasting Dolby Atmos soundtrack by its side. Similar to its first match from 2016, much of the action is maintained in the surrounds, creating a fairly enveloping environ for most of the runtime with the best moments coming from the boxing fights, filling the room with the endless cheers of excited patrons. The applause, whistles, and shouts of the crowd also echo into the overheads, generating a satisfying hemispheric soundfield that places the listener right in the middle of the action. Quieter, character-driven moments come with ambient effects convincingly but lightly panning from the fronts to the sides and rears, offering a better, more immersive experience, which is to be expected in a modern sports drama.

And with that in mind, much of the action is understandably spread across the fronts, crowding the screen with lots of background activity and the traffic commotion of the city. Atmospherics fluidly move between the channels and into the top heights to create a highly-engaging half-dome soundstage. As mentioned above, the best moments are, once again, during the fight sequences as the boxers dance around the ring and flawlessly back and forth from one speaker to the next, exhibiting superb distinction and detailed clarity in the mid-range. Vocals are precise and very well-prioritized amid the hectic chaos of the fights while also delivering outstanding intonation in the dialogue of the more emotional conversations. The low-end may not be the sort to rumble and shack the house, but bass is nonetheless impactful and weight, giving the fights and music a great sense of presence. (Audio Rating: 84/100)

All the supplements are available on the Blu-ray disc while the UHD contains only the film.

Adonis Creed and Rocky Balboa return to the ring in Creed II, featuring a rematch against a familiar foe who manages to open old war wounds. With excellent performances from the entire cast, the two boxers fight for more than just the championship belt and the adoration of the public, but also against the ghosts of their past, haunted by the ramifications of bygone decisions. The sequel struts his stuff to the Ultra HD ring with a beautiful-looking Dolby Vision presentation that goes the distance to defeat its Blu-ray contender and an excellent Dolby Atmos soundtrack cheering it along. Although the supplements are disappointingly light, they are nonetheless entertaining, making the overall UHD package Recommended for sports fans everywhere.