Green Book proves that it's not impossible to make a movie that tackles important topics and yet still remains a highly entertaining crowd-pleaser. Although a few more bonus materials would have been desirable, with a solid 4K presentation and wonderfully rendered Atmos track, this Ultra HD release is the one you'll want to own. Highly Recommended. (We have also reviewed the Blu-ray.) 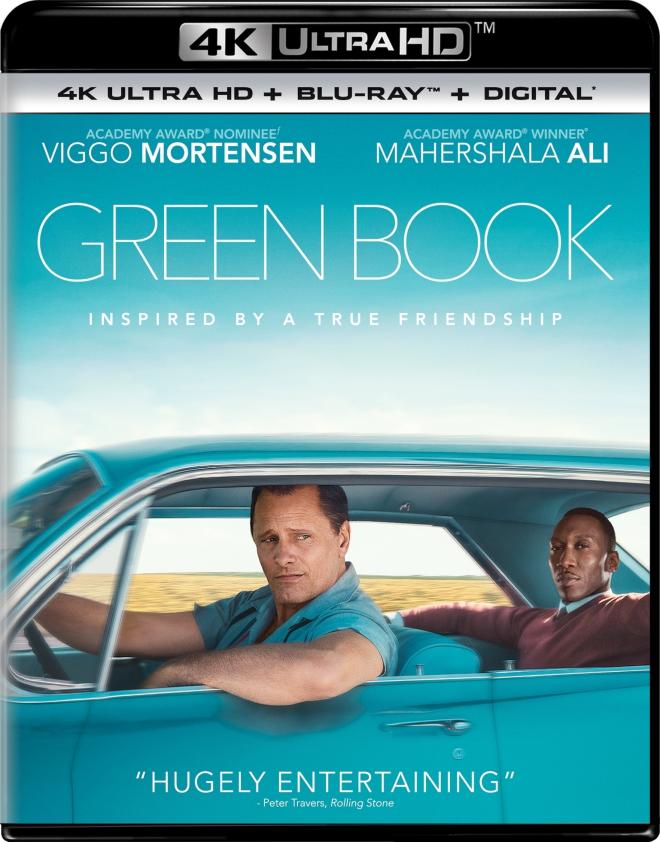 Green Book was the last of this year's Best Picture nominees that I got around to watching. Going into the film, Bradley Cooper's A Star is Born was still my personal preference. However, by the time the credits on this one rolled, it was at the top of my list as the best movie of 2018. A little more than 24 hours later, it had won Best Picture, along with Best Supporting Actor for Mahershala Ali and a Best Original Screenplay trophy as well. Also, a little more than 24 hours later, the controversy would begin as to whether Green Book was a worthy Oscar winner. It may not feel as "important" as those films that have gotten the award over the past decade or so, but Green Book falls firmly into the Academy's "old" method of choosing the best movie of the year: big, rousing pieces of entertainment with great characters that have something to say about the human condition. Green Book is like that.

The movie is based on the true story of Tony "Lip" Vallelonga (as told to his son, co-writer Nick Vallelonga), a New York City bouncer of Italian descent (played by Viggo Mortensen), who is hired in 1962 to drive piano player Don Shirley (Mahershala Ali) through the Deep South as he tours various cities he has a contract to perform in. Directed by Peter Farrelly (yes, that Peter Farrelly – the same guy who brought us Dumb and Dumber and a half-dozen other crazy comedies of the late 90s/early 2000s), Green Book is very much both a buddy picture and a road movie, but it also takes a serious look at the racial segregation in America during the Jim Crow era.

Green Book doesn't shy away from the idea that its lead character – Tony – is inherently racist, establishing the fact in an early scene when a couple of African American workers visit his house and, after they have left, he trashes the glasses his wife (played by Linda Cardellini) had offered them drinks in. The more time he spends with Don, however, the more he starts to see the injustices he has either not known about or has turned a blind eye to for most of his life.

What makes Green Book different from other period pieces that have dealt with the same issue is in the character of Shirley himself. Even though he's a man of color, he's had little first-hand experiences of the treatment fellow African Americans have received before he and Tony begin their journey. Furthermore, he's distanced himself from the black community – not having knowledge of their preferred music, food, or average lifestyle. Yes, as Don points out to Tony during a conversation in the film, it's offensive that Tony would think that all black people like the same things. But as Tony comments to Don, shouldn't he want to know more about how the majority of African Americans live? Both men are closed-minded in different aspects of life and for different reasons, and it's that angle that makes Green Book feel fresh, although it's obviously borrowing from many films of the past.

For those wondering how the term "green book" fits into any of the plot, it's the name given to a guide that was published for black Americans of the day – it listed "safe" (meaning they wouldn't be turned away or – worse yet – run into any trouble) hotels, restaurants, and establishments, not only in the Southern states, but all across the country. It's basically a "MacGuffin" in this story – it drives the plot a bit, but ultimately serves no purpose beyond educating the audience that such a book used to exist, and, of course, it helps to better explain to younger viewers why Don and Tony can't often stay in the same places during their journey.

For those who don't think Green Book tackles the issues of racism and segregation in a tough and realistic enough manner, your point is taken...but that's really not the type of movie that was being attempted here. This is just a good, funny, and in many ways old fashioned tale of two very different people who learn to understand one another during a time when it was very hard for two such people to make a connection. With two powerful performances by a pair of our best actors and infused with the kind of comedic touch Peter Farrelly has experience in, Green Book is one of those Best Picture winners that I believe is only going to grow in stature and admiration as the years progress. It's nothing groundbreaking; it's just really well made and entertaining.

Green Book drives onto 4K from Universal with the Ultra HD disc and 50GB Blu-ray disc housed inside a standard black Elite keepcase. A slipcover with artwork matching that of the keepcase slides overtop. The keepcase includes a single insert contains a redemption code for a digital copy of the movie. There are no front-loaded trailers on the 4K disk; however the Blu-ray is front-loaded with skippable trailers for On the Basis of Sex, The Bookshop, Boy Erased, A Private War, and Backdraft 2. The main menu on both discs features the same still image of stars Mortensen and Ali that graces the box cover, with menu selections vertically on the left side of the screen.

The Blu-ray in this release is region-free, while the 4K disc, of course, has no region coding. 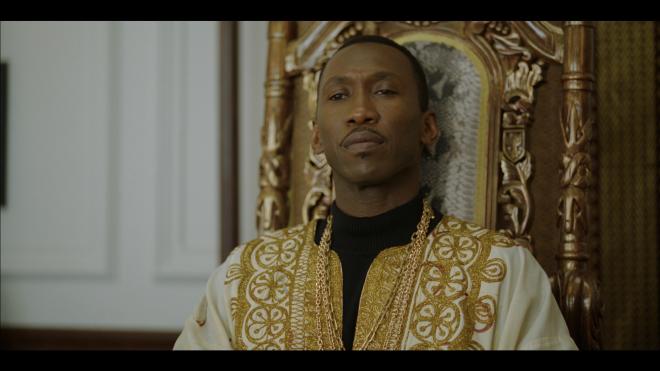 Green Book was shot digitally on the ARRIRAW at 3.4K, but the master was rendered at 2K for theaters, meaning this 4K version of the movie is an up-convert from a 2K digital intermediate. The film is presented in its original theatrical aspect ratio of 2.00:1.

The 4K image isn't a huge, leaps-and-bounds improvement over the 1080p Blu-ray, but that's not so much a knock on the 4K disc as it is a reflection of the fact that the Blu-ray looks pretty darn good. The most noticeable differences with the 4K disc are, of course, the boost of color and contrast provided by HDR. This is obvious in the opening scenes of the movie, where the jacket worn by Viggo Mortensen showcases a much deeper red than is seen in the 1080p version. There are a number of nighttime sequences in Green Book that benefit from the deeper blacks of the 4K image as well. Details are just slightly sharper, whites are slightly brighter, and skin tones are a little more natural. While film fans with 4K capabilities will certainly want to get this version of the movie, the fact is that you really can't go wrong with either the 4K for 1080p discs.

Universal has done the right thing here audio-wise and provided a featured English Dolby Atmos track on both the 4K and Blu-ray versions of this movie. And while this isn't the kind of Atmos track that one is going to use to show others the capabilities of the format, it is well done, with the kind of distinction and dynamic range that only Atmos can provide. There is a lot of music in Green Book - not just with the character of Shirley playing the piano, but with a litany of period songs filling up the soundtrack. The track also does a great job with separation and distinctness of sound, which is on display early in the movie's opening sequence – featuring Bobby Rydell (or, at least, as portrayed by actor Von Lewis) and an orchestra in the famed Copacabana nightclub.

Those wishing to know what this Atmos track provides in regard to the overhead height channels, the answer, unfortunately, is not a whole lot – at least in terms of what will be discernable to one's ears. One notable exception, however, is a sequence in which the characters of Tony and Don are driving at night in the rain. Here' the speakers envelop the viewer with the sound of steady raindrops, including those coming from above. I've heard a number of heavy thunderstorms via Atmos, but this scene is more of a steady rain than a storm, and the aural effect is quite nice.

In addition to the Atmos track, a 5.1 French DTS-HD Master Audio track is also available, as is a 2.0 English DVS (Descriptive Video Service) track. Subtitles are an option in English SDH, French, and Spanish. 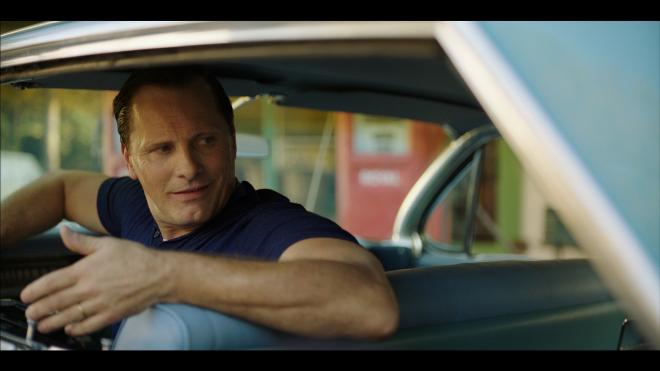 The bonus features listed below are contained on both the 4K and the Blu-ray disc. 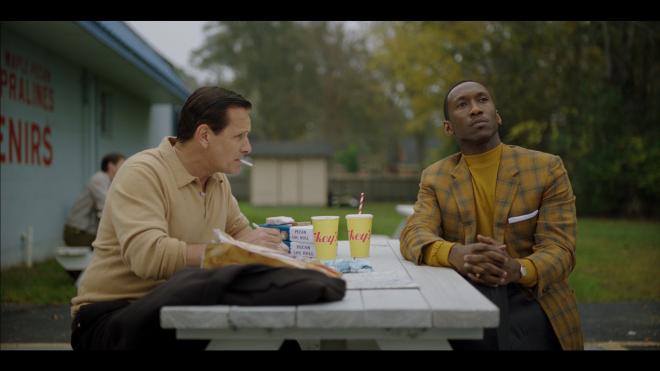 One of the rare Best Picture winners this decade that I feel confident in saying will still be watched and talked about a decade from now, Green Book is a wonderful movie that deals with serious historical issues but still remains wholly entertaining from beginning to end. While this 4K version isn't leaps and bounds better than it's Blu-ray counterpart, fans who want to own the best home video version of the movie will want to go UltraHD, while those who don't can rest easy knowing the Blu-ray version is equally strong. Highly Recommended.

Sale Price 14.99
List Price 22.98
Buy Now
3rd Party 14.97
In Stock.
See what people are saying about this story or others
See Comments in Forum
Previous Next
Pre-Orders
Tomorrow's latest releases