Eddie Redmayne returns in Fantastic Beasts: The Crimes of Grindelwald for another Newt Scamander adventure, but J.K. Rowling's original tales ultimately fail to capture the same magic as its predecessor. The latest entry charms Ultra HD with gorgeous 4K Dolby Vision HDR presentation and a satisfying Dolby Atmos soundtrack, but a small set of bonus features. Still, the overall UHD package is worth a look for both fans and those hungry for more HDR goodness. (We have also reviewed the Blu-ray HERE.)

With each entry to the Harry Potter saga, the franchise felt as though it was swelling and developing to a legendary epic, building towards a grand climactic showdown as every new story expanded and improved on the events of its predecessor. Sadly, the same can not be said of the new Fantastic Beasts series, lacking that same rigmarole that elevates a simple tale of good versus evil to the grandiose or into a romantic fantasy of yore celebrating heroic feats. In fact, The Crimes of Grindelwald fails to generate an atmosphere of the epic even though it's clear it wants to be seen that way. And while juggling several subplots at once, the central plot never quite makes clear the larger stakes at hand or the primary motivation driving a rather contradictory ensemble of characters. What precisely do the characters risk to lose in this battle? Are they fighting to preserve outdated, conservative traditions? (The Queenie-Jacob subplot comes to mind.) And whose heroic journey is this anyhow?

The failure to establish any of this early on is twofold, as the opening moments are essential in setting up a sense of direction and purpose. But director David Yates, whose involvement dates as far back as Order of the Phoenix and already entrusted with the next three installments, begins this follow-up with all the attention on Gellert Grindelwald (a surprisingly good Johnny Depp) as both a brief recap and a cold open showing the powerful wizard's dramatic escape. Back in London, Newt Scamander (Eddie Redmayne) is being disciplined for the events of the previous movie while also introducing a love triangle with Leta Lestrange (Zoë Kravitz) and his brother Theseus (Callum Turner) that pointlessly goes nowhere. But before launching this as substantial, it is immediately undermined by the forbidden love affair of Queenie (Alison Sudol) and Jacob (Dan Fogler) while also reminding audiences of Tina (Katherine Waterston), who is hot on the trail of Grindelwald. 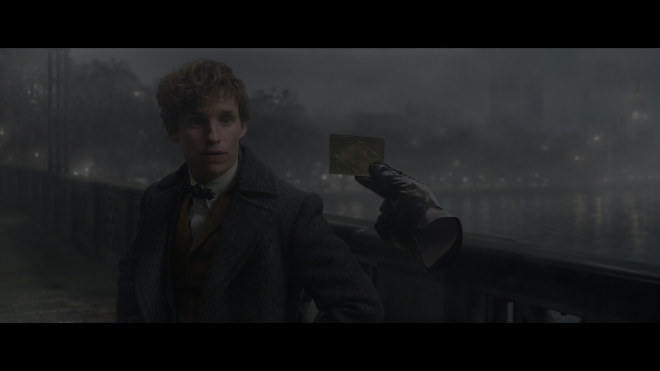 With so much going on right from the start, it's unclear for whom we're meant to cheer. By the end of the first act, the so-called villain is the only one working towards a specific, single-minded goal, and we're repeatedly told he's quite the charmer but never see it. Instead, the filmmakers continuously go that extra step to show Grindelwald is the story's ultimate baddie, be it by murdering families or manipulating Credence Barebone (Ezra Miller) into his cult. Everyone else pretty much spends the rest of the time scrambling to stop Grindelwald without ever explaining why or if they even understand what they're stopping. More mind-boggling is that Newt's involvement is primarily selfish — to reunite with Tina — but clumsily stumbles into this larger mess, lest we forget Dumbledore (Jude Law) is also somehow embroiled in all of it. And while the heroes are spectators in their own story, we suffer yet another pointless subplot with Yusuf Kama (William Nadylam) and eyeball worm.

Of course, The Crimes of Grindelwald is not without the sort of magical visuals expected of the franchise, littering the screen with enough CG spectacle to amuse and charm our attention to a somewhat lackluster conclusion. However, it's all for naught when the plot is so unfocused and trying desperately to shove so much into one movie because it's deliberately and knowingly working towards a surprise twist and as a setup for future sequels. J.K. Rowling is writing original scripts for this new saga of the Wizarding World, and I'm sure she has a goal in mind of where the series is going. But this second installment fails to give that impression, feeling instead like she's throwing ideas out there and seeing what sticks. Whereas the Harry Potter movies seemed to move upward, forward, slowly rising to a climax, the Fantastic Beasts franchise feels as though on a gradual decline, slipping downward to a toneless, bland and ultimately inconsequential finale.

Warner Home Video brings David Yate's Fantastic Beasts: The Crimes of Grindelwald to Ultra HD Blu-ray as a two-disc combo pack with a flyer for a Digital Copy. When redeeming said code via WB.com and Movies Anywhere, it includes the SD, HDX (1080p) and 4K with Dolby Vision and Dolby Atmos on various streaming platforms. The dual-layered UHD66 disc sits comfortably opposite a Region Free, BD50 disc, and both are housed inside a black, eco-cutout case with a glossy slipcover. At startup, viewers are taken to a generic static screen with usual options along the bottom and music playing in the background.

The wizarding world casts its charms on Ultra HD with the bewitching magic of a beautifully captivating HEVC H.265 encode, sure to mesmerize and delight even the most arrogantly doubting muggles, no-maj and the non–magique.

Shot on the Arri Alexa 65 camera system capable of 6.5K resolution and later mastered to a 4K digital intermediate, the freshly-minted transfer noticeably conjures sharper clarity and definition in practically every scene, mystifying viewers almost from the start. We can better make out the grimier deficiencies of Grindelwald's prison cell, the ornate features of the Thestral-drawn carriage and count every large tile of the sterile baroque halls at the Ministry of Magic. Individual hairs and the threading in the costumes are more distinct, and the various small objects decorating the background of many homes are plainly visible in the distance while facial complexions reveal every pore, wrinkle and negligible blemish with outstanding lifelike textures. However, the many CG animals and action sequences are slightly softer by comparison and the sharpest edges waver a tad in extreme wide shots.

Nevertheless, the more appreciable aspect in this 4K video comes by way of a notably improved contrast and brightness, which better compliments Philippe Rousselot's neo-noir-like cinematography. While it may not be quite as impressive as the first Fantastic Beasts movie on UHD, the video nonetheless materializes significantly crisper, more resplendent whites while specular highlights often radiate with a spellbinding glow. Every magical spell cast from a wand comes with a dazzlingly beaming flash, and the various lamps have a narrow incandescent glow that doesn't ruin from the sharper aspects. However, the climactic confrontation when Grindelwald surrounds himself in blue flames, the hottest areas are sadly so intense they tend to bloom enough to whitewash the finer details.

Also, black levels are remarkably richer and bleaker with distinct gradational differences in the various shades and clothing. The action is continuously bathed in inky, velvety shadows that maintain superb visibility and provide the 2.39:1 image with a lovely cinematic appeal. Despite Rousselot's almost-monochromatic cinematography, the Dolby Vision HDR presentation showers the action with sumptuously rich primaries, especially those falling within the red spectrum. Some of the magical blasts from wands glow an enthusiastic candy rose and various articles of clothing show a deeper, more crimson shade. Meanwhile, the true-to-life yellows in many interior scenes are full of warmth while the fiery, passionate oranges of the creature spells turn the Circus Arcanus sequence and Grindelwald's fire curse into stunning eye candy. Although largely limited, secondary hues nonetheless appear richer, more full-bodied, affording better, more accurate skin tones. (Video Rating: 88/100)

The war against the muggle world conjures an enchantingly charming Dolby Atmos soundtrack that'll have everyone waving their wands at the screen.

Interestingly, for a wildly imaginative fantasy adventure such as this, rear activity is surprisingly reserved and somewhat moderate compared to its predecessor. That's not to suggest there is something wrong with the track because it is still enjoyable, especially during the many action sequences, which is to be expected. The effects discretely pan between the surrounds and encircle the listening area effectively, and some of that activity occasionally travels overhead with the Circus Arcanus sequence and the climactic cemetery finale providing some demo-worthy moments. However, the entire system suddenly falls silent in quieter, dialogue-driven moments, even when those same moments take place outside in the middle of a busy, crowded city ultimately failing to create a convincing and consistent hemispheric environ.

The design's strongest and best feature is the broad and spacious soundstage, layered with a plethora of background activity that fluidly moves across the three front channels and into the top heights, generating a highly-engaging half-dome soundstage. Imaging exhibits precise distinction within the mid-range, revealing clean separation and clarity in the orchestration. In fact, James Newton Howard's score displays superb warmth and acoustical detailing while also bleeding into the surrounds and heights. Amid the loud, wizarding chaos on screen, vocals remain well-prioritized and always intelligible. The low-end, on the other hand, could be stronger and more powerful, but bass is nonetheless weighty and still potent enough to energize the room on a few occasions.  (Dolby Atmos Audio Rating: 82/100)

All the bonus features are available only on the accompanying Blu-ray disc.

Director David Yates and author J.K. Rowling return to the Wizarding World once again in Fantastic Beasts: The Crimes of Grindelwald, another entry in the Newt Scamander prequel adventures. Without a printed source to work from, Rowling conjures an original tale meant to expand the Harry Potter universe, but the plot fumbles about trying to keep one too many spells and charms in order, ultimately failing to capture the same magic as its predecessor. The second installment to the new series enchants Ultra HD with a gorgeous 4K Dolby Vision HDR presentation that improves on its HD SDR counterpart, complemented by a generally satisfying Dolby Atmos soundtrack. Although the set of supplements are relatively small, they are nonetheless informative and entertaining, making the overall UHD package worth a look for both fans and those hungry for more HDR goodness.

Sale Price 21.04
List Price 41.99
Buy Now
3rd Party 13.99
In Stock.
See what people are saying about this story or others
See Comments in Forum
Previous Next
Pre-Orders
Tomorrow's latest releases