Although sleep-inducing and ultimately unmemorable for adults, Dr. Seuss' The Grinch is nonetheless the perfect sleigh ride to usher in the Christmas spirit for the little tykes in the family. The Grinch brandishes his evil grin and steals Ultra HD with a great-looking 4K Dolby Vision HDR presentation, an excellent Dolby Atmos soundtrack, and a decent set of supplements. The overall package is Worth a Look for UHD collectors, in general, and Recommended for the movie's fans. (We have also reviewed the Blu-ray.)

Dr. Seuss' The Grinch heralds a pivotal but also heavily concerning moment in the history of this movie lover. The new animation feature from Illumination marks the very first time I have ever fallen asleep at the cinemas, which is something completely unheard of for me and totally out of character, no matter how boring or bad the movie. And so, the mind races through various possibilities for explaining this odd behavior, with the first and most immediate option being I may finally reached that age when this could actually be the new norm. I'm an old man! Of course, the more youthful and playful side of me refuses to accept such nonsense because falling asleep at a movie is only what a crotchety old Grinch would do. I'm still young enough to enjoy a silly animated holiday film with my family, to partake in the laughter of the juvenile, madcap zaniness. The only other logical possibility then must be the movie is so drearily dull that it managed to lull me to sleep instead of laugh.

Sadly, I think that is the most likely culprit. As heartbreaking as it is to report — again, because it almost makes me feel old — The Grinch is frankly mind-numbingly boring and a chore to sit through. Of course, if judging by the wide-eyed faces and joyous laughter of my little niece and nephew — the true target audience — with whom I watched the movie, this ranks as one of the best and funniest films of 2018. (Yeah, I'm definitely old.) Being a lifelong fan of Dr. Seuss' classic children's story, I half expected to be, at least, mildly amused by its latest adaptation from the same studio that also gave us The Lorax — another Dr. Seuss favorite — and the Despicable Me franchise. As it turns out, there are only so many times the same story can be retold before it suddenly falls flat and tedious, and for poor, old Grinch, that magical number is three. The third time is definitely not as charming, failing to add anything new to the material — aside from the characters — or offer any surprises. 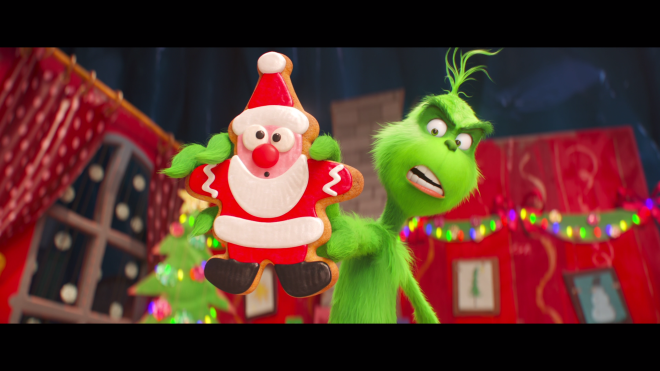 The 1966 animated short with horror icon Boris Karloff providing the voice of the eponymous miscreant has evolved into a holiday staple and continues to be just as delightfully amusing as ever. The Ron Howard live-action adaptation can excite the yuletide spirit while appreciating the stage production and Jim Carrey's exaggerated portrayal, but the movie is ultimately an unexceptional and pedestrian effort. For this latest bid to steal the holiday movie-watching season, Benedict Cumberbatch steps into the green furry role with a conniving, mischievous grin, but all smiles soon fade away after the first half hour of his placidly soothing, non-threatening voice inducing yawns and drowsy eyes. Normally, the actor is a pleasure to watch with excellent comedic timing and delivery. However, divorce the voice from the actor, and suddenly, Cumberbatch is a flat, monotone and unmemorable caricature of an otherwise distinctly unique and idiosyncratic character.

The filmmakers try to counter this unfortunate sleep paralysis effect with a small host of new and far more lively residents of Whoville. Cindy Lou (Cameron Seely) is a familiar Who from the original children's book, but she's joined by her much-too adorable gang of Who-tykes in a plot to catch Santa Claus and an overworked single mother (Rashida Jones) that inspires the true meaning of the holiday spirit. Of the entire film, however, Kenan Thompson's Bricklebaum provides arguably the funniest bits as that one exceedingly ebullient neighbor who always goes overboard with the Christmas decorations. But outside of such mildly delightful moments — I enjoyed Bricklebaum's dog clash with the Grinch — directors Yarrow Cheney and Scott Mosier adhere to the well-known story with predictable efficiency. For the parents raised on the previous two adaptations, this makes for a snore-fest while the kids relish in the festive silliness. Then again, what do I know? I'm an old man who falls asleep at the cinemas apparently.

Universal Studios Home Entertainment brings Dr. Seuss' The Grinch to 4K Ultra HD Blu-ray as a two-disc combo pack with a Digital Copy code. When redeeming said code via Universal's website or Movies Anywhere, users have access to the 4K Dolby Vision version with Dolby Atmos audio. The triple-layered UHD100 disc sits comfortably opposite a Region Free, BD50 disc inside a black, eco-elite case with a glossy, embossed slipcover. At startup, the disc goes straight to a screen with options in the top left, full-motion clips and music.

The Grinch steals the holiday spirit from Ultra HD with an excellent and occasionally jaw-dropping HEVC H.265 encode, offering fans a welcomed but ultimately slight upgrade over the Blu-ray. Considering the movie was likely rendered at 2K resolution, the upscaled UHD transfer is really not any sharper although the small uptick in overall definition is nonetheless appreciated. The animation remains extraordinary to behold, exposing the most minute decoration and item within every nook and cranny. While the tiniest feature in the rock formations of the mountaintop and cave are distinct, some of the elaborate details of Whoville and the tree decorations can suddenly appear soft from certain distances and a tad noisy along the sharpest edges. In close-ups, the hair of various characters remains well-defined and lifelike while the individual needles of pine trees and the realistic powder-like snow everywhere provide a few bits of demo-worthy eye-candy.

A better and far more appreciable upgrade is the gorgeous parade of colors, bursting from the screen with jaw-dropping opulence. The Dolby Vision presentation provides some subtle and nuanced differences in the primaries, such as Grinch's scruffy, wooly body, which now shows a neon chartreuse shade in his undercoat while the rest is a brilliant-but-still-sickly emerald green. Blues are slightly fuller with some welcomed variation between the ice, sky and the lights. The same goes for reds except they also tend to come off oddly exaggerated and over-saturated in a few sequences, such as when lighting the Christmas tree. Secondary hues, on the other hand, appear more resplendent and sumptuous with better diversity between the true-to-life yellows and fiery oranges. Some of the best moments are the mesmerizing sunset scenes bathing the screen with cotton-candy pinks, radiant violets, and marigold oranges before blending into the indigo blues of the night sky.

Contrast doesn't show a significant difference from its HD SDR counterpart, but admittedly, the small jump is enough to give the 4K video a more jovial feel overall. Whites remain crisp and brilliant while showing some attractive gradual variation between the snow, buildings, and clothing. Specular highlights offer a more appreciable improvement, however trivial it may be, making the individual ice crystals sparkle a bit more intensely in the sunlight, revealing better detailing in the powder of the snow and the fluffy clouds, and giving metallic surfaces an eye-catching polish. Brightness levels remain about the same, which is not a bad thing since blacks were already inky rich and luxurious, providing the 2.35:1 aspect ratio with a lovely cinematic appeal and dimensionality. On the other hand, there is a tad better detailing within the darkest, deepest shadows, making this 4K HDR version the preferred way for enjoying the movie with the whole family. (4K Video Rating: 84/100)

The holiday blockbuster debuts with an excellent Dolby Atmos soundtrack that won't exactly push one's audio system to its limits, but it nonetheless complements the visuals to satisfying effectiveness.

The front-heavy design establishes a wide and splendidly spacious soundstage, as the action moves between the three channels fluidly and into the off-screen space. Imaging exhibits extraordinary clarity and detailing during the loudest, high-piercing segments, allowing for the crunch of snow to be perfectly heard while maintaining distinct, precise intonation and pitch in the various voices. For a majority of the runtime, the low-end understandably falls in within the mid-bass range, but occasionally, it will faintly dig a little deeper in a few unexpected spots. Danny Elfman's score enjoys plenty of warmth and fidelity while lightly bleeding into the surrounds and the top heights, creating an amusing, highly-engaging half-dome effect.

For a zany and wacky animated film such as this, rear activity is surprisingly limited and confined to the on-screen action. From time to time, a few atmospherics are employed, such as the local wildlife in the distance or when characters are seen sledding through trees or do down the mountain slope. The same can be said of the height channels, as a few of those scattered effects travel above the listening area. Admittedly, such instances flawlessly pan between the speakers and are appreciable, but they also tend to draw attention to themselves while failing to generate a genuinely convincing hemispheric soundfield. Setting those gripes aside, however, the object-based mix is ultimately plenty enjoyable for the little ones in the family. (Dolby Atmos Audio Rating: 84/100)

The same set of supplements can be enjoyed on both the Ultra HD and Blu-ray discs.

For the parents and family members dragged into cinemas forced to sit through the third adaptation of the classic children's book, Dr. Seuss' The Grinch is a sleep-inducing chore offering nothing worthwhile or memorable. However, for the little tykes ready to welcome the holiday season, the surprise box-office smash is the perfect sleigh ride to usher in the Christmas spirit. The Grinch brandishes his evil grin and steals Ultra HD with a great-looking 4K Dolby Vision HDR presentation, gifting fans a nice improvement over the Blu-ray while porting over the same excellent Dolby Atmos soundtrack. With a decent but still average set of supplements, the overall package is worth a look for UHD collectors and recommended for fans.

Sale Price 19.97
List Price 29.98
Buy Now
3rd Party 12.98
In Stock.
See what people are saying about this story or others
See Comments in Forum
Previous Next
Pre-Orders
Tomorrow's latest releases