Like baseball, apple pie and the Fourth of July, It's a Wonderful Life is an American institution. And now, the classic tale of a simple man who's rescued from the brink of suicide by his guardian angel and shown how his seemingly meaningless existence has touched, influenced, and enhanced countless other lives at last can be seen in the splendor of ultra-high-definition. In Dolby Vision HDR and with lossless audio, director Frank Capra's beloved film looks and sounds better than ever before. The vibrant, razor-sharp, yet wonderfully filmic picture and crystal clear, full-bodied sound help this edition of It's a Wonderful Life render all previous home video versions obsolete. Treat yourself to an early Christmas present and enjoy this holiday classic all season long. Must Own.

"No man is a failure who has friends."

It's a simple yet powerful statement, and no film expresses the sentiment more eloquently or emphatically than director Frank Capra's perennial holiday classic, It's a Wonderful Life. The world's best known and probably most popular Christmas movie never fails to infuse viewers with seasonal spirit and produce a sizable lump in the throat - if not a torrent of tears - no matter how many times we've seen it. (I told myself I wasn't going to cry when I watched the film for the umpteenth time a few days ago, but my steely resolve crumbled during the supremely emotional final scene.) Sure, the yuletide setting slathers on an extra layer of schmaltz, but the story's universal message of selflessness, generosity, caring, and kinship plays well any time of year...and never gets old.

Familiarity, they say, often breeds contempt, but not in the case of It's a Wonderful Life. Though annual viewings may have rubbed some of the bloom off this Hollywood rose and spawned a cynical backlash, it's tough to watch Capra's film without being drawn into the quaint, homespun world of Bedford Falls and absorbed by the colorful, affecting characters who reside there. And unless your heart is made of stone, it's downright impossible to escape the onslaught of honest feeling that pervades this heartwarming – and I mean that in the best and truest sense of the word – motion picture.

George Bailey (James Stewart) is a man in crisis. Having sacrificed his own dreams and ambitions to shoulder the burden of his family's business (an altruistic building-and-loan that has helped countless town residents buy their own homes, but never yielded much of a profit), George reaches the end of his rope one Christmas Eve when his absent-minded Uncle Billy (Thomas Mitchell) misplaces several thousand dollars while a bank examiner is auditing the company's accounts. With no way to recover the funds or get a loan to cover the deficit, George – who fears the ensuing scandal might send him to prison and make him unable to provide for his wife (Donna Reed) and four children – questions the value of his existence and wonders whether he's worth more dead than alive. Enter Clarence (Henry Travers), a second-class angel (that's right, angel) with "the IQ of a rabbit and faith of a child," who's sent back to Earth to show George how intensely he's impacted and benefited others during his time on the planet, and how he shouldn't be so quick to throw away the precious gift of life. If he succeeds in bringing George back from the brink, Clarence will earn his wings and the Bailey family will be saved. 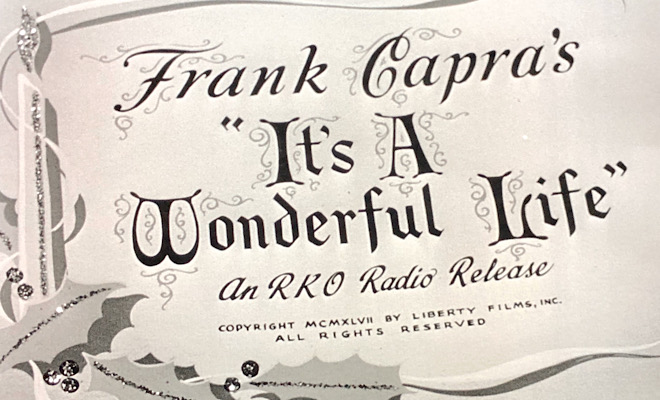 Capra's film has been copied, imitated, and lampooned to death over the years, and it's easy to see why. The inspired story takes a unique tack as it examines how one person's influence ripples across a broad spectrum of human experience, and seemingly insignificant acts can alter not just our own lives, but also the lives of those close to us and even people we've never met. And the realization of that fact, especially when applied to our own existence, produces a powerful sense of euphoria that easily gives way to tears.

Still, without the film's dark, searing elements – ruthless greed, personal and corporate manipulation, and a longing to reject the rigid rules of society and indulge one's own fantasies – such an emotional catharsis would not be possible. The reason It's a Wonderful Life resonates so strongly is that at one time or another we've all felt like George – burdened, trapped, unable to shoulder the weight of work and family, unsure we'll ever catch a decent break, live up to our potential, or achieve what we believe to be our destiny – all the while taking the many blessings bestowed upon us for granted. In the final analysis, it's those little things, like Zuzu's petals (if you've seen the film you know what I'm referring to), a smile from a spouse, a loving environment, and friends who care that make life worth living…and cherishing. 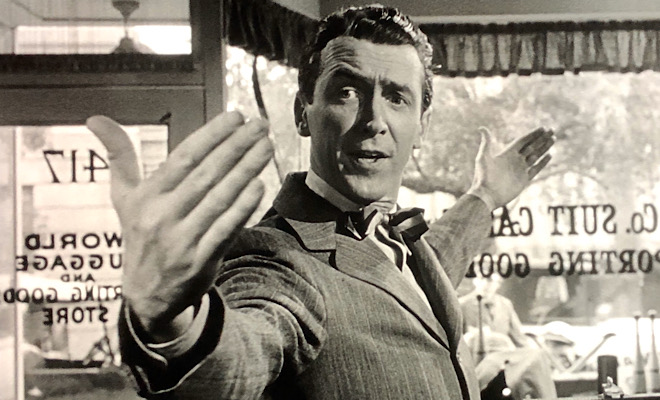 Without question, Capra was one of Hollywood's finest Golden Age directors, but his often preachy, heavy-handed style earned him a reputation as a shameless sentimentalist. Yet despite the rivers of emotion flowing through It's a Wonderful Life, the movie really can't be called corny, thanks to its well-balanced presentation, exceptional script (by the excellent husband-and-wife team of Frances Goodrich and Albert Hackett), and memorable performances. Stewart, in his first post-World War II role, exhibits a newfound depth and rawness that incisively lays bare the turmoil ripping George to shreds. It's a natural, nuanced, and dimensional portrayal, and Stewart makes it impossible to imagine anyone else in the part.

Reed is perfect as the perfect wife – level-headed, loving, protective, strong, and devoid of any insipid Stepford qualities movie spouses often exhibited during that period. The cuddly Travers brings incomparable innocence and whimsy to his lovable guardian angel, while Lionel Barrymore audaciously overplays the devious, Scrooge-like magnate Mr. Potter, whose delicious nastiness ultimately heightens our emotional response when George overcomes his cruel manipulations. Superb supporting work from such unsung players as Thomas Mitchell, Beulah Bondi, Gloria Grahame, and H.B. Warner enhances the movie immeasurably and helps foster our intimate bond with it. Though strangely not a box office success at the time of its release, It's a Wonderful Life justly deserved its Academy Award nominations for Best Picture, Director, and Actor.

Long after we're all dead and gone and possibly acting as guardian angels for other George Baileys, It's a Wonderful Life still will be captivating legions of viewers and remaining an essential cog in the seasonal cinematic wheel. Imitators will come and go, but Capra's original film is bullet-proof, a timeless classic that deserves to be played and revered on an annual basis, if for no other reason than to remind all of us that we have wonderful lives, too. 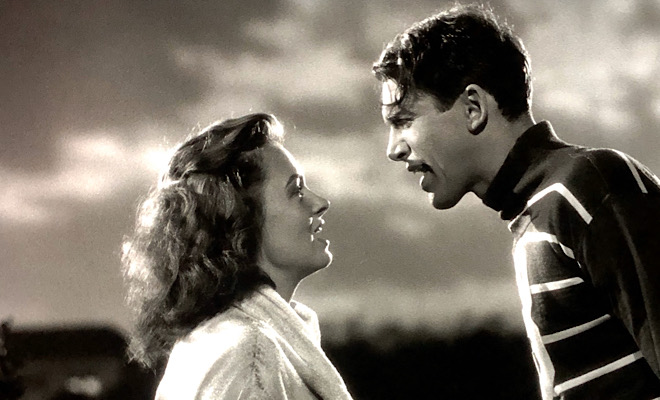 It's a Wonderful Life arrives on 4K UHD packaged in a standard case inside a sleeve. A Blu-ray disc that houses a colorized copy of the film, along with a leaflet containing the digital copy code are tucked inside the front cover. Video codec is 2160p/HEVC H.265 and audio is Dolby TrueHD mono. Once the disc s inserted into the player, the static menu without music immediately pops up; no previews and promos precede it.

It's a Wonderful Life joins The Wizard of Oz in the 4K UHD realm, making it a great autumn for classic film aficionados hungry - make that ravenous - for more ultra-high-def upgrades of Hollywood's legendary Golden Age movies. Both releases prove even the most antique motion pictures can look jaw-droppingly gorgeous in 4K UHD. Though three-strip Technicolor really pops in Dolby Vision HDR, good old black-and-white film stock can look pretty darn spectacular in the format, too.

It's a Wonderful Life has never looked better than it does here. Paramount has done a superior job with this 2160p/HEVC H.265 transfer, which was sourced from the film's original nitrate negative, as well as two second generation nitrate fine grains. (For more information on the source material and restoration, see the supplements section below.) Any print damage, tears, fading, scratches, and instability have been meticulously repaired, and the result is a stunningly clean, vibrant image that features dazzling contrast and clarity, a wonderfully modulated gray scale, and a palpable sense of depth. Background elements that were fuzzy in the past are now beautifully discernible, lending Bedford Falls and later Potterstown a much richer atmosphere. Just the right amount of grain provides essential texture, but it never overwhelms the picture. Despite the extensive restoration and boost in clarity, It's a Wonderful Life still looks incredibly filmic, which is probably the greatest compliment I can pay this very satisfying transfer.

Deep, inky blacks starkly contrast with the bright white snowscapes to create striking scenarios. Pouring rain and falling snow are marvelously clear, as are the hollyhocks in Mary's front yard, the grooves on a shellac record, costume patterns, fabric weaves, and bric-a-brac. Shadow delineation is excellent and close-ups, whether gauzy or realistic, render fine facial features quite well.

Because a secondary source had to be employed to replace missing and damaged elements in the original negative, there are a few moments of slight softness here and there. Thankfully, those moments are fleeting and only momentarily distract from what otherwise is a miraculous presentation. Whether you watch It's a Wonderful Life in Dolby Vision or HDR, you are guaranteed a memorable viewing experience. It's hard to make a beloved classic that everyone has seen dozens of times look and feel brand new, but Warner Home Video did it with The Wizard of Oz and Paramount Home Video has done it with It's a Wonderful Life. Hopefully, both studios will continue this noble work and other studios will follow suit. This is our film heritage, and it deserves to be preserved in the finest possible format.

For the first time, It's a Wonderful Life is presented with lossless audio, and the Dolby TrueHD mono track Paramount supplies sounds robust and full-bodied. A wide dynamic scale handles all the highs and lows of Dimitri Tiomkin's music score without a hint of distortion, and all the priceless dialogue is clear and easy to comprehend. Sonic accents like gunfire, fisticuffs, and shattering glass are crisp and distinct, while atmospherics such as street noise and pounding rain make more of an impression without overwhelming the on-screen action. Bass frequencies are solid, and as in previous home video editions, no hiss, pops, or crackle intrude. This lossless track remains true to its source, but adds just enough extra clarity and depth of tone to make it a welcome addition to this release.

Aside from the standard Blu-ray disc that features a colorized version of It's a Wonderful Life, a selection of all-new supplements enhance this 4K UHD presentation.

It's a Wonderful Life remains one of Hollywood's most heartwarming, inspirational, and emotional films, and in the splendor of 4K UHD and Dolby Vision HDR this cinema antique looks almost brand new. Few movies engender such unabashed affection or appeal to such a wide-ranging audience, and this 4K UHD edition makes this beloved movie more immediate and accessible than ever before. It's a Wonderful Life has endured scads of subpar home video releases over the years, but with exceptional video and lossless audio Paramount elevates this Frank Capra classic to new heights. Whether you watch it every Christmas or whenever you need a spiritual pick-me-up, this is another essential American film that demands a spot in your 4K UHD collection. Must Own.