Starring Jaime Foxx and Gerard Butler, Law Abiding Citizen is an action crime thriller lacking both thrills and action but imprisoned in an implausible plot. The movie evades the law on 4K Ultra HD Blu-ray with the help of an unexceptional 4K Dolby Vision HDR presentation, a better Dolby Atmos soundtrack, and porting over the same set of bonus features. The UHD package ultimately fails to make much of a case to warrant an upgrade. Unless you're a hardened fan, this is an open-and-shut case of Skip It.

Infusing social commentary with an action thriller storyline, F. Gary Gray (The Fate of the Furious, Straight Outta Compton) keeps Law Abiding Citizen grounded, despite having one of the most outlandish and eccentric plots in Gerard Butler's filmography, which is saying a lot. The talented director maintains interest and decent entertainment value with some creative visual flare, even as viewers question the credibility of the narrative — and its characters — and the plausibility of some of its more exaggerated action sequences. The introduction of smarts in a pic that really should remain brainless can be a bit cumbersome, but at least, it works in providing the main protagonist with a sympathetic motive.

Butler stars in the role of good, law-abiding citizen Clyde Shelton, an engineer forced to witness the brutal deaths of his wife and daughter. When the two men responsible for the heinous crime are presumably brought to justice, the young deputy D.A., Nick Rice (Jaime Foxx), shows more concern for his 96 percent conviction rate than for bringing comfort to the distraught husband and father. Fearful that sloppy forensic evidence will set both murderers free, Rice makes a deal with the criminal responsible for the massacre by reducing his sentence while the other receives capital punishment. This doesn't sit too well with Shelton, and he waits ten years before finally serving his own personal form of justice to everyone.

Essentially, as a vigilante/revenge flick, the movie offers some good tension and delivers some explosive action. The filmmakers give Law Abiding Citizen a dark and brooding appeal which suits the subject matter. And like the films it subconsciously imitates, such as Death Wish and Sudden Impact, the audience not only identifies with Shelton, the surviving mourner, but also cheers and almost applauds his severe tactics, in spite of how gruesome and violent they may be. Gray shows a strong and capable eye in these instances, instilling the thriller with a disapproving observation on the current state of our justice system. Especially worth noting early in the film is the juxtaposition of a joyful school recital and the strange spectacle surrounding the death penalty. 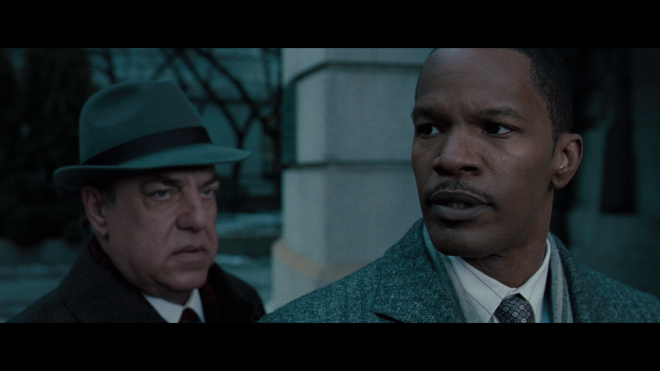 Where we run into trouble is the heavy-handedness of the narrative's condemnation of modern law and the ease by which Shelton can unfold his master plan. The word justice is used just as often as the F-word, and by the end, it's not exactly clear how the scales are balanced. And similar to the scene mentioned above, Butler and Foxx are given ample time to talk in a superficial level — always opposite each other on screen — on matters of law while enclosed in a large, emotionless panoptical room. Meanwhile, Butler's Shelton just so happens to be a very skilled mercenary with enough resources to pull off one of the most contrived and intricate revenge schemes ever filmed. By the way, he also seems to display some impressive psychic — or psychotic, whichever works best in a given scene — abilities, always knowing where government officials will be at the precise moment he needs them to scare the citizens of Philadelphia into hysteria.

If not for Gray's direction, the film's plot would completely fall apart. While Foxx has delivered some memorably impressive performances ranging from drama The Soloist and Ray to uniquely imaginative action flicks Django Unchained and Baby Driver, Butler, arguably-speaking, does some of his best work and actually outshines the Oscar-winning actor. From Dracula to treasure hunter and from The Phantom of the Opera to king of the Spartans, the gifted Scotsman has been seen in a large variety of roles, but here, we see him at his most human and vulnerable. Too bad it also feels somewhat wasted in a forgettable thriller that relies heavily on a convoluted and preposterous twist ending. Sure, Law Abiding Citizen is entertaining, but the perfectly calculated and by-the-numbers plot also makes it unremarkable and unmemorable.

Lionsgate Home Entertainment brings Law Abiding Citizen to 4K Ultra HD Blu-ray as a two-disc combo pack with a flyer for a Digital HD Copy, which can be redeemed via MovieRedeem or through VUDU but, at this time, is only available in HD SDR or HDX with 5.1 Dolby Digital audio. Inside a black, eco-cutout case with a glossy slipcover, the triple-layered UHD100 disc, featuring the 109-minute theatrical cut, sits comfortably opposite a Region A locked, BD50 disc, which is identical to the original Blu-ray release containing the 118-minute Director's Cut and the same set of special features. At startup, the disc goes straight to the standard menu screen with the usual options, full-motion clips, and music playing in the background.

Gray's crime thriller tries to obey the laws of Ultra HD but only ends up being arrested for an average and unexceptional HEVC H.265 encode. Originally shot on 35mm film but likely upscaled from a 2K digital intermediate, it's not terribly-looking or outright disappointing, but the picture ultimately shows very little improvement over the Blu-ray. Although largely consistent and stable, the 2160p transfer fluctuates from strong, good definition to poorly-resolved, offering a mild uptick depending on the scene. While close-ups show great lifelike complexions in the cast, wider and extreme long shots of the city and prison scenes don't look significantly better than its HD SDR counterpart.

Likewise, overall contrast doesn't enjoy much of an upgrade either, exhibiting whites that appear ordinary but passable, just bright enough to be vivid but lacking the sort of specular highlights expected of the HDR format. Of course, this can be excused or forgiven as the result of Jonathan Sela's deliberately stylized photography, which heavily mutes contrast to give the story a gray, overcast feel.

Along those same lines and considering the creative intentions of the filmmakers, the Dolby Vision presentation also feels considerably limited due to a heavily subdued and drained color palette. Primaries, however, are appreciably richer and better saturated, especially the blues and reds, but secondary hues sadly don't show much variation though the two explosion scenes are notably more dynamic and dazzling with an eye-catching orange radiance. Black levels, on the other hand, offer the best and most noteworthy upgrade, providing the 2.40:1 image with silkier, velvety shadows and excellent dimensionality. There are moments of mild crush in the darkest, murkiest corners.

In the end, the few visible positives are sadly not enough to make this UHD a worthy upgrade. (4K HDR Video Rating: 64/100)

On the audio side of things, the movie runs from the law with a great and generally satisfying Dolby Atmos soundtrack, offering a few notable enhancements to an already-excellent Dolby TrueHD lossless mix. As mentioned in the Blu-ray review, the surround speakers don't maintain a consistent soundfield and there isn't a particular enveloping moment that's memorable or worth mentioning. But the design, thankfully, comes with just enough activity along the sides to occasionally feel immersive, and some of those atmospherics now travel into the ceiling speakers with relatively pleasant effectiveness. The sound of a helicopter flying overhead and the angry yells of prisoners are notably more convincing and with a better sense of directionality.

However, the track benefits best along the front soundstage. The extra breathing room allows for a wider, broader presence, as various effects discretely and fluidly pan across the screen and into the top heights, generating an engaging half-dome wall of sound. The mid-range also feels a tad sharper and cleaner, exhibiting excellent detailing and fidelity in Brian Tyler's score and the couple action sequences. Being a heavily character and dialogue-driven movie, vocals are distinct and precise throughout, and although the low-end isn't especially standout or noteworthy, bass is nonetheless powerful enough to provide some weight to the action. (Dolby Atmos Audio Rating: 76/100)

The same set of features are ported over from the Blu-ray and shared on the Ultra HD disc.

From talented director F. Gary Gray, Law Abiding Citizen stars Jaime Foxx and Gerard Butler. The action thriller has its moments of entertainment, but its unbelievably implausible plot ultimately makes it unremarkable. The film evades the law on 4K Ultra HD Blu-ray with the help of a rather unexceptional Dolby Vision HDR presentation, but it's saved by a largely satisfying Dolby Atmos soundtrack. Featuring the same set of bonus features as before, the overall package ultimately fails to make much of a case to warrant an upgrade. Unless you're a hardened fan of the movie, this is an open-and-shut case of Skip It.

Sale Price 14.96
List Price 22.99
Buy Now
3rd Party 10.11
In Stock.
See what people are saying about this story or others
See Comments in Forum
Previous Next
Pre-Orders
Tomorrow's latest releases