Catherine Hardwicke's adaptation of Stephenie Meyer's Twilight is, all honesty, a terribly bad teen romance attempting to sell a fantasy love affair in the most mawkishly absurd story about vampires. The bad acting and laughable dialogue ultimately make it a comedy, not a romance. The movie celebrates its 10th Anniversary on 4K Ultra HD Blu-ray with a generally satisfying Dolby Vision and Dolby Atmos presentation offering a small step up over the Blu-ray. With only one new supplement, the overall package is nonetheless Recommended for hardened fans.

Despite all the bashing and general loathing for all things Twilight, I must admit to enjoying a somewhat masochistic fascination for Catherine Hardwicke's adaptation of Stephenie Meyer's insanely popular book of the same name. For me, the film is not a teen fantasy romance or a supposedly clever reimagining of Shakespeare's Romeo & Juliet. It's a hilarious comedy! I mean, really, who can literally take the scene of Bella Swan (Kristen Stewart) walking into her classroom on her first day of school seriously? Her hair blowing in the air by the industrial-sized fan is as stalely clichéd as it can be imagined, made all the more hysterical when seeing Edward Cullen (Robert Pattinson) gagging at the sight and scent of her. As if that weren't enough, their supposed romance "blossoms" in a span of one conversation, stirred by goofy stares, and when characters speak, they spout absurdly hackneyed dialogue built around the schmaltziest, most banal delusions about love.

In essence, Twilight is a hugely understated, sickly twisted black comedy about an emotionally abusive relationship between a gullible teen with a limited vocabulary and an unhealthily pale hundred-year-old man with the most bizarre skin condition ever devised in the annals of fiction. My interest in the series, which admittedly is an academic preoccupation, is the cultural reaction to a plot portraying a blatantly toxic and mentally harmful relationship as an admirable love affair. Granted, Meyer's fairy tale is basically an allegory for abstinence, inspired by the author's religious convictions. This becomes apparent when considering Edward is a vampire, an iconic conventional figure emblematic of unchecked and uninhibited sexuality, fighting his baser, instinctual urges. Unfortunately, the character seems to express this self-inflicted constraint as anger issues and creepily obsessive to the point of possessive, easily annoyed and somewhat aggressive with Bella when she doesn't behave to his expectations. Of course, I never take any of it as serious since the acting and dialogue is laughably horrendous, an eye-rolling, comical teen romp. 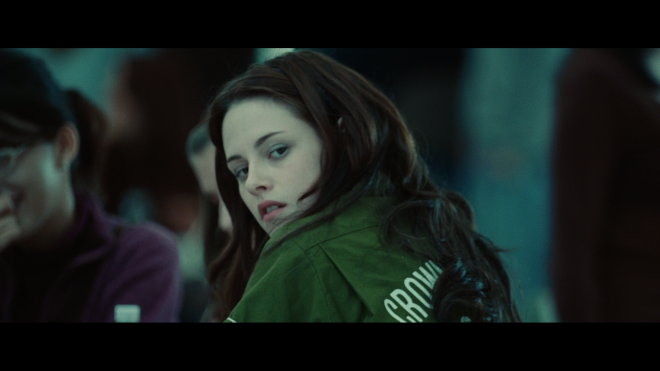 Lionsgate Home Entertainment brings Twilight to 4K Ultra HD Blu-ray as a two-disc combo pack with a flyer for a Digital HD Copy, which can be redeemed via MovieRedeem.com but likely available in HD SDR with 5.1 Dolby Digital audio. The triple-layered UHD100 disc sits comfortably opposite a Region A locked, BD50 disc inside a black, eco-vortex case with a glossy slipcover. The Blu-ray appears to be the same disc from the 2009 special edition release, as it features the same set of bonus material and screen menu At startup, the UHD goes straight to a static menu screen of the cover art with music playing in the background.

Ten years later and a clan of vegetarian bloodsuckers tries to take a bite out of Ultra HD with a good but not particularly impressive HEVC H.265 encode. In fact, one would be hard-pressed to quickly note where the movie benefits compared to the Blu-ray, especially since it would seem the transfer has been upscaled from a 2K digital intermediate. This is not to say viewers won't note an uptick in definition and steady resolution levels. In fact, there is plenty of strong detailing in the hair and clothing, and background information is plainly visible and fairly distinct for a majority of the runtime. However, it's not a significant or noteworthy jump with many scenes looking more like an upscaled Blu-ray, and this is especially true of the Bella and Edward conversations in the forest where the cheesy CG imagery is more apparent. Then again, all the visual effects throughout are cheesier and more obvious in the higher resolution, making the so-called romance all the more hackneyed and schmaltzy.

Then there is Elliot Davis's heavily stylized, orange-teal cinematography greatly limiting the contrast while boosting the brightness levels, making for a considerably dark and monochromatic 4K video. This makes for a substantially somber and morose atmosphere that aligns with the overcast weather of the Northwest, giving fuel to the argument the transfer perhaps being faithful to the creative intentions of the filmmakers. On the other hand, whites are duller and lackluster while a shortage of specular highlights never provide the picture with the sort of energetic pop we've come to expect of the format. In point of fact, the brightest spots tend to lightly bloom and wash over the finest details, such as within lightbulbs or car headlights. There is little to almost no detailing in the clouds, and the light shining off wet surfaces are more of a glare than a realistic, glistening shine, likewise, the movie's infamous sparkling vampires don't dazzle or twinkle as much as radiate in white.

On a more positive note, the Dolby Vision presentation is awash in remarkably inkier, swarthier blacks in the hair and clothes. Compared to the HD SDR counterpart, nighttime and poorly-lit scenes are flooded with darker, velvety shadows without sacrificing any of the finer details to the darkest corners, providing the 2.40:1 image with appreciable dimensionality and a lovely cinematic appeal. At the same time, Davis's photography makes a considerably darker and gloomier picture quality, even in scenes where it doesn't feel appropriate, such as Waylon Forge's death. Also, this significantly limits the overall color palette with a greater emphasis on teal blues, significantly sacrificing the secondary hues while markedly muting the primaries. Thankfully, greens nonetheless display a good deal of life and vibrancy in the many exterior scenes. Meanwhile, reds come in a slightly wider selection of shades, from the bright tomato cherry of the ketchup bottle and a few articles of clothing to the thick, gooey crimson of blood.

All in all, the UHD offers a few appreciable improvements, but it's not a significant upgrade from the previous Blu-ray releases. (Video Rating: 66/100)

Likewise, the sparkling vampires try to dazzle and amaze home theaters with another upgrade that will probably only entice the most hardened fans. Similar to the video, the Dolby Atmos soundtrack offers a few noteworthy improvements to the DTS-HD MA track heard on the Blu-ray, but the differences are ultimately small, comparatively speaking, yet generally satisfying enough to please listeners. To be fair, the design was never grandiose or aggressive to begin with, which is to be expected from a teen fantasy romance, but the extra breathing room allows for a more slightly detailed mid-range, providing great clarity and detailing in both the music and the few action sequences. Off-screen activity is convincing, as voices and action smoothly move between across the three channels while generating a taller, half-dome soundstage in some spots, mostly in Carter Burwell's original score.

Meanwhile, vocals remain precise and well-prioritized, but the low-end doesn't provide any more heft or weight than its lossless counterpart. In fact, there are times when the bass feels somewhat lackluster and flat in a couple areas, but adequate nonetheless. Rear activity is noticeably lacking in the surrounds during many interior scenes, and effects in the surrounds are better enjoyed when action suddenly erupts on screen, which, of course, seems fair and most appropriate. But the conversations taking place outside along the beach or in the forest display a variety of subtle and heavily understated atmospherics traveling through the overheads, generating a very mildly amusing hemispheric soundfield. It may not truly impress or create an immersive environ, but they're just enough to give this object-based track the slight edge over its DTS-HD MA predecessor. (Audio Rating: 74/100)

For this 10th Anniversary, Lionsgate offers different a set of bonus material on the Ultra HD disc, one of which is exclusive to this anniversary edition, while porting over the same collection of supplements from the 2013 Twilight Forever release.

Although promoted and sold as a teen fantasy romance with vampires, Catherine Hardwicke's adaptation of Stephenie Meyer's Twilight ultimately feels more like sickly twisted black comedy about an emotionally abusive relationship. With laughably horrendous dialogue and comically bad acting, the movie is more hilarious than romantically serious. The vegetarian vampires take a bite out of 4K Ultra HD with a fine but not particularly impressive Dolby Vision presentation and an enjoyable enough Dolby Atmos soundtrack. With a decent collection of supplements, the overall UHD package is recommended for devoted, hardened of fans. Otherwise, the previous Blu-ray copy will suffice.

Sale Price 15.19
List Price 22.99
Buy Now
3rd Party 50.99
In Stock.
See what people are saying about this story or others
See Comments in Forum
Previous Next
Pre-Orders
Tomorrow's latest releases