Although it often ranks at the bottom of most lists, Steven Spielberg's Hook is nonetheless a terrifically enjoyable and highly spirited fantasy comedy for the whole family, featuring one of the most memorable portrayals of Peter Pan's archnemesis. The cult favorite sets sail on 4K Ultra HD Blu-ray with a lovely HDR10 presentation and an excellent Dolby Atmos soundtrack, giving fans a notable upgrade from the previous Blu-ray and making the nearly 30-year-old film feel young again. Despite a disappointing set of bonus material, the overall UHD package is Recommended.

Hook was my family's movie growing up. Although we were dirt poor, my mother bought the VHS the week it was released because my old man was cooped-up in the hospital after knee surgery and all us kids were freaked out. As kids, we couldn't grasp that the operation was a routine non-life-threatening one. Visiting our dad in the grim hospital was made easier by looking forward to watching Hook when we got home. I know it sounds shallow, but we were kids and that's how our minds functioned back then. Hook was the perfect distraction. As soon as he came home, we watched it over and over again with him.

I cannot think of a modern sequel to a classic piece of literature and theatre that has ever worked and fit in as well with the source material as Hook, the tale of what happened to Peter Pan after Wendy's story. In this Steven Spielberg-told tale, Peter is now a grown man with children of his own. Having been away from Neverland for too long, he has completely forgotten his real identity. He now lives in the U.S. and is far too involved in being a lawyer to be a good father. Upon returning to London to visit "Grandma" Wendy, his children are kidnapped by Captain Hook in an attempt to lure Peter back for another epic battle. Since Peter remembers nothing of his childhood, he doesn't believe the wild nature of what's happened. In fact, Tinkerbell has to drag him back to Neverland and - even then - he doesn't believe it. Hook is a wonderfully magical tale of the power of believing and making the inner child a major part of your adult life.

Hook is one of those rare films that whisk me away to my childhood. Twenty years later, certain moments still bring tears to my eyes. I cannot watch the little boy put his hands on Peter's face and say, "There you are, Peter," without welling up. I cannot watch the Lost Boys celebrate as Peter lands and caws with them after remembering how to fly without that same teary reaction. The collective group of filmmakers who put this film together did it with sweet perfection and a tender heart. 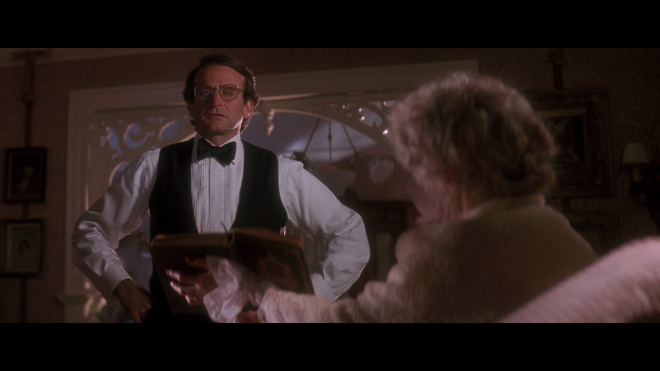 While some complain about the use of sets instead of setting Hook in the grand scope that it "deserves," I, for one, believe sets are one of the best selling points for the film. It would have been hard to successfully give Hook a grand scope in 1991, but the route they took worked in the same fashion as the musicals of old. Would you want to see old classics like White Christmas not filmed on huge sets? No way. Those are iconic images from that movie and other classics like it. Hook' is the same way. The sets are just another element that makes it a classic.

John Williams' score is from the classic school that rarely exists anymore - one with themes for characters, locations, and a grand overture for the film itself. The specific themes have not only stayed with me over the last 20 years, but I watch my four-year-old daughter hum Captain Hook's while playing in her toy room. The Blu-ray case features a pull-quote from Gary Franklin's review saying Hook is "a film that will entertain generations, generations from now." I can attest to that already being the case. When I told my daughter that I would be getting a "better" version of the movie within a few days, she asked if she could watch it with me. And when I told her she could, for days she kept asking if today was the day. When it finally came and we sat down to watch it, having seen it a dozen times before, she still sat there pegged to the screen for all 142 magical minutes of it. When Peter remembered how to fly, she excitedly sat up and yelled, "It's time to fight!" When the Lost Boys showed up at Hook's ship and started fighting, she yelled, "They're awesome! They're awesome! They're awesome!" And just before Captain Hook met his mysterious fate, she exclaimed, "The crocodile! The crocodile! He's gonna eat Captain Hook!"

You see, Hook is already that multi-generational classic. Some families love E.T. or The Princess Bride, my family's movie - my parent's, my siblings' and my own small family's movie - is Hook. Franklin's statement has already proven true. And now that Hook is available in the glorious [Ultra HD] Blu-ray format, it's only going to prove stronger.

Sony Pictures Home Entertainment brings Steven Spielberg's Hook to Ultra HD Blu-ray as a two-disc combo pack with a code for a Digital Copy. When redeeming said code via sonypictures.com and MoviesAnywhere, users have access to a 4K version via FandagoNOW while only unlocking an HDX copy via VUDU. The triple-layered UHD100 disc sits comfortably opposite a Region Free, BD50 disc, and both are housed inside a black, eco-cutout case with a shiny slipcover. At startup, the disc goes straight to an interactive menu screen that changes when switching between the usual options while music plays in the background.

The Jolly Roger sets sail across the seas of 4K Ultra HD Blu-ray with a beautiful, occasionally-stunning HEVC H.265 encode, offering fans a notable improvement over the seven-year-old Blu-ray.

Similar to that HD version, the picture quality is questionable during the opening credits, but afterward, the transfer, likely coming from the same remastered source used for the BD, enjoys a noticeable uptick in definition and overall resolution. Granted, the movie was deliberately shot on the softer side with diffusion filters, giving the adventure in Neverland a romanticized, dreamlike appeal, but it shows plenty of sharp detailing throughout. We can better appreciate the amount of work and effort placed on the production design, exposing the minute, trivial features of the Lost Boys' hiding place and the tiniest object decorating Captain Hook's ship and quarters. However, from time to time, the picture can get a bit blurry and poorly-resolved while the dated special effects are far more noticeable and even distracting, but overall, everything looks to be in great shape.

On the better side, the 4K presentation is significantly brighter and more upbeat thanks to improved contrast levels, making everything appear fresher and more rejuvenated compared to the Blu-ray. From Hook's puffy, frilled shirts to the clouds in the sky and the pirate ship's sails, whites are beaming and radiating with a snappy crispness and pop while maintaining excellent visibility into the far distance. Specular highlights also provide the photography with a welcomed face-lift, supplying the swords and various metallic parts of the ship with a realistic glow and the Captain's polished hook with a twinkling glimmer when catches the light just right. Likewise, blacks are markedly richer with better differentiation between the various shades, giving Hook's hair a silkier shine while keeping the fabric of his shirt and hat a stygian pitch-black. Being a happy, heart-warming family comedy, there aren't many shadows to speak of, but visibility in the few dark moments are outstanding, revealing the smallest detail and object within the murkiest, dingiest corners of the frame.

One of the film's more memorable aspects is Dean Cundey's vibrantly colorful cinematography, which enjoys the most noteworthy boost. While Hook's ornate jacket and the carpet on his steps are a flamboyant dazzling rose, Rufio's hair and outfit glow a vibrant candy red. The green grass of baseball games is spirited and animated, and the blues of the sky and water shine with cheerful buoyancy. However, the most dramatic upgrade is in the secondary hues, displaying a wider, more spirited array which makes its HD SDR counterpart almost paler by comparison. The matte paintings of the afternoon and morning skies show a lovely parade of fiery oranges and yellows mixing with soft pinks and violets before blending into magentas and indigo blues. Meanwhile, facial complexions come with a more natural rosiness and revealing lifelike textures. In the end, HDR10 improvements make the nearly thirty-year-old movie appear refreshed and as though rediscovering its youth. (Video Rating: 84/100)

Refusing to ever grow up, Spielberg's cult favorite takes fans through Neverland with an excellent Dolby Atmos soundtrack, which comparatively, isn't dramatically different from its 5.1 DTS-HD Master Audio counterpart but provides just enough mild adjustments to make it the preferred listening option.

The front-heavy presentation comes with a wide and spacious soundstage, displaying an extensive mid-range with plenty of clarity and distinction between various subtle sounds, while John Williams' score and other acoustic details are full of warmth and fidelity. Channel separation is well-balanced, with convincing off-screen activity that nicely but very subtly extends into front heights. Dialogue reproduction is precise and intelligible if also occasionally flat in some spots. The low-end isn't particularly aggressive, but then again, it's adequate and appropriate for a fantasy family comedy. Honestly, the bass is generally reserved for the music and the few bits of action, providing some depth and weight.

Not surprisingly, given the film's vintage, rear activity is noticeably light and largely restricted to the surrounds, which are not employed very often. However, when put to task, the sides can generate an amusingly satisfying soundfield, filling the room with a variety of discrete effects like the chants and cheers of pirates or some of the unseen local wildlife. Occasionally, the overheads enhance those moments in a very nuanced and refined way, but Williams' score makes better use of the ceiling channels while the few action sequences can feel a tad wanting, failing to really ever create an involving hemispheric environ.

Although the upgrade may not be the sort to test one's system, it's a fantastic listen nonetheless for devoted fans of the movie. (Audio Rating: 78/100)

Fans wanting to upgrade their previous Blu-ray, which only featured a trio of trailers, are now tempted with the original Theatrical Preview and eleven, previously unavailable Deleted Scenes (HD, 8 min).

When considering the entire canon of a filmmaking career spanning over five decades, Steven Spielberg's Hook tends to rank at the bottom of most lists, often disregarded for its minor pacing issues in Neverland and the overly-sentimental plot about fatherhood. However, featuring memorable performances by Robin Williams and Dustin Hoffman in the titular role, Spielberg's film is nonetheless a terrifically enjoyable and highly spirited fantasy comedy for the whole family. The cult favorite sets sail on 4K Ultra HD Blu-ray with a lovely HDR10 presentation that bests its HD SDR counterpart and an excellent Dolby Atmos soundtrack that subtly improves on the previous 5.1 DTS-HD MA mix. The supplemental material is sorely lacking and frankly disappointing, but the overall UHD package is recommended, giving fans a notable upgrade and making the nearly 30-year-old film feel young again.

Sale Price 16.97
List Price 30.99
Buy Now
3rd Party 12.45
In Stock.
See what people are saying about this story or others
See Comments in Forum
Previous Next
Pre-Orders
Tomorrow's latest releases