Spike Lee delivers one of his best joints in years with the real-life inspired BlacKkKlansman starring John David Washington and Adam Driver. The story of an African American undercover officer and a Jewish detective infiltrating the KKK in 1970s Colorado sounds like the stuff of a comedy - but this really happened albeit not necessarily as depicted in this film. While an examination of race relations, the film deftly balances the serious and dangerous overtones of the police officers' work with some pitch-perfect comedy. It's a hell of a ride and one absolutely worth taking. Universal Studios delivers BlacKkKlansman to 4K Ultra HD Blu-ray with a strikingly beautiful native 4K transfer with a subtle but deftly applied use of Dolby Vision HDR complete with Dolby Atmos audio. As one of the best movies I've seen all year - this one is Highly Recommended.

John David Washington (son of Denzel) is Ron Stallworth, Colorado Springs' first African American police officer. Hired to add diversity to the force and improve community outreach, Ron is unceremoniously assigned to records. That changes when a prominent member of the Black Panthers Kwame Ture (Corey Hawkins) speaks at a community event and the CSPD need an inside man to report on the event. Proving himself loyal - his chief (Robert John Burke), tasks him to Intelligence alongside fellow officers Flip Zimmerman (Adam Driver) and Jimmy Creek (Michael Buscemi) where he proceeds to do - nothing. When Ron spots an ad in the newspaper looking for a few good men to join the Ku Klux Klan, he couldn't resist giving them a call and leaving a message. When the Klan calls back, Ron, Flip, and Jimmy get caught up in infiltrating the Klan with Ron on the phone and Flip doing the in-person work. As their investigation develops, the situation becomes more serious as questions swirl about the real identity of Ron Stallworth. 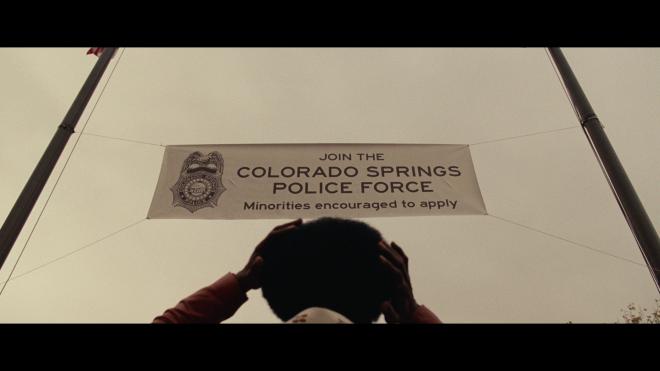 The story of officer Ron Stallworth and the real-life unnamed man the Flip Zimmerman character was based on is one of those tall tales where if your friend told you that an African American man and a Jewish man became members of the KKK, talked to David Duke, and nearly became leaders of their local chapter, you'd tell him he was full of crap. But, real life is full of those funny little ironies and this story more or less actually happened. The film BlacKkKlansman may shift and truncate the timeframe a bit, but then few if any historically-based films are ever 100% accurate in that measure.

Spike Lee has always been one for finding interesting slices of life and making great movies in the process. With BlacKkKlansman he fully explores Ron as the first African American officer of a police force in a city not well known for celebrating diversity. We get to watch as Ron tries his best to be his best at all times - even in the face of grotesque racism from his fellow officers in blue. As his investigations into the Klan intensifies he's also caught in a relationship with a young woman who grew up not trusting the police and knows him only as a man who attended the Ture rally. It's in these moments that Washington shows he's got some of his father's natural talents for conveying a range of emotions. I've only ever seen a handful of episodes of Ballers, so John David Washington is still a relatively new talent to me, but he's already one I'm looking forward to seeing a lot more. All the while, Spike Lee finds the deft balance been serious and terrifying and an almost playful satirical sense of humor. While the humor never feels forced, it's a welcome respite considering the ground this film is covering.

After some of Lee's recent offerings, I'd begun to fear that the filmmaker's best years may be behind him. With BlacKkKlansman he managed to put those fears to rest giving the film an energy, life, and a sense of timelines I haven't felt from one of his movies since 25th Hour. Outside of some of his documentaries, most of his feature films have been unfortunate misfires with Old Boy among the worst offenders. Chi-Raq had an interesting idea behind it and was well-intentioned, but again I personally feel it missed its mark. BlacKkKlansman always felt on point. It never overstepped itself nor did it play things too silly. It offered up a well-executed message and reminder of where things are at from a director famous for having a lot to say while proving to be intensely entertaining.

BlacKkKlansman infiltrates 4K Ultra HD Blu-ray thanks to Universal Studios in a two-disc UHD Blu-ray + Blu-ray + Digital set. Housed in a sturdy two-disc case with identical slipcover artwork, the disc loads directly to a static image main menu with traditional navigation options. All bonus features are included on the disc. The included Digital Copy is Movies Anywhere compatible and does redeem 4K UHD on supporting outlets. 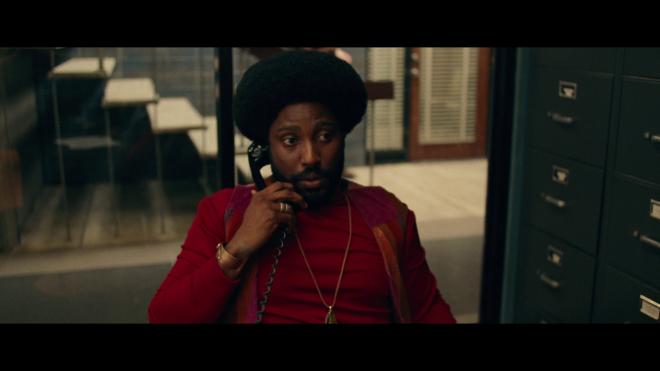 Spike Lee returns to film and the results are damn impressive! Shot on 35mm with some segments in 16mm and finished at a 4K Digital Intermediate, BlacKkKlansman is a beautiful piece of filmmaking. Presented here at 2.40:1 2160p with Dolby Vision HDR and HDR10, the image offers up a notable uptick in all-around quality over its already impressive 1080p SDR counterpart. Fine details excel here allowing for the image to fully appreciate small facial features and skin blemishes, freckles and let the period-focused costuming to leap off the screen. Set design work is also impressive from the stark wood-paneled walls of the CSPD offices to the grimy bars and hangouts Ron and Flip investigate. Grain is also well rendered with a thin but stable presence throughout giving the image a truly film-like appearance.

With Dolby Vision employed, the color, contrast, and black levels aren't pushed beyond any natural tones but instead maintains subtle improvements. The biggest and most notable improvement is in the area of black levels offering some deep inky pushes without becoming crushed. One of the biggest improvements I saw over the SDR Blu-ray was the face montages during the Ture speech. Where the Blu-ray was still good looking, the effect could have a hazy processed shot quality to it and now the image maintains a deep uniform black color. Primaries are healthy with some subtle but still prominent flashes of red and the crisp blues of the police uniforms. Contrasts are also on point pulling back some bright whites from the brink of blooming as they could appear on Blu-ray. As I missed this one in theaters I don't have that basis for comparison, but I'd say this 4K UHD Blu-ray is a damn fine work that fits the film perfectly. 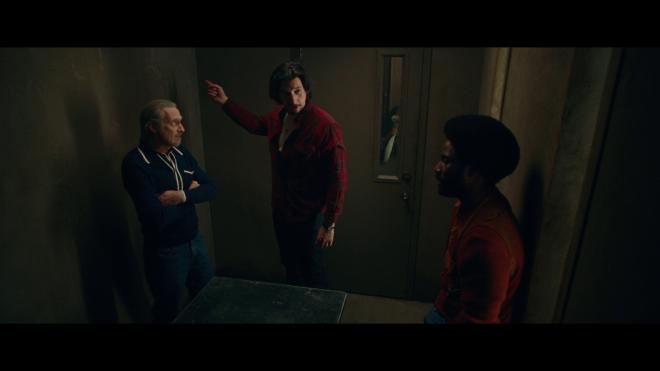 I love a Dolby Atmos mix that doesn't always have to be all show and pizzaz. The Atmos mix afforded BlacKkKlansman is a pristine example of how a film -- one that isn't loaded with explosions, spaceships, or gunfire -- can benefit from an object-based audio mix. There is a rich range of active subtleties throughout the mix that keeps it lively, engaging, with near constant surround activity that doesn't call attention to itself or feel like a gimmick. The mix maintains a lifelike atmosphere throughout with a great sense of space. The movie can shift from the tight and confined CSPD offices and then open up beautifully to the rally hall filled with hundreds of cheering voices complete with a range of sound effects and a moody score and still maintain element fidelity. Key effects like telephone rings are given extra punch and give you a nice little comical/suspenseful jump depending on the scene in question. Dialogue is crystal clear throughout without any issues. Even during the busiest of scenes like the nightclub sequence where there are a bunch of background effects, the dialogue keeps to the front/center channels and never falters. Toss in another effective and occasionally ominous score by Terence Blanchard and it's a solid mix. My only teeny-tiny complaint was that it felt like I had to pop my levels up a notch or two above normal - but that's it. Otherwise, this is an effective, active, and immersive audio mix. 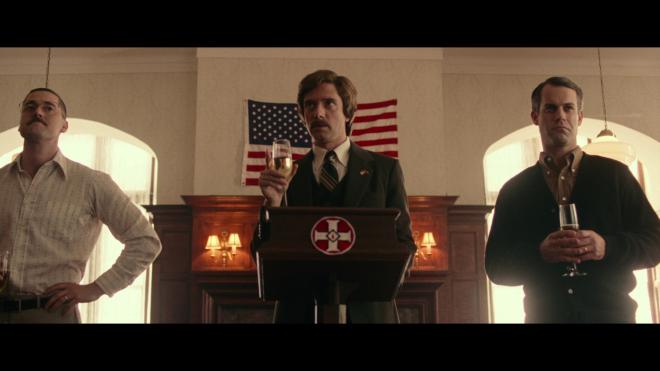 I get it that studios aren't really keen on producing in-depth bonus features these days but Universal could have made an effort. There is so much history and ground to cover between the film itself and the real-life events that some sort of genuine featurette would have been great. As it is, there really is only one actual EPK bonus feature accompanied by an extended trailer played to Mary Don't You Weep by Prince. 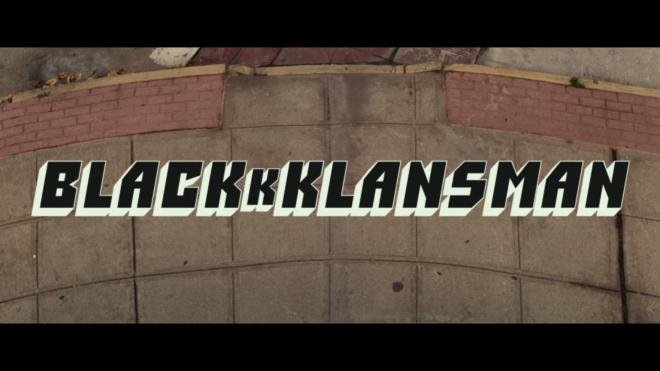 BlacKkKlansman is a timely film in more ways than one. As an examination of our country's race relations history, it's relevant and offers a look at an important case set within small local law enforcement. On the other hand, it marks a grand return to form for Spike Lee whose best films I had feared were behind him. Equal parts funny and entertaining while dramatic and suspenseful, BlacKkKlansman is one of the best movies I've seen this year and I can't wait to give it another watch. Universal Studios gives this film a practically perfect 4K UHD Blu-ray release with an often-stunning native 4K transfer and a terrific Dolby Atmos mix to match. I would have really appreciated something more in the bonus features department as the lack of anything insightful or genuine is the only failing for this release. However, for the film, transfer, and audio, the BlacKkKlansman 4K UHD Blu-ray is Highly Recommended.

Sale Price 17.98
List Price 29.98
Buy Now
3rd Party 5.56
In Stock.
See what people are saying about this story or others
See Comments in Forum
Previous Next
Pre-Orders
Tomorrow's latest releases