Justice League: Throne of Atlantis is a 2015 DCU animated movie that was inspired by the rebooted 52 comic book series, which, at best, was only serviceable to die-hard fans. This new Commemorative Edition 4K UHD Blu-ray features a lackluster 4K HDR10 video presentation, the same DTS-HD MA 5.1 mix, and all of the previous bonus features from the Blu-ray are here along with a new commentary track and featurette. Skip it. 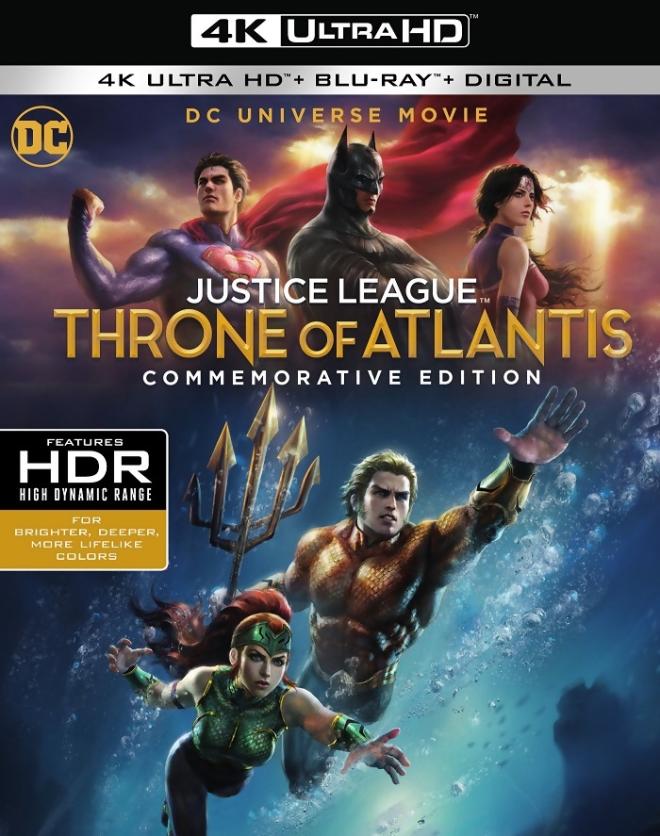 Taking its cues from a 52-comic story arc, Justice League: Throne of Atlantis focuses on Aquaman and his family. With all of these DC Universe animated movies coming out, I hoped they would increasingly get better, but that's not the case with this film, even if it was released in 2015. On paper, there are big battles, justified evil villains, bold superheroes, a semblance of a message, and a ton of action sequences. This all sounds well and good, but the execution in this 72-minute movie just doesn't hit its mark by any stretch of the means. It's rushed, silly, and has poor dialogue choices, and sloppy animation. Even some of the voice acting is sub-par.

The story starts out with a big nuclear submarine being destroyed and everyone on board is killed, which Cyborg relays to the Justice League. It turns out that the usual suspected DC villains were not responsible for his, but rather warriors from Atlantis who want to start a war with human civilization above ground for personal reasons, according to Black Manta and Ocean Master.

Meanwhile, a guy named Arthur Curry is drifting along, avoiding who he really is, a fish-person with gills and special abilities with water and fish. Of course, he's Aquaman and he must confront his family who is trying to wage war on everyone else.

It's the old trope of stepping up to your past, family, and previous mistakes in order to become the ultimate superhero you are meant to be. We've seen it countless times before, especially in this animated DC Universe. The trouble here is that each character development or action sequence looks flat with its animation and lacks any real thrills. There's just nothing to care about here, and that's sad because it's a cool story with family drama and an end of the world scenario. There's just no payoff.

Even a few years later, revisiting this animated flop, nothing has a short nostalgic ring nor does any element pop out as something worthwhile. At least James Wan went for broke and produced a super fun and insane live-action Aquaman movie to reboot his character and make us care about him again. This Throne of Atlantis, though, can sleep with the fishes, with the exception of Nathan Fillion* as Green Lantern.

(*Fillion is awesome because he can't take the sky from me.)

Justice League: Throne of Atlantis comes with a dual-layered UHD66 Disc and a Blu-ray Disc. There is an insert for a Digital copy too. The discs are housed in a hard, black plastic case with a cardboard sleeve. 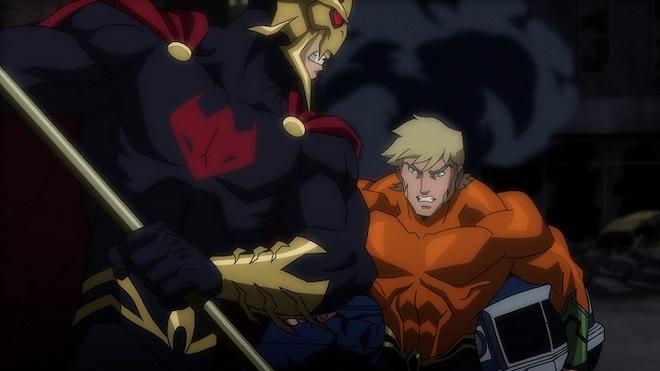 If you've ever seen an animated DCU movie, you know their flat animation style lacks motion or dynamics. It's rather bland, is what I'm trying to say, with barely any detail anywhere. So why would Warner Bros. want to release any of these in 4K? Not sure, because there's really no sense of upgrade with Throne of Atlantis. There isn't a big uptick in detail at all and, while some of the colors underwater might look a little better and bolder with HDR, it's barely noticeable when comparing it to the Blu-ray's Rec. 709 1080p transfer.

The 4K imagery still looks flat and there is even a bigger haze in underwater sequences, making the image a little murky. The animation looks stiff as well, with no fluid motion at all. Again, when underwater or when the entire Justice League is on screen with their colorful costumes, the reds, blues, greens, and yellows all look a tiny bit better, but not enough to warrant an upgrade. Black levels are sufficient, but still bleed over. There is still quite a bit of banding, aliasing and other video issues with this transfer too. 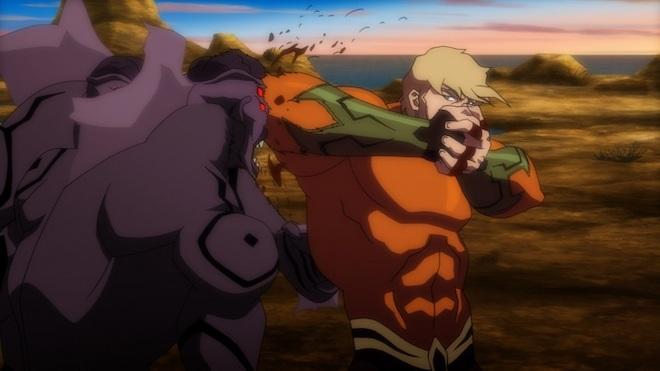 Justice League: Throne of Atlantis comes with the same DTS-HD MA 5.1 mix that the previous Blu-ray (aka, there is no DTS:X or Dolby Atmos option).

Still, it's the highlight of the release, providing some great sonic moments throughout, even though a lot of the film is front heavy. The bigger action moments underwater provide the biggest sounds with a great rumble of bass to simulate being in the ocean depths. Explosions, debris, lightning bolts, and other superhero antics all sound excellent and full forced on each speaker.

The big duo fight scenes have smooth transitions from each speaker from each person as they use their powers and weapons to destroy one another. Ambient noises of ocean sounds, people talking or screaming all sound robust as well in the rear speakers. Other than these bigger moments underwater, the mix is lighter than I'd like to hear. The score does its job by adding to the suspense and comic book feel and is quite epic at times. Dialogue is rather flat and lighter than normal, but you can still hear voices just fine. There were no pops, cracks, hiss, or shrills. 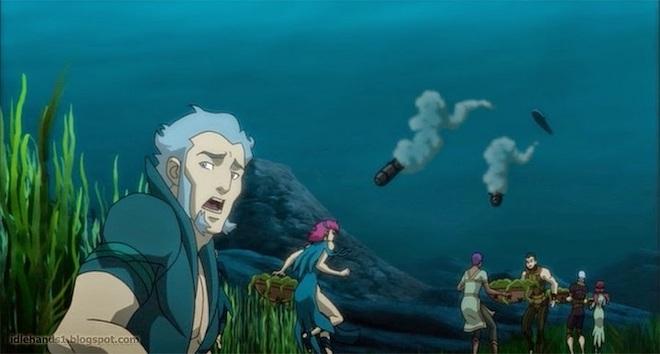 There are two brand new bonus features here including a new commentary track about Aquaman and a new featurette with some comic creatives discussing the character. The rest have been imported from the 2015 Blu-ray. 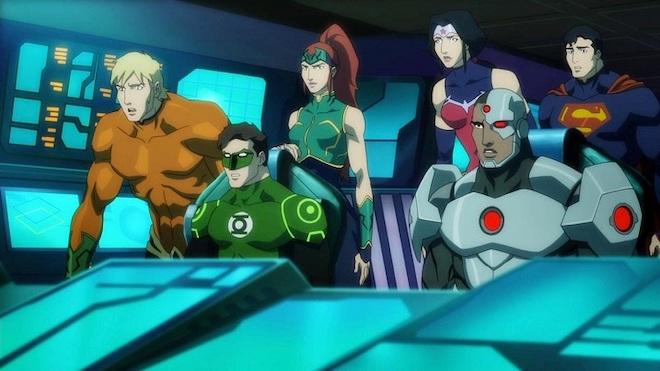 Justice League: Throne of Atlantis is not a great addition to the DCU animated movie series. It's lackluster in storytelling, character development, and with its flat animation. This commemorative 4K edition, which came out to draw on the interest for the live action Aquaman is definitely not an upgrade in quality over the Blu-ray. The audio mix is solid, but also not an upgrade. At least the bonus features are worth your time and provide some great information on the DCU and its characters. Still, unless you're a big fan of this title, we say Skip it.

Sale Price 22.85
Buy Now
3rd Party 8.85
In Stock.
See what people are saying about this story or others
See Comments in Forum
Previous Next
Pre-Orders
Tomorrow's latest releases