Brilliantly mixing the typical stoner archetype with classic detective noir plot, The Big Lebowski is the hilarious, oft-quoted cult comedy favorite from the genius imagination of the Coen brothers. With a slew of memorable performances from a terrific ensemble cast, the film remains a marvelous piece of work twenty years later, cultivating a massively-devoted following, becoming a cultural phenomenon and endlessly celebrated. The cult comedy meanders on Ultra HD with an excellent 4K HDR10 presentation, a great DTS:X soundtrack, and the same set of supplements. Ultimately, the 20th Anniversary Limited Edition collector's package is Highly Recommended for cinephiles everywhere.

Oh what a tangled web you weave when all you want is compensation for someone urinating on the rug that really brought the room together. Jeff Bridges plays the offended victim looking for some kind of reparation after two goons confuse him for someone else. Calling himself "The Dude," an unemployed Los Angeles hippie slacker with a passion for bowling, Bridges is laugh-out-loud hilarious as the poor schmuck who finds himself tangled in a sordid, twisted, and utterly bizarre Raymond Chandler plot full of pornography, Nihilists, cut-off pinky-toes, and white Russians. All this on the same week as the league semifinals against the flamboyantly loud Jesus (John Turturro). Man, that sucks.

In The Big Lebowski, the Coen brothers take the suspense of the mistaken-identity plot, throw in a big dose of film-noir intrigue, and mix it with kilos of stoner comedy goodness. The result is a hysterical ball of confusion where The Dude becomes an unwitting participant in a kidnapping and embezzlement scheme involving a colorful array of characters which he would have never met under normal circumstances. He's the complete opposite of tough-as-nails Phillip Marlowe, which is where the majority of the humor arises — a pacifist at heart who staggers accidentally onto clue after clue pointing him to the real culprit in this surreal mystery.

When confronting the actual Lebowski (David Huddleston) the other two dolts were looking for and hoping for some kind of reparation, The Dude finds a publicly-revered, physically impaired millionaire with a young trophy-wife aptly named Bunny (Tara Reid). A kidnapping conspiracy draws him in deeper into this grim world of the privileged class where the people think themselves ironically superior to The Dude's laidback, devil-may-care demeanor. What he discovers, of course, is a perverse, dysfunctional society with dissenting daughters (Julianne Moore), pornography kingpins (Ben Gazzara), and brown-nosing assistants (Phillip Seymour Hoffman). And he can't seem to find a way out. 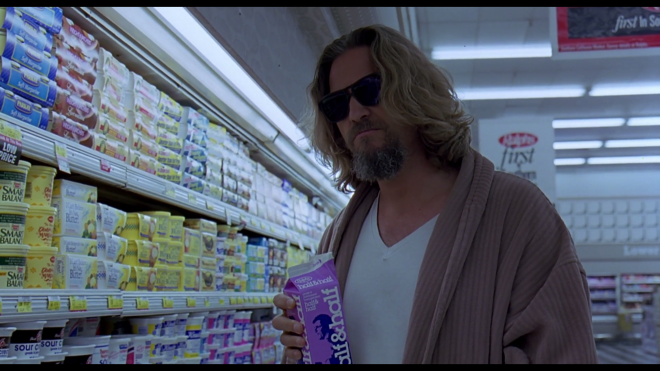 It doesn't help that the filmmakers supply The Dude with assistance by his best friend Walter Sobchak, played to perfection by John Goodman. He's an overly-confident war vet with a scarily violent temper who's ultimately a push-over when it comes to his ex-wife asking him to babysit her dog. What you gotta love about this big oaf is not only the way Goodman portrays him — which is simply marvelous — but the fact that he's a closeted thrill-seeker. Look at how he turns nearly every situation into a reference to Vietnam. He doesn't say it outright, but it's pretty clear he joins The Dude on this crazy joyride because he's bored with his life. Sadly, he only ends up sabotaging everything.

Ultimately, the real pleasure in watching this terrific cult favorite about the bleak, sleazy cosmic comedy that is humanity is the brilliant, highly-quotable dialogue, especially between Bridges, Goodman, and whenever Steve Buscemi's Donny appears. The rapport and back-and-forth among the three men feels genuine, as if they've been friends for years. We're simply coming along for the ride like Sam Elliot's Stranger, eavesdropping on their uproarious conversations. There's never a moment when their harsh language seems scripted or artificial, but in fact spontaneous and spur-of-the-moment. These are real men reacting to the unusual circumstances only the Coens could dream up, making it all the more hilarious.

Roger Deakins is at the helm providing beautiful photography to amp up the film's dark noir aesthetic while maintaining a good-humored atmosphere throughout. The cast of potential suspects is surrounded with a thick air of ambiguity thanks to the many deep shadows that linger about the usually well-lit Los Angeles. The comedy is a delicious blend of the weirdly fantastical living in the underbelly of the City of Angels and an absurdist take on the classic murder mystery of Hollywood's Golden Age. If we're left with a morally ambiguous conclusion, it's intentional because as Bridges puts it, "The Dude abides," meaning he's only a happenstance character on the stage of life, going with the flow — where ever the wind blows — rather than questioning it. 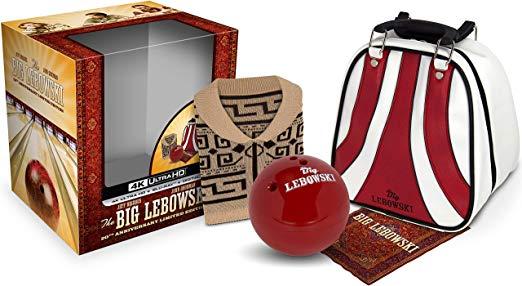 Universal Studios Home Entertainment celebrates the 20th Anniversary of the Coen Brother's The Big Lebowski on 4K Ultra HD with a special limited edition collector's set. The two-disc combo pack comes with a cloth sleeve made to look like The Dude's now-iconic sweater, and it comes inside a bowling bag with plastic handles made of high-quality vinyl fabric that looks like leather with a thick, cushy inner lining. The set also contains a polyester handkerchief that looks like Maude and Lebowski's family rug and a plastic, decorative bowling ball, making for an awesome holiday gift.

The black, eco-vortex case contains a Region Free, dual-layered UHD66 disc and a BD50 disc on opposing panels. Included is a flyer with a Digital Copy code, which can be redeemed via UPHE.com and Movies Anywhere, granting users access to the 4K Dolby Vision version with Dolby Atmos. At startup, the disc goes straight to a menu screen with a static image of the cover art and music playing in the background.

The Dude meanders into the high-class Ultra HD social circles with a great-looking encode thanks a new HEVC H.265 rug that really ties everything together. Although it comes with plenty of appreciable improvements over the Blu-ray, the 2160p transfer appears to have come from the same source used for that 2011 special edition release, which is not a bad thing since that was an attractive picture, to begin with.

Immediately, definition and resolution enjoy a notable uptick, looking slightly sharper throughout, from the various objects decorating Dude's apartment and the fancy architectural style of Lebowski's mansion to the kooky, retro bowling alley. Fine lines and the stitching of Dude's now-iconic sweater seem more distinct with better clarity of its fuzzy fabric material. Individual hairs and mustache whiskers are highly detailed, and facial complexions appear more natural with lifelike textures while the lettering of signs everywhere are more legible. Overall contrast is markedly brighter throughout without impairing or mitigating Roger Deakins' excellent neo-noir aesthetic. The UHD video displays crisp, resplendent whites that never bloom, but are almost tighter and narrower, allowing for a bit more visibility surrounding the brightest spots, such as Dude's infamous dream sequence. Also, specular highlights are equally beaming and glowing along metallic edges and various light fixtures, supplying them with a lustrous sparkle that's true-to-life and photographic, such as Dude's meeting with Jackie Treehorn or any bowling scene.

Likewise, black levels receive a welcomed boost, looking far richer and silkier from beginning to end, which splendidly complements Deakins' cinematography and makes all the absurdist action appear more cinematic. For the most part, the velvety midnight shadows bathing the 1.85:1 image allow for great detailing and visibility in the darkest corners, but once in a while, they come off so strong as to nearly crush the finer aspects. Thankfully, it's not a common enough issue to be distracting, and the brilliant, vivid array of colors throughout, frankly, more than make up for those rather negligible faults. The difference in the primaries from its HD SDR counterpart are admittedly subtle and light, but reds and blues, in particular, have a bit more pop and snap to them. The real win in this HDR10 presentation is the improved secondary hues, however nuanced it may be. Jesus's flamboyant jumpsuit looks fuller, more violet with a deep magenta lining, but the best moment, again, is Dude's dream sequence where the woman's outfits and headdresses now have a more yellowish, antique tint and Maude's Viking getup is a golden honey shade.

All in all, The Dude and his unwitting compatriots hits the Ultra HD lanes with a great HDR upgrade fans will absolutely love and want in their collection. (Video Rating: 84/100)

The Dude abides with a new DTS:X soundtrack that ultimately, doesn't display a significant upgrade over its DTS-HD predecessor but nonetheless provides a great listen fans will enjoy.

The dialogue-heavy, character-driven cult comedy understandably places a great deal of attention on the conversations, ensuring viewers can hear every joke, whispered line and the smallest change in an actor's stress and pitch. The vocals are one small, noteworthy improvement over its lossless counterpart, along with the few instances of bass feeling a tad fuller and more robust without seeming exaggerated or distracting. Although the original design never extends into the higher frequencies in any notable fashion, the mid-range is nonetheless dynamic with excellent clarity and warmth exhibited in the various song selections. The added breathing room makes for a broad and spacious imaging with fluid channel separation and balance. Occasionally, some of the background activity and music extends into the top heights for a subtle but still amusing half-dome soundstage. The surrounds and the rest of the overheads are silent overall, but a few very light ambient effects sporadically sprinkle the action though it's not enough to truly envelop the listener.

Other than the goodies in the gift box set, the same bonus features from the 2011 Blu-ray are ported over for this 20th Anniversary Ultra HD Edition and available on the accompanying Blu-ray.

The Big Lebowski is the hilarious cult comedy favorite with Jeff Bridges and John Goodman in one their most memorable and often-quoted roles. From the genius creative duo, the Coen brothers, the film is a subtle homage to classic detective noir, showing the most unlikely sleuth tangled in a major kidnapping scheme. It's a marvelous piece of work which has grown over time into a cultural phenomenon and endlessly celebrated for its imaginative style and humor. Celebrating its 20th birthday, the film arrives on Ultra HD in a handsome limited edition gift set with an excellent 4K HDR10 presentation and a great DTS:X soundtrack. The same set of supplements are ported over from previous Blu-ray release. But ultimately, the 20th Anniversary Limited Edition collector's package is highly recommended, making it an awesome addition to the collection that really brings the home theater room together.

Sale Price 99.99
Buy Now
3rd Party 99.99
In Stock.
See what people are saying about this story or others
See Comments in Forum
Previous Next
Pre-Orders
Tomorrow's latest releases