Franchise creator James DeMonaco hands over directing duties to Gerard McMurray in The First Purge and gives fans arguably the best installment in the series, injecting a genuinely creepy vibe and a spooky atmosphere to an otherwise bland and familiar plot. The prequel lets loose its darkest inhibitions on Ultra HD with an excellent 4K HDR10 presentation that delivers a nice improvement over the Blu-ray and an outstanding DTS:X soundtrack, but a somewhat disappointing set of supplements. Overall, the package is only Worth a Look for the curious but tempting for franchise fans.

My biggest complaint about the Purge franchise is the lack of subtlety, as each film plainly — and also rather painfully — makes its anti-conservative bias blatantly clear, practically announcing each entry's central theme through a megaphone. In The First Purge, the fourth installment to the series, the movie not only wears its political opposition as a badge of honor, but it essentially celebrates it, fully embracing its message about lower-class minorities being the victims of a social experiment created by Dr. May "The Architect" Updale (Marisa Tomei). Basically, if the first three movies fail at being more artful and creative, this feature pretty much all but gives up even trying to show and just tells moviegoers what the plot is about. Unlike its predecessors, however, this third sequel surprises by also being the most entertaining of the bunch, going full-tilt bonkers with a series of wildly evocative imagery inspired by the current sociopolitical climate.

From a script by franchise-creator James DeMonaco, the plot takes fans back to 2014 when a new extreme right-wing party, the New Founding Fathers of America (NFFA), have taken control of the U.S. government. Due to a failing economy and political turmoil, the NFFA decides to implement Dr. Updale's experiment in Staten Island with a specific, violent-ridden apartment complex as its main focal point. Led by one of our main protagonists Nya (Lex Scott Davis), protestors loudly broadcast the experiment's darker implications while repeatedly telling audiences about the poor living conditions of this urban neighborhood, mostly told through the eyes of Nya's at-risk younger brother Isaiah (Joivan Wade). Meanwhile, to demonstrate the area is not all that bad — as well as a weak attempt to inject some deeper, philosophical bombast — we're also introduced to Dmitri (Y'lan Noel), the local drug lord with a heart of gold who will predictably rise as a champion of the 'hood. 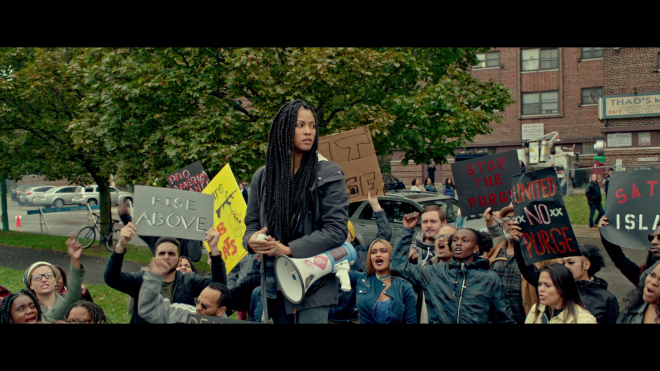 The story's predictability is another of the production's various problems. Maybe because the first three movies already made the nefarious intentions of this experiment blatantly obvious, this prequel can't seem to offer any surprises or come up with anything new altogether. It's pretty much the same we've seen where a small group of neighbors — strangers in the previous two — band together in order to fight and survive the twelve-hour window of legalized crime. The only difference placing this movie slightly above the rest is director Gerard McMurray, in his second full-length feature, breathing some visually inventive and hauntingly creepy life to an otherwise generic and familiar plot. Opening with interviews of residents expressing a desire to release their inhibitions without consequence and being incentivized to participate in the violence sets a disturbing tone. Not only are these people motivated by feelings of retribution for perceived injustices, but money becomes justification.

Setting The First Purge apart from the rest is this genuinely eerie atmosphere, a horror element the other three films I felt were sorely lacking. Of course, a pair of grandmothers strolling down the street with shopping carts full of dolls and listening Dazz Band's "Let It Whip" is a terrifying sight on its own. And the mentally disturbed drug addict Skeletor (Rotimi Paul) with syringes taped to his knuckles and treating this night as his own private playground is unnerving. But it's McMurray creative eye who proves to be the production's greatest asset. Working with cinematographer Anastas Michos (Death to Smoochy, Man on the Moon), McMurray bathes the image in vividly electrifying blues, flamboyant candy rose reds and animated emerald and lime greens. The ironically colorful presentation not only complements the story with a spookily macabre ambiance, but it also gives the film a classic horror vibe, feeling like a throwback to the Italian Giallo. It may be far from a memorable genre entry, but McMurray's The First Purge is the best of the franchise.

Universal Studios Home Entertainment brings The First Purge to 4K Ultra HD Blu-ray as a two-disc combo pack with a flyer for a Digital Copy, which can be redeemed via Universal Redeem or Movies Anywhere, unlocking the 4K HDR10 version with Dolby Digital Plus 5.1 on all available streaming services. The dual-layered UHD66 disc sits comfortably opposite a Region Free, BD50 disc inside a black, eco-elite case with a glossy, lightly-embossed slipcover. At startup, the disc goes straight to the familiar menu screen with options along the left side, full-motion clips, and music playing in the background.

Blessed be our New Founding Fathers for granting Ultra HD Blu-ray with an excellent, occasionally stunning HEVC H.265 encode. Shot entirely on the Arri Alexa Mini camera system, capable of up to 3.2K resolution, the freshly-minted transfer lets loose its rage and savagery with a welcomed uptick in definition, looking every so slightly sharper and exposing the smallest defect and flaw in the urban streets. We can clearly make out tiny scratches, bullet holes and smudges of mold covering the walls of apartments while the pits and pockmarks on the stone buildings and sidewalks are plainly visible even from a short distance. Unfortunately, resolution levels dip slightly at night during the actual purge experiment, which is a majority of the movie. It's not too terrible but noticeable nonetheless compared to earlier daylight scenes and to the Blu-ray. The upscaled picture also comes with a fair share of mild aliasing along the sharpest edges while blinds and the brick walls of buildings almost have a moiré effect.

The 4K presentation also arrives with a heavily-stylized orange-teal cinematography and a slightly subdued contrast. Compared to its HD SDR counterpart, the light grayish, overcast tone complementing the subject matter is more apparent, which might be more faithful to the filmmakers' creative intentions. This noticeably impacts whites, however, which fall on the lower end of the grayscale, making them look cloudier and a tad duller while still clean and crisp. Specular highlights don't seem to benefit much from the upgrade either. In fact, the brightest spots appear somewhat limited, as in the light fixtures and explosions, where the whitest, hottest areas bloom and engulf the finer details. Brightness levels, on the other hand, profit from the lawlessness of the format and seem mostly unaffected by the movie's deliberate look and feel, looking darker and more accurate than the Blu-ray. Many scenes are layered with richer, more velvety blacks, showing outstanding gradational differences between various shades, providing most of the 2.40:1 image with a cinematic appeal and dimensionality. Unfortunately, this comes at the cost of visibility in the darkest, murkiest corners, looking a bit like crush, especially in clothing.

On the flip side, the HDR10 video delivers a strikingly spirited and surprisingly flamboyant palette, nicely heightening the filmmakers' creative vision and the Italian Giallo feel of Anastas Michos's photography, making the UHD the preferred way of watching the movie. Most notably, primaries are far more energetic and dramatically exaggerated, lavishing the screen with an animated, eye-catching pop. Reds, in particular, are sumptuous with a darker, more crimson flair in the blood, and the blues come with an electrifying intensity. Various scenes are bathed in either a candy rose glow, a haunting cobalt splendor, or an evocative shamrock green flair. Secondary hues also are full-bodied and passionately sensational, making the warm, orangey yellow glare of street lights feel more threatening than safe while explosions light the screen with lively dark, fiery oranges. Most impressive has to be the vividly radiate eye contacts, which either shine a creepy emerald green, a coldly distant arctic blue or a blazing scarlet red. (Video Rating: 80/100)

Violence erupts on the streets of both the 4K Ultra HD Blu-ray and Blu-ray thanks to an outstanding DTS:X soundtrack that generates a more nuanced and subtle presentation rather than an aggressive, overwhelming soundscape. Although it may not seem like it while watching the movie, the ceiling channels are continuously employed with various understated atmospherics and the echoing sounds of the urban neighborhood. The commotion of the city, the occasional chirping of birds, the rustling of leaves in the distance or the ringing of gunshots effortlessly pan across the overheads to shrewdly generate an involving but unpretentious hemispheric aural experience. The surrounds are equally active with outstanding directionality and flawless movement from the fronts to the sides and rears, maintaining an immersive soundfield.

Not too surprising, much of the action is spread across the three front channels, displaying excellent separation and balance into the off-screen space, providing an engagingly broad and spacious soundstage. Along with Kevin Lax's score, some of the background activity lightly bleeds into the top heights to create a surprisingly captivating half-dome effect, especially during the action-packed second half. A sharply-extensive mid-range exhibits superb clarity and detail in the loudest segments, allowing the pop of every gunshot, debris from explosions and clang of metal being struck to reverberate throughout the room and be perfectly heard. Amid the chaos, vocals remain distinct and well-prioritized, and a hearty, pleasingly responsive low-end packs a welcomed oomph and weight to each punch, crash, gunshot, and explosion. (Audio Rating: 88/100)

Bonus material can be enjoyed on both the Ultra HD disc and the Blu-ray.

Franchise creator James DeMonaco steps down from directing duties but pens the script for The First Purge, the fourth installment in the series, following a very familiar plot about a small group of people surviving a twelve-hour window of legalized crime. However, stepping into the director's chair is Gerard McMurray, who injects an otherwise bland and predictable plot with a genuinely creepy vibe and a spooky atmosphere that feels like a throwback to classic horror and the Italian Giallo. The prequel lets loose its darkest inhibitions on Ultra HD Blu-ray with an excellent 4K HDR10 presentation that nicely improves over its HD SDR counterpart with more vivid, animated colors and an outstanding DTS:X soundtrack that splendidly adds to the atmosphere. Sadly, with a puny selection of supplements, the overall UHD package is only worth a look for franchise fans.

Sale Price 19.49
List Price 29.98
Buy Now
3rd Party 2.78
In Stock.
See what people are saying about this story or others
See Comments in Forum
Previous Next
Pre-Orders
Tomorrow's latest releases