The Purge: Election Year further expands on the sociopolitical concerns explored previously while also being moderately entertaining, but those heavy-handed ideas cost this third entry some crucial votes. The second sequel is purified on Ultra HD with an excellent 4K HDR10 presentation, a great DTS:X soundtrack and the same assortment of supplements, making the overall package Worth a Look only for devoted fans.

For this moviegoer, the more fascinating aspect of Election Year, the third installment in The Purge franchise, are the disturbingly eerie ideas expressed throughout directly touching on present-day, topical events. Given the current political climate and the wave of mass gun violence, there is something terrifying in imagining such a future becoming a reality, especially with the growing rise of nationalism taken as a serious policy-making discourse. As with its predecessor, the second-sequel attempts to explore some somber sociopolitical concerns by following a small group of people simply trying to survive the night, and once again, they are led by surly, hardened Leo Barnes (Frank Grillo), now working as head of the secret service team protecting Senator Charlie Roan (Elizabeth Mitchell) who's campaigning for the Presidency. After her fortified house is attacked by the opposing party, The New Founding Fathers of America (NFFA), the two are aided by a trio of supportive voters (Mykelti Williamson, Joseph Julian Soria, and Betty Gabriel).

In this nightmarish fantasy allowing citizens the freedom to give into their most violent impulses, audiences tour the capital of a not-totally-unrecognizable America, as the group runs from a posse of fascists wanting to kidnap the senator for her campaign promise of ending "The Purge." Meanwhile, a gang of privileged, entitled teens feels this night is their right, and a bunch of Russian tourists participate wearing sadistically distorted and twisted costumes of iconic American figures. But of more interest to me is a plot set just over two decades since the beginning of this so-called national "holiday," meaning twenty years of an insanity using language to normalize the disgusting behavior. Those familiar with cargo cults and the philosophical studies surrounding these practices, this is more than enough time for an annual ceremony to evolve with a religious-like fervor, especially when dubbed a name suggestive of a cleansing ritual and as a purifying sacrament. However, as with its predecessor, the lack of subtlety makes James DeMonaco's film also feel pretty ham-fisted and heavy-handed, diminishing much of its entertainment value. 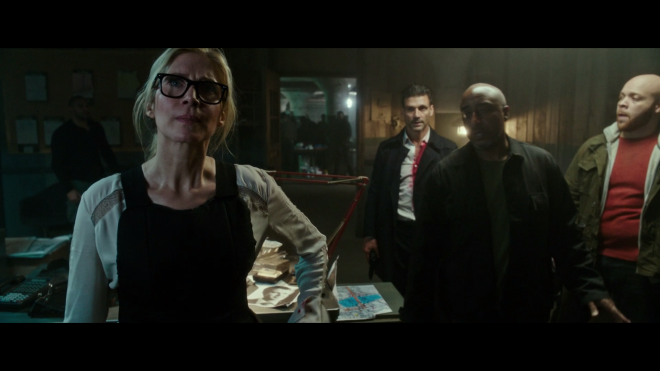 Universal Studios Home Entertainment brings The Purge: Election Year to 4K Ultra HD Blu-ray as a two-disc combo pack with a flyer for a Digital Copy. When redeeming said code via UPHE.com, Movies Anywhere and VUDU, users can access the 4K HDR10 with Dolby Digital Plus 5.1. The dual-layered UHD66 disc sits comfortably opposite a Region Free, BD50 disc inside a black, eco-vortex case with a glossy slipcover. At startup, the disc goes straight to a menu screen with a static image of the cover art and music playing in the background.

The votes are tallied, and in this troublesome election year, the third installment in the dystopian thriller franchise wins by a landslide thanks to a great-looking HEVC H.265 encode that not only defeats the previous sequels but also bests its HD predecessor. As with the first two movies, much of the movie takes place at night with characters running through the streets, so brightness levels are absolutely essential. Thankfully, blacks are inky rich with an opulent silkiness that bathes the 2.40:1 image with stygian, midnight shadows. Occasionally, some of the finer details tend to be lost within the darkest, murkiest areas, but it's not too damaging. Meanwhile, the best aspect of the 4K presentation is the significantly brighter contrast balance, delivering crisper, more resplendent whites throughout. Specular highlights also appear more dramatic and intense, providing various surfaces with a realistic glimmer while the brightest, hottest areas are tighter and narrower, allowing for better detailing in and around the lamps and other lights.

Shot entirely on the Arri Alexa camera system capable of 3.4K resolution, the 2160p transfer, likely upscaled from a 2K digital intermediate, enjoys an appreciable uptick in overall definition, though there are a couple poorly-resolved moments and very mild aliasing sprinkled throughout. Nevertheless, fine lines and objects are well-defined and distinct in the background while foreground information is a tad sharper, and facial complexions are a bit more revealing, especially during close-ups. As with the other two entries, Jacques Jouffret's stylized photography feels largely limited and restrained, keeping to a strict teal-orange palette that's greatly enhanced in HDR10. The street lamps of Washington, D.C. alternate between an electrifying blue glow and a warm marigold yellow, and the balls of fire show better clarity and distinction within the intensely passionate orange brilliance of each fiery flame. Although the other colors remain about the same as its HD SDR counterpart, the overall 4K video is a great step up over the Blu-ray. (Video Rating: 82/100)

As they did with the previous two movies on UHD, Universal Studios has decided to raise the stakes of the second sequel in The Purge series to DTS:X, but just as with those releases, the upgrade doesn't really offer a significant improvement.

It's still an excellent listen with various atmospherics filling the room and discretely panning between the channels. Occasionally, the overheads appear to enjoy some mild activity, but such moments are very far and few in between and largely fail to generate an immersive aural experience. Instead, the design employs the surrounds more frequently, enveloping the listening area with the screams of victims, the echo of gunfire in the distance and the commotion of violence saturating the capital.

Thanks to the extra breathing room, the mid-range comes with bit more distinction and definition between the mids and highs while fluid, convincing movement across the three channels creates a wide and spacious soundstage that's highly engaging. Dialogue reproduction is precise and intelligible even amid the loudest, most chaotic moments. And like the last movie, a powerful, occasionally aggressive low-end provides a deep, weighty rumble to explosions and a sharp, impactful punch to gunshots. (Audio Rating: 80/100)

In The Purge: Election Year, writer and director James DeMonaco fully commits to exploring the sociopolitical ideas established in the previous movie when Frank Grillo's Leo Barnes is charged with protecting Elizabeth Mitchell's hopeful Presidential candidate. In spite of providing several mildly engaging thrills of action and some intriguing concepts on this holiday's evolution, the film ultimately fails due to DeMonaco's lack of subtlety and blatant heavy-handed message. The movie purifies itself on Ultra HD with an excellent 4K HDR10 presentation that bests its HD SDR counterpart and a great DTS:X soundtrack. Porting over the same set of supplements as the Blu-ray, the package is worth a look for devout fans.