James DeMonaco's The Purge is a frustratingly dumb horror feature feigning insightful social commentary, but a series of head-scratching clichés undermine the plot's central theme. The home-invasion thriller breaks into Ultra HD with a middling 4K HDR10 presentation and excellent DTS:X soundtrack, but a disappointing set of supplements, making the overall package underwhelming. Skip It.

To put it rather bluntly and upfront, James DeMonaco's The Purge is a frustratingly dumb horror feature that somehow became a box-office hit and garnered a small but devoted cult following. My problem with it starts with the way certain events unfold much-too conveniently and in a very contrived manner. It's simply done to make it easier on the filmmakers to achieve a heavy-handed, undeserved and completely nonsensical conclusion. Ethan Hawke stars as the cocky patriarch who sells expensive, high-end security systems specially designed for a near-future dystopian America where once a year, all crime is legal for 12 hours. His wealth and success is built on providing such security and his knowledge seems both intimate and personal. Yet his goofily awkward and aggravatingly annoying son (Max Burkholder) just happens to know the secret code for allowing a nameless stranger (Edwin Hodge) into their home, setting the plot into motion. The script is nothing more than a bullet-point series of cliché plot devices strictly adhering to the three-act structure.

The only good thing which can honestly be said of this ridiculously dull and braindead production is that the premise is a somewhat refreshing take on the home-invasion thriller. A group of a violent, bloodthirsty teenagers were hunting Hodge's stranger, and Hawke's family stands in the way of their rich, privileged, entitled fun. This leads to another reluctant compliment for the movie; DeMonaco and his crew make the attempt at injecting the story with some semblance of intelligence and social commentary, as this is a future where wealthy, ultraconservative, right-wing politicians twisted the Constitution for making "The Purge" legal. However, DeMonaco doesn't really commit to further exploring the implications of his own plot, instead undermining any thoughtful insights with Hawke's white savior complex. Meanwhile, mom (Lena Headey) and daughter (Adelaide Kane) literally serve no purpose other than to be hapless, helpless, screaming damsel in distresses requiring tough, protective, "beat-their-chest" men to save them.

*Insert the rolling-eyes emoji or a gif of Tina Fey doing the same.* 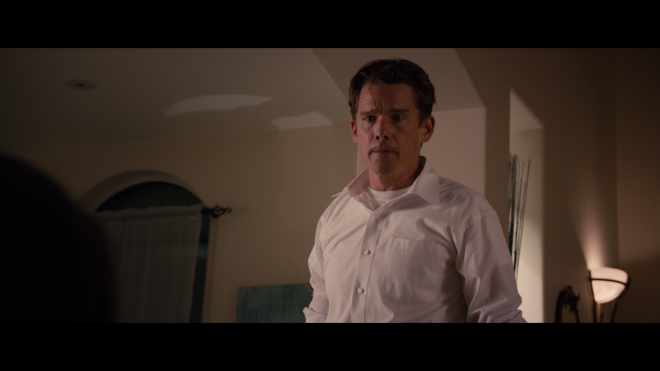 Universal Studios Home Entertainment brings The Purge to 4K Ultra HD Blu-ray as a two-disc combo pack with an UltraViolet Digital Copy code. When redeeming said code via UPHE.com and Movies Anywhere, it includes the SD and HD SDR while VUDU users can access the 4K HDR10 with Dolby Digital Plus 5.1. The dual-layered UHD66 disc sits comfortably opposite a Region Free, BD50 disc inside a black, eco-vortex case with a glossy slipcover. At startup, the disc goes straight to a menu screen with a static image of the cover art and music playing in the background.

The cleansing begins on 4K Ultra HD with a rather middling and average-looking HEVC H.265 encode that shows very little to almost no difference over its Blu-ray predecessor. Shot entirely on the Arri Alexa digital camera system that maxes at 3K resolution but later mastered to a 2K digital intermediate, the overall 4K upscale enjoys a small uptick in overall definition with slightly sharper clarity of the background information and a tad better textural detailing in the faces and clothing. However, such a negligible upgrade is made moot by minor instances of aliasing along the sharpest edges, but most egregious and distracting is the boundless amount of posterization and mild banding. The worst moments are those taking place in the dark and involving flashlights, which unfortunately is a major chunk of the entire movie. The banding can be seen when the light either glares into the camera or streams across the wall while the posterization is foulest along the faces of the cast.

Presented in its original 2.39:1 aspect ratio, the HDR10 presentation displays ordinary, middle-of-the-road contrast where whites, of which there is an abundance throughout, look rather plain and near identical to its HD SDR counterpart. Granted, specular highlights offer a welcomed improvement with a tighter, narrower glare from the lights and giving various metallic objects a brighter shine, but the hottest spots tend to bloom and obscure the finer details. Blacks remain about the same, which isn't an entirely bad thing, but shadow details are often lost and engulfed by the darkest, murkiest areas of the image. Although primaries receive a mild but nice boost, appearing a bit fuller and deeper, most of the color palette and secondary hues reveal little variation, and facial complexions appear somewhat pales and lifeless. Of course, much of this could be excused as the result of Jacques Jouffret's stylized photography. But even so, the 4K video is less than satisfying and fairly average compared to other UHD releases. (Video Rating: 58/100)

Blessed be the new Founding Fathers for granting the horror thriller with an excellent DTS:X soundtrack that makes this Purge night somewhat more bearable.

A majority of the design is a front-heavy soundscape with much of the action spread across the three front channels, generating a wide and spacious soundstage. Some of those off-screen effects spread into the front heights with appreciable effectiveness though not to any degree that delivers a compelling half-dome environ. The surrounds and overheads are also employed on several occasions, mostly notably when the gang of teenagers finally break into the house and a few of their voices circle the listening area. This nicely expands the soundfield while gunshots echo all around, generating a couple hemispheric moments fans will find satisfying. However, such instances are very far and few in between, leaving the room in a great deal of silence and focused on the soundstage. Although there is slightly better, more discernable clarity and detailing within the mid-range, it's not very significant or a massive improvement over its DTS-HD MA counterpart. Dialogue is distinct and very well-prioritized in the center. Meanwhile, the low-end isn't particularly noteworthy, but it's adequate with a welcomed punch and response during the action. (Audio Rating: 78/100)

Personally, James DeMonaco's The Purge is a frustratingly dumb horror feature even though I admit the premise is an intriguing take on the home-invasion formula. Starring Ethan Hawke and Lena Headey, the plot also feigns to be a social commentary on current sociopolitical issues, but any thoughtful insights are quickly undermined by a series of terribly dumb clichés, making the project a waste of time. The 4K Ultra HD Blu-ray arrives with an average-looking HDR10 video but a much better DTS:X soundtrack. The supplements are the same as before, making the overall package skippable.

Sale Price 19.99
List Price 29.98
Buy Now
3rd Party 15.48
In Stock.
See what people are saying about this story or others
See Comments in Forum
Previous Next
Pre-Orders
Tomorrow's latest releases