The Sum of All Fears - 4K Ultra HD Blu-ray

Based on the 1991 novel of the same name by Tom Clancy, The Sum of all Fears is not quite as effective or up to the expectations of the franchise, but director Phil Alden Robinson delivers an entertaining enough entry to the Ryanverse. Starring Ben Affleck and Morgan Freeman, the spy thriller imagines a younger, inexperienced Ryan confronted with a far more grimly alarming scenario than its predecessors, but ultimately, it doesn't suit the character's better-known personality. As part of the ten-disc Jack Ryan film series collection from Paramount, the espionage thriller fights dangerous covert missions on 4K Ultra HD with an excellent Dolby Vision presentation and a fantastic Dolby TrueHD soundtrack. Porting over the same set of supplements as the Blu-ray, the overall package is Recommended for Jack Ryan fans and UHD enthusiasts.

Given the current political climate and the various acts of terrorism gripping modern society, The Sum of all Fears oddly feels more pertinent today than it did sixteen years ago during its original theatrical run. The plot about reigniting tensions among the United States and Russia while also thwarting nuclear war between the two superpowers no longer feels like some droll fantasy, which is not to imply the possibility suddenly exists today. Only, tensions have steadily grown over the years, along with right-wing Neo-Nazi extremism, which somehow makes this Jack Ryan installment a bit more suspenseful and terrifying than I remember when first seeing it in cinemas. At the time, I also didn't care for this Ryan (a competent Ben Affleck replacing a better, more appealing Harrison Ford) failing what felt like the central point — saving Baltimore from an atomic bomb hiding beneath a football stadium. Revisiting the espionage thriller years later, I still have issues with this, but I also better understand the ultimate goal having a larger significance and importance to the plot's prevailing theme.

In the hands of Affleck and director Phil Alden Robinson (Field of Dreams, Sneakers), Ryan often seems at odds with himself — apprehensive and hesitant one moment while assured and certain the next. Granted, the film is a pseudo-prequel reboot of the franchise, drastically retrofitting Tom Clancy's original 1991 novel as an origin story of sorts. This is still the same intelligent everyman Ryan who uses brains and intellect over brawns and force, but he's significantly younger, slowly rising up the CIA ranks, dating his future wife (Bridget Moynahan) and meeting John Clark (Liev Schreiber). However, what worked in Red October — Ryan is surrounded by people who know less than him — is not quite as effective at generating the same level of suspense. Robinson's attempts at balancing the urgency of intelligence gathering with more standard action-oriented spy fare largely feel forced for appeasing a particular audience, which frankly doesn't suit the Ryan character. Nevertheless, the spy thriller is admittedly entertaining with a great but underused Morgan Freeman. 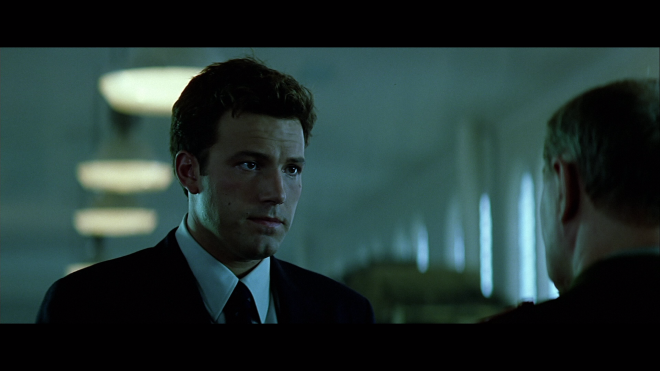 Paramount Home Entertainment brings The Sum of all Fears to 4K Ultra HD Blu-ray as part of the ten-disc combo box set dubbed Jack Ryan: 5-Film Collection. As of this writing, there are no plans for a standalone package. The pack also includes a flyer with a Digital Copy code, which can be redeemed via ParamountMovies.com, allowing owners to watch a 1080p HD copy with Dolby Digital Audio. However, VUDU users can unlock 4K streaming rights with Dolby Vision and Dolby Digital Plus 5.1 audio. Five dual-layered UHD66 discs are accompanied by another five Region-Free BD50 discs spread across three center spindles and on the opposing panels of a thicker-than-normal black, eco-vortex case with glossy slipcover. At startup, viewers are taken directly to a static screen with the usual selection along the bottom and music playing in the background.

The fourth (very loose) installment in the Ryanverse takes a sharp left turn down reboot road and thwarts nuclear war equipped with an excellent HEVC H.265 encode. Offering the best and most notable upgrade thus far, the picture shows sharp definition for a majority of the runtime though there is a fair amount of soft, blurry moments that thankfully don't distract. Shot on traditional 35mm film, the fine lines of various objects are distinct, individual hairs are clear-cut, and even the dated CG visuals remain well-defined. The fabric of the various suits and articles of clothing are easy to make out, along with the stitching and threading of the shirts. The faces of the cast are highly revealing with great lifelike textures that expose the pores and wrinkles during close-ups. Background info is plainly visible throughout, even in the many poorly-lit interiors and dark nighttime sequences.

In fact, the 4K transfer is often showered in oily, midnight shadows that don't ruin the outlines of background info or objects in the darkest corners of the frame, but there seems to be a tiny bit of very mild crush in the suits, which tends to engulf the finer details of the clothing. Nevertheless, black levels are rich and velvety with good gradational differences between the shades in other parts of the picture, providing the 2.35:1 image with a lovely cinematic appeal and some appreciable dimensionality. The 2160p video is also significantly brighter thanks to a more lustrous and improved contrast with dazzling, brilliant whites that give the clouds in the sky an energetic pop and the various light sources a luminous shine. Specular highlights come with a great tight and narrow glow within the brightest spots, maintaining excellent detailing while light bounces off metal objects and faces with a polished, glistening realism.

The Dolby Vision presentation continues to impress with John Lindley's stylized teal-orange cinematography noticeably benefitting from the jump to Ultra HD, displaying a more vibrant and wider array of colors throughout. Many of the deeper, more passionate reds in clothing and objects are distinctly different from the candy rose glow inside Air Force One, and electrifying blues energize the screen and are continuously sparkling while the sky has a picturesque splendor. One of the more impressive moments is right after the nuclear explosion where scenes are either bathed in an earthy, brownish yellow tone or in an admiral cobalt blue tint. Meanwhile, the rest of the video is awash in true-to-life yellows throughout while a few military sequences come with vivid purples and magentas, and facial complexions come with a lifelike rosiness, making the overall presentation a great step-up over its HD SDR counterpart. (Video Rating: 84/100)

The countdown to worldwide annihilation tick-tocks with the same Dolby TrueHD 5.1 soundtrack enjoyed on the Blu-ray, and it remains an outstanding listen that'll give audio systems a nice workout.

Granted, an object-based audio option would have been a welcomed upgrade, but as is, the high-rez track comes with excellent, precise dialogue reproduction, allowing for every emotive line to come through with superb clarity. Though the nuclear blast comes with some deliberately mild distortion and graininess, a distinct and dynamic mid-range exhibits clean detailing in the upper frequencies with plenty of warmth and fidelity. A majority of the action is spread across the three front channels with lots of continuous background activity that creates a welcoming and spacious soundstage, but a good amount of ambient effects discretely pan into the surrounds, generating a satisfyingly immersive soundfield. Those same atmospherics effortlessly travel into the overheads when applying the receivers' Dolby Surround or DTS: Neural:X up-mixing functionality, which is an added bonus. Low bass is pretty commanding and occasionally authoritative with a powerful, room-shaking impact during the explosion. (Audio Rating: 88/100)

Based on the 1991 novel of the same name by Tom Clancy, The Sum of all Fears is not quite as effective or up to the expectations of the franchise, but director Phil Alden Robinson delivers an entertaining enough entry to the Ryanverse. Starring Ben Affleck and Morgan Freeman, the spy thriller imagines a younger, inexperienced Ryan confronted with a far more grimly alarming scenario than its predecessors, but ultimately, it doesn't suit the character's better-known personality. As part of the ten-disc Jack Ryan film series collection from Paramount, the espionage thriller fights dangerous covert missions on 4K Ultra HD with an excellent Dolby Vision presentation and a fantastic Dolby TrueHD soundtrack. Porting over the same set of supplements as the Blu-ray, the overall package is recommended for Jack Ryan fans and UHD enthusiasts.

Sale Price 51.49
List Price 69.99
Buy Now
3rd Party 38.08
In Stock.
See what people are saying about this story or others
See Comments in Forum
Previous Next
Pre-Orders
Tomorrow's latest releases