Based on the 1987 novel of the same name by Tom Clancy, Patriot Games is both the second entry in the Jack Ryan universe and a standalone feature that establishes the character as the central hero of his own franchise. With Harrison Ford in the role of the highly-intelligent everyman CIA analyst, the film may not quite reach the levels of its predecessor, but it's nonetheless a smart popcorn feature with memorable performances. As part of the ten-disc Jack Ryan film series collection from Paramount, the espionage thriller plays a deadly game against terrorist extremists on 4K Ultra HD with an average-looking Dolby Vision presentation and a great Dolby TrueHD soundtrack. Porting over the same set of supplements as the Blu-ray, the overall package is Recommended for Jack Ryan fans and UHD enthusiasts.

Patriot Games has the unique advantage of being both a sequel and not really a sequel to John McTiernan's The Hunt for Red October. The espionage thriller floats somewhere in the space between a reboot and a sequel-in-spirit only while still maintaining the illusion of being the next adventure in the Jack Ryan universe. Although Red October was published first, the Tom Clancy book on which this script is based on is technically the start of the franchise, officially establishing Ryan as the central protagonist of his own series. And in a weird way, we can say the same about Phillip Noyce's film, which feels very much like the beginning of Jack Ryan's spy adventures while McTiernan's classic works splendidly as a standalone feature. Much of this sentiment is largely due to Harrison Ford's excellent and memorable performance as Ryan, taking over for Alec Baldwin. In Ford's capable hands, he's an unpretentious but highly-intelligent everyman entangled in dangerous situations, a plausible ordinary guy reluctantly thrust into heroism — a role he'd much rather not occupy.

Adding to the idea of the production feeling as though it were a follow-up, the plot ideally — and rather indirectly — takes place a few years after the events of Red October with James Earl Jones being the only actor reprising his role as Admiral James Greer. In any case, Noyce's espionage thriller works as one of the better spy movies in cinema. Not that there's anything wrong with more inventive, action-driven fantasies like the James Bond or Jason Bourne franchises, but the Jack Ryan series is more grounded in reality, focused on the hours, days, weeks spent on research, deductive guesses and investigative analysis of limited information. Ford's Ryan hunts down a splinter cell of IRA extremists (Patrick Bergin, Sean Bean and Polly Walker) wanting to harm him, his wife (Anne Archer) and daughter (Thora Birch) after unwittingly thwarting an assassination attempt and killing one terrorist member. Granted, it's nowhere near the same game of chess level as its loosely-connected predecessor, but the film is nonetheless a smart popcorn feature with another memorable Harrison Ford performance. 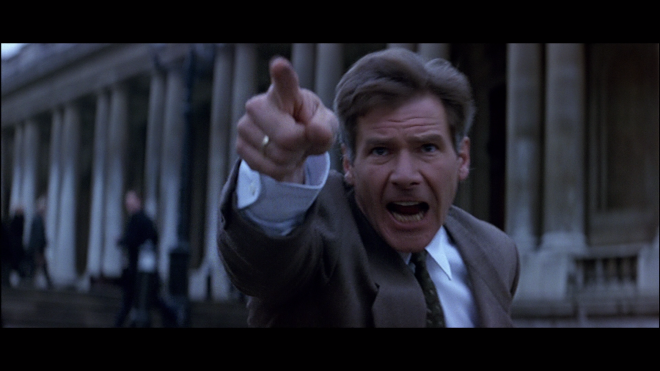 Paramount Home Entertainment brings Patriot Games to 4K Ultra HD Blu-ray as part of the ten-disc combo box set dubbed Jack Ryan: 5-Film Collection. As of this writing, there are no plans for a standalone package. The pack also includes a flyer with a Digital Copy code, which can be redeemed via ParamountMovies.com, allowing owners to watch a 1080p HD copy with Dolby Digital Audio. However, VUDU users can unlock 4K streaming rights with Dolby Vision and Dolby Digital Plus 5.1 audio. Five dual-layered UHD66 discs are accompanied by another five Region-Free BD50 discs spread across three center spindles and on the opposing panels of a thicker-than-normal black, eco-vortex case with glossy slipcover. At startup, viewers are taken directly to a static screen with the usual selection along the bottom and music playing in the background.

Ryan fights to save his family on Ultra HD with a rather average-looking HEVC H.265 encode. But compared to its Blu-ray counterpart, this is the best the movie has ever looked on home video, offering a nice uptick in definition. It's not a night and day difference, unfortunately, but the 4K transfer shows well-defined lines for a good chunk of the running time. Facial complexions can, at times, be fairly revealing, and background information is plainly visible, exposing some of the smaller objects decorating the Ryan household. In the end, the picture comes with its fair share of soft, blurry moments throughout.

It doesn't help that contrast falls on the lower end of the grayscale, making the overall video appear toned down, grayish and somewhat flat. Whites are nonetheless clean and noticeably brighter in several areas while highlights benefit most by looking crisper and more narrow, allowing for finer details within the brightest areas and a more dazzling shimmer along metallic edges. Black levels are also nicely improved with better gradational differences, richer shadows and strong delineation. Combined with a thin layer of grain, the 2.35:1 image has an attractive cinematic quality.

The overall palette is also affected by the stylized cinematography, feeling largely subdued and restrained. Nevertheless, the Dolby Vision HDR process provides better saturation in the primaries, especially the reds of blood and several articles of clothing. A good deal of the photography comes with vivid steely blues as well, particularly the scenes in London and Maryland. Meanwhile, the scenes taking place in Africa are bathed in lively yellow earth tones, giving the skin tones of the cast a sunburnt appearance that feels accurate to the climate while others show a lifelike rosiness around the cheeks.

The 4K Dolby Vision presentation may not show a significant improvement, but it looks nice overall and offers a small upgrade over its HD SDR counterpart. (Video Rating: 62/100)

Ryan plays a deadly game with the same Dolby TrueHD 5.1 soundtrack heard on the Blu-ray, which is neither a good or bad thing since the original design was never that busy or immersive to begin with. Much of the activity and action is spread across the front soundstage, feeling wide and welcoming with strong fidelity and a good sense of presence. The mid-range isn't very extensive, but it maintains plenty of clarity and distinction during the loudest segments while dialogue reproduction remains crisp and intelligible throughout. The low-end is also not particularly impressive, but it's adequate enough to provide good weight and heft to the music, gunshots and explosions. The lossless mix does well when applying the receivers' Dolby Surround or DTS: Neural:X up-mixing functionality, nicely expanding the soundfield with various subtly convincing ambient effects and effortlessly bleeding James Horner's score into the surrounds and heights. (Audio Rating: 72/100)

Based on the 1987 novel of the same name by Tom Clancy, Patriot Games is both the second entry in the Jack Ryan universe and a standalone feature that establishes the character as the central hero of his own franchise. With Harrison Ford in the role of the highly-intelligent everyman CIA analyst, the film may not quite reach the levels of its predecessor, but it's nonetheless a smart popcorn feature with memorable performances. The espionage film plays a deadly game on 4K Ultra HD with a rather average-looking Dolby Vision presentation and the same good Dolby TrueHD soundtrack that lends itself nicely to the receiver's up-mixing functionality. Porting over the same set of supplements as the Blu-ray, the overall package is recommended for Jack Ryan fans and UHD enthusiasts.

Sale Price 51.49
List Price 69.99
Buy Now
3rd Party 38.07
In Stock.
See what people are saying about this story or others
See Comments in Forum
Previous Next
Pre-Orders
Tomorrow's latest releases