Nearly twenty-five years later, my sentiments for Robert Zemeckis' Forrest Gump still remain true. It's an adequate and satisfying enough romantic drama. However, amusing and exceptionally well-made as it is, the film is hardly deserving of the accolades and endless praise it continues to bask in. In a year when it won the Oscar for Best Picture against the likes of Pulp Fiction, The Shawshank Redemption, Quiz Show and Four Weddings and a Funeral, the touching story of a simple man from Alabama gawkily stubbing his toe on major American events of the 20th Century is, quite frankly, not worthy of such notoriety and acclaim. Ultimately, aside from its ingenious use of early CG visuals, the plot is downright generic, an attempt at being a sweeping all-encompassing tale of history but lacking an engaging, emotional core outside of what drives the central titular protagonist. On the other hand, what saves the film from complete mediocrity is Zemeckis' superb direction and Tom Hanks performance as the lovable, dim-witted, unwitting hero.

In fact, it's really these two aspects deserving of more recognition and deeper analysis, which I maintain as distinctly different and separate from the film's mainstream appreciation. Indeed, I continue being amazed by the irony of it all, as moviegoers love it without realizing Forrest actually represents them, the average American. He values and holds onto a simple, black-and-white worldview while also living an aimless, frivolous and largely apathetic existence. Poor Forrest is terribly gullible, incognizant and oblivious to the history unfolding all around him, always failing to recognize the significance of things occurring everywhere except only when it concerns him personally, such as the Civil Rights and Feminist movements. Further still, he often feels like a caricature of conservative values slowly creeping into American society since the 1950s, largely influenced by his mother (Sally Field), who's deeply-rooted in Southern Confederate culture. Jenny (Robin Wright), then, is suggestive of liberal values doomed to die. Again, I admit Forrest Gump offers a fascinating and thoughtful ride of American history, but it's also generic and sometimes a chore to finish. 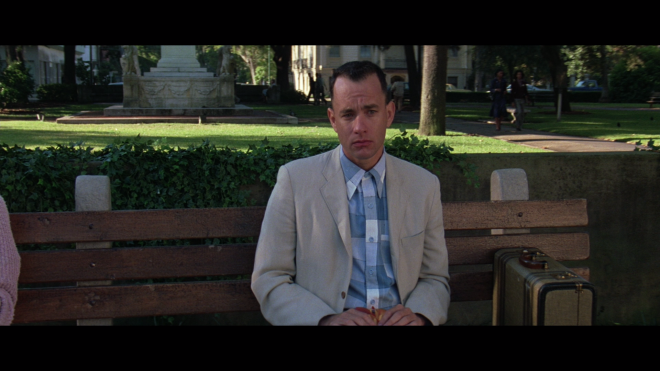 Paramount Home Entertainment brings Forrest Gump to Ultra HD Blu-ray as a three-disc combo pack with a flyer for a Digital Copy, which can be redeemed via paramountmovies.com and VUDU but, as we write this review, only available in HD / SDR and Dolby Digital Plus 5.1 (if recent Paramount releases are any indication, this may change on 6/12/18). The dual-layered UHD66 disc and Region Free, BD50 copy sit comfortably on opposite sides of a center spindle while another Region Free, BD50 disc containing the bonus features is on the last panel. All three are housed inside a black, eco-elite case with a glossy slipcover. At startup, viewers are taken directly to a static screen with the usual selection along the bottom and music playing in the background.

Forrest runs obliviously through history on the roads of Ultra HD with a strong but slightly underwhelming HEVC H.265 encode. Overall, the 4K transfer, which was likely taken from the most recent remaster used for the 20th Anniversary edition, is a bit of a mixed bag, as several moments display welcomed uptick in clarity and definition. Close-ups are quite revealing, the threading in clothing is fairly sharp and background information is pretty distinct for a majority of the runtime. However, there is also an ample splattering of poorly-resolved sequences, most apparent in wide to extreme long shots, while many nighttime and dimly-lit scenes are noticeably blurrier than others. The two most egregious moments are Forrest and Jenny's reunion in Washington, D.C. and Forrest spending New Year's with Lt. Dan in the bar, the latter of which also appears pretty noisy rather than awash in natural grain. Added to that, we have some visible evidence of mild digital manipulation, which on the Blu-ray was barely detectable but is now quite evident on UHD.

Presented in its original 2.39:1 aspect ratio, the 2160p video doesn't really offer the dramatic contrast and brightness improvement we'd expect of the new format. Granted, whites, on the whole, are bolder with a more striking, radiant glow while specular highlights provide a minor dazzle and realistic shine to metallic objects, but much of the picture lacks better clarity in the hottest areas, such as within the clouds and various sources of light. The same goes for black levels where shadows are definitely richer and silkier, but at the cost of finer detailing within the darkest, murkiest corners of the frame, often creating a rather flat, two-dimensional image. Similarly, the color palette feels predominantly equivalent to its HD SDR counterpart while at the same time, slightly and artificially boosted. Admittedly, the Dolby Vision HDR delivers slightly fuller, deeper primaries overall, but there's little to almost no variation in the secondary hues while at the same time, facial complexions occasionally appear overcooked or suddenly pale and flushed.

In the end, the 4K Dolby Vision presentation offers a nice improvement over its Blu-ray predecessor, but it's not a huge, significant change while also feeling slightly underwhelming in some areas.

On the other hand, the now-classic romance drama has been awarded an honorable and respectable Dolby Atmos soundtrack, sure to please the most loyal fans. The film has never delivered a particularly aggressive or noteworthy track, focused more on the dialogue and intimate conversation, which by the way, are crystal-clear and precise in the center, prioritized above all else. Even the most action-packed, war-riddled sequences set in Vietnam are considerably tame compared to other similar movies, with only the occasional sudden flurry of bullets zipping into the side speakers, the echo of machine gun fire ringing throughout the room or the debris from explosions scattering in every direction. Except for one notable moment with the military helicopters, the ceiling channels are generally silent and rarely see any action, even when characters march during a deluge of rain.

In fact, a vast majority of the design is a front-heavy presentation, and it decidedly benefits from the added breathing room of the object-based audio format. Several ambient effects flawlessly and convincingly pan across the image and into the off-screen space while also subtly traveling into the front heights, creating a broad and expansive soundstage that's highly engaging. Alan Silvestri's score also shares some of this space by lightly occupying the top fronts, appreciably extending the soundfield and generating a welcoming half-dome feel for a majority of the runtime. The mid-range also feels extensive and quite dynamic, exhibiting excellent detailing and separation during the loudest segments. Low-frequencies effects are not particularly impressive or noteworthy, but they provide the action and music with a robust, weighty presence that's adequate to specific moments in the story.

Decades later, my sentiments for Robert Zemeckis' Forrest Gump still remain true since first seeing it in theaters. Admittedly, it's a well-made production with a thoughtful plot and a terrifically memorable performance by Tom Hanks, but the story is frustratingly melodramatic and forcefully sentimental with a payoff that lacks both the punch and emotional impact the filmmakers seem to have been aiming for. On 4K Ultra HD Blu-ray, the now-classic romance drama patiently waits for the bus, packed with a strong but somewhat underwhelming Dolby Vision HDR presentation and an excellent Dolby Atmos soundtrack. Featuring the same set of supplements as its Blu-ray counterpart, the overall package is ultimately recommended for devoted fans of the film while UHD enthusiasts will want to wait for the price to drop.

Sale Price 17.93
Buy Now
3rd Party 99.99
In Stock.
See what people are saying about this story or others
See Comments in Forum
Previous Next
Pre-Orders
Tomorrow's latest releases