Like so many other movies throughout our lives, Steven Spielberg's Saving Private Ryan landed in theaters during a momentous year in my life and is largely remembered due to the memories attached to seeing it. That's not to say the film itself isn't fantastic in its own right. It's an exceptional piece of master filmmaking from a celebrated legend. Most war movies up to this point played fairly straightforward with an emphasis on depicting graphic battles and the ways in which war affects soldiers while WWII pictures prominently displayed those soldiers as determined, faultless heroes fighting an unequivocally evil empire. As good as those movies were and are, there was always a sense of distance and detachment from the real hell servicemen and servicewomen experience. Working very closely with long-time collaborator Janusz Kaminski, Spielberg aimed not only for brutal, shockingly-explicit realism, but he also gave audiences a deeply emotional story that demonstrated the feeling of brotherhood felt between soldiers better than any other film before it, fleshing those heroes into flawed, troubled three-dimensional people.

The now-infamous opening action sequence on Omaha Beach remains a grippingly suspenseful, white-knuckle experience, a visual and aural bombardment that hurls the viewer into the harrowing throes of combat. Every time I watch the first twenty minutes, I'm instantly transported back to the theater in early August 1998. That summer, I had completed my service and was working as a FedEx driver, but I was constantly worried about a very close friend who was deployed, at the time, to the Bosnian war. Needless to say, I wasn't exactly in the best of moods to see a war movie, but a coworker didn't want to see it alone. I went somewhat reluctantly but was amazed how quickly I lost myself in the poignant story of a small company's possibly futile search for one soldier to go home. The camaraderie and banter between the men, brief momentary respites from the war, were on point and felt real, making their startling deaths all the more tragic, with Giovanni Ribisi's being the most tearfully heartbreaking, for me. Decades later, the film still holds a special place in my heart and memory, but it also remains an extraordinarily exceptional motion picture. 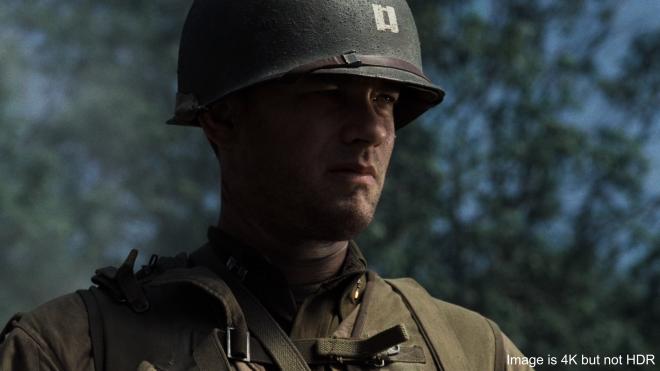 Paramount Home Entertainment brings Saving Private Ryan to 4K Ultra HD Blu-ray as a three-disc "Commemorative 20th Anniversary" combo pack with an UltraViolet Digital Copy, which can be redeemed via ParamountMovies.com or VUDU, giving users access to a 1080p HD copy with Dolby Digital Audio. Inside the black, eco-vortex case with glossy slipcover, the triple-layered UHD100 and Region-Free BD50 discs sit on opposite sides of a center spindle while another BD25 disc containing all the special features is on the last panel. At startup, viewers are taken directly to a static screen with the usual selection along the bottom and music playing in the background.

The war epic lands on the shores of 4K Ultra HD with a gorgeous HEVC H.265 encode that shockingly offers a noticeable improvement over the Blu-ray. Janusz Kaminski's heavily-stylized photography has never looked as beautiful as it does in Dolby Vision HDR, unveiling a great deal of color not apparent before. The overall palette still remains excessively restrained and limited, looking just as gray and grim as ever. But beneath the dreariness of war, viewers will be amazed to discover bright reddish-brown rust eating away at the hedgehogs of Omaha Beach, the mix of moss and olive greens in the soldiers' uniforms, the ironically picturesque blue of the sky and the lively, pinkish hue in the faces of the entire cast. Sadly, the 4K presentation isn't always consistent, as there are several moments that suddenly look washed out and drained at the oddest times, looking very similar to its HD SDR counterpart. Nevertheless, the cinematography benefits strikingly from the wider color gamut, which is greatly appreciated.

Originally shot on traditional 35mm film cameras, the 1.78:1 image also enjoys better contrast and brightness throughout, from the crisp, pristine whites of the fluffy clouds slowly moving across the sky to the midnight blacks in various articles of clothing, some of the equipment and the dark penetrating shadows. Specular highlights are equally impressive with the brightest spots looking tight and controlled, providing the surface of some metallic objects with a realistic glimmer while the blazing glow of the sunshine bouncing off faces maintain revealing, lifelike textures. The 2160p video comes with an appreciable uptick in definition and resolution, but frankly, it's a significant jump. There are times when viewers may note better clarity in the threading and stitching of the uniforms, more wrinkles and negligible blemishes in the faces or the distinct pits and bullets holes on the walls of various buildings. But overall, detailing remains about the same as before while the improvements made by the HDR and WCG makes this a splendid 4K presentation.

The Spielberg classic storms home theaters with a fantastic and often thrilling Dolby Atmos soundtrack that features several small improvements but doesn't quite vanquish its DTS-HD predecessor. Similar to what was previously heard on the Blu-ray, the surrounds are continuously busy with the chaos and mayhem of war, filling the room with screams, bullets whizzing by, explosions in the distance and many ambient effects during quieter, more intimate conversations. To be perfectly honest, this is the track's greatest strength, maintaining a superbly immersive 360° soundfield for almost the entirety of the runtime — hence, the high score — but the ceiling speakers don't really see nearly as much action. On a few occasions, listeners can enjoy the roar of airplanes suddenly flying overhead, debris raining down all around or the ironic chirping of birds hanging out amongst the trees. The Neuville battle sequence amid the pouring rain is another great moment, but not convincing enough to create a hemisphere-like soundscape.

On the other hand, the design benefits in other areas from its jump to the object-based format. Specifically, the extra breathing room provides a bit more clarity and extension within the mid-range, exhibiting more discrete detailing during the loudest, ear-piercing action sequences. Across the entire soundstage, bullets are sharp and piercing, convincingly panning between channels and into the off-screen space, and the tiny pebbles from clumps of dirt and debris can be clearly heard landing on and rolling across the ground. Other atmospherics, like the individual drops of rain, are sometimes heard in the front heights, but John Williams' score makes far better use of that area. The low-end is about the same as before, however, which is not a bad thing. Bass remains robust and periodically potent, providing an energizing weight and presence to the explosive action. And amid all this hellish pandemonium, vocals are precise and distinct in the center.

The only other issue worth mentioning is a weird echoing effect that seems to happen from time to time at the oddest moments, such as the conversation between characters after the small skirmish at a derelict radar station. I can only assume this might be an unfortunate result of the spatial-sound enhancements made to the original design, but whatever the case be, it can be somewhat distracting.

Twenty years ago, Steven Spielberg's Saving Private Ryan made an indelible impact in my life, landing in theaters at a time when I needed the right combination of emotional outlet and escapism. Along with being one of my most cherished movie-going experiences, the classic war epic is a harrowing tale of brotherhood, depicting the heroes of combat as the flawed, troubled soldiers who marched forward in spite of their fears. Celebrating its 20th Anniversary, Paramount brings the film to 4K Ultra HD as a commemorative package featuring a gorgeous Dolby Vision HDR presentation and an awesomely satisfying Dolby Atmos soundtrack. With the same set of supplements as before, the overall package is highly recommended for everyone.