A heavily-stylized sci-fi thriller with a B-movie schlock premise at its center, Alex Proyas' Knowing manages to overcome its absurd shortcomings and be a decent piece of entertainment. Spreading the message of an impending apocalypse in 4K, the movie lands on Ultra HD with a great-looking Dolby Vision HDR presentation, a satisfying Dolby Atmos soundtrack, and the same set of supplements as before, making the overall package Worth a Look for hardened fans and the UHD faithful alike.

In Knowing, an astrophysics professor (Nicolas Cage) is essentially challenged over his deterministic worldview with what he slowly discovers to be evidence for fatalism. Of course, the only proof in his possession is a piece of paper from fifty years earlier with seemingly random numbers scrawled on it. And the closest we ever see this MIT educator come to anything remotely resembling the scientific method for solving a coherent pattern is the use of different color markers circling those numbers on a whiteboard. Oh, and there's also the occasional use of a computer or GPS device for plotting specific sections of the strange sequence. In spite of all that, this sci-fi thriller never feels intended as much a challenge for the audience as towards Cage's character. All the while, the particulars dividing the two philosophical concepts are heavily blurred to the point where it's never clear when the protagonist's convictions are even brought into question.

Nevertheless, there is something oddly entertaining about this Alex Proyas (The Crow, Dark City) production, which moviegoers found appealing enough to make it a decent hit. The script written by Juliet Snowden and Stiles White, based on a concept story by YA author Ryne Douglas Pearson (Mercury Rising), manages to generate a puzzling mystique surrounding the long sequence of numbers, even if the central idea is ultimately silly. And Proyas does well in maintaining a dark atmospheric air of mystery through to the end although for some viewers, what feels intended as a vague, open-ended conclusion up for interpretation is anything but, answering its own mystery with heavy-handed religious implications. However, everything leading up to that is layered with good performances from Cage and Rose Byrne, playing the daughter of the woman who originally wrote the numbers. And still, those looking for something more challenging will have to look elsewhere because Knowing ultimately proves it doesn't know much. 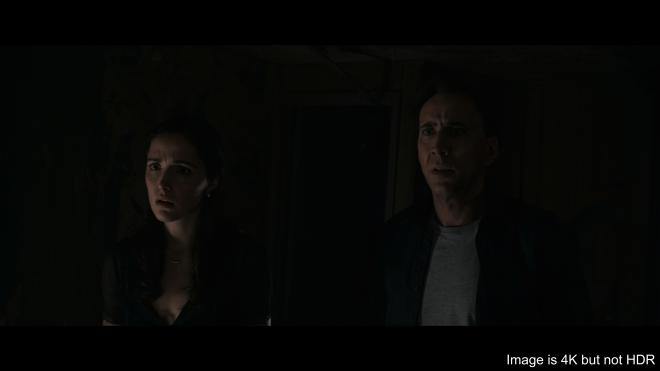 Lionsgate Home Entertainment brings Knowing to 4K Ultra HD Blu-ray as a two-disc combo pack with a flyer for a Digital HD Copy, which can be redeemed via redeemmovie.com or through VUDU but is only available in HD SDR and HDX. The dual-layered UHD66 disc sits comfortably opposite a Region A locked, BD50 disc inside a black, eco-vortex case with a glossy slipcover. At startup, the disc goes straight to a static menu screen with full-motion clips and music playing in the background.

The signs leading to the Ultra HD apocalypse are paved with a great-looking HEVC H.265 encode, giving fans an awesome step up over its Blu-ray counterpart. Immediately apparent is the color timing looking significantly different. As before, the stylized photography was deliberately limited and restrained to give the movie a brownish-yellow cast, but in Dolby Vision HDR, the picture now has more of a golden-amber appeal that better suits the plot's theme and creating a sense the world is growing hotter as the story progresses. Nighttime sequences, on the other hand, come with a silvery blue appearance, and although secondary hues are heavily subdued, there are several moments where viewers can really appreciate the difference, such as the fiery orange glare of the sun in the last quarter of the movie, the explosion of the airplane crash or the final dreamlike scene. Also, primaries appear richer, particularly the blue of the sky and the red in clothing, blood and some of the lights. And some of the very mild banding seen on the Blu-ray is now gone.

The more dramatic improvement in this 4K presentation can be seen in the superior contrast, delivering vividly brilliant and intense whites while still remaining sharp and narrow. This allows for better visibility of minute details in the brightest areas, such as headlights, the blazing hot, glaring sun or the luminous glow from the strange, egg-shaped crafts at the end of the movie. Along those same lines, the 2160p video enjoys a nice uptick in definition with some moments looking sharper than others, but overall, it's not a major jump from its HD SDR counterpart. Granted, there a couple scenes where viewers can perhaps better make out some pores and wrinkles in the faces, which by the way look pretty sunburnt. Better are the luxuriously inky blacks throughout, which are greatly appreciated during the many nighttime sequences. Pitch-perfect, midnight shadows never engulf or ruin the finer details in the background, and in fact, when John and Diana explore the trailer in the woods, viewers can see every object and detail in the background.

The end of the world has been upgraded to a mostly satisfying Dolby Atmos soundtrack offering several nice improvements over its predecessor, but Earth's destruction doesn't quite reach the level of demo-worthy. For the most part, the track remains fairly similar to its DTS-HD counterpart, with much of the action occupying the surrounds with outstanding directionality and placement where effects flawlessly pan between the sides and rears. Occasionally, some of that activity travels to the height channels with relatively convincing effectiveness, but such moments also seem reserved for the larger action sequences, such as the airplane crash and the subway disaster where various bits of debris discretely travel above and rain down in every direction. The screeching sound of the airplane's engine is especially impressive as they smoothly move across the front heights, creating a highly-engaging half-dome wall of sound.

With the added breathing room, the design seems to enjoy a slightly cleaner mid-range, exhibiting superb detailing and separation in the loudest, ear-piercing moments with excellent room-penetrating clarity. The score, too, displays lots of warmth and fidelity while also lightly bleeding into the top height channels, generating a very spacious and broad soundstage. Even amid the most tumultuous, chaotic segments, dialogue remains precise and distinct. The low-end feels about the same as before, which can be quite thunderous with a room-energizing presence, but it doesn't really reach the lower depths, leaving some of the more harrowing visuals a tad wanting. Nevertheless, fans will enjoy this hemispheric mix.

As far as big-budgeted B-movie productions go, audiences can do far worse than Alex Proyas' Knowing, a mystery sci-fi thriller centered around a schlocky premise that fails to pit two philosophical concepts against each other. Nevertheless, with good performances from Nicolas Cage and Rose Byrne at the forefront, Proyas manages to immerse the plot with an engaging air of mystery and atmosphere, delivering a decent piece of schlock entertainment. The end of the world is deciphered on 4K Ultra HD with a great-looking Dolby Vision HDR presentation and a satisfying Dolby Atmos soundtrack, sure to make fans happy with the results. With the same set of bonus features as its Blu-ray counterpart, the overall package is ultimately worth a look for hardened followers and those hungry for more good 4K UHD material.