The Barden Bellas return in Pitch Perfect 2 to once again redeem themselves from another embarrassing performance while grappling with graduation and facing the world without the singing troupe. The ladies take center stage with a great-looking HDR10 presentation and an amusing DTS:X soundtrack doing the backup. With the same set of bonus features as before, the overall package is Worth a Look for the most loyal fans.

Picking up three years after the first movie, audiences return to Barden University in Pitch Perfect 2 and catch up with the Bellas, who are now seniors with three-consecutive Collegiate A Cappella championship wins. However, in very similar fashion to its predecessor, director Elizabeth Banks, marking her directorial debut, opens the sequel with another disastrously embarrassing performance where a wardrobe malfunction causes a national scandal because this time around, it involves President Obama. Once again, the singing troupe is forced on a treacherous journey to salvage whatever little dignity remains by winning the world championship from a German group called Das Sound Machine, led by the hilarious pair Birgitte Hjort Sørensen and Flula Borg. If any of this sounds remotely familiar, it's because it most definitely is. Basically, the filmmakers cheated by essentially copying from their previous assignment, but they tweaked several details and added a few new characters so as to avoid from being accused of plagiarism.

Nevertheless, the overall story still feels fresh enough to deserve a passing grade. Whereas the first movie receives a solid B, this follow-up earns a confident C+. And this is in spite of much of the humor feeling like a repeat of the first, with Brittany Snow now taking over leadership of the troupe and straining to be someone outside the a cappella lifestyle. Meanwhile, Rebel Wilson continues to be the butt of overweight gags along with also being Adam DeVine's love interest, and Hana Mae Lee, again, utters the most oddball comments with an extremely quiet voice, except her remarks are now very dark and unsettling. Adding to the Bellas' zaniness is Chrissie Fit's disturbing personal stories from her home country and Hailee Steinfeld as the somewhat apprehensive legacy Emily Junk, who does better singing original material than someone else's. Other than the hilariously heated rivalry with Das Sound Machine, fans catch up with Anna Camp discovering her true vocation while commentators John Michael Higgins and Banks return to divulge even more inappropriate remarks, making this sequel a hysterical follow-up to the first movie. 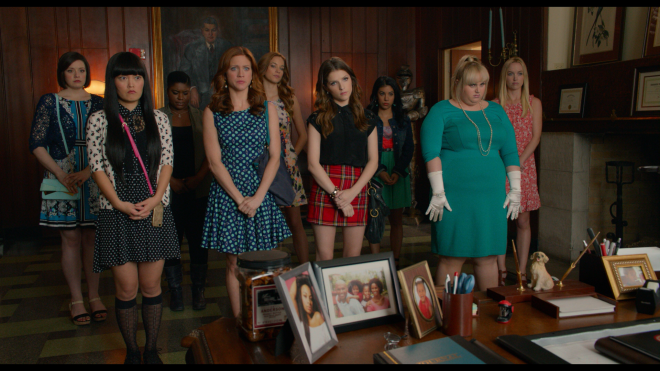 Universal Studios Home Entertainment brings Pitch Perfect 2 to 4K Ultra HD Blu-ray as a two-disc combo pack with a flyer for a Digital HD Copy. When redeeming said code via UPHE.com, Movies Anywhere and VUDU, owners are only given access to the SD and HD SDR versions. The dual-layered UHD66 disc sits comfortably opposite a Region Free, BD50 disc inside a black, eco-elite case with a glossy, embossed slipcover. At startup, the disc goes straight to an interactive menu screen with full-motion clips and music playing in the background.

The Bellas take to the international stage of 4K Ultra HD once again and earn top marks with a melodious and very satisfying HEVC H.265 encode. A higher but nonetheless comfortably bright contrast adds a really nice pop to the entire picture with dazzling, crisp whites throughout, but unlike its predecessor, the brightest brights are better controlled and feel a bit narrower, allowing for more visible details. However, there are still times when those whites seem hotter than normal, most notably in the daylight exteriors. On the other hand, specular highlights provide a realistic glow along the edges of various objects and buildings while also offering a bit more clarity under the intense stage lights, such as when Das Sound Machine makes their initial appearance. In that same scene, viewers will note the inky, luxurious blacks penetrating deep into the screen, giving the 1.85:1 image a nice three-dimensional feel while still retaining excellent visibility in the darkest shadows.

As with the first movie, the photography of Jim Denault benefits the most from the jump into 4K territory, displaying a more vibrant and flamboyant color palette. Primaries, in particular, are energetic and full-bodied with lots of animated, electrifying blues that shower the stage with energy and enthusiasm. Secondary hues are also richer and more dynamic, providing the picture with warmer overall tone. However, once again, there appears to be a slight reddish push, which tends to make the cast look as though they received a spray tan in a few scenes. Looking past this, though, facial complexions are revealing but not any more detailed than the HD version. In general, the 2160p video comes with an appreciable uptick in definition and resolution, exposing a bit more background information, but it's not a significant difference. Nevertheless, details are sharp throughout, making this 4K presentation a nice step-up from its Blu-ray counterpart.

The Bellas rediscover their voice with the vocal talents of a gifted and highly enjoyable DTS:X soundtrack that'll have fans cheering for an encore.

Admittedly, this is not the sort that could compete fairly with some of the very best in object-based audio, but for a music comedy, it surprisingly holds its own with a few bursts of activity in the ceiling channels. Much of this comes by way of the roar, cheers and applause of the crowd, but occasionally, the listener can feel fully immersed with birds chirping overhead or in the distance, such as when the ladies first arrive at Aubrey's retreat camp. The musical score and song selections also bleed into the front heights, creating a highly-engaging half-dome wall of sound while also exhibiting superb clarity and definition in the mid-range, allowing for note and pitch to be heard with outstanding distinction. The rest of the soundstage is layered with lots of background activity and excellent off-screen effects that pan across the three front channels flawlessly. Meanwhile, the low-end feels ample and hearty, providing the musical performances with appreciable weight and terrific presence, and vocals are precise and well-prioritized.

Borrowing a few notes from the first movie, Elizabeth Banks makes her directorial debut in Pitch Perfect 2, a satisfying sequel to the sleeper hit music comedy from 2012 and follows the Barden Bellas on yet another journey to save the a cappella troupe from national embarrassment. Although many of the jokes and much of the humor largely feels familiar, the follow-up is just fresh and witty enough to be a delightfully rewarding encore. The Bellas take to the Ultra HD stage with an excellent 4K HDR10 presentation and a strong DTS:X soundtrack that'll have owners wanting to sing along. Porting over the same set of supplements as its Blu-ray counterpart, the overall package is arguably most tempting for loyal fans but worth a look for others.

Sale Price 14.99
List Price 22.98
Buy Now
3rd Party 13.95
In Stock.
See what people are saying about this story or others
See Comments in Forum
Previous Next
Pre-Orders
Tomorrow's latest releases