Adapted from the book of the same name, Wonder is an uplifting and emotional tale intended for bringing audiences to tears, perfect for melting the bleakly cynical hearts in the crowd. The family drama finds a home on 4K Ultra HD thanks to a wonderful Dolby Vision HDR presentation, an excellent Dolby TrueHD soundtrack, and an average collection of supplements. The package is Recommended for the families in need of a heartwarming tale and those looking for more Dolby Vision HDR goodness.

When it comes down to it, Wonder is a sappy, melodramatic tearjerker, designed specifically for the purpose of pulling at the heartstrings and making audiences feel all gushy on the inside. And in that regard, the family drama about a homeschooled fifth-grader transitioning to a mainstream school accomplishes its intended goal without fail. But it's also exactly what we need at this moment to combat the dispiriting political climate of the last year and this bleakly cynical feeling of our future. Given the recent unfortunate events of the last few months, Stephen Chbosky's film is like a breath of fresh air, disconnected from everything else in the world. Based on the novel of the same name by R.J. Palacio, the irresistibly adorable and charming voice of August "Auggie" Pullman (Jacob Tremblay) immediately comforts viewers, sure to bring a smile to the most pessimistic among us. As he sweetly narrates his complicated birth with a darling sense of humor, we are instantly captivated, if not infected, by the spritely spirited optimism in his voice.

Within the first few opening moments, the unkindness of this world and that sense of gloom simply vanishes, and little Auggie becomes the center of our universe for the next couple hours, which is the central theme of the plot, adapted by Chbosky, Jack Thorne and Steve Conrad. And just to drive that point further, the filmmakers show Auggie to be an aspiring astronaut, preferring to wear a helmet whenever possible, imagining himself walking the school hallways with a hero's welcome and talking about Star Wars to anyone willing to listen. For a little boy with a rare medical facial deformity requiring years of surgeries, all of this, of course, also becomes Auggie's defense mechanism, a way of protecting himself from uncomfortable situations and the awful judgments of strangers. In spite of his contagious optimism, he is nonetheless very much aware of the looks and stares surrounding him, making the big change to public school all the more difficult and challenging since kids tend to be more blunt and honest in their judgments and questioning. 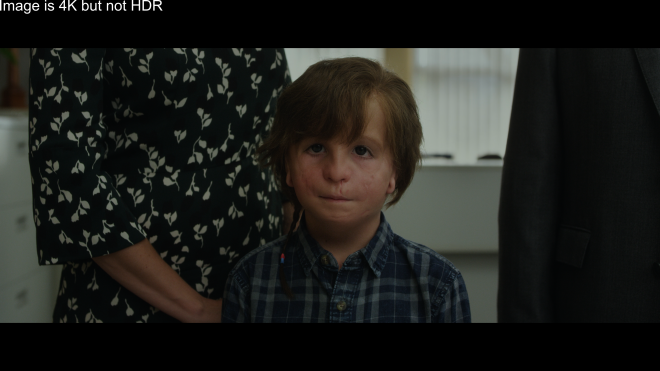 Such was the case on Auggie's first day, which was an unsurprisingly terrible experience he was ill-prepared for and unable to navigate through. Thankfully, he has terrifically supportive parents in the form of Julia Roberts offering a comforting, consoling heart and Owen Wilson always at the ready with fatherly wisdom for maneuvering through life's injustices. However, the film's focus is less on the A-list stars serving a familiar, if not also clichéd, role and more on our little hero's peers. Our attention is steered towards the other kids, like older sister Via (Izabela Vidovic) who warned audiences of her brother's unintended gravitational pull and has made as many sacrifices as her parents, namely not taking it personally when she feels neglected by her parents. We also meet Via's childhood best friend Miranda (Danielle Rose Russell), who struggles with figuring out her place on this planet, let alone within the Pullman family, and Jack (Noah Jupe), who eventually becomes Auggie's best friend but wrestles with also being socially accepted by their peers.

Granted, the entire plot is familiar with a predictable end result, but the filmmakers manage to keep Wonder an engaging and, well, wondrous journey through life's tests from the perspective of a child whose difficulties are objectively more taxing than most. Ever in danger of feeling prosaic and hackneyed, Chbosky maintains our attention on the kids, and what a wonderful ensemble of talented kids they are! And in shifting the narrative voice from Auggie to those kids surrounding him — once again, making him the inadvertent center of everyone's universe — we become witness to a strength, perseverance and an optimism that doesn't perish beneath the weight of the most arduous moments. As kids are wont to do, they compare their struggles to Auggie's challenges, and in doing so, audiences are essentially asked to do the same. Corny and maudlin as that may sound, even knowing this before walking into the film, it is nonetheless poignantly inspiring and uplifting to watch unfold. Auggie wins our hearts as we cheer him to heroically overcome those obstacles that dare to bring him down.

Lionsgate Home Entertainment brings Wonder to 4K Ultra HD Blu-ray as a two-disc combo pack with a flyer for an UltraViolet Digital Copy, which can be redeemed via movieredeem.com or through VUDU, giving users access to both the HD HDX and Dolby Vision HDR versions. The triple-layered UHD100 disc sits comfortably opposite a Region A locked, BD50 disc inside a black, eco-vortex case with a glossy slipcover. At startup, the disc goes straight to a static menu screen with full-motion clips and music playing in the background.

Little Auggie spreads his infectious optimism and sense of wonder to 4K Ultra HD with a spectacularly beautiful HEVC H.265 encode in Dolby Vision HDR. Shot on the Red Weapon Dragon camera system but later mastered to a 2K digital intermediate, the freshly-minted transfer displays gloriously brilliant contrast and razor-sharp definition throughout. The picture is continuously showered in crisp, immaculate whites, from the clothing to random sheets of paper, allowing for every minute object decorating the background in either the Pullman house or the classroom to be perfectly visible. Individual bricks of buildings and the tiniest cracks in the asphalt are striking, the smallest thread in costumes is plain to see, and every scar and blemish is easy to make out. A few spots here and there slightly bloom a tad too hot and washing some of the finest features, such as the clothing during the stage play, but overall, specular highlights are gorgeous with a tight, narrow glow in peak luminance, which is especially appreciable in bright daylight exteriors.

Presented in its original 2.39:1 aspect ratio, the 4K presentation also proudly struts through the hallways of UHD with exceptional brightness levels, which is especially noteworthy during the many conversations in the Pullman household where cinematographer Don Burgess went with a natural, low-lit atmosphere. Viewers can appreciate the silky rich blacks in the hair and clothing of actors, and inky midnight shadows penetrate deep into the screen with outstanding gradational details in the darkest areas and distinct differences between the various shades. Burgess also shot the family drama with a vibrant, picturesque palette to keep even the saddest moments from becoming too overwhelming. Primaries, in particular, are flamboyant and animated, making for some beautifully arresting photography in a few sequences. Meanwhile, secondary hues are richly-saturated with a good deal of variance, though not as much as we've seen in other recent titles. Nevertheless, purples and pinks are energetic while the sun's rays come with a lovely yellow-orange glow, making for a marvelous 2160p video in Dolby Vision.

Accompanying the outstanding video is an excellent 7.1 Dolby TrueHD soundtrack that adds a great deal of emotional depth to the story. Given that it's a character-driven family drama, much of the attention and action occupies the soundstage, delivering precise, distinct dialogue reproduction with exemplary inflections in the voices during the most moving sequences. The front-heavy design exhibits great clarity and separation in the upper ranges, of which there are only a few such moments, with great balance and movement between the channels, providing the film with a wonderful sense of space and presence. The lower ranges are not particularly noteworthy, but bass is nonetheless adequate with a few mildly strong, room-energizing instances during the song selections, giving the lossless mix some appreciable weight. As would be expected, there isn't much happening in the surrounds, but several outdoor sequences occasionally supply discrete ambient effects that nicely expand the soundfield, making for a very nice listen given the material and genre.

Audio Commentary: Director Stephen Chbosky is joined by author R.J. Palacio, and the two spend most of the time praising the performances and the uplifting nature of the plot while citing differences from the book.

Summer of Fun (HD, 58 min): Five-piece doc with interviews of the cast, crew and author on various aspects of the production, from the adaptation and casting to the plot's themes and makeup effects.

A Child's Sense of Wonder (HD, 13 min): Focused piece on the kids with their thoughts and performances.

What a Wonderful World (HD, 13 min): On the stage design and shooting locations.

At its heart, Wonder is a sappy, melodramatic tearjerker, designed specifically for the purpose of pulling at the heartstrings and making audiences feel all gushy on the inside. And to that effect, the family drama about a homeschooled fifth-grader transitioning to a mainstream school accomplishes its intended goal without fail thanks to some amazing performances by the young cast and strong direction. The movie finds a home on 4K Ultra HD with a wonderful, near-reference Dolby Vision HDR presentation and an excellent Dolby TrueHD soundtrack. With an average collection of supplements, the overall package is recommended for any families looking for a heartwarming tale and those needing more Dolby Vision goodness.