Angelina Jolie reprises her role as the video game heroine in Jan de Bont's Lara Croft: Tomb Raider — The Cradle of Life and brings Gerard Butler along for the ride, turning in an unexpectedly better action adventure flick than the first. The 2003 sequel raids 4K Ultra HD with a great-looking Dolby Vision HDR presentation, a surprisingly immersive DTS-HD MA 5.1 soundtrack, and the same set of supplements as the Blu-ray release, making the overall UHD package Worth a Look for treasure hunting enthusiasts.

The majority of the men in the world of Lara Croft are immorally corrupt wrongdoers. They are driven, in large part, by a single-minded greediness that sees profit in possessing other people's cultures, an indifference to the importance of preserving history rather than rewriting it and a seemingly innate desire to dominate the natural world for personal self-interests. In this fictional universe, which clearly takes not-so-subtle inspiration from the real one, the men are ultimately grown boys at the playground bullying other kids to fork over their toys and telling everyone they can't play. In fact, the mean boy will mash those toys into his own creation and resell them back to those same kids, and in The Cradle of Life — a title pregnant (no pun intended) with more meaning when considering the above — the one-dimensional bully is portrayed by Ciarán Hinds. The otherwise respectable actor unironically plays the scientist turned bio-terrorist Jonathan Reiss like a caricature of an 80s Bond villain, down to the slick back hair and expensive suits.

Reiss' goal for world-domination comes by way of unearthing Pandora's Box — which, of course, as is typical of most every action-adventure blockbuster, is not a myth as much as a small clue to a larger treasure map. The intention is to weaponize the box's contents, the destructive, malevolent ills the world already suffers from, and profit from also providing the only cure. Why Reiss didn't simply ask for a career with the Umbrella Corporation is, frankly, the bigger mystery here. Anyhow, he is followed by a small band of devoted minions, so stereotypical and clichéd that they literally do nothing of interest apart from scowling scarily at our heroine, shoot guns with terrible aim except when convenient and can't fight worth a damn. The only man giving Lara — and the audience — some glimmer of hope that a few good men may be honorable and scrupulous is Gerard Butler, a retired military man turned mercenary, but the story frequently pauses to remind us of his moral ambiguity and that he once broke Lara's heart. 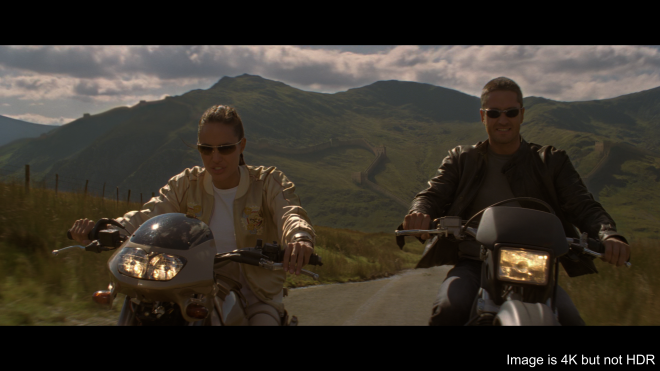 But before scorning the script's blasé flip-flopping — a poor attempt at keeping audiences invested — we must first address the paradox that is Lara Croft. Angelina Jolie reprises her role as the video game heroine for the second and final time, and as before, she does rather well even if her British accent is, at times, cringe-worthy. However, no matter Jolie's reluctantly praise-worthy performance, this is still a character which is at odds with itself, wanting to be seen as a serious female hero for the 21st Century, someone capable of dishing it out with the boys as well as she receives. But at the same time, her skills, expertise, and accomplishments are continuously undermined by her physical appearance, as though we're never allowed to forget the voluptuous package. She remains an object for the camera to gawk at where even the fight choreography is designed to view Croft as a carnalized and desirable badass. Ironically, she's a fantasy of the perfect tomboy, a woman who can play as well as the boys but retains her fetishized femininity.

Granted, in The Cradle of Life, director Jan de Bont, and his team make the effort to minimize this rather problematic dilemma of the character, starting with the subtle change in her costumes, which are not quite as revealing and slightly more appropriate for both the occasion and the climate. By placing a bit more emphasis on Croft's intelligence and capabilities, the sequel is arguably the better of the two movies with action sequences that are also more entertaining than its predecessor, despite still relying somewhat on Jolie's physical attributes. But the slight improvements are not enough to hail this production a satisfying winner either since our heroine is still made to combat a two-dimensional villain with goons that offer a deadlier challenge. There is more chemistry between Jolie and Djimon Hounsou than with Butler, and the former are only really good friends. Outside of the mythology, there's no sense Pandora's Box is of any significant danger, making for a decent action-adventure flick that could also potentially put one to sleep.

Paramount Home Entertainment brings Lara Croft: Tomb Raider — The Cradle of Life to 4K Ultra HD Blu-ray as a two-disc combo pack with an UltraViolet Digital Copy, which can be redeemed via ParamountMovies.com, giving users access to a 1080p HD copy, or VUDU, which unlocks the 4K Dolby Vision version. Inside the black, eco-vortex case with glossy slipcover, the dual-layered UHD66 disc sits comfortably opposite a Region Free, BD50 copy. At startup, viewers are taken directly to a static screen with the usual selection along the bottom and music playing in the background.

The hunt for Pandora's Box reaches Ultra HD territories with a great-looking and often-beautiful HEVC H.265 encode in Dolby Vision HDR, offering fans a welcomed improvement over its Blu-ray counterpart. Likely upconverted from the 2K digital intermediate, the transfer shows excellent definition and clarity for a majority of the runtime, revealing every wrinkle and blemish beneath Gerard Butler's five o'clock shadow and the tiny sweaty pores in the rest of the cast while Angelina Jolie, of course, looks flawless. Viewers can also better make out the smallest details in the architecture of various ruins, the buildings and in the clothing. A very thin layer of grain washes over the 2.35:1 image, giving it a welcomed film-like appearance. A few long wide shots are understandably softer than others, but the worse culprit are the several poorly-aged CG effects and the matte painting backgrounds, which are made all the more apparent and distractingly fake in higher resolution. Added to that, there are several instances of mild aliasing along the sharpest edges.

Much of that is easily forgiven, however, when noting the dramatic improvement in contrast, delivering a much brighter and energetic picture overall. Whites are sharp and brilliant without a hint of blooming, making the glow of the clouds against a blue sky look like pictures from a postcard. Specular highlights are even more impressive, tightening that aforementioned glow so that we can still see every minute detail in the clouds and the filaments of bright headlights shining directly into the camera while providing the metallic edges with a realistic shine and gleam. Black levels are absolutely rich and inky, from Jolie's silky hair and leather gun holster to the deepest darkest shadows of the underground cave or the strange monsters guarding its entrance. The overall palette shows a subtler boost and increase, but it's there nonetheless, displaying a bit more variety in some of the sunset shots and facial complexions appear more accurate to the climate. Primaries are richly saturated and full-bodied, making this a great-looking 4K presentation.

Lara Croft swings into action equipped with the same DTS-HD Master Audio 5.1 soundtrack heard on the previous Blu-ray edition from a few years back, and it has aged fantastically well. In the opening action sequence while our heroine explores an underwater Greek temple, the surrounds are kept busy with the sound of water droplets falling all around and the voices of characters echo throughout the room. And the rest of the design comes with various atmospherics, from local wildlife to the bustling noise of the city, discretely panning between the channels. When applying the receivers' Dolby Surround or DTS: Neural:X up-mixing functionality, those same effects convincingly travels into the overheads, maintaining a satisfyingly immersive soundfield for a majority of the movie's runtime.

Across the front soundstage, background activity moves between three channels with effective directionality, generating a broad, spacious sense of space. The mid-range is quite dynamic and fairly extensive, though the design is never really pushed too far into the upper frequencies. Nevertheless, the action maintains excellent clarity and detailing while vocals are distinct and crystal-clear in the center. The low-end isn't particularly impressive or noteworthy given the fantasy visuals, but there's plenty of mid-bass oomph that adequately provides the action with some weight and depth.

Audio Commentary: Director Jan de Bont rides solo for this commentary track where the filmmaker talks extensively on the technical aspects of the production, his creative process and the various challenges.

Behind the Scenes (SD): Six short featurettes with a closer look at different aspects of the production.

Music Videos (SD): A pair of music videos, starting with Korn's "Did My Time" and followed by The Davey Brothers' "Heart Go Faster."

For Lara Croft: Tomb Raider — The Cradle of Life, director Jan de Bont takes over the reigns and shockingly delivers an action-adventure popcorn flick that's more entertaining than its predecessor. Bringing Gerard Butler along for the ride, Angelina Jolie reprises her role as the video game heroine, but this time around, the character feels as though taken slightly more serious as a capable and intelligent leading protagonist of her own franchise. The movie raids Ultra HD tombs with a great-looking 4K Dolby Vision HDR presentation and a satisfyingly immersive DTS-HD MA soundtrack. The same set of supplements are ported over, but fans of the franchise and the character will be more than happy with this unearthed treasure.