Although often remembered for nauseating audiences everywhere, Matt Reeves's Cloverfield still delivers the jaw-dropping thrills of witnessing a gigantic monster demolish the streets of Manhattan. Ten years later, the found-footage disaster feature continues to wreak havoc in home theaters on 4K Ultra HD thanks to an excellent Dolby Vision HDR presentation and a thunderous, earth-shattering Dolby TrueHD soundtrack. Porting over the same supplements as the Blu-ray, the 4K package is recommended.

Of the many found-footage movies to hit theaters since The Blair Witch Project popularized the subgenre, Matte Reeves's Cloverfield remains one of the better and more entertaining projects. Few have mustered a decent enough plot to warrant the need of a hand-held camera and keep audiences invested — that is, if they're not too preoccupied with feeling dizzy from the shaky-cam effect or fighting a sudden urge to vomit. Granted, screenwriter Drew Goddard (The Martian, The Cabin in the Woods) doesn't exactly give us the best explanation for running through the streets of Manhattan while simultaneously surviving a monster attack. But at least, it's a believable one. The dopey, socially-awkward T.J. Miller is made responsible for recording Michael Stahl-David's farewell party, in spite of Jessica Lucas's disappointment and to the annoyance of Lizzy Caplan. When disaster finally strikes, Miller answers his friends' pleas to put the camera down with a need to document everything because people will want to know how it all went down.

Frankly, he's not wrong. We naturally gravitate to images of misfortune, chaos, and tragedy equally as much as the breathtaking, majestic and wondrous. Miller is right! We want to see all the juicy, gory details, and Cloverfield delivers in that respect with an enormously jaw-dropping creature that can rip off the head of the Statue of Liberty, destroy the Brooklyn Bridge with a whip of its tail, collapse the Woolworth Building and spew voracious creepy-crawlies from its back. And there's something to be said about keeping the origins of the monster a complete mystery, a plot detail some viewers may not care for or find utterly frustrating. But in the context of the movie, it makes sense since the disaster is only just unfolding and the military is just as much in the dark. It's also a quick and easy way to have audiences side with a group of kids wanting only to survive the pandemonium and save their friend Beth (Odette Yustman). It's a simple yet effective device that works well for this new take on the classic creature-feature motif meant to be enjoyed just for the thrills. 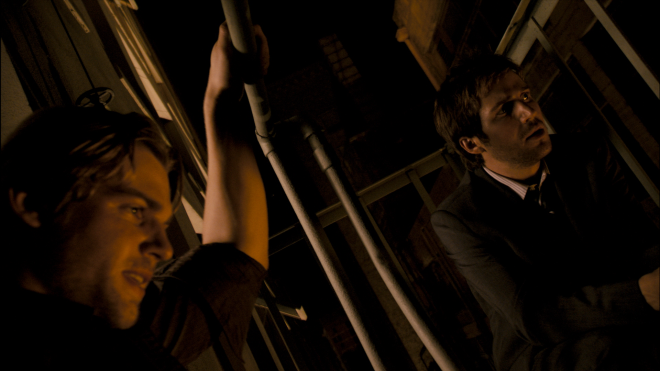 For a more in-depth take on the movie, you can read our review of the standard Blu-ray HERE.

Paramount Home Entertainment brings Cloverfield to 4K Ultra HD Blu-ray as a two-disc combo pack with an UltraViolet Digital Copy, which can be redeemed via ParamountMovies.com or VUDU, giving users access to the 1080p HDX version only. Inside the black, eco-vortex case with glossy slipcover, the dual-layered UHD66 disc sits comfortably opposite a Region Free, BD50 copy. At startup, viewers are taken directly to a static screen with the usual selection along the bottom and music playing in the background.

A gargantuan subterranean monster runs amok through the streets of New York with an excellent HEVC H.265 encode in Dolby Vision HDR. Granted, given the particular style and photography for achieving a specific effect, the 4K transfer won't provide the sort of wow factor we've come to expect of the format, but it is nonetheless faithful to the filmmaker's intentions and the results overall offer several appreciable improvements to make this a worthy purchase.

Originally shot on digital cameras that max at 1080p resolution, definition and clarity remain relatively similar to its Blu-ray counterpart. There are many scenes that look a tad sharper and in better focus, to be sure, but the difference is not terribly significant. Fine lines in the clothing or in the city streets are more distinct, and various random objects, such as debris on the ground and the furniture decorating the interior of buildings, are more perceptible. Nevertheless, given the limitations of the source material itself, a good chunk of the movie falls on the softer side of things, with many scenes looking blurrier than others.

Where the movie really benefits from the jump to Ultra HD is the higher dynamic range. Whereas the previous release displayed a good deal of blooming and clipping in the brightest areas, this 4K presentation shows significantly better contrast with more intense and luminous whites. Specular highlights also appear tighter and crisper, allowing more detailing within the hottest spots, mainly the light sources shining directly into the camera. Again, although the source doesn't allow for brightness levels to truly shine, blacks are nonetheless richer and darker throughout without sacrifices the finer details, even during the most well-lit moments, such as when the military is bombarding the monster with gunfire. The movie was never particularly colorful to begin with and likely never will be, but once more, the move to Dolby Vision proves to be a splendid benefit, making primaries noticeably more vibrant and full-bodied while warmer, stronger secondary hues provide the orange-teal palette with more life, a homelier yellow sheen and natural flesh tones in the entire cast.

The 4K image may not be particularly impressive, but the overall presentation is nonetheless a nice step up.

Paramount has opted to port over the same Dolby TrueHD soundtrack heard on the Blu-ray, and while an object-based audio option would have been a much-welcomed upgrade, the lossless mix remains pure reference-quality. A wide, incredibly spacious soundstage showers the screen with a variety of background and off-screen activity that's continuously sharp and detailed, even during the loudest, ear-piercing moments. Dialogue is crisp and precise, except where it deliberately is not. The design is also incredibly busy with sound effects discretely panning from one channel to the next and truly come alive when applying the receivers' Dolby Surround or DTS: Neural:X up-mixing functionality. But on a final note, Cloverfield also remains the go-to disc for testing a subwoofer's capabilities because there are many moments, such as the bridge collapse, that dig down to 10Hz at high decibels, energizing the room with terrifying waves of bass. Other than warning neighbors before watching, be careful not to blow out your subwoofer (bass chart).

Celebrating its 10th Anniversary this month, Matt Reeves's Cloverfield remains one of the better found-footage horror features since the subgenre gained popularity at the turn of the century. Although the characters could have benefitted from better development and time, the simple, straightforward plot is engaging enough to keep focus on delivering the thrills, which is both wondrous and terrifying. The creature-feature wreaks havoc on Ultra HD with an excellent 4K Dolby Vision presentation that offers a great improvement over its Blu-ray counterpart, and it includes the same reference-quality, earth-shattering Dolby TrueHD soundtrack as before. Porting over the same set of supplements as well, the overall package is recommended for fans of the movie and those hungry for more HDR goodness.

Sale Price 11.99
List Price 25.99
Buy Now
3rd Party 5.47
In Stock.
See what people are saying about this story or others
See Comments in Forum
Previous Next
Pre-Orders
Tomorrow's latest releases