Jumanji: Welcome to the Jungle upgrades the classic children's book to the video game age and surprises audiences with a hilariously fun and weighty adventure that's astonishingly better than its predecessor. The sequel swings into Ultra HD home theaters with a gorgeous 4K Dolby Vision presentation and a reference-quality Dolby Atmos soundtrack, but a small set of supplements. Nevertheless, the overall package is Recommended for a great family movie night and 4K UHD enthusiasts.

Jumanji: Welcome to the Jungle is evidence of me not only growing old but that times have drastically changed in a direction I never would have predicted. I'm not talking about young moviegoers who grew up watching the original movie suddenly realizing the Robin Williams fantasy favorite is turning 23 later this year. I'm referring to the movie's title alluding to Guns 'N Roses' "Welcome to the Jungle" and the actual song later used during the end credits, which was also used for the promotional trailers. Thirty years ago, the hard-rock band was considered risqué and indicative of a troubled, sinful youth, and featuring their song in a family-friendly adventure flick would have been quite controversial. But here we are with a movie that also features penis jokes and a verbal gag about one character's first experience with an erection. Perhaps even more surprising is that the adventure production about modern adolescence is a total blast, one of the most fun movies of 2017 and bordering on genius, becoming the rare sequel that's better than the original.

Part of the plot's brilliance is the characters themselves. They are four uniquely different teenagers with four distinctly contrasting personalities and personal dilemmas they are tasked with overcoming, which is in line with both the book and its 1995 adaptation's theme. Our central protagonist is Spencer (Alex Wolff), the archetypal nerd with allergies and phobias to nearly everything — too afraid to live life and take risks, basically. The most dangerous thing he's ever done is help his childhood friend "Fridge" (Ser'Darius Blain), the stereotypical football jock who's more brawn than brains, plagiarize an essay, which lands both boys in detention where Spencer discovers a vintage video game console. (The board game is apparently smart enough to adapt to the times and needs of the younger generation.) At detention, they meet Martha (Morgan Turner), who earlier refused to participate in P.E. class and insulted the teacher, and Bethany (Madison Iseman), the arrogant, self-centered popular girl who can't live without her phone, even during a quiz. 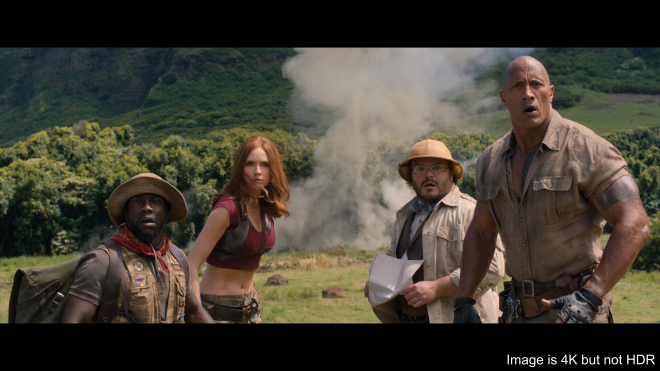 Granted, it's easy to predict and see the conclusion charging at us from a mile away. We don't need a "curvy" cartographer to read where this map will lead audiences. But as with any good life-altering adventure worth taking, it's not so much about the destination as it is the journey getting there that makes it memorable. For one, Dwayne Johnson is reunited with Kevin Hart, a highly-charismatic pair that is an absolute joy to watch on screen and whose exchanges are a major source of comedy, particularly seeing Johnson as the reluctant, insecure Spencer learning to be more assertive and self-assured. While Hart's Fridge grapples with using his intelligence over his size, Karen Gillan as Martha discovers the joy of being physically active and more confident about her appearance. As Bethany, Jack Black is arguably the film's highlight doing an excellent job at being a typical contemporary teenage girl, but when Nick Jonas makes an appearance, she comes to know the value of giving and sacrificing a life for another.

Again, it's difficult to construe any of this as spoilers since the plot lays it all bare up front from the start, and director Jake Kasdan (Bad Teacher, Orange County) doesn't shy away from it, making its themes as uncomplicated and straightforward for the youngest amongst us to understand. One of the funniest scenes of Jumanji: Welcome to the Jungle is Bethany trying to teach Martha how to use her new physique to draw the attention of two guards. What makes this the production's most telling and terrifically memorable moment is that the lesson comes from Jack Black, a man telling a young woman how to appear more feminine and sexy using the most absurdly stereotypical mannerisms. Seeing the advice fail miserably is not only hilarious but wonderfully beautiful to watch since Martha comes to realize she should trust in herself and her abilities than simply playing a prescribed role. Ultimately, the sequel surpasses its predecessor in nearly every way, including a hysterical plot with thoughtful themes to inspire both kids and adults alike.

Sony brings Jumanji: Welcome to the Jungle to Ultra HD Blu-ray as a two-disc combo pack with a small booklet for other internet-based activities and a code for an UltraViolet Digital Copy. When redeeming said code via sonypictures.com and MoviesAnywhere, users have access to a 1080p HD copy, and VUDU unlocks the 4K Dolby Vision version with Dolby Atmos. The dual-layered UHD66 disc sits comfortably opposite a Region Free, BD50 disc, and both are housed inside a black, eco-cutout case with a glossy, lightly-embossed slipcover. At startup, viewers are taken to a generic static screen with usual options along the bottom and music playing in the background.

Dr. Smolder Bravestone and his trusty sidekick Mouse run towards danger equipped with a gorgeous HEVC H.265 encode, flexing those Dolby Vision HDR muscles at every opportunity. Shot on digital cameras capable of 3.4K resolution and later mastered to a 2K digital intermediate, the freshly-minted transfer reveals razor-sharp definition in the surrounding jungle foliage, exposing the rough, cracking bark of the trees and the tiny veins of the leaves. From the individual whiskers on both Jack Black and Kevin Hart's faces to the distinct threading of the canvas-like costumes, fine lines are continuously distinct, even during fast-paced action sequences. Various buildings and structures in the game show their weathered age, and facial complexions appear healthy and accurate with outstanding lifelike textures. Only visible issue are some very mild instances of aliasing along the sharpest border, such as Shelly's round rim glasses or the edge of certain wooden structures, and there's a tad of posterization in the smoke of the Bazaar.

Presented in its original 2.39:1 aspect ratio, the 2160p video also comes with an extraordinarily bright contrast that still feels comfortable and natural, making the many exterior jungle shots really pop, sure to have a few viewers squinting at the screen. In fact, there are several demo-worthy moments, specifically the scenes at the Alan Parrish treehouse and while scoping the transportation shed, that deliver that sought-after looking through a window effect with the fluffy clouds in the sky radiating a crisp, sterile white. Specular highlights are not as particularly impressive as other new UHD releases, but they're nonetheless noteworthy, providing a realistic shine and glimmer along the edges of metallic objects while maintaining tight and narrow, allowing for excellent detailing within the hottest, brightest spots, like the glowing Jaguar's Eye. On the opposite end, black levels are exceptionally rich and stygian, which is immediately apparent in some of the casts' hair color and in Ruby's tight-fitting outfit. Dark, midnight-black shadows also maintain excellent detailing in the murkiest portions of the frame.

Being a family adventure comedy, the 4K presentation is expectedly lively and awash in a wide array of colors, starting with some sumptuous greens that bring the beautiful open vegetation of Hawaii to stunning vividness. The sky is always a blissfully relaxing and celestial blue while the red of Ruby's shirt is of a slightly darker shade than Mouse's flamboyantly red bandana. The safari clothing of everyone else also shows distinct differences with Bravestone's tight shirt looking dirtier and used compared to Shelly's combination of tan and sepia. The orange of torches and explosions come with awesomely fiery glow, and flesh tones appear natural to the climate with a very slight reddish appeal, making everyone look as though they've been out in the sun for a while. Sadly, there does not appear to be much more variation in the secondary hues, but the sunrise scene towards the end, however, shows a lovely, picturesque assortment of dark blues and magentas fading into the orange-yellow shine of the sun.

The fantasy sequel continues to surprise with its knapsack full of tricks, stepping up to the audio challenge by whipping out a marvelous, demo-worthy Dolby Atmos soundtrack that'll turn one's home theater into an exotic jungle.

At the start of the movie in the suburbs of Brantford, things are a bit more subdued and controlled, employing the sides and rears here and there to simply generate a sense of space. But once the kids and the audience are thrust into the wilderness, the entire sound system comes alive with the cries and shrieking chatter of birds everywhere. One early scene features a bird believably flying from back left corner of the room to the front left height channel and across the screen to the right front corner of the room. The rest of the movie is active with the propeller noise of the helicopter, the cracking sounds of thunder, bugs buzzing in every direction and the busy commotion of the Bazaar, completely immersing the listener with a fantastic hemispheric soundscape. Action sequences are layered with debris raining down, and Henry Jackman's enthusiastic score bleeds into all the channels, maintaining an awesome 360° soundfield.

Understandably, being a family comedy, much of the attention and action is sustained on screen with lots of background activity evenly spread across three front channels and front heights. With convincing off-screen movement throughout, the soundstage feels spacious and expansive, generating a continuously engaging half-dome wall of sound. The lossless mix also comes with distinct clarity and superb definition in the mid-range, exhibiting superb detailing and separation during the loudest, ear-piercing segments so that every action sequence remains perfectly audible. Most impressive and shocking is a powerful, varied and terrifically robust low-end that shakes, rattles, and rumbles with awesome magnitude and intensity, and the helicopter and rhino stampeded scene is a particularly excellent moment for demo purposes. Dialogue is crystal-clear and precise in the center, delivering excellent inflection and emotive intonation in the voices, even in the whispered, more intimate conversations.

Journey Through the Jungle (HD, 15 min): NPC character Nigel Billingsley hosts this making-of piece where he interviews cast & crew, tours the set and shooting locations, and compares it to the original film.

Surviving the Jungle (HD, 6 min): Focus on the fight and stunt choreography of three key scenes.

Book to Board Game to Big Screen & Beyond! (HD, 5 min): Cast & crew talk about the original movie and sneaking some Easter Eggs throughout the sequel.

Attack of the Rhinos! (HD, 4 min): All about how the visual and CG effects were done for completing the scene.

Starring Dwayne Johnson, Jack Black, Kevin Hart and Karen Gillan, Jumanji: Welcome to the Jungle picks up twenty years after the first movie and transports our four would-be heroes into a video game version of the original board game. The family action-adventure film pulls off an astonishing feat by being the rare sequel that's better than its predecessor and delivers an intelligent, thoughtful plot that's a total blast. The movie arrives on Ultra HD with a gorgeous 4K Dolby Vision presentation and a reference-quality Dolby Atmos soundtrack that brings the wilds of the jungle home. Although bonus materials are unfortunately on the light side, they are nonetheless decently entertaining, making the overall package recommended.

Sale Price 17.99
List Price 30.99
Buy Now
3rd Party 11.99
In Stock.
See what people are saying about this story or others
See Comments in Forum
Previous Next
Pre-Orders
Tomorrow's latest releases