Kingsman: The Secret Service introduced the world to Kingsman. In Kingsman: The Golden Circle, our heroes face a new challenge when their headquarters are destroyed and the world is held hostage. Their journey leads them to the discovery of an allied spy organization in the US called Statesman, and in a new adventure, these two elite, secret organizations band together to defeat a ruthless common enemy in order to save the world, something that's becoming a bit of a habit for Eggsy.

Before we're even given a chance to reacquaint ourselves with Eggsy Unwin (a charmingly perfect Taron Egerton), the rebellious hero of the first Kingsman movie, we're quickly thrust into the thick of the action in the Matthew Vaughn directed The Golden Circle. Charlie Hesketh (Edward Holcroft, who has somehow mastered the art of scowling with an arrogant smile), a former Kingsman recruit later turned enemy informant, attempts to kidnap Eggsy while also sporting a new mechanical arm with its own WiFi connectivity. The failed abduction quickly spirals into vehicular mayhem down the busy streets of London's nightlife, as the undercover taxicab weaves through traffic, narrowly missing every other car on the road, while the two former trainees duke it out in the backseat. For the next few minutes, the entire screen erupts with impossible stunts and amplified action made possible thanks to the latest in CG technology — literally, what can be imagined can now be made a reality. And for this sequel, obviously going for bigger and better, Vaughn and his crew let their imaginations run wild and attempt to top themselves at every turn.

The fun and success of this satirical comedy adventure is its familiarity with the espionage thriller, borrowing specifically and heavily from the James Bond franchise, while also both embellishing and subverting the very spy genre it aspires to take part in. It doesn't so much take apart the tropes for some deeper analysis, as it simply pushes them to their extreme absurdity and relishes in the illogical silliness of it all. In this opening, edge-of-your-seat moment, Vaughn clearly takes delight in defying expectations, not giving audiences the usual beginning where we catch up with our hero after the events of the first movie or provide the customary exposition that explains the new villain who heads a criminal organization hell-bent on world domination. Instead, we're given a long action sequence that feels like a live-action cartoon while setting the plot into motion, but still leaving us in mystery. It's only after the threat is supposedly resolved that we learn Eggsy has taken the title of Galahad, is in a committed relationship with the Crown Princess Tilde of Sweden (Hanna Alström) and feels more threatened by the thought of meeting her parents than nearly being killed. 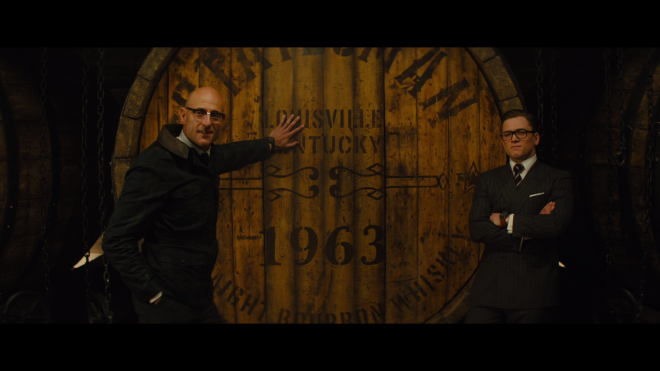 To expect anything less than complete absurdity in a sequel inspired by a wildly fantastical graphic novel is itself a ridiculous expectation, especially given its stupendously bombastic opening. These movies are about reveling in the insanity of fights, explosions, and gunfire no mere human could ever possibly survive and which Bond only wishes could ever walk away from while wearing a clean-cut, expensive suit. And in keeping with the preposterous, we need an equally fanciful criminal mastermind capable of presenting our hero with the actual prospect of failing to save the world, someone with the charisma to devise an elaborate and darkly perverse plot while harboring a unique deformity, either physical or psychological. Thankfully, Julianne Moore as the leader of the world's largest drug cartel Poppy Adams slides into the role like a comfortable pair of warm house slippers, a sickly sunny and always smiling crooked genius with a penchant for 1950s Americana and a love for Elton John. Ms. Moore is an absolute delight as she cooks a hamburger from scratch using the fresh meat of her enemies to feed her new recruits as a test of loyalty.

In The Golden Circle, Moore's wickedly evil charm is her nostalgic wholesomeness disguising a cleverly topical scheme, one which ruins the Kingsman to their foundation, both literally and figuratively. Partnering with tech wizard Merlin (Mark Strong, who gives a memorably outlandish rendition John Denver's "Take Me Home, Country Roads"), Eggsy travels across the Atlantic to collaborate with another secret agency hidden beneath a whiskey distillery in Kentucky, known as the Statesman. There, we meet another ensemble of cartoon super spies lead by a grumbling Jeff Bridges grouchily growling orders to gadget guru Halle Berry, stern party animal Channing Tatum and the ultra-cool, lasso-wielding Pedro Pascal. At times, the movie runs the risk of feeling bloated and somewhat episodic, swiftly jumping from one adventure to the next, but Vaughn keeps the momentum focused on a single objective while giving Eggsy plenty of space to grow as a character. It's an outrageously fun follow-up that asks us to revel in the absurdity because the war on drugs has never been this ridiculously silly.

20th Century Fox Home Entertainment brings Kingsman: The Golden Circle to Ultra HD Blu-ray as a two-disc combo pack with a flyer for a Digital HD Copy, which can be redeemed via FoxDigitalMovies.com but only available in HD / SDR and HDX on VUDU. The dual-layered UHD66 disc sits comfortably opposite a Region Free, BD50 disc inside a black, eco-cutout keepcase. At startup, the UHD goes straight to the main menu screen with full-motion clips, the usual options along the bottom and music playing in the background.

The Kingsman save the world once again from a sadistically perverse criminal mastermind on 4K Ultra HD Blu-ray with a surprisingly mediocre and ultimately underwhelming HEVC H.265 encode. Much of the letdown can be attributed to the deliberately stylized cinematography of George Richmond, which, when seen from this perspective, can be argued as faithful to the intentions of the filmmakers. Nevertheless, the picture quality doesn't fare well against better-equipped UHD agents looking to dominate the still-relatively-new format, looking significantly softer and blurrier than would be expected of a freshly-minted transfer. Granted, it offers a decent step up over its Blu-ray counterpart, showing a tad better resolution overall and well-defined lines in the fine-stitched suits and various other articles of clothing. But in the end, coming from a 2K digital intermediate that was struck from an Arri Alexa digital source capable of up to 3K, the picture looks and feels every bit like an upconverted transfer with visible noise at times and a few instances of mild aliasing.

Even if one were to forgive the transfer these shortcomings, one must still contend with a contrast that is on par with its HD SDR counterpart. Whites seem cleaner with a bit more punch and dazzle to them, such as in the button-down shirts of some characters or in the snow of the Italian mountains. But they also seem to run hotter than normal and occasionally overcooked in a few sequences, essentially washing away some of the details. Also, there isn't much in terms of specular highlights, though some might note a better, tighter glow around the edges of metallic objects, it is also at the cost of the finer features like the clouds or the sky in sunny daylight exteriors, within various light sources and even in the glare on the faces. Black levels are a bit richer and more intense with better, truer shadows and strong visibility within the darkest corner of the frame, providing the 2.39:1 image with appreciable dimensionality.

Where the 4K presentation reveals a marked improvement over the Blu-ray is the wider color gamut, showing a richer and more vibrant selection that makes the video really come to life. Being based on a colorful graphic novel series, the filmmakers went with a vibrant palette, showering the screen with radiant, animated primaries. The 50s cherry red adorning Poppy's jungle hometown is mesmerizing and more cartoonish while the green in the surrounding foliage is lively and energetic. The 2160p video is awash in a yellow and golden amber sheen reflecting the plot's themes, giving Eggsy's orange velvet dinner jacket a flamboyant splendor and Poppy's insignia tattoos a deeper yellow brilliance. Then again, this stylized look also makes everything feel oversaturated, pushing the red spectrum to the extreme of making facial complexions largely appear sunburnt and unnatural.

On Ultra HD, the colorfully cartoonish sequel has been upgraded to an excellent Dolby Atmos soundtrack that also doesn't sound much different than its DTS-HD counterpart. Don't get me wrong, the track definitely offers some improvements worth enjoying with specific musical numbers fans will absolutely love blasting as loud as possible.

The design is bombastically and deliberately aggressive during action sequences, but much of it is maintained either in the surrounds or in the fronts. When debris from explosions scatters everywhere, some of it lightly bleeds into the ceiling speakers and across the room. The swish from either the lasso or the whip rushes between the sides and rears with a light echo heard above the listening area. With passionate, animated enthusiasm, the song selections are far more engaging, spreading into the overheads and surrounds in equal measure. However, quieter, dialogue-driven scenes are sorely lacking and noticeably silent, which is arguably understandable but also somewhat dissatisfying for an action-adventure flick when those same scenes take place in the jungle or the bustling city.

On the other hand, the soundstage is sprawling with a variety of background activity, generating an expansive, spacious wall of sound. Providing a more notable difference between the two formats is a mid-range that takes advantage of the extra breathing room, exhibiting a slightly crisper, more detailed clarity in the music and maintaining superb distinction and separation during the loudest, ear-piercing moments. Displaying excellent balance and fidelity from start to finish, the rambunctious song selections enjoy extraordinary, room-penetrating clarity. Atmospherics occupy the off-screen space convincingly while other action effects effortlessly pan across the three front channels. Amid the sonorous mayhem, vocals remain precise and well-prioritized. Low-frequency effects feel a tad more thunderous and commanding, giving the action sequences and bumping music a great sense of presence and couch-rattling oomph.

Directly following up on the events on the first movie, Kingsman: The Golden Circle immediately throws the audience into the thick of the action, learning about what the heck is going along with the film's heroes. Taron Egerton and Mark Strong reprise their roles in an action-adventure sequel dripping in tongue-in-cheek absurdity and over-the-top silliness while introducing new well-endowed spies Channing Tatum, Pedro Pascal, Halle Berry and Jeff Bridges to do battle against the wickedly charming and delightfully sinister Julianne Moore.

This 4K Ultra HD Blu-ray arrives with a strong 4K video presentation. Though the picture quality isn't a massive jump from its HD SDR counterpart, it nonetheless offers a few noteworthy improvements that'll please some. On the other hand, the sequel has been upgraded to an excellent Dolby Atmos track, joined by the same collection of supplements featured on the Blu-ray. Nevertheless, the overall package is worth a look for fans.

Sale Price 15.99
List Price 24.99
Buy Now
3rd Party 2.73
In Stock.
See what people are saying about this story or others
See Comments in Forum
Previous Next
Pre-Orders
Tomorrow's latest releases