American Assassin follows the rise of Mitch Rapp (Dylan O’Brien), a CIA black-ops recruit under the instruction of Cold War veteran Stan Hurley (Michael Keaton). The pair is then enlisted by CIA Deputy Director Irene Kennedy (Sanaa Lathan) to investigate a wave of apparently random attacks on both military and civilian targets.  Together, the three discover a pattern in the violence, leading them to a joint mission with a lethal Turkish agent (Shiva Negar) to stop a mysterious operative (Taylor Kitsch) intent on settling a personal and professional vendetta that could have cataclysmic results. 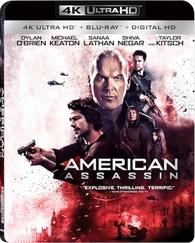 Throughout the late 90s and into the early 21st Century, a series of critical and financial flops relegated Michael Keaton's career from marquee headliner to supporting character appearances, even coming close to becoming synonymous with box-office bombs at times. But with the unexpected virtue and success of Alejandro G. Iñárritu's Birdman, Keaton's popularity suddenly experienced a resurgence, followed by noteworthy starring roles in Spotlight and The Founder while also placating possible condemnation by enthusiastic fanboys in Spider-Man: Homecoming. In other words, he's recently demonstrated excellent dramatic chomps to once again draw attention. Sadly, the actor largely better remembered for his comedic performances and as Batman has used this upward momentum to star in arguably one of the year's worst movies: the generically titled American Assassin. If the last few decades have proven anything, Mr. Keaton will, of course, recover from this tediously dull debacle, and with stronger, better roles in the future, this mind-numbingly cliché actioner will fade to distant memories, à la Jack Frost and Herbie: Fully Loaded.

Based on Vince Flynn's political thriller novel, Keaton shows up about a quarter into the story as former Navy SEAL soldier Stan Hurley, a seasoned and bitterly hardened veteran of the Cold War era. Spending most of the time callously bellyaching with a permanent apathetic scowl like an old man sitting on his porch yelling at local kids to never step on his lawn, Keaton's performance is arguably the production's most memorable aspect, amazingly good enough to turn this cure for insomnia into mildly tolerable. As though channeling the ghost of Clint Eastwood's Walt Kowalski, Keaton comes in with a heavy gloomy cloud hanging above his head, sulking about while hollering orders to the soldiers under his command. While other characters are made to essentially belch out tedious exposition — one of several flaws to the overall production, failing to rely on the good-ole adage of "show, don't tell" — the rancorous, hard-as-nails veteran appears genuinely afflicted by years of service and internally agonizing over events in his past. Always standing stiffly upright and tense is ultimately a guise hiding the remorse that visibly weighs him down. 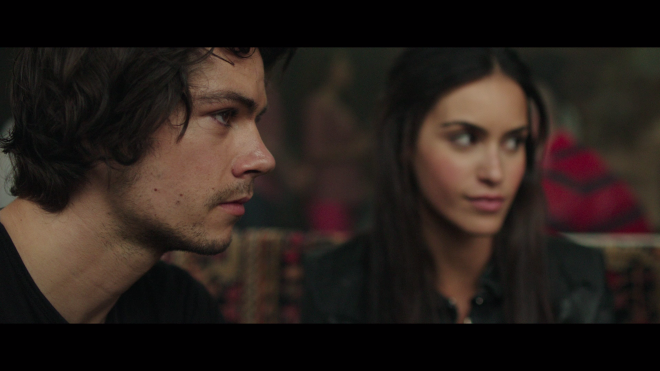 Part of the problem in this adaptation of Flynn's book series, the first of a planned action franchise centered around CIA counter-terrorism operative Mitch Rapp, is audiences having to wait so long before finally encountering the only likeable personality. And this is in spite of him being a crusty, crochety curmudgeon. Opposite Keaton is the far less interesting Dylan O'Brien, whose performance as Rapp is as satisfying as nails to a chalkboard. Not sure if it's intentional or not, but the Maze Runner star plays the vengeance-obsessed young recruit as an annoying, impudent little brat in need of a spanking. It's understandable Rapp is hauling a massive chip on his shoulder, carrying the pain of losing a loved one to a terrorist attack, but why spend tax-payer money to further train him becoming an even more aggravating, unruly holy terror, now with a special skill set and a license to kill. And his foil is the equally insipid and banal Taylor Kitsch, nicknamed the "Ghost" until a predictable twist smacks the name a little too on the nose. The two actors look so much alike, I'm almost tempted to think it a deliberate device fueling Keaton's old-man grumpiness.

However, that would be giving the filmmakers and the end result a little more credit than it really deserves. Ultimately, American Assassin boils down an agonizingly mindless actioner with hardly the thrills and frills to even suggest a watch out of simple curiosity or for Keaton's excellent performance. The plot largely feels like a patchwork of other espionage thrillers, down to the fight choreography and action sequences seeming incredibly familiar — a washed-down version of the Bourne series while hitting the snooze button just as things are about to get real. The movie imagines itself as some sort of sleuth procedural feigning a clever criticism of U.S. international policy, but it's an episodic debacle better suited for television. Perhaps, this is not at all surprising coming director Michael Cuesta (Kill the Messenger, Roadie), who does better with the drama than the action. O'Brien's Rapp fails to really ever do any smart detective work, accidentally stumbling from one clue to the next purely out of happenstance and because the plot deems it so. Brooding, angry and just plain lucky doesn't make for a good, likeable or even bankable character to kick off a franchise. This spy thriller was already retired even before it got a chance to hunt down stereotypical baddies.

Lionsgate Home Entertainment brings American Assassin to 4K Ultra HD Blu-ray as a two-disc combo pack with a flyer for a Digital HD Copy, which can be redeemed via movieredeem.com or through VUDU but only available in HD SDR and HDX. The triple-layered UHD100 disc sits comfortably opposite a Region A locked, BD50 disc inside a black, eco-vortex case with a glossy slipcover. At startup, the disc goes straight to a static menu screen with full-motion clips and music playing in the background. 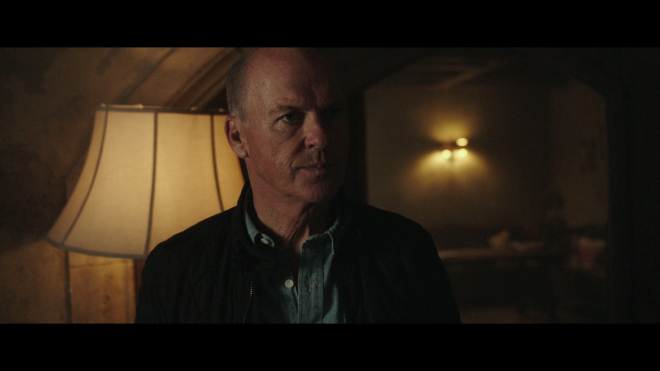 The action thriller takes aim at Ultra HD Blu-ray but sadly misses from hitting a perfect bullseye. Nevertheless, the fight against terrorism comes equipped with an outstanding HEVC H.265 encode in Dolby Vision HDR, an excellent step-up over its somewhat problematic Blu-ray counterpart. Shot on the Arri Alexa camera system, capable of 3.4K resolution but later mastered in a 2K digital intermediate, the freshly-minted transfer offers a welcomed uptick in overall definition, displaying better clarity of the background information. The upconvert shows plenty of distinct lines in the buildings and streets of Istanbul and Rome, revealing the separate cobblestones in the tight city streets and the fine stitching in the clothing. Facial complexions, especially during close-ups, are pretty stunning, exposing every wrinkle and blemish in the faces while short stumble on the men is razor-sharp. However, similar to the BD, the picture can also be quite soft by comparison on several occasions, most noticeably during conversations taking place indoors. And there a couple very minor instances of aliasing along the sharpest edges, barely noticeable but there nonetheless.

The better, and most definitely appreciated improvements are the brightness levels, delivering far richer and inker blacks with excellent gradational differences between the various shades and slightly finer detailing in the darkest portions of the frame. However, while the 2.40:1 image now shows a bit more depth and dimensionality, shadows during poorly-lit interiors remain rather murky and drab-looking, which is somewhat disappointing and is also true of its HDR10 equivalent. Overall contrast is significantly brighter and more dynamic in either version, which is a significant upgrade over its grimier, more somber-looking HD SDR counterpart. Here, the picture displays crisp, radiant whites throughout with exceptional visibility in the distance of several extreme wide shots. Specular highlights also provide a better clarity in the brightest sections though a bit of blooming remains, washing out some of the sharpest details in a few scenes.

Between the HDR10 and Dolby Vision, the latter definitely wins, which arguably is to be expected. And the area where the DV prevails is the very noticeable wider color gamut, providing the stylized cinematography with greater warmth and a more vibrant array of colors. As mentioned in the Blu-ray review, the palette places more emphasis on natural earth tones, particularly browns and yellows, giving the afternoon scenes in Rome and Istanbul an interesting golden and amber glow. Flesh tones are remarkably more lifelike and revealing with light rosiness around the cheeks and showing a light tan on the faces of certain actors that feels accurate to the climate of the region traveled. Primaries also benefit significantly, most noticeably in the reds of certain clothing items or the taillights of cars while the surrounding foliage comes with sumptuous, lively greens, and the sky glows with a natural, picturesque blue.

As dull as the movie may be, Dolby Vision is the proper and best way to watch American Assassin. 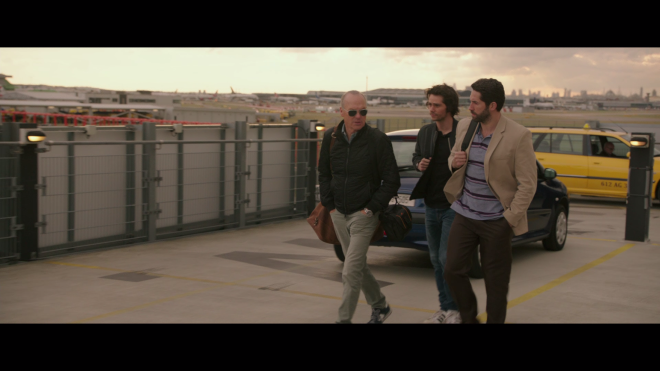 On the audio frontlines, the super-secret special ops run into action armed with the same excellent Dolby Atmos soundtrack though it sadly leaves much to be desired during the most explosive set pieces. To be fair, the design feels continuously active with a variety of noises employing the sides and rears. City scenes fill the room with the hustle and bustle of street traffic and the random chatter of people walking around. However, the ceiling channels have little going on except for the occasional echoing effect from our heroes chasing criminals through their underground lair or a helicopter flying above the listening area. And to the codec's credit, these moments feel natural and welcomed, but the overheads are generally silent.

The front soundstage does most of the grunt work as background activity flawlessly moves across the screen with convincing off-screen effects and excellent channel balance. The mid-range is quite dynamic and extensive with outstanding fidelity and clarity during the loudest, ear-piercing moments and in Steven Price's musical score. Vocals are precise and never drowned out by the action, giving priority to the dialogue and the many emotionally heated conversations. A palpable and forceful low-end provides the gunfire and explosions some serious oomph and dimensionality with one notable moment about halfway into the movie where the bass digs into the ultra-low depths, sending a pulsating tremble across the room. Alamo Drafthouse Q&A (HD, 26 min): An interview discussion on the production with stars Dylan O'Brien and Taylor Kitsch recorded after a special screening.

Transfer of Power (HD, 14 min): Kitsch returns with costar Michael Keaton to chat about the turbulent relationship and history of their respective characters.

Weaponized (HD, 12 min): Closer look at the fight & action choreography and the extensive training actors went through, featuring a few words with O'Brien and Keaton.

Finding Mitch Rapp (HD, 10 min): O'Brien talks about the character from the book series and his history.

In the Field (HD, 9 min): Discussion on the filming locations showing the amount of prep work done. 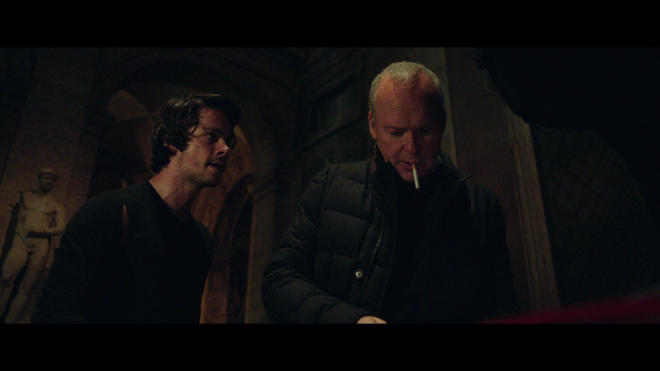 American Assassin is a misguided and mind-numbingly mediocre espionage thriller that practically runs through a checklist of clichéd plot devices while also feeling familiar to every movie of the subgenre. Amazingly, Michael Keaton delivers an exceptional performance that stands alone against his two costars, a frustratingly annoying Dylan O'Brien, who is meant to be the story's hero, and a terribly drab Taylor Kitsch. It's not even worth watching simply out of curiosity or for Keaton's performance. Though a couple minor flaws keep it from scoring higher, the Ultra HD takes aim and comes close to hitting its mark with a gorgeous 4K presentation in Dolby Vision HDR, offering a marked improvement over the Blu-ray, and featuring the same excellent Dolby Atmos soundtrack. In the end, the overall UHD package is a risky bet while the few fans out there will be more than happy, so give it a rent first before committing with a purchase.

Sale Price 4.86
List Price 13.42
Buy Now
3rd Party 4.86
In Stock.
See what people are saying about this story or others
See Comments in Forum
Previous Next
Pre-Orders
Tomorrow's latest releases