The Autobots learn of a Cybertronian spacecraft hidden on the moon, and race against the Decepticons to reach it and to learn its secrets.

For this movie lover, the more fascinating aspect of Michael Bay's Transformers movies is the staunchly devoted fandom surrounding it. The franchise's most ardently loyal followers prescribe to a type of adoration that readily disregards each movie's deficiencies, gladly forgives the wealth of blunders in each plot and willfully turns a blind eye to the blatant flaws within the filmmaking. And with each entry, the series feels as though steadily growing dumber, more juvenile and incomprehensible while at the same time, moving further and further away from the original mythology of the Hasbro toy line it has been very loosely based on. The most convenient, and also widely accepted, excuse for their popularity and continued box-office success is that they are not meant to be analyzed but simply enjoyed as mindless popcorn entertainment. And if this is the case, then what a sad reflection of our contemporary culture when outrageously fantastic visuals, which are incoherently edited together and ultimately shallow, is enough to arouse the public's imagination and satisfy their needs for escapism.

Nevertheless, by the time we come to the ridiculously titled Dark of the Moon, moviegoers know full well what they're walking into. It is again much of the same, urged by another absurdly preposterous plot that essentially brands the events of the movies that preceded it as pointless. By this third installment, a permanently visible line has been drawn, not so much between the humans and the giant sentient robots supposedly sworn to protect those same humans from annihilation, but the line is more between the fans defending these movies as modern action classics and those who see them as an insipid stain in the history of cinema. And here, Bay absolutely flaunts his unmistakable view of women as either little more than objects of competition — as Patrick Dempsey's Dylan Gould describes a show car, the camera practically ogles Rosie Huntington-Whiteley and Shia LaBeouf's Sam grows impatiently jealous — or as shrill-voiced spouses that complain men into submission, as in Sam's mother played by Julie White. And for me, this is just one of several aspects of a heavily flawed adaptation to a dearly beloved toy and cartoon franchise.

For a more in-depth and positive take on the movie, you can read the review of the Blu-ray SDR HERE. 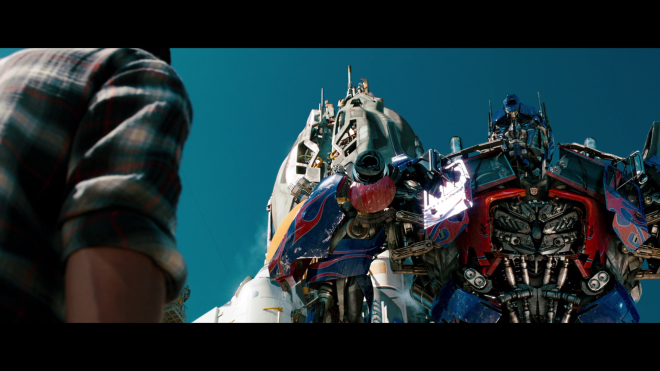 Paramount Home Entertainment brings Transformers: Dark of the Moon to 4K Ultra HD Blu-ray as a three-disc combo pack with an UltraViolet Digital Copy, which can be redeemed via ParamountMovies.com or VUDU, giving users access to the 1080p HDX version only. Inside the black, eco-vortex case with a shiny, lightly-embossed slipcover, the triple-layered UHD100 disc sits comfortably on one side of a center spindle while a Region Free, BD50 copy is on the opposing side. The third is another BD50 disc containing the same supplements. At startup, viewers are taken directly to a menu screen with the usual selection along the bottom, full-motion clips and music playing in the background.

Ultra HD shines a light on the dark side of the moon with a beautiful, very cinematic HEVC H.265 encode in Dolby Vision HDR, offering fans a great upgrade over the Blu-ray. The picture quality doesn't deliver a massively earth-shattering difference, but it's substantial enough for ardently loyal fans to gush over, making it the best-looking UHD of the original trilogy.

As mentioned in my review of the 3D version, Michael Bay opted to shoot with a combination of traditional 35mm, 3D digital systems and HD digital cameras, some of which are capable of up 4.5K resolution, all of which was later mastered in a 2K digital intermediate. And like with its predecessors, the jump to 4K may not be leaps and bounds better, but the overall results are pretty awesome, delivering excellent visibility and definition of objects in the far distance. Pores and minor facial blemishes are exposed on nearly every actor while small rust stains and scratches on the paint signifying battle wounds are very distinct on each transforming robot. Combat sequences are beautifully detailed and extraordinary as the tiniest piece of debris flying through the air retains exceptional clarity. However, it does come with its share of softer, less satisfying moments, likely related to the stylized photography, and there are some very mild, mostly negligible instances of shimmering along the sharpest edges.

But most of that is easy to overlook when appreciating the improved contrast levels, providing the 2160p video with an energetic pop. Whether it's the fluffy clouds slowly moving across a big blue sky or some of the random articles of clothing, whites are pitch-perfect and in pristine shape. Even after a few of the human characters have survived what looked like horrible battle ordeals, their clothing remains dynamic and brilliant. Specular highlights, on the other hand, don't show much improvement though the metallic edges of the various vehicles, weapons and robot bodies come with a realistic sparkle and gleam. The issue, however, is the loss of detailing within the hottest, brightest spots, such as the headlights and the glow of explosions, which seems inherent to the cinematography of all the films. Thankfully, brightness levels are not affected by the stylized look, providing the 2.40:1 image with a lovely cinematic appeal. The upconverted transfer displays inky rich, silky smooth blacks with exceptional gradational differences and detailing within the most stygian shadows and darkest portions of the frame.

And once again, where the 4K presentation really shines and should please owners with the upgrade is the wider color gamut, displaying richer, more animated saturation levels that dazzle the screen with lots of energy. The overall palette, of course, places more emphasis on somewhat natural earth tones thanks to Amir Mokri's unattractive orange-teal photography, and interestingly, the picture now comes with a more noticeable golden amber sheen while the orangey-sunburned faces of the cast are more apparent. The yellow walls of Sam's office job and Bumblebee are resplendent, and Bay's signature sunset scenes with a beautiful fiery orange that fades into lighter hints of magenta and darker blues. One of the more eye-catching moments is David's 1939 Delahaye 165 looking more a glossy red wine than the dark brownish rust color seen in HD. Greens are teeming with life and intense energy while the blues in lights, the eyes of Autobots and the sky are sumptuous and electrifying. Sadly, this video appears to suffer from the same issue seen in Revenge of the Fallen where reds are, for the most part, radiant and gorgeous but can also seem over saturated with a tinge of blooming. And as before, this is most problematic in the CGI fires and explosions where it looks very much digital, artificial and near cartoonish with some mild posterization around the edges.

Aside from that, the last in the original trilogy looks beautiful in Dolby Vision.

The third entry in the rock'em, sock'em robot carnage crash lands on UHD with a sensational, demo-worthy Dolby Atmos soundtrack that isn't so much an upgrade over its TrueHD counterpart as it simply enhances the original sound design.

As I mentioned in my previous review, it's almost as if Bay wanted to make this title louder and even insanely busier than the first two, and with the added heights to complement those existing elements, this object-based track delivers an exhilarating aural experience in nearly every battle scene. Random objects and debris during battles pan into the surrounds or move towards the screen with flawless effort as if actually flying across the room. And some of those effects scatter overhead with incredible effectiveness and exceptional directionality. Listeners are immersed with the sounds of combat — yelling, screaming and buildings crumbling all around and from above as though actually happening in the room, creating a fully enveloping hemispheric sound space. The action continuously augments the visuals with a terrifying intensity that feels immense and thrilling.

Like before, Steve Jablonsky's score takes full advantage of the audio format, nicely bleeding into the front heights and across the screen with superb balance, generating a highly-engaging half-dome wall of sound. The rest of the soundstage exhibits impressive fluid movement and channel balance, as a variety of atmospherics convincingly extend into the off-screen space. Not only are voices and dialogue intelligible during the movie's loudest segments, but they move across the entire screen, from left to right, without the slightest hiccup or imperfection. A highly-detailed mid-range that sharply and evenly spreads across the front speakers allows for every clash, ping and grate of metal upon metal to be heard and echo all around. Differentiation between the highs and mids are very precise and crystal-clear, making for a very wide and spacious image that fills and enlivens the room with hair-raising action. The low-end adds to the immersive sense of presence with an authoritative force and breathtaking weight, occasionally digging into the lower frequencies with impressive, room-shaking intensity.

Above and Beyond (HD, 111 min): Broken into five separate chapters that can be watched sequentially, this sprawling documentary exhaustively covers all the major aspects of the production.

Rising from the Fallen

Battle in the Heartland

Attack of the Birdmen

Shadow of the Sentinel

Uncharted Territory: NASA's Future Then and Now (HD, 26 min): A brief discussion on the history of the space program, its evolution and the possibilities in store for future astronauts.

The Art of Cybertron (HD): A still gallery broken into five separate pieces containing various concept art on the Tranformers and their home planet.

The Dark of the Moon Archive (HD, 19 min): Another five-piece segment showing various video clips and interviews on the benefit of 3D filmmaking, the movie's premiere, the base-jump sequence and the sound design.

The Matrix of Marketing (HD): Along with two theatrical previews for the movie, fans can enjoy a still gallery collection of posters and promo material.

Despite rectifying horrible mistakes made in the sequel by being more entertaining, the third and final installment in the Transformers franchise remains a brash, dumb spectacle of big, clunky summer-blockbuster nonsense. Many of the same personalities return along with a couple of new surprises, but the whole thing finishes in traditional Michael Bay style with a nearly hour-long incoherent, plotless action sequence that somehow manages to excite a little.

The annihilation of the human species finds a home on Ultra HD with an excellent, beautiful-looking 4K Dolby Vision presentation that delivers the best PQ of the original trilogy. The second sequel stutters its way to UHD with a new Dolby Atmos soundtrack that fares much better with a few demo-worthy moments. With the same set of supplements as the special edition 3D Blu-ray, the overall package is recommended for fans while those hungering for more Dolby Vision HDR goodness might be willing to bite the bullet.

Sale Price 21.49
List Price 25.99
Buy Now
3rd Party 17.25
In Stock.
See what people are saying about this story or others
See Comments in Forum
Previous Next
Pre-Orders
Tomorrow's latest releases