Doug Liman's American Made is the outrageously insane, unbelievable true story of a commercial airline pilot flying reconnaissance missions in South America for the CIA. That pilot, Barry Seal (Tom Cruise), later expands his interests into the drug trafficking business for the notorious Medellín Cartel and finished his steep rise to prosperity by becoming a DEA informant. For those unfamiliar with Seal's short-lived success and mediocre notoriety, it is the infamous story of a former Army soldier who basically dared to dream too big rather than settling into the traditional nuclear family. In real life, his smuggling activities, stretching over ten years from the mid-1970s to the mid-1980s, single-handedly impacted the war on drugs effort and ushered in the cocaine epidemic of that era, leading to the well-known "Just Say No" slogan that remains popular today. In this adaptation inspired by various sources, the filmmakers take a great deal of creative license with the much-less glamorous reality, stretching and distorting the facts not only for entertainment purposes but also in an attempt to dig at a deeper truth within modernity's notions of success.

In this fictionalized depiction of events, some of which were completely made-up by Seal while others are sizable exaggerations of the details, Seal is a bit of a smug daredevil dissatisfied with his career chartering passenger planes for TWA. An amusing montage of him bidding adieu to commuters shows him reciting a scripted farewell that feels forced and painfully hollow while managing to sport a fake, toothy smile. We're never lead to believe he hates his life, but it's clear the routine has drained, if not killed, his passion for flying, coming home to his adoringly affectionate wife, Lucy (Sarah Wright), only to immediately pass out in bed. His prospects for excitement suddenly take a turn for the better when the mysterious CIA agent Monty Shafer (Domhnall Gleeson) contacts him with an unexpected business opportunity. With his smugness and ego also growing with the size of this venture, no one better could have done this character justice than Cruise. Although he doesn't carry the sort of box-office weight he once did, the A-list actor remains at the top of his game with a natural talent for bringing a sense of humanity and fragility to these sorts of personalities. 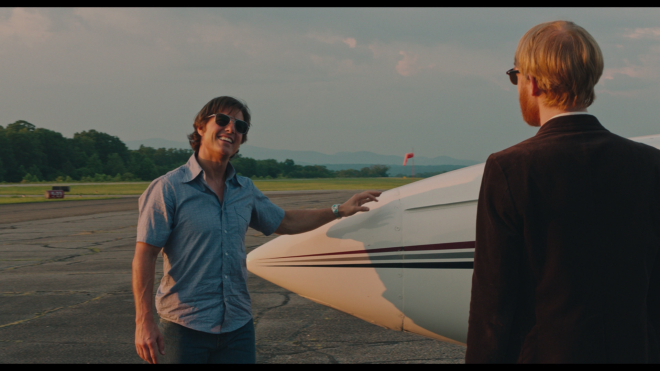 Told with a documentary feel, as though impulsively capturing everything in the moment, Liman and cinematographer César Charlone (City of God, The Constant Gardener) take a handheld approach to the material, allowing Cruise the freedom to do what he does best. He's proven himself a charismatic talent for making self-absorbed, vainglorious characters into believable people while also charming the camera, knowing when to be eccentric versus emotional according to that character's story development. Or better yet, it gives Seal the opportunity to hijack the camera and bathe in the attention, to bask in his own sense of accomplishment, misguided and deluded as his perception of success truly is. And that is precisely why this film works and is vastly more entertaining than it has any right to be. Confessing all his activities onto VHS tapes, both as a video diary and as evidence, Seal makes no apologies, never asks for forgiveness and doesn't offer to make amends for his wrongdoings. In spite of all his blatantly obvious mistakes, he remains unfazed and undaunted by the experience in front of the camera, though the filmmakers imagine otherwise.

Ultimately, American Made is, at heart, an all-too-familiar story about the rise and downfall of a life in the era of excess, another period in the 20th Century when overindulgence was the norm and the degree of one's success was weighed by material things and overconsumption. And as the title seems to suggest, have times really changed going into the 21st Century where money is, once again, God and wealth equated to happiness. Seal is incapable of seeing through his own lies and warped sense of prosperity while a loving family stands at his side. His story is a morality tale of greed superseding wisdom and sensible decision-making, and as such, we know in advance it will not end well. Perhaps, this also makes it a very conventional, if not also predictably clichéd, a fable about money only bringing temporary happiness, yet watch and gawk in fascination like a car wreck on the side of the road. But for Liman and writer Gary Spinelli, the true-life account provides a wildly entertaining conceit on the ever-elusive "American Dream," of coming too close to the proverbial sun and being terribly burned by it.

Universal Studios Home Entertainment brings American Made to 4K Ultra HD Blu-ray as a two-disc combo pack with a flyer for an UltraViolet Digital Copy, which can be redeemed via UPHE.com, Movies Anywhere or VUDU for the SD and HD SDR versions. The dual-layered UHD66 disc sits comfortably opposite a Region Free, BD50 disc inside a black, eco-cutout case with a glossy, embossed slipcover. At startup, the disc goes straight to an interactive menu screen with full-motion clips and music playing in the background.

As though telling the story through rose-tinted glasses with a pseudo-documentary feel, the intentionally creative choice occasionally makes whites seem overblown and bleeding, but it's actually part of the effect giving the story a dreamy, fantasized appeal. Beneath it all, contrast remains pitch-perfect and squeaky-clean with a crisp, more radiant glow in the sun's rays through windows, Seal's shiny new airplanes and in several articles of clothing. There isn't a great deal by way of specular highlights, the brightest spots show remarkable improvement nonetheless, revealing more detailing within those hot areas. At the same time, black levels are richer and truer with better variation between various shades. However, it's not always consistent with a few moments still looking murky and flat, but details within the darkest corners of the 1.85:1 image are revealing while still maintaining strong dimensionality.

As with its HD SDR counterpart, colors are greatly affected by the deliberate look, skewing the entire palette to a lustrous, pearlescent glow that further magnifies the story's delusional reverie. Although primaries, on the whole, are greatly saturated, they are nonetheless sumptuous and intensely flamboyant with reds, in particular, giving cars, clothes, and blood a strikingly dramatic flair. The South American jungle is a deeply rich and lively green while the Seal kitchen is painted in a nauseous avocado shade, and the sky glows with spirited, true-to-life blue. Most of the palette, however, emphasizes earthy yellows to give the scenes in South America both a dirty, sleazy feel and a sense of the hotter climate. The 2160p video also displays a wide array of vivid neon pastels appropriate to the time period while providing exterior shots with a picturesque yet antiquated beauty. Flesh tones appear healthy and accurately rendered with lifelike complexions that reveal the smallest blemish, pore, and wrinkle.

Speaking of which, the flight into UHD doesn't offer a significant jump in terms of resolution from the HD version with several moments looking considerably softer than the best scenes. Granted, viewers will definitely note a welcomed uptick, but it's not a major difference, which is to be expected when sourced from a 2K digital intermediate. Nevertheless, tucked away under all that shine and gloss is pristine, primo definition and resolution. Individual hairs and the threading in clothing is razor sharp, and every object and piece of furniture in Barry's extravagant house is crystal clear. From a distance, the leaves swaying atop trees is plainly visible, and viewers can practically count each rivet of the large military planes. Some of the best moments are the extreme wide aerial shots over the South American jungle. In the end, the 4K presentation is a lovely and often marvelous faithful representation of the filmmakers' creative intentions.

The 4K Ultra HD features the same awesomely gratifying DTS:X soundtrack heard on its Blu-ray counterpart. The surrounds are continuously kept busy with a variety of atmospherics while many of those effects discretely pan across the overheads, creating a satisfyingly-immersive hemispheric soundfield. Meanwhile the soundstage feels expansive with tons of bustling background activity and a crystal-clear mid-range while the low-end energizes the room with a forcefully persuasive and impressively vigorous bass.

Doug Liman's American Made is the outrageously insane, unbelievable true story of commercial airline pilot Barry Seal flying reconnaissance missions in South America for the CIA. With another excellent performance from Tom Cruise in the lead, the crime bio-drama is vastly more entertaining than it has any right to be, allowing Cruise's portrayal of the character the opportunity to bathe in the attention and bask in his own sense of accomplishment, misguided and deluded as his perception of success truly is.

The ever-elusive "American Dream" lands on Ultra HD with a heavily-stylized but fantastically gorgeous 4K presentation that's faithful the creative intentions of the filmmakers and a highly-satisfying DTS:X soundtrack tags along for the ride with several demo-worthy moments. Although supplements are pretty light and somewhat forgettable, the overall package is recommended for fans and HDR enthusiasts.