In mother!, Jennifer Lawrence plays an unnamed woman waking one morning to find her husband (Javier Bardem) not sleeping by her side. As the day progresses into the late evening, a stranger (Ed Harris) shows up at the door of their newly-renovated house, soon followed by the man's wife (Michelle Pfeiffer) the next morning. We learn the nameless woman restored the house herself, essentially remodeling it from the ashes of another to the delight and satisfaction of her husband. She does this while suffering an unexplained abdominal pain triggered by stress and anxiety, requiring a mysterious yellow powder swirling in plain water. In fact, when we first meet her, she's plastering the walls in a dull, mustard yellow. Lawrence is the anonymous woman of Charlotte Perkins Gilman's "The Yellow Wallpaper," the everyday woman imprisoned, condemned and driven mad by an oppressive patriarchal system that doesn't see her as an equal partner or her labor. Like that narrator, events unfold from her perspective, expressing apprehension with a timid, reluctant and uncertain voice bowing to her husband's needs, always giving her everything, including her heart.

While also perhaps suddenly realizing none of the character's names are ever mentioned, this anonymity within the plot extends into a commentary on faith, religious dogma and even the entire history of humanity's abuse of the planet. Lawrence is also the goddess Gaia building a secluded paradise for her love, but Bardem welcomes an unexpected, uninvited couple (Harris and Pfeiffer): one has a bruised rib while the other is a curious temptress who breaks Bardem's forbidden object. But before Mother Earth can cast these disappointing guests from her home, the couple's two sons (Brian and Domhnall Gleeson) barge into the house, introducing jealousy, greed, and murder, which is the moment her tireless work begins to descend into chaos. With time, He ignores her and her concerns about their house rotting away. He's too enamored by and selfishly absorbed in the cultish worship and reverence of His written work. And it's this very admiration growing into idolization for Him that permits his followers to despoil while also neglecting and undervaluing her. Her wrath then turns into an unstoppable, all-consuming fire ignited by the oil at the house's foundation. 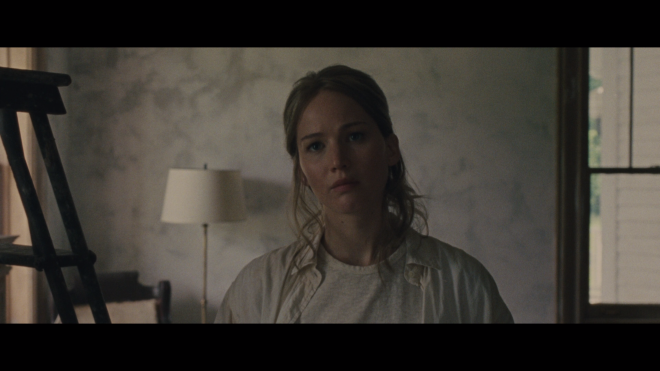 This balancing act between creation and destruction also plays an intrinsic, profoundly important role in the nature of art. Bardem is the stereotypical artist feeling defeated by his writer's block while simultaneously frustrated by his inherent need to write. Lawrence embodies any one of the nine Muses, if not all them. And as the goddess of inspiration, she builds and furnishes a home for Bardem, loitering about until something finally sparks. Unfortunately, she must endure the random characters wishing to occupy his imagination or the seemingly aimless, haphazard story of a family in grieving because from sorrow and melancholy breeds art. Her purpose in his life is to simply give birth to his creation, to instill him with the poetic words that will move people, to motivate and rouse them into action. As the expression goes, the pen is mightier than the sword, and she becomes witness to the power of his words provoking, at first, stardom slowly growing into a cult of celebrity before evolving into a cult of personality and inflaming a people into revolution. But once the art goes through its natural course of cultural prestige, the cycle of the Muse must commence anew.

Few filmmakers with a relatively short catalog of features have consistently amazed and impressed me over the years, managing to leave me emotionally overwhelmed while also fascinating me with disturbingly provocative and ambitiously challenging stories. Darren Aronofsky is one of those filmmakers, along with Denis Villeneuve, Paul Thomas Anderson, and Alfonso Cuarón. And in mother!, this is arguably Aronofsky's most ambitious and intriguing project yet, rapidly becoming the most divisive film of the year — outside of the more highly-vocal and public uproar over The Last Jedi, of course. Using a familiar horror template that spirals into a surreal, phantasmagoric nightmare, Aronofsky bombards the senses and the imagination with layers upon layers of meaning, making any possible interpretation valid, which perhaps explains viewers' frustration with this magnificent arthouse piece. Either by design or intuitively, he traces humanity's evolution of the divine from Platonism and Gnosticism to Neoplatonism, but as in the idea of the artist, his creation has escaped him, run away from its original intention, and the audience can infer whatever meaning they wish.

Paramount Home Entertainment brings mother! to 4K Ultra HD Blu-ray as a two-disc combo pack with an UltraViolet Digital Copy code, which can be redeemed via ParamountMovies.com or VUDU, giving users access to the 1080p HDX version only. Inside the black, eco-vortex case with a glossy slipcover, the dual-layered UHD66 disc sits comfortably opposite a Region Free, BD50 copy. At startup, viewers are taken directly to a static screen with the usual selection along the bottom and music playing in the background.

Aronofsky's psychological horror fable breathes life on 4K Ultra HD with a great-looking if also arguably underwhelming HEVC H.265 encode in Dolby Vision HDR. By this, I mean mother! won't provide the sort of wow factor some have to come expect of the format but it's faithful to the creative intentions of the filmmakers.

The heavily stylized photography of Matthew Libatique was deliberately done to resonate with and mirror the plot's themes, as well as an attempt to echo classic Medieval and Early Modern religious art, hopefully leaving a lasting impression. Shot on a combination of Super16 film stock, traditional 35mm and the Red Epic Dragon camera system, the freshly-minted transfer falls on the softer side of things with a few unexpectedly blurry sequences, but, surprisingly, overall definition and resolution is stronger with an appreciably notable uptick in detailing, especially in the clothing and faces of the cast. A visibly and consistent thick grain structure showers the picture, giving it an aged and attractively textured film-like appeal. As the movie continues, sharpness and clarity improve while the grain becomes slightly less visible, a deliberate artistic choice that goes with the story's developments and reflects on-screen events.

Presented in a 2.40:1 aspect ratio, the 4K presentation also displays a somewhat restrained contrast, making everything feels rather calm, idyllic and peacefully dreamlike. However, it is a marked improvement with significantly brighter and cleaner whites that'll occasionally have viewers squinting at the screen and making some clothing items appear immaculate. As the story progresses, contrast slowly improves as the heroine's paradise home deteriorates into a surreal nightmare. There isn't much in terms of specular highlights, but the glimmer in a person's eye or the light shining on their face is sharper and tighter with a bit more clarity. Brightness levels are lightly affected by the stylized look, delivering some rather lackluster, slightly murky blacks in the first half, making everything pretty flat. In the second half, however, shadows improve and are better rendered, providing the image with an appreciable three-dimensionality quality and outstanding detailing within the darkest corner, but blacks remain a tad on the lower end of the grayscale.

What ultimately makes this UHD the best and preferred way to watch the bizarrely surreal film is really thanks to Dolby Vision HDR. Granted, the overall palette has also been deliberately toned-down with more emphasis on softer pastel hues and natural earth tones, but there is notably marked improvement in these areas along with primaries looking fuller and a tad richer. The red in blood is a deeper crimson shade, the green in surrounding foliage more energetic, and the blue in the sky comes with a more dreamy, optimistic shade. The screen is awash in a soft yellow-amber tint for the first half, but it grows in intensity as the character's ordeal increases and after coincidentally flushing her powder medication. Flesh tones come with a light reddish tint, making everyone appear more natural with lifelike complexions and textures. The best, standout moment for comparing the 4K Dolby Vision presentation to the Blu-ray is the woman's vision when reading her husband's poem: the sky is overwhelmed with a blindingly yellowish white light in the corner and a brilliantly vivid blue atmosphere while the clouds glow with cotton-candy pinks and dark velvety purples.

Bringing the phantasmagoric delusions to all their purgatory glory is a fantastically grotesque Dolby Atmos soundtrack heard on the Blu-ray. Similar to the video, the track may not be the sort for demoing the object-based format, but it was conceived with a creatively artistic intention the splendidly complements the visuals. Aronofsky and film composer Jóhann Jóhannsson decided on a more experimental, minimal approach to the material, one that accompanies and enhances Craig Henighan's ingenious sound design. Focused primarily on generating an air of mystery and strangeness in the first half, the soundscape is layered with the footsteps of people walking upstairs, and the house creepily groans at the most unanticipated moments. The faint, subtle tap of a zill is heard in random parts of the house and lightly echoing all around, and the local wildlife occasionally chirps in the distance. As things progress for the worse, these ambient effects intensify and increase, becoming louder as the chants, screams, and horrors of war travel in every direction.

Being a character-driven film, most of the attention is obviously placed on the dialogue and the often eerie conversations, so no matter the chaos erupting around our heroine, vocals remain distinct, precise and always audible. The rest of the soundstage feels wide and spacious much like the house, busy with lots of background activity, exhibiting superb detail clarity and separation during the loudest, ear-piercing moments without displaying the slightest hint of distortion. As the story slowly builds towards pandemonium, the screen seems to gradually widen with a variety of effects and voices convincingly traveling off-screen and into the front heights, creating a highly engaging half-dome wall of sound. For a horror drama, the mix comes with a surprisingly commanding, wall-rattling low-end that sends a full-bodied rumble across the room and sometimes plummets into the lower depths to intensify the suspense.

The Downward Spiral (HD, 30 min): EPK-like piece with cast & crew interviews providing an overview of the production, the creative process and plot with lots of BTS footage interspersed throughout.

Aside from the more vocal uproar over the year's biggest blockbuster, Darren Aronofsky's mother! is perhaps the most divisive film of the year, enduring a great deal of scorned outrage, vehement objection or simply frustrated confusion over the director's intentions. Granted, the film is ultimately a 120-minute arthouse piece bombarding the senses with a seemingly random assortment of nightmarish visuals and phantasmagoric hallucinations leaving it to the audience to construct meaning. But in either case, there is not denying the film provokes an emotionally passionate reaction and deserving of thoughtful analysis.

The 4K Ultra HD Blu-ray arrives with a great-looking Dolby Vision HDR presentation that's faithful to the filmmakers' stylized photography while also displaying several marked improvements over its HD SDR counterpart, and the Dolby Atmos soundtrack is a beautifully designed aural experience that splendidly complements the visuals. Sadly, the supplements are terribly lacking, if also disappointing, but the overall package nonetheless is recommended for Aronofsky fans, the film and those hungry for more Dolby Vision goodness.

Sale Price 17.5
List Price 25.99
Buy Now
3rd Party 11.46
In Stock.
See what people are saying about this story or others
See Comments in Forum
Previous Next
Pre-Orders
Tomorrow's latest releases