In the night skies near his Muncie, Indiana, home, power repairman Roy Neary experiences something out of this world. His close encounter sets into action an amazing chain of events that leads to contact with benevolent aliens and their Mothership.

The year 1977 marked a turning point for science fiction in US cinema. Although the genre had long been dominated by C-grade schlock, the arrival of two blockbuster films changed all that -- George Lucas' Star Wars and Steven Spielberg's Close Encounters of the Third Kind.

But while Lucas' nostalgic space opera was certainly the bigger hit at the time (and went on to become the most influential cinematic phenomenon of the late twentieth century), today Spielberg's more benevolent tale of first contact with extra-terrestrials is widely perceived as the superior film of the two. Indeed, thirty years later, while Lucas' original trilogy has suffered something of a backlash due to its poorly received prequels, Close Encounters is now regarded as a genuine epic as influential, awe-inspiring and revolutionary as Metropolis, 2001: A Space Odyssey and Blade Runner.

At the time of its release, Spielberg's masterpiece flew in the face of all that audiences expected out of mainstream science fiction. It married a Disney-like sense of enchantment and idealism with a metaphysical exploration of faith and religion. It was the first new-age movie, re-imagining spiritual transcendence as extra-terrestrial contact. The quintessential Spielberg protagonist, blue-collar suburbanite Roy Neary (Richard Dreyfuss) is an ordinary man who finds himselfr in extraordinary circumstances. Like many classic religious figures, he becomes a pariah and an outcast, alienated from his family, friends and co-workers, finding redemption only after connecting with fellow "disciples," all of whom share a common vision and spiritual quest.

The legendary film critic Pauline Kael wrote of Close Encounters, "this isn't nuts-and-bolts, Popular Mechanics science fiction, it is beatific technology -- machines from outer space deified." When the film climaxes at Devil's Tower as first contact is made (in one of the film's many visually-breathtaking sequences), our hero sacrifices his life and his earthy responsibilities -- man, husband, father -- to ascend to a new level of consciousness. This unconventional ending has, over the years, caused much consternation, perhaps most of all from Spielberg himself, who has since re-evaluated the film's place in his body of work. ("It's the film that dates me the most," he says on this Blu-ray's supplements.) But even Spielberg's own ambivalence can do little to diminish the film's status as one of the most intelligent, ornate and visionary science fiction epics ever made. 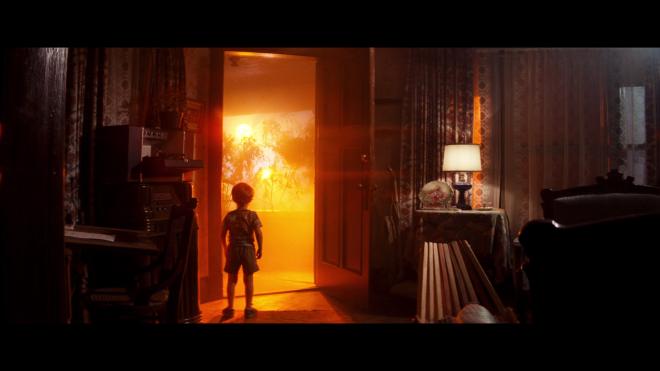 Of course, as has become common with so many sci-fi landmarks (including Star Wars and Blade Runner), there are so many versions of Close Encounters floating around that it's hard to know which one to pick if you've never been introduced to the film. So here's a quick overview. Close Encounters opened on December 17, 1977, with a runtime of 135 minutes, and was an immediate sensation. Still, Spielberg remained dissatisfied with the final product; an accelerated post-production schedule, enforced by the studio to capitalize on the lucrative holiday box office season, led him to dub the theatrical cut a "work in progress."

Three years later, in 1980, Columbia granted Spielberg the then unheard-of opportunity to revisit his epic and craft what would become known as 'The Special Edition.' Shortened to 132 minutes, he removed entire scenes, trimmed and reshaped others, and completed several "dream shots" -- all at a cost of over $1 million. But there was a concession; Columbia forced Spielberg to shoot an extended finale taking us inside the mothership, a sequence that, while expertly executed, did not advance the narrative and that Spielberg has publicly decried in the three decades since. Despite all the changes, 'The Special Edition' eventually proved to be just another rough cut.

Finally, in 1997, Spielberg returned to his unfinished masterpiece for the third -- and presumably final -- time, creating what he now calls his definitive Director's Cut. Scenes were again added and reshaped and the extraneous "inside the mothership" climax excised. The result is easily the darkest and best version of the film (it's certainly my favorite), and with it, the book on Close Encounters at last seems to be closed.

But whichever version of the film you personally prefer, this first-ever Blu-ray version is sure to please, as it contains all three versions of the film, each remastered and accessible from the same disc via seamless branching. Spielberg's masterpiece -- in any form -- is a must-see for any sci-fi fan, so if you've never seen the film, you no longer have any excuses.

Inside a black, eco-vortex case with a glossy slipcover, two BD50 discs sit comfortably on opposing panels while a dual-layered UHD66 disc with all three versions of the film sits on a center spindle. The package comes inside an attractive hardcover box that lifts from the top and features a lenticular center that lights up when pressing a button on the right side while playing the iconic five-tone theme. Also included is a 64-page book with rare production photos titled "Visual History."

At startup, the disc goes straight to a menu screen with full-motion clips and music playing in the background.

Ten years since the last home video invasion, producers of the sci-fi epic return to Devils Tower to celebrate the groundbreaking classic's 40th Anniversary with a new full restoration of the original camera negatives. All three versions of the film were scanned and remastered at 4K resolution for this commemorative release, which also enjoyed a short, limited theatrical run as part of the celebration.

The results are astounding and simply beautiful, to say the least, making contact on Ultra HD thanks to a strong HEVC H.265 encode that surprisingly surpasses all previous home video arrivals. However, like its predecessors, the presentation is awash in a noticeable layer of film grain, which naturally looks a bit thicker in many nighttime sequences and ultra-fine thin during daylight exteriors. Thankfully, for those who appreciate it, this only provides the Spielberg classic with a lovely film-like quality that's consistent and expected given its age and past releases. Like before, due to how Vilmos Zsigmond originally shot the movie, a few scenes suffer from poor resolution and look considerably softer than others, originating from the condition of the source rather than a fault in the encode. On the whole, the transfer is significantly sharper with distinctly-defined lines in the clothing, surrounding foliage and the various computer equipment. Some of the finer details of the spaceships are more visible, and lifelike textures in the faces of the cast reveal pores, minor wrinkles and other negligible blemishes. Sadly, some of the more astute observers will notice some very mild instances of aliasing along the sharpest edges in a few areas.

The more appreciable improvements, of course, come by way of the higher dynamic range, providing the 2.40:1 image far more dimensionality than before and giving the 4K presentation a stunningly cinematic appeal, as though watching it for the first time on the silver screen. One of the better-improved areas are the brightness levels delivering richer, silkier blacks, not only during the many nighttime sequences but also in poorly-lit interiors with deep, dark shadows that don't take away from the finer details in the background. The overall picture is markedly brighter with brilliantly radiant whites in the clothing and the fluffy clouds in the sky, allowing for the tiniest fold and furrow to remain visible from a distance. The specular highlights are, at times, quite dramatic, giving faces and metallic edges a realistic shine while the brightest spots on the spaceships appear tighter and more compact, making it possible to again better make out the finer details of each ship's design. The original photography never showed a varied palette to begin with, emphasizing more natural earth tones, but primaries are nonetheless bolder and more dazzling with secondary hues, such as yellows, oranges, and browns, providing a more intense glow.

For fans of this sci-fi epic, the Spielberg classic has never looked better than it does on Ultra HD.

To celebrate forty years of close encounters, Sony has opted to make contact with the same DTS-HD MA 5.1 soundtrack enjoyed on the previous Blu-ray release but dropped the Dolby TrueHD version. With that said, Peter Bracke gave an accurate assessment of the track's quality, explaining that while the design doesn't compare to modern blockbuster, it holds up surprisingly well.

Sonically, the film itself has a bit of a split personality. The first half is mostly dialogue driven (though, as always, John Williams' classic score is its own character in the movie), while the other half is all about the otherworldly visitors. When the aliens show up, boy, does this track deliver. The scene where Roy Neary first encounters a UFO in his pick-up truck still delivers some of the most intense low bass I've ever heard on a home theater mix. Cranking up the high-res tracks, my subwoofer just about vibrated right off the floor — this scene, along with the mothership climax, is a true test of any home theater rig's mettle. Don't turn up the volume on this [high-def] edition of Close Encounters unless your speakers can handle it.

The rest of the mix is a bit more dated. There is a compressed feel to the film's dynamic range that, while not crippling, is definitely noticeable. There's never that truly expansive feel to the mix you get with a modern soundtrack. Dialogue sounds constrained, and if still understandable, it's never as distinct in the mix as I would have liked. Likewise, Williams' score is nicely spread out in the soundfield, but never quite soars in terms of fidelity. Surrounds are generally active, though again that's only usually when a UFO appears. Sounds in the rears are usually pretty easy to localize, so there is never that seamless "wall of sound" that you usually get with the best high-res audio presentations.

Nevertheless, the lossless mix comes with many satisfying moments and a welcomed wall-rattling impact.

Making of Documentary (SD, 102 min): A thorough and exhaustive documentary the covers pretty much every aspect of the production imaginable, made from cast & crew interviews, still photos and BTS footage.

Steven Spielberg: 30 Years of Close Encounters (HD, 21 min): An interview conversation with the legendary filmmaker explaining the story's genesis, his interest in the topic and his creative process.

Roy on the Job

At the Police Station

At the Gas Station

Close Encounters is still so etched in the popular consciousness that it's hard to believe that it's been [forty] years since it first hit theaters. Although the film has been released in a myriad of different versions (all presented in full on this [4K Ultra HD] Blu-ray), whichever version you personally prefer, the film remains an uplifting experience that's an absolute landmark of the science fiction genre.

Celebrating its 40th Anniversary, the classic film makes contact on Ultra HD with a beautiful 4K remaster that easily bests its HD counterpart, but features the same DTS-HD soundtrack as before. With a pair of new exclusives accompanying the same healthy selection of supplements, the overall package is the definitive ultimate edition fans and cinephiles will want to add to their library.