Acclaimed filmmaker Guy Ritchie brings his dynamic style to the epic fantasy action adventure "King Arthur: Legend of the Sword." Starring Charlie Hunnam in the title role, the film is an iconoclastic take on the classic Excalibur myth, tracing Arthur's journey from the streets to the throne.

When the child Arthur's father is murdered, Vortigern (Jude Law), Arthur's uncle, seizes the crown. Robbed of his birthright and with no idea who he truly is, Arthur comes up the hard way in the back alleys of the city. But once he pulls the sword from the stone, his life is turned upside down and he is forced to acknowledge his true legacy…whether he likes it or not. 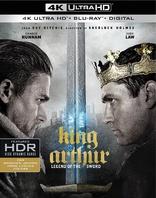 Borrowing heavily from a variety of mythological sources, Guy Ritchie's King Arthur: Legend of the Sword wastes no time in making its intentions known. As a horde of face-painted barbarians storm a castle while riding atop gargantuan elephants, immediately recalling images of Tolkien's Lord of the Rings saga, the epic fantasy fable wants to be a contemporary retelling of a familiar folklore. It's told with all the spectacle and gaudy extravaganza that modern technology can afford — and a hefty price tag it was, setting Warner Bros back a cool $175 million — which is apparently where all the talent gravitated towards. Leaving the rest of the production to rely on a paper thin plot and an ensemble of mind-numbingly dull characters to carry it, the end result is a movie that feels episodic and quickly cobbled-together in the editing room. Then again, Ritchie's particular style is in the quick edits and rapid dialogue exchanges pivoting on some random, non-linear piece of exposition. And all that is evident here to a surprisingly annoying degree.

From a script he co-authored with three others who've done better than this, Ritchie, who's more admired for his rough-around-the-edges but spirited action comedy heists, clearly wants to make his cake and eat it too, working overtime to inject his unique brand of gritty realism to the fantasy genre. There is a clear attempt to eschew from the standard folktale telling of the legendary Briton who united a nation in turmoil and formed the Roundtable, aspiring to something like a PG-rated version of Game of Thrones, only without the political intrigue and betrayals. The movie stars Charlie Hunnam (Pacific Rim, The Lost City of Z) in the title role, and he plays the character with a gruff, off-putting vainglory that's nowhere near as charming as the filmmakers fantasize it. Found floating down the river after the death of his father (Eric Bana) and his mother by prostitutes who raised him, this Arthur comes with pseudo-Biblical origins that imply his street-smart altruistic nature, but his reluctant-hero haughtiness makes for annoyingly unpleasant company. 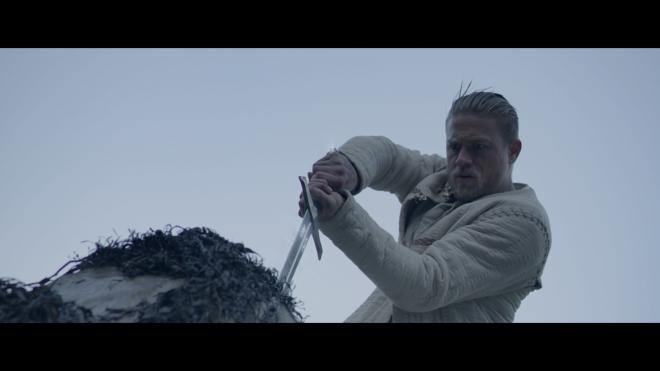 But rather than show anything that could make Hunnam the least bit likable, Ritchie and his team must keep things moving, almost as though checking off a foreordained list for conjuring the perfect hero story. (Oh, I don't know, perhaps something like Campbell's "Hero's Journey.") Only here, this prophesied champion for good is a skilled warrior long before the story proper, as shown in a three-minute montage sequence at the beginning. Thus, making a later training in the "Darklands" inconsequential and redundant. Cocky and insolent as he is, Arthur nonetheless manages to put together a band of merry men to follow him, such as Djimon Hounsou and Aidan "Littlefinger" Gillen of Game of Thrones. (Hero surrounded by allies. Check!) Weirdly, the plot does away with the all-important mentor, which in Arthurian legends would be Merlin, except to mention his name as some outside conspirator pulling the strings for putting Arthur on the throne. The role is instead given to the medieval wizard nameless disciple (Àstrid Bergès-Frisbey), but she's wasted doing busy work like concocting fruitless potions and snapping at Arthur to pick up Excalibur. (Check? Kinda)

As the saying goes, a movie is only as good as its villain, and Guy Ritchie's King Arthur pretty much proves that sentiment when providing audiences with one of the vapidest and humdrum bad guys in a long while. And sadly, Jude Law is tasked with the responsibility of making this production the least bit interesting, but fails so miserably in the role of family-murdering Vortigern that he should cast a spell on the world to forgot he ever made an appearance. Aside from summoning a demon knight to do his fighting, he never feels like much of a threatening obstacle to Arthur and his tiny army. Unless we count an intimidating scowl as a weapon. (So, I guess another check?) To offset much of the testosterone seriousness saturating the air — every few minutes, characters are measuring the length and firmness of their swords — Ritchie tries to instill a bit of humor, but much of the joshing about falls flat. So, it would seem as though the movie was sloppily piecemealed together and set on a downhill slope towards failure from the start because there's little saving this medieval fantasy mess. Let the Lady of the Lake take it to the bottom and pray it never resurfaces.

Warner Home Video brings Guy Ritchie's King Arthur: Legend of the Sword to Ultra HD Blu-ray on a two-disc combo pack with a code for an UltraViolet Digital Copy. When redeeming said code via WB.com and VUDU, it unlocks the SD, HDX (1080p) and 4K UHD with Dolby Vision HDR. The dual-layered UHD66 disc sits comfortably opposite a Region Free, BD50 disc, and both are housed inside a black, eco-cutout case with a glossy slipcover. At startup, viewers are taken to a generic static screen with options and music. 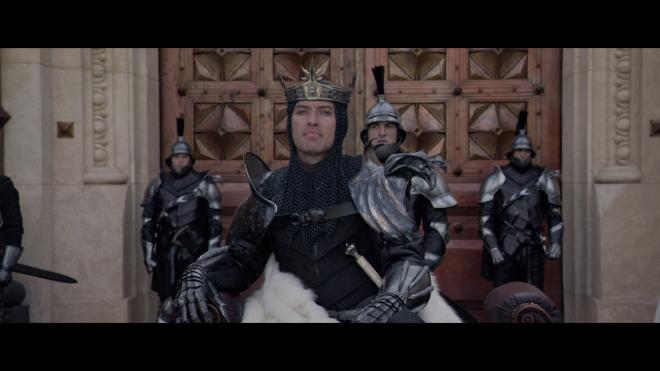 Shot entirely on the Arri Alexa camera systems, which maxes at 3.4K resolution but later mastered in a 2K digital intermediate, the stylized photography displays a good deal of texture with contrast levels that have been greatly restrained and muted. As with its HD counterpart, this gives the story and setting a very dreary and somber feel, as though the kingdom under the rule of King Vortigern were in perpetual gloominess. But in HDR10, this atmospheric tone is more pronounced, making the 2160p video grayer and more monochromatic. Thankfully, whites remain crisp and clean while specular highlights appear significantly brighter, providing a more brilliant shine and glimmer in the clouds, the sunshine bouncing off the metal armor and in the blue-lit lettering on Excalibur. Unfortunately, there is also evidence of hot spots and blooming at various times, most apparent from the glare of the sun on faces consuming finer details.

Still, the picture comes with excellent visibility into the far distance and for the most part, is highly detailed with distinct, fine lines in the clothing, the stone architecture of various locations and in the surrounding foliage. Facial complexions can appear somewhat flushed and sickly, but are often healthy and revealing, showing individual pores and negligible blemishes in the entire cast. The stylized digital look, however, does affect other areas of the 2.40:1 image, showing a few soft, blurry moments mostly related to extreme wide shots, panoramic views of forest areas and some of the less than stellar CG imagery. There are also several instances of aliasing along the sharpest areas and visible in the stone steps leading to the entrance of castles. More problematic is what appears like mild hints of digital noise or simply poor resolution in several of those aforementioned wide shots, suggesting this encode was upconverted from a 2K source.

On the positive and more appreciable side, brightness levels are notably improved with deeper, darker shadows. The black armor of Vortigern's army are markedly inky and luxurious while still revealing some stunning gradational detailing in the design and distinct differences between the various shades. However, some of the poorly-lit scenes tend to be a bit too dark and occasionally the smaller background objects and details can be lost in the shadows. The palette is also somewhat affected by the deliberate photography where secondary hues seemed largely limited and non-existent, but it's still a fairly colorful film nonetheless, particularly during the daylight exteriors when the presentation is awash with a light golden hue. Primaries remain bold and well saturated throughout. The nameless mage's outfits shine a brighter blue, blood is of a deeper crimson color, and viewers can now actually see the emerald-green jewels in Vortigern's crown. The best moments are when the demon knight makes an appearance, as he is continuously surrounded by a sparkling array of yellow, orange and red in the embers floating off his body. 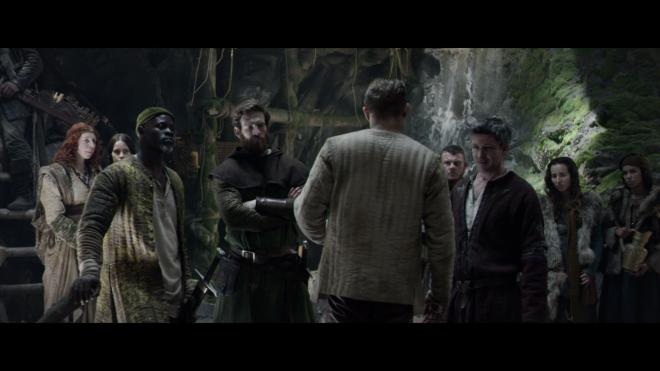 This contemporary re-interpretation of the mythical Briton charges to home theaters with the same excellent and satisfying Dolby Atmos soundtrack heard on the Blu-ray. While it doesn't compare to some of the best we've heard on the object-based format, the design does hold its own fairly well with several amusing bits that fill the room.

From the start of the movie, Daniel Pemberton's score crowds the entire soundstage and the front heights with a half-dome wall of sound, exhibiting superb clarity and distinction within the mid-range. A majority of the activity is also placed in the fronts as various noises fluidly move between all three channels with convincing off-screen directionality, creating a wide, spacious image that's continuously engaging. Dialogue reproduction is distinct and precise in the center, allowing every grumbling, mumbling line to be heard with great intonation. The loudest segments maintain superb definition in the upper frequencies while debris spreads into the surrounds and occasionally bleeds into the ceiling speakers.

Interestingly, quieter scenes also come with the subtle sounds of local wildlife to create a rather lively soundfield, but the overheads are not really put to much use and in fact, are pretty silent during these scenes. The failed assassination sequence is a nice highlight when the exploding arrows ring in the fronts or the sides and sometimes right above the listening area. There are a few other scattered moments where the heights are employed to great effect, but they are far and few in between. A more notable disappointment would be the less-than-satisfying low-end. To be fair, there is plenty of mid-bass to enjoy, providing the action with some weight and depth, but the design never digs much deeper, particularly during certain moments that suggest a deep, floor-vibrating rumble, such as when Arthur holds Excalibur with two hands summoning the sword's magical powers.

But, that's a small quibble in an otherwise highly enjoyable soundtrack. 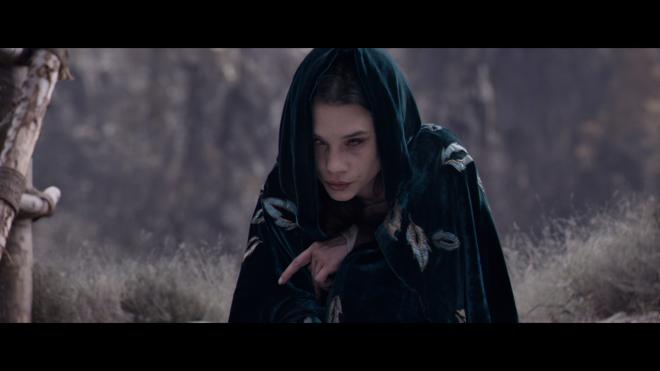 Building on the Past (HD, 14 min): Closer look at the production design and costuming.

Camelot in 93 Days (HD, 10 min): The challenge of bringing a legend to life in a three-month schedule.

Inside the Cut: The Action (HD, 6 min): Interviews discuss the stunt choreography and challenges.

Legend of Excalibur (HD, 6 min): Short discussion on the modern twist to a legendary sword.

Scenic Scotland (HD, 6 min): A brief tour of the shooting location on the day of wrap. 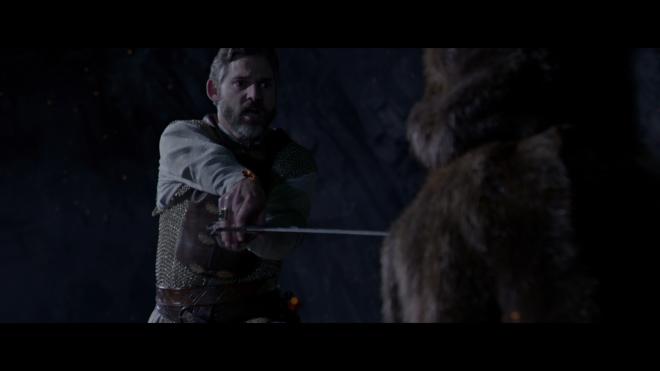 Borrowing heavily from a variety of mythological sources, Guy Ritchie's King Arthur: Legend of the Sword wastes no time in making its intentions known while stringently devoted to the foreordained monomyth. At the same time, the filmmakers eschew from the familiar folktale telling of the legendary Briton who united a nation, aspiring more to something like a mind-numbingly dull, PG-rated version of Game of Thrones. The fantasy epic lays siege on 4K Ultra HD Blu-ray with a good-looking picture quality and the same excellent Dolby Atmos mix as the Blu-ray. Supplemental material is on the light side and pretty lackluster. However, fans of both the movie and Ritchie should be happy with the overall package.