When Gru, the world's most super-bad turned super-dad has been recruited by a team of officials to stop lethal muscle and a host of Gru's own, He has to fight back with new gadgetry, cars, and more minion madness.

What made Despicable Me such an entertaining surprise in 2010 was its unpredictability. The story of a Bond-like super villain adopting three orphan girls as part of a larger scheme to steal the moon offers just enough twist and turns to make the heart-warming conclusion somewhat unexpected. Granted, once the girls show a shared excitement for Gru's appetite for destruction after winning a fluffy stuffed unicorn at a carnival, the ending is admittedly easy to guess. However, the direction and precisely how it arrives at that well-earned finish is what keeps audiences on their toes, serving up a wonderfully hilarious ride. Ultimately, the film's success relies on our being uncertain of how it would all come together.

In this follow-up, much of that unpredictability seems to have vanished, along with some of its charm. It's not a complete loss, but it doesn't quite have the same enthusiasm, or capture the same appeal of its predecessor. Directors Pierre Coffin and Chris Renaud still manage to deliver plenty of expected laughter and silliness in Gru's adventure of balancing parenthood and a new career as a spy working for the good guys. As in the previous film, those little, yellow, pill-shaped Minions are a major source of merriment, pulling triple duty as house cleaners, babysitters, and makers of experimental fruit jelly. Various cultural jabs and visual gags -- very obscure references to Isaac of The Love Boat and Invasion of the Body Snatchers are particularly hilarious -- are also in big supply throughout.

In spite of that, the storyline offers fewer surprises than before, and it's all mostly due to a conclusion that's much-too easily foreseeable. In fact, the animated sequel essentially announces its intentions right from the start and remains very focused on that theme. Picking up soon after the events of the first movie, the topic of Gru (Steve Carell) finding love — and potentially a good mother for his adopted girls (*wink, wink*) — is almost immediately brought up during a birthday party for Agnes (Elsie Fisher) when a nosy neighbor tries to set him up with other women. Predictable as the ending may be, I will admit this does build up to some amusingly memorable bits of situational comedy. Seeing Gru on a date with a woman who really hates fakes had me laughing pretty hard. 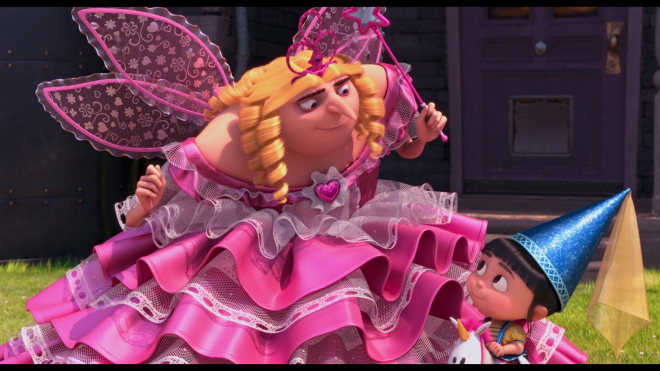 But again, these inspired and expected moments are then balanced with reminders of the story's direction and a less inspiring subplot. While tomboy Edith (Dana Gaier) finds her inner ninja and Agnes talks about wanting a mom in her life, Miranda Cosgrove's nerdy Margo discovers love and heartbreak in Moisés Arias's underused Antonio Perez. This aspect of Cinco Paul and Ken Daurio's script has little effect on the overall plot other than to show Gru's parenting skills. To the rescue — both in terms of the film's overarching point and to arrange for more rambunctious silliness — is Kristen Wiig as Agent Lucy Wilde, an overly-confident super-spy groupie assigned to partner with Gru in search of a top secret, powerful mutagen. As much as I actually like the Lucy character, she's also the blatant love-interest device.

Thankfully, other aspects of Despicable Me 2 keep things lively and joyful — just enough to keep me from reaching for the remote to revisit its predecessor. Russell Brand returns as Gru's incredibly old gadget man, Dr. Nefario, and while he's never given a good piece of dialogue, the character plays an important role and used for another gut-busting gag involving his dreadfully slow motorized chair. The newest addition is also the animated film's best feature: Benjamin Bratt as Mexican restaurant owner Eduardo Perez, father of the aforementioned Antonio. Although the former villain known as El Macho brings tons of creative laughs to the screen, he never seems like much of a foil to Gru and vice versa. Still, it's enough to make this sequel a strong follow-up, but not quite as memorable or surprising as the first movie.

Universal Studios Home Entertainment brings Despicable Me 2 to 4K Ultra HD Blu-ray as a two-disc combo pack with a flyer for an UltraViolet Digital Copy. The dual-layered UHD66 disc sits comfortably opposite a Region Free, BD50 disc inside a black, eco-cutout case with a glossy, embossed slipcover. At startup, the disc goes straight to an interactive menu screen with full-motion clips and music playing in the background.

Gru and the girls battle villains, boys and mutant minions with a marvelous, eye-catching HEVC H.265 encode in Dolby Vision that defaults to HDR10 if you don't have a Dolby Vision capable display & player and puts the SDR/Rec.709 Blu-ray to shame. For example, the birthday party at the beginning, the metal helmets worn by the Minions come with a bit more of a glimmer and shine while the mall scene radiates with all the different colored stores.

As with the first movie also invading Ultra HD on the same day, the most immediate and massive improvement are the significantly brighter, wider array of colors, which make the HD version seem faded and somewhat dull by comparison, while HDR10 similarly lacks the same level of pop. Pick any scene throughout the entire movie, the image dazzles the entire 1.85:1 frame with a lavish display of pastels and resplendent primaries. The yellow little Minions are noticeably beaming, and when transformed into cuddly evil monsters, they have a deeper purple glow. While the afternoon sky lights up like a rainbow and the mall brightens the room like a candy-coated dream, the reds associated with El Macho costume, restaurant and home practically scream, and the blues and greens are intensely vibrant. Also, the flashback of El Macho in HDR10 has a stronger yellow push while in Dolby Vision, the yellow is lighter with more brown and amber, which feels more natural, revealing a few more details of the town and armored truck. Overall, this is, by far, the most lively and radiant the movie has ever looked.

Added to that, the 2160p video comes with significantly brighter contrast, giving the entire picture a glowing, fresh appeal while exposing the tiniest detail in every frame. Individual hairs and the stitching in animated clothing are razor sharp while the weathered leather jacket of Antonio looks more aged with several faded spots and wrinkles. The smallest object in the background is plainly visible and distinct, even in the darkest shadows. The transfer shows outstanding specular highlights, providing a twinkle in metal objects, a realistic sparkle in light sources and giving each minion a nice three-dimensional roundness as lights shine off their hairless bodies. Better still, black levels are more luxurious and remarkably inker with shadows that penetrate deep into the screen. Differences in the various shades are not only apparent, but those differences reveal a fantastic, lifelike texture in gloves, clothes and other random objects in the lab. The improved brightness in Dolby Vision compared to HDR10 exposes a bit more in the background, such as when Gru travels into El Macho's underground lair. While maintaining deep, opulent blacks in the shadows, the tiny pot marks and cracks on the wall are more defined.

All in all, this is simply a superb, reference-quality 4K presentation everyone should own.

Our favorite villain with a heart of gold fights bad guys with the latest new fandangled toy, a wonderfully energetic DTS:X soundtrack that brings the stunning visuals to life.

Much like its 5.1 DTS-HD MA counterpart, a majority of the action is contained in the fronts, except that imaging noticeably feels wider and more spacious with superb fidelity and warmth. Channel separation is splendidly balanced and movement across the screen is flawless with a few convincing off-screen effects bleeding into the front heights, adding a greater level of dimensionality and presence to the action. Amazingly, the midrange exhibits better clarity and crispness than before, revealing slightly more details between the loudest and quietest segments. Meanwhile, vocals are distinct and intelligible, and a robustly potent low-end provides each song selection with a pulsating beat and every action scene with palpable weight. The sides and rears are employed at various times, filling the room with a variety of discrete atmospherics and excellent directionality. On a few occasions, some of those effects also float into the overheads, namely during action sequences, generating a wonderfully satisfying and sometimes-immersive soundfield.

The same set of supplements are ported over and can be found on this release's Blu-ray disc, save for the Audio Commentary and Mini Movies, which are also available on the Ultra HD Blu-ray in 4K and HDR10.

The Making of the Mini-Movies (HD, 6 min): Standard EPK with interviews of the filmmakers and short clips.

Gadgets Galore (HD, 4 min): A discussion and closer look at the design of the gadgets used by the spies and villains.

Evil Minions (HD, 4 min): More interviews discussing a key plot point, their creative look and how they work in the film.

Gru, his Minions, and the girls return for another adventure battling supervillains in Despicable Me 2, which also introduces fans to two new and fairly funny characters, Lucy the spy groupie and El Macho. Entertaining and amusing as the film may be, the animated sequel doesn't quite deliver the same charm and enthusiasm as its predecessor, but it offers a fun time for the whole family.

Much like its predecessor, the animated sequel fights villains on Ultra HD Blu-ray with a stunning and immaculate picture quality in Dolby Vision and a highly satisfying DTS:X soundtrack. With the same set of supplements, the overall package will mesmerize the whole family with a superb 4K presentation.

Sale Price 13.7
List Price 22.98
Buy Now
3rd Party 5.7
In Stock.
See what people are saying about this story or others
See Comments in Forum
Previous Next
Pre-Orders
Tomorrow's latest releases