When a wounded Christian Grey (Jamie Dornan, "The Fall," Anthropoid) tries to entice a cautious Anastasia Steele (Dakota Johnson, How to Be Single, Black Mass) back into his life, she demands a new arrangement before she will give him another chance. As the two begin to build trust and find stability, shadowy figures from Christian's past start to circle the couple. Jack Hyde (Eric Johnson, "The Knick," "Smallville") and Elena Lincoln (Kim Basinger, L.A. Confidential, 9 ½ Weeks) intensify the story, determined to destroy the couple's hopes for a future together. 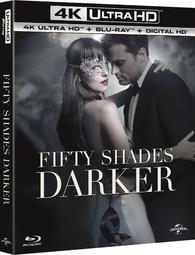 Sometimes it's okay to admit that you love to hate a movie. You may stare in complete and total dumbfounded bewilderment that a movie could be a massive success with a strong following allowing for sequels to be made. You can watch with bemusement as the creative team of the first film completely abandons working on the second with the snide hope that the second film will be so terrible that people will somehow wake up from their self-imposed fog. But that's not going to happen. Whether you like it or not, E.L. James' Fifty Shades novels and subsequent film adaptations are - for lack of a better term - cultural phenomena. Fifty Shades Darker may be terribly written, stiffly acted, and feature some of the most constipated direction for a film of this sort - but all of those things combine to create a final product that is howlingly entertaining - for all of the wrong reasons.

After things got out of hand, Anastasia Steele (Dakota Johnson) is no longer a "sub" for the domineering Christian Grey (Jamie Dornan). She's a free and independent woman working as an editor's assistant to Jack Hyde (Eric Johnson). Her life is on her own track, but it isn't before long that Christian returns to the scene. As a self-professed changed man, Christian is ready and willing to do anything and everything it takes to win back Anastasia and prove his true love for her - even if that means a life without rules. Just when Anastasia and Christian appear to have their romance on a healthy, if still slightly kinky track, Christian's dark history rears its ugly head. Anastasia is stalked by former "sub" Leila (Bella Heathcote). who is determined to know why she couldn't win the beast's heart, and Elena Lincoln (Kim Basinger), the woman who taught Christian everything he knows, isn't ready or willing to let her prized pupil actually fall in love.

The term "critic-proof" was practically invented for a film like Fifty Shades of Grey and it completely defines the core of Fifty Shades Darker. This is a bad movie. There's really no getting around that notion if you break the film down. The adaptation of E.L. James' novel performed by her screenwriter husband Niall Leonard takes an already tepid story and essentially pours ice water on the proceedings. Just when things start to get steamy, a cheesy laughter-inducing line of dialogue will come out of someone's mouth and completely stalls out any thrust. By the time the sexy bits get underway, the flaccid direction under James Foley fails to get the blood pumping and the scene limps to an anticlimax. It would be a boring movie if not for the fact that it is so wildly unintentionally hilarious that it manages to redeem itself. I admit it. I was entertained by Fifty Shades Darker.

While just as stiff and lacking in genuine chemistry as ever, I have to give credit to our two leads Dakota Johnson and Jamie Dornan for once again jumping into the fray. These are thankless roles. Their characters aren't well written, they're given terrible dialogue that would make most actors recoil in horror or blow every single take from laughter. Somehow, they manage to get through it. Much like the Twilight Saga before it, the Fifty Shades films are merely stepping stones for them, a means to get these actors the attention they need to secure better roles - and hopefully a percentage of global box office grosses; they deserve the hazard pay.

Following the notion that Fifty Shades of Grey is virtually critic-proof is the realization that no matter how much you pick apart the slim story and weak plot, the film still is what it is - for better or worse - cinematic junk food. You could write behavioral science doctoral dissertations about how the relationship between Anastasia and Christian is the antithesis of a healthy romance. You could dedicate an entire segment in screenwriting structure and how to build suspense with Bella Heathcote's Leila and how she disappears for over an hour of the movie at a time resulting in a complete lack of tension when her arc comes to a head. Podcasts could be dedicated to Kim Basinger's pointless Elena while speculating how much she must have been paid to appear in this film in the hopes that people would remember the infinitely more steamy and entertaining 9½ Weeks. One could do all of this, but it would be a relatively pointless exercise because if you just sit back and ironically enjoy the movie the same way that you would watch The Room or Plan 9 From Outer Space, you may actually have some fun with Fifty Shades Darker. At its core, Fifty Shades Darker is a One-Star movie that provides Five-Star entertainment value. Just don't even try to take it seriously.

Fifty Shades Darker arrives on 4k UHD courtesy of Universal Home Video in a two-disc UHD, Blu-ray, and Digital HD set. Pressed on a BD-66, the disc is housed in a two-disc standard black Blu-ray case with identical slipcover artwork. The disc loads directly to a static image main menu. From the Play function, you can choose to watch the 1h. 58m. R-rated theatrical cut or the Unrated 2h. 12m. extended version - even with the extra 14 minutes, there's really little to no difference between the films.

Fifty Shades Darker takes a giant leap up the 4K chain with this 2160p HDR presentation. Shot natively in 3.4K and up-converted from a 2K master, I was already impressed with the detail levels of the image so I wasn't anticipating that big of an improvement, but it's plain to see. Right away you can spot the increased amount of detail information in the production design work and the clothing. Individual facial features are impressive as you're given every opportunity to count individual hairs of Jamie Dornan's beard stubble. Skin is naturally given plenty of close up attention considering the uh, content of the film.

With HDR, the image is given a full range of colors. Flesh tones deepen slightly and look much more healthy and lifelike. Primaries have a terrific amount of pop and natural presence and the infamous Red Room looks amazing. Where the colors really shine are during daylight outdoor scenes with full sun. When our lovers are out on a boat, the crisp and beautiful pallet makes it look like a nature documentary they're so clear and vivid. Coupled with velvety black levels, this 4K transfer is a marked improvement over its 1080p counterpart. If you're a fan of this film and can go 4K UHD Blu-ray, don't settle for anything less.

Packed with the same strong DTS X audio mix as the Blu-ray, Fifty Shades Darker, unfortunately, doesn't make the best use of the medium. That isn't to say that this is a poor quality audio track, it's perfectly good, but when you read that a premium audio format like DTS-X is attached, you naturally go in with a certain amount immersion expectation. Dialogue comes through perfectly clear with plenty of element separation. Sound effects, backgrounds, and Danny Elfman's score fill out the scenes providing a great sense of atmosphere with plenty of channel movement and activity. The soundtrack gets its due time to roll out the popular pop songs of the hour and they sound great. Why I fail to be fully impressed with this mix is the fact that the film just doesn't make great use of the DTS-X format. Aside from a scene on a boat, the masquerade ball, and a couple other party scenes, there really isn't any sense of immersion. For the most part, everything takes place indoors in closed rooms that lack that expectant three-dimensional atmosphere one would normally hope for. Again, this is a perfectly good track that serves the film well, but it didn't wow me as I had hoped it would.

All of the bonus features content is found on the accompanying Blu-ray disc. Considering the critical drubbing and the slightly depleted box office return of this outing, I was surprised by the breadth of the bonus content assembled. While much of it does consist of the tried and true EPK interview bits, there is actually some relatively interesting pieces to be found here. Naturally, they dodge the meaty bullet of discussing why none of the key creative people from the first film declined to return.

A Teas to Fifty Shades Freed (HD 00:35) This is your tried and true teaser trailer that more or less just announces the Valentine's Day 2018 release date than anything.

Deleted Scenes (HD 1:53) These two brief scenes add so little and are so pointless to the whole that it's kind of weird that they were even included.

Writing Darker (HD 3:16) E.L. James very briefly talks about writing the novels and how they grew into a trilogy then we quickly get to hear from producers and James'a husband Niall Leonard about the adaptation process.

A Darker Direction (HD 4:42) Another quick and brief look at James Foley's work leading up to Darker and his approach to this film.

A Dark Reunion (HD 7:58) Cast and crew discuss what it's like working on a project this long and growing together as a cast.

New Threats (HD 8:54) This is the more entertaining of the assembled bonus features as they discuss all of the characters who are supposed to be ominous threats but really aren't anything to worry about making the piece kinda funny.

The Masquerade (HD 6:35) This is an interesting brief piece because they talk about what it took to stage a large-scale sequence with numerous extras and costumes.

Intimate with Darker (HD 7:14) This is a quick bit about what went into shooting the sexy stuff while trying to deepen the characters.

Given its standing in the cultural zeitgeist, you know what you're getting into with Fifty Shades Darker. This isn't a film about a healthy timeless romance; it's a pseudo-exploitation flick with a big budget and semi-attractive lead actors willing to take their clothes off. While the story and plot fail on virtually every level, the film manages to provide an amount of unintentionally hilarious entertainment. It's satisfying junk food entertainment the same way you buy a greasy slice of pizza from a subway vendor - you know you shouldn't, it's not good for you, but you're going to do it anyway.

Universal Home Video brings Fifty Shades Darker to 4K UHD Blu-ray in outstanding fashion. The added detail resolution and the HDR pop really brings the image to life with beautiful results. Toss in the same solid audio mix, and the full assortment of extra features from the Blu-ray disc, this is a pretty great release. But, it's not for everyone. While I enjoyed the film ironically, it's not a movie most folks will care to see, let alone own in their respective collections.

I'm calling it recommended IF you really love the movie and are a die-hard fan of the franchise.