Why Him? - Ultra HD Blu-ray

Bryan Cranston and James Franco fight the ultimate battle of wits and wills in this outrageous, no-holds-barred comedy from filmmaker John Hamburg (I Love you Man, Along Came Polly, Meet the Parents, and Zoolander). Ned (Bryan Cranston), an overprotective but loving dad, and his family visit his daughter at college, where he meets his biggest nightmare: her well-meaning but socially awkward Silicon Valley billionaire boyfriend, Laird (James Franco). A rivalry develops, and Ned's panic level goes through the roof when he finds himself lost in this glamorous high-tech world and learns that Laird is about to pop the question.

Finally, a comedy that confronts the real-life anxiety and agonizing ordeal of meeting a significant other's parents, the internal anguish of gaining the approval of potential in-laws. But before delving into a deeper analysis of the phenomenal brilliance behind Get Out, we must make do with a more conventional and standard take on the concept in Why Him?

It's no surprise Hollywood recycles, retools and reimagines familiar and undemanding plots for quick mass consumption. And the "meet-the-in-laws" trope is one of the most popular, dating as far back as 1941's Love Crazy in movies, and as familiar as they come, which funny enough, sort of goes counter to what these stories generally aspire at. Still, when done right, they can be quite entertaining (Meet the Parents), or when done badly, they can go horribly wrong (Guess Who). This latest rendition of the well-known conceit falls somewhere in between. That is, if the argument that it could've been worse serves as a kind of back-handed praise for a story that simply runs its course expectedly and without fail.

Setting the tone for the rest of the R-rated comedy, we meet our two would-be rivaling protagonists on separate occasions and the woman caught in the middle of their opposition. Laird Mayhew (an overtly enthusiastic and game James Franco) is Stephanie's (Zoey Deutch) blunt and genuinely forthright boyfriend and CEO of a video game app company. Her father, Ned Fleming (an equally game if also a bit more subdued and restrained Bryan Cranston), is a conservative and straightforward suburbanite CEO of a printing company. Before the two men meet face to face, Laird exposes more of himself than intended on a video conference chat with Steph during Ned's birthday. 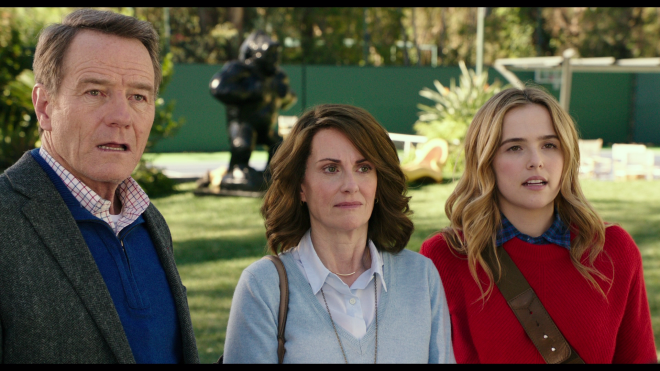 In these few minutes, it's easy to predicate where this is going and exactly how these two are going to butt heads while also behaving like buttheads. Weirdly, there is something comforting about this familiarity and its predictability, almost as though screenwriters Ian Helfer and John Hamburg, the latter of which also serves as the film's director, were doing it deliberately. We know dad will have a problem with his daughter's paramour, his modern lifestyle, which is a mansion with a wildlife sanctuary and decorated with abstract art, and the young man's brazen, unbridled honesty. But in the end, the two will discover they are more alike than they initially thought and learn to be accepting of one another. And for the most part, this is precisely what we are given in Why Him?

However, the journey there is where the filmmakers manage to surprise audiences, layering this usual odd-couple tension with some cleverly timed gags and a great deal of heart hiding beneath the raunchiness. Much of the humor is the customary series of gross-outs and cringe-worthy dialogue that makes everyone uncomfortable, some of which are bad one-liners desperately begging for approval. A bathroom poop joke here, a fall into a tank of moose urine there, and a boococky reference for good measure. But those passing the smell test earn genuine laughs and are accepted into the family, making up for the production's more lackluster aspects.

There's also something oddly refreshing about Hamburg's film, something about the filmmaker's storytelling style that reaches just beyond the surface without pretending to be more than what is, similar to what we've seen in his Zoolander and I Love You, Man. Rather than having the boyfriend put on an act to impress the parents, Laird bursts onto the screen as he truly is, which is sadly more a fault than to his advantage. Nevertheless, he goes to extreme measures, from tattoos to bowling alleys, to be accepted and loved by Steph's family, and we're given little tidbits on his background as the story progresses that largely explain his personality without hammering it in. And I also quite enjoyed the underlying tension between Laird and Ned coming from two vastly different viewpoints on the future of business. Ned holds on tightly to traditional interpersonal relations but in a slowly dying and increasingly dwindling market that's rapidly being replaced by the internet and social media. This fact is never really brought to the forefront as Ned's reason for disliking Laird, but Hamburg respects his audience enough to see it as part of latent vexation.

Ultimately, what makes Why Him? an enjoyable enough and generally satisfying comedy are the performances, starting with Cranston's uptight fuddy-duddy. A successful family man and business owner, a former rebellious youngster and KISS Army member, Cranston comes with a great screen presence that dominates the spotlight. Even while sharing the scene opposite Franco, it is still the award-winning actor of Breaking Bad, All the Way and Trumbo that draws our attention, looking at his reactions to the strange Laird with genuine sincerity and solemnity. Megan Mullally as Ned's wife is a complete joy, providing little laughs throughout with unexpected responses, and Keegan-Michael Key's Gustav adds a great touch to some of the most ridiculous moments.

While its familiarity and predictability fail to gain wholehearted acceptance, its more unique and stranger attributes earn approval into the comedy fold.

20th Century Fox Home Entertainment brings Why Him? to Ultra HD Blu-ray as a two-disc combo pack with a flyer for a Digital HD Copy. At the moment, we are unable to verify if the correct size of the content, but the dual-layered UHD66 disc sits comfortably opposite a Region Free, BD50 disc inside a black, eco-cutout case with a glossy slipcover. At startup, the UHD goes straight to a main menu screen with full-motion clips and music.

The weird, creepy video game mogul wraps its octopus tentacles around our Ultra HD Blu-ray home with a stellar HEVC H.265 encode that delivers an excellent upgrade over its Blu-ray counterpart.

The 4K presentation is continuously vibrant and full of life, largely thanks to an amazing, lively palette that bathes every scene with a slightly larger array of warm, cheerful secondary hues. Flesh tones are appropriate and realistic with a hint of rosiness in the cheeks while pinks, yellows and purples glow with appreciable realism. Primaries are surprisingly more sumptuous and rich, such as Stephanie's red sweater and the lush, true-to-life greens in Laird's forest-like yard, keeping the comedy animated and vibrant from beginning to end. One of the most impressive moments is when Laird and Stephanie are doing yoga in the early morning and the sun's rays bathe the entire screen with orange-yellow glow while a small hint purple in the distance fades into a crystal blue sky.

Kris Kachikis's photography also radiates with pitch-perfect contrast and crisp, sparkling whites that allow for pristine clarity and visibility in the distance. Although a few moments of mild softness remain throughout the runtime, resolution is greatly improved and the negligible aliasing seen in the 1080p version are thankfully missing here. The fine lines in the surrounding foliage, the abstract sculptures and the furniture decorating Laird's modern house are razor sharp, and the threading in clothing are incredibly detailed with distinct, fuzzy textures in the fabric. Facial complexions remain extraordinarily revealing while appearing more natural and lifelike, as well. Also, specular highlights are more precise and discrete with the sun shining off various objects and faces more realistically. Black levels are pure and true with a richness that delivers excellent gradational differences, providing the 1.85:1 image with a lovely cinematic quality and making this 2160p video a step up.

The awkward Holiday get-together shows up at the door with the same enjoyable DTS-HD MA 7.1 soundtrack as its Blu-ray counterpart, satisfyingly exceeding expectations for a movie of this caliber. Rear activity is surprisingly busy with the sounds of the exotics animals living in Laird's farm-like sanctuary. Inside his house, we heard various subtle echoes of his employees working or the roaring commotion of guests during a house party. The excellent directionality generates a nice, enveloping soundfield.

Much of the action and attention, however, is directed to the fronts, delivering a broad and welcomingly spacious soundstage. Imaging exhibits distinct clarity and separation between the quietest and loudest moments, which comes in handy during the few sudden bursts of action, the aforementioned party, an expected helicopter landing down in the suburbs or when KISS music rocks the house. Dialogue is precise and crystal-clear at all times, allowing listeners to appreciate the soft distress and anxiety in Bryan Cranston's voice compared to James Franco's garish, unfiltered enthusiasm. A robust and sometimes substantially weighty low-end provides depth and presence to the song selections and the design as a whole.

Audio Commentary: Director John Hamburg is joined by co-writer Ian Helfer and editor William Kerr for a mildly interesting if also somewhat entertaining discussion on the production, the plot and the performances while also swapping memories from the set.

47 Minutes on the Can (HD, 7 min): A more detailed look at the scene where Bryan Cranston's character fails at using the smart toilet.

Lou the Entertainer (HD, 4 min): Much of the same, except centered around Cedric.

On the surface, Why Him? is the standard and very conventional "meet-the-in-laws" trope, offering very few surprises and delivering on its promise without fail. Nevertheless, with great performances from Bryan Cranston, James Franco, Megan Mullally and Keegan-Michael Key, the raunchy comedy comes with enough laughs and heart to make for an entertaining, albeit ultimately forgettable, watch. The Ultra HD Blu-ray arrives with stellar 4K video and an excellent audio presentation, but the supplements are rather lackluster. Still, the overall UHD package is Recommended for fans.