It's Harry's third year at Hogwarts; not only does he have a new "Defense Against the Dark Arts" teacher, but there is also trouble brewing. Convicted murderer Sirius Black has escaped the Wizards' Prison and is coming after Harry. 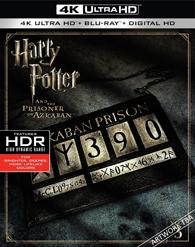 Early on, I wrote off the Harry Potter series as a watered down 'Lord of the Rings' aimed at preteens on both sides of the Atlantic. But the further the series moved away from the kiddie fare that saturated Sorcerer's Stone and Chamber of Secrets, the more I've come to appreciate J.K. Rowling's epic coming of age story. Harry Potter and the Prisoner of Azkaban is the third film in the series, and the first to take a decidedly dark turn into the underbelly of Hogwarts and the infamous legacy of its most notorious alumni.

Harry (Daniel Radcliffe), Ron (Rupert Grint), and Hermione (Emma Watson) return for their third year of witchcraft and wizardry training only to be met with the news that a vicious criminal named Sirius Black (Gary Oldman) has escaped from Azkaban Prison. Once a trusted ally of the evil wizard Voldemort, Black is now desperately searching for Harry in an attempt to finish the job his master could not. To Harry's relief, creatures called Dementors are dispatched to the school to protect the students and capture the would-be-assassin. But the Dementors have a strange effect on Harry that calls their true motivations into question. Everything is not as it appears, and Harry begins to search for answers about the death of his parents, the threatening presence of Black, and the ever-looming threat of Voldemort.

Director Alfonso Cuarón (Y tu mamá también, Children of Men) picks up the reins from director Chris Columbus and delivers a more complex tale of Harry's adolescence. Cuarón's confident vision of the Potter universe pairs Rowling's themes with those he's explored in his other work to change the entire tone of the film without allowing it to feel disconnected from Columbus's entries. Indeed, just one look at the film's cinematography says volumes about Cuarón's approach -- the rich colors of the first two Potter films may have been replaced with a monochromatic chill, but it feels like a natural progression that continues to subtly depict Harry's mounting unease with the world around him. Best of all, Cuarón draws deeper performances out of his maturing cast. The three young heroes finally have an edge to their personalities, an untapped aggression they can't define that's simply waiting to be unleashed.

Older viewers will also be pleased to find that Black and the Dementors aren't the only ominous elements introduced into the saga -- the entire school seems to be cloaked under the darkening shadow of Voldemort and his minions. There's a palpable tension in almost every scene and the warm-fuzzies of the first two films are far less intrusive this time around. While it rarely amounts to more than just a tease of the bleak events waiting for Harry in future installments, Prisoner of Azkaban does a much better job of satisfying older film fans like myself who want more out of their fantasy than flowery spells and wide-eyed wonderment.

My biggest complaint is merely a matter of taste. For every startling twist and menacing development, there are several lighthearted distractions that keep Prisoner of Azkaban from feeling like a cohesive whole. I don't blame Cuarón -- returning for his third film in the series, screenwriter Steve Kloves again falls into the trap of trying to cram in too many fan favorite moments from the books. While a better balance might have been struck in a four hour film, the final edit of Prisoner of Azkaban is arguably too short to handle the bipolar natures of its light and dark elements. Moments that would seem to be insanely traumatic for the characters are regularly followed by schoolyard shenanigans that make it seem as if the kids have completely forgotten what just happened. The truncated nature of the film inadvertently stunts the emotional believability of Harry and company, resulting in a flick that feels at odds with its runtime and its source material.

In the end, an intriguing story, a darker tone, and the addition of several additional top notch performances can't save Prisoner of Azkaban from having something of an identity crisis. Fans of the books and the lighter elements of the first two films will be more forgiving, but I constantly found myself wishing the story would quit wasting time with minor subplots and get to the point. Regardless, Prisoner of Azkaban remains a really good flick, and one that easily trumps its two predecessors.

Harry Potter and the Prisoner of Azkaban comes with a dual-layered UHD66 Disc, a Blu-ray Disc of the film, and a second Blu-ray Disc with all of the Bonus Materials. The Blu-rays are Region A Locked. There is an insert for a Digital HD copy as well. The discs are housed in a hard, black plastic case where two of the three discs are stacked on top of each other. There is a cardboard sleeve, too.

Harry Potter and the Prisoner of Azkaban flies onto 4K UHD with great HDR encoding. When people talk about the Harry Potter movies, they mostly gravitate to this film, because it was the change in tone, direction, and visual style that made the rest of the films darker with its own iconic look and feel. This is all in part by director Alfonso Cauron (Gravity, Children of Men). Whatever earthy and warm colors and tones the previous two films had are gone here and replaced with a decaying look of many greens and blues. Places and people look paler as if something is lurking in the depth of Hogwarts, waiting to emerge.

Colors look fantastic here with tons of depth in the distinct color palette. The whole image looks very story-book fantasy like and never fails to bring the withered colors to life with this enhanced HDR. The colors of the big pumpkins in the field look excellent in contrast to the green pastures and brown houses. The many different greens in the trees and grasses look incredible, while the beiges and brown stones on the castle looks quite wonderful. You won't really get any bright primary colors here, even on the many house scarves that are worn. The bright wand light shines brightly, but still has a subdued look to it, too. It's just amazing to watch how all these colors came across here.

The detail is also upgraded with every hair showing up on the werewolf in the moonlight. You'll be able to see the different colors in the moon glow of the werewolf's skin and hairs. Sirius Black's weathered clothes and hair also show all the imperfections and dirt easily on screen. Buckbeak's feathers show great detail as well as the creature soars through the air. Other wide shots look impressive and never soft, either. Black levels are always deep and inky and the skin tones are as natural as they can be, given the visual style of the film. Lastly, there are no instances of any banding, aliasing, or video noise.

This release comes with a great DTS:X audio mix and just sounds amazing, much like the other films here. The overhead speakers really come into play when the dementors appear. It sounds as if they are truly overhead, sucking the life out of you from all angles. The heft behind each dementor is truly amazing and will rattle the walls. The Quidditch match here comes with a big rain storm, so in addition to the students flying by and all the balls zooming across the soundscape in the air, you have thunder and rain falling down, which this audio mix handles perfectly.

You'll hear every rain drop from above and hear with precision the golden snitch as it quickly escapes its capture. The werewolf transformation sounds great as well, with decent bass in the background to add to the suspense of the whole scene. Other ambient noises are loud and robust and pour from the rear speakers quite often. The score always adds to the suspense in each scene, too. The dialogue is always clear and easy to follow along with and the track is free of any pops, cracks, hiss, and shrills, leaving this audio presentation with top marks.

Harry Potter and the Prisoner of Azkaban is perhaps the best film in the whole series in terms of story and visuals. Alfonso Cuarón really did change the landscape of how these films looked with this third film, which was a major change from Columbus' style. It was the right decision and added a great time-travel element to the whole thing that felt very much like Back to the Future in the best way possible. Not only that, the film had some great twists and grew darker with the ever present Voldemort. The new 4K UHD transfer with HDR looks incredible in this subdued color palette and the DTS:X audio mix is phenomenal. There are no new extras, but the previous bonus features from the Ultimate Edition are imported here on the Blu-ray Disc. Needless to say, this one is Highly Recommended!