Keeping Up with the Joneses - Ultra HD Blu-ray

Go deep undercover in this hilarious action-comedy with an all-star cast including Zach Galifianakis, Jon Hamm, Isla Fisher and Gal Gadot. An ordinary suburban couple finds it’s not easy keeping up with the Joneses — their impossibly attractive and ultra-sophisticated new neighbors — especially when they discover Mr. and Mrs. Jones are covert spies embroiled in international espionage.

It's very telling when an audience can literally track and count the amount of times they laugh in a comedy, which is what 'Keeping up with the Joneses' alleges to be. And apparently, two is the magic number for feigning a smile, like pretending to enjoy the company of your neighbors and forcing the occasional fake laugh at their idiotic jokes just to seem polite. The first genuinely funny moment comes when Zach Galifianakis opens a beer bottle with his wedding ring, imitating his suave, charmingly handsome new neighbor (Jon Hamm), but only ends up gouging his palm. I can't really explain it, but there's something funny in seeing Galifianakis physically punished as a result of his abject stupidity. The second laugh was hearing him mangle the word "jalapeño," followed by Isla Fisher providing her own mispronunciation. (It's pronounced "HA-la-peN-YO" people!) I can only guess the joke is meant to point out the naïve, sheltered bubble of their suburban life, hinting at some possibly clever cultural jabs on the part of the filmmakers.

However, that would suggest giving this mostly humorless dud far more credit than it deserves. The premise alone is intriguing enough, rife with the potential to probe ordinary suburbia in the 21st Century. But director Greg Mottola ('Superbad,' 'Adventureland') and his team squander every opportunity in favor of adhering to the standard spy comedy, which just happens to take residence in the typical all-American middle-class neighborhood. Much like the characters themselves, the visual and verbal gags are tediously prosaic and passionless, mostly because they are the same ones repeated from practically every comedy about the suburbs. With the kids gone for summer camp — how convenient! — Galifianakis and Fisher as married suburbanites Jeff and Karen Gaffney immediately go through the usual motions. Bored by the monotony of their routine and — haha! — sexless life, Jeff daydreams for a meaningful career while fed up interior designer Karen itches for more excitement in her day. 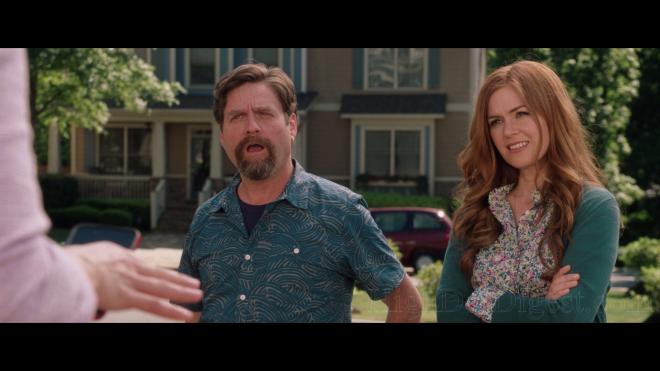 Not long after — but still waiting for the jokes to commence, which only makes the wait feel as though frustratingly forever — new neighbors Tim and Natalie Jones (Hamm and Gal Gadot) move in a couple houses down. Immediately, the filmmakers go out their way in making the Joneses appear like the most annoyingly perfect and glamorous couple to ever grace the planet, which really wouldn't be such a big deal if they also somehow injected this mind-numbingly stale comedy with, some shimmer of life and hope. Being successful travel writers with a penchant for uniquely exotic foods, you'd think the cool and stylish pair would pick up a joke or two. Instead, audiences are distracted with scenes of Gadot acting threateningly while wearing highly revealing lingerie. Meanwhile, Hamm fishes for information about Galifianakis's colleagues in a scene that ultimately feels like a long setup for a stupid pratfall involving the consumption of snake meat, the venom of a viper's head and a drunk Galifianakis.

It's all a cover, of course, to hide their true intentions. But man, they must be the worst spies ever if busybody Fisher, who can't decide on being envious of her neighbors or irritatingly nosy, can discover their secret identities by simply following them. And as would be expected in something as generic and dull as this, 'Keeping up with the Joneses' has the completely opposite couples help one another's marriage. Most obvious, the Joneses help the Gaffneys spice things up and encourage them to seek adventures. While not as obvious but nonetheless predictable, the Gaffneys deliver a public service announcement about being more open and honest with one's spouse. And lest we forget, the Joneses prove themselves capable agents solving the mystery because, well, the plot dictates it. Snore! The filmmakers want to imagine suburbia is where middle age and the joys of a fulfilled life go to die, but they only succeed in making this cul-de-sac neighborhood the place where comedy withers away and suffers a painfully slow, agonizing death.

20th Century Fox Home Entertainment brings 'Keeping up with the Joneses' to Ultra HD Blu-ray as a two-disc combo pack with a flyer for a Digital HD Copy. At the moment, we are unable to verify if the correct size of the content, but the dual-layered UHD66 disc sits comfortably opposite a Region Free, BD50 disc inside a black, eco-cutout case. At startup, the UHD goes straight to a main menu screen with full-motion clips and music.

The Joneses move into the Ultra HD neighborhood with a lovely HEVC H.265 encode in HDR10 with a few astonishing moments that make this a nice improvement over its Blu-ray counterpart.

Made from a 35mm source, the freshly-minted transfer reveal the most minute detail, exposing the fine threading and fabric in the furniture and clothing. Facial complexions appear a bit more natural, showing every wrinkle and stubble in the faces of Hamm and Galifianakis while the tiniest negligible blemish can be seen on Fisher, and individual moles can practically be counted on Gadot during close-ups. And like the BD, the deliberately dreamy, soft focus photography is apparent though not quite as noticeable and thick while a thin layer of natural grain, on the other hand, is more apparent, giving the 4K presentation an appreciable filmlike quality.

Interestingly, the 2.40:1 image is not quite as bright as its 1080p peer, but contrast remains excellently balanced with brilliant, pitch-perfect whites. Specular highlights come with a nice spark, giving the light bouncing off random objects a realistic glow. Brightness levels are not really any stronger or richer, but blacks endure with good gradational differences between the various shades and excellent shadow detailing in the darkest portions of the frame. The same goes for the overall palette. However, colors are brighter and more varied with deep, animated reds, sumptuous blues everywhere and rich, lively greens in the neighborhood. The 2160p video is also aglow with vivid, luminous secondary hues that make this UHD an attractive watch.

Fox furnishes the spying neighbors with the same DTS-HD Master Audio soundtrack heard on the standard Blu-ray, delivering the action-packed goods though it won't likely rock the neighborhood.

Much of the attention is focused on the front soundstage, maintaining excellent balance and separation. Various background and off-screen activity occupy the two channels to generate a convincingly effective soundscape while the center delivers precise, distinct vocals from beginning to end. Some of the those effects occasionally travel into the sides and rears with great directionality and panning, creating a decently satisfying soundfield. But for the most part, the surrounds are not given much of a workout and reserved for when things finally get dicey for our fish-out-of-water couple.

The midrange is quite dynamic and surprisingly extensive, sustaining exceptional clarity and detail during the many explosive and loud action sequences. With that in mind, the low-end can feel somewhat modest and not particularly impressive, which is not to suggest it's bad. It is serviceable with some palpable weight in the music and action, but given the visuals, it's also feels pretty average and midlevel, much like our pair of suburban heroes.

Mixing the spy formula with a heavy dose of middle-class suburbia, 'Keeping up with the Joneses' offers nothing new to either genre while forgetting to be either funny or create an intriguing mystery to warrant the mayhem and high jinks. From the director of 'Superbad' and 'Adventureland,' Greg Mottola fails to make the best use of an otherwise talented cast. The Ultra HD Blu-ray arrives with a strong, satisfying 4K video presentation even though it's not a significant upgrade over its Blu-ray counterpart. On the plus side, the audio presentation is excellent, accompanied by the same collection of supplements, making the overall package worth checking out only for fans.

Sale Price 17.99
List Price 26.5
Buy Now
3rd Party 10.94
In Stock.
See what people are saying about this story or others
See Comments in Forum
Previous Next
Pre-Orders
Tomorrow's latest releases