From Oscar-Nominated producer Ridley Scott and director Luke Scott comes this visceral, edge-of-your-seat thriller with an all-star cast starring Kate Mara, Paul Giamatti, Toby Jones, Jennifer Jason Leigh and Rose Leslie. Inside a remote, top-secret lab, a group of scientists are working on an experiment that is leading the way for the next steps in human evolution. But when the experiment's subject – a genetically designed "human" (Anya Taylor-Joy) – triggers a terrifying event, those involved must decide if the promise of infinite potential outweighs the incalculable danger.

In the horror genre, there is a some level of stupidity and dumb decision-making granted to certain characters so as to move the narrative along and create suspense. This is not a hard and fast rule that filmmakers must follow. But this trait is a common enough trope throughout many movies as to be almost expected, even to some very small extent among reasonably bright, moderately smart characters. And it's for this reason that the latest sci-fi thriller 'Morgan' from producer Ridley Scott arrives as such a massively frustrating disappointment. As though following similar suit to his father's depressingly unsatisfying 'Prometheus,' Luke Scotts makes his feature-film directorial debut in a story bursting with stupid intelligent scientists that make asinine decisions and apparently lack even the most basic of critical thinking skills. It's high time the Golden Raspberry Awards include a Darwinian Award-like category celebrating portrayals of supposedly smart, rational people voluntarily selecting themselves out the gene pool of fiction.

Plucked from the silly, so-called "Black List" of unproduced screenplays, Seth W. Owen's script pretty much dives into its own dopiness with Brian Cox's sternly serious voice unnecessarily expositing on a scene shown only a moment ago. Although it doesn't follow any recognizable formula, which could have been to its advantage in the hands of a better-skilled filmmaker, the plot nonetheless follows a predictable order of chaos from these opening moments. In fact, one could envision the entire movie in their imagination based on the trailers alone, and not only would that have made a better piece of entertainment, it also probably would have played out exactly in the same way. And chances are, even the obligatory shock twist revealing the purpose of genetically breeding the human hybrid known as Morgan (Anya Taylor-Joy, who was much better in the greatly superior 'The Witch') will wrap up the mystery. In the end, there is nothing wholly original, exciting or worthwhile to convince people to watch this dreck. 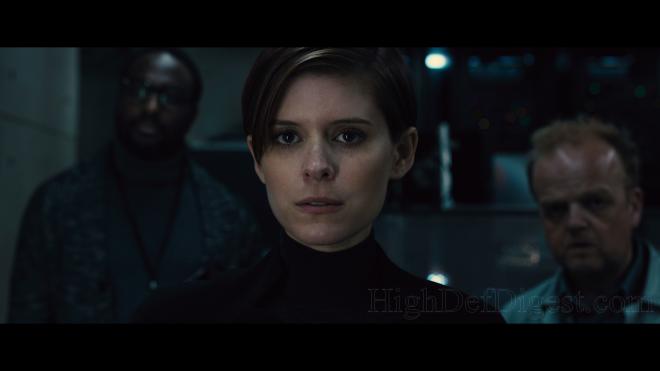 But before meeting the precocious and highly-developed five-year-old who looks thirteen, Scott attempts to demonstrate his skill at establishing an atmosphere of mystery. By which I mean to suggest there isn't any. Instead, when Kate Mara as Lee Weathers arrives at a gray and dreary home with an even drearier and grayer underground research facility, it feels as though Scott is forcefully dragging us through a meet-and-greet with some of the dullest people on Earth. As the deadly solemn and coldly austere risk-assessment specialist for a mysterious corporation, Mara is arguably the most interesting person on screen with a good deal of personality. And that's saying a lot amongst an ensemble cast of living-breathing mannequins when she's meant to be the least human of them all. And sadly, it's because of Mara's gravely odd behavior that a child could easily predict her pointlessly dark secret. It doesn't help Lee and Morgan clearly share a bond every time they stare at one another, as though knowing each other's sadness.

If that's not enough to ruin the suspense and any surprises in 'Morgan,' which can't be considered as spoilers since Scott makes these plot points pretty obvious, then the smarter members in the audience will be infuriated by the stupidity of Morgan's creators, Dr. Lui Cheng (Michelle Yeoh), Dr. Kathy Grieff (Jennifer Jason Leigh) and Dr. Simon Ziegler (Toby Jones). It's reasonable to imagine they know the deviously sinister motives behind her design since they were hired precisely for this research, so then, why act as though having a parent-like attachment to the creature is somehow more noble and virtuous? Wasn't the whole point for it to be eventually taken away and used for its intended purposes? Besides, the creation turned out violent and defective, so the next logical step is to put it down and start over. Even worse, why hire others just to keep them in the dark, and they turn out to be complete idiots who are literally the cause for the ensuing mayhem and the death of everyone around? But here's a better question, why even make this idiotic mess when it was obviously "black listed" for a reason.

20th Century Fox Home Entertainment brings 'Morgan' to Ultra HD Blu-ray as a two-disc combo pack with a flyer for a Digital HD Copy. At the moment, we are unable to verify if the correct size of the content, but the dual-layered UHD66 disc sits comfortably opposite a Region Free, BD50 disc inside a black, eco-cutout case with a glossy slipcover. At startup, the UHD goes straight to an animated menu screen imitating the high-tech security footage seen in the movie while computer sounds play in the background.

Morgan is unleashed on Ultra HD Blu-ray with a strong HEVC H.265 encode in HDR10, offering an appreciable difference over the Blu-ray but sadly, not by much. But if giving a choice between the two, this would be the preferred way of watching the sci-fi thriller, providing a noticeable uptick in clarity and definition. The picture shows sharper, more detailed lines in the hair of the cast and surrounding foliage. Threading in the various clothes are more distinct, and the background objects inside the house and Morgan's bleak, concrete prison is made more discernible. Sadly, several instances of aliasing are evident, bringing overall quality down.

Although Mark Patten's heavily stylized digital photography feels all the colder and bleaker here, the squeaky-clean, sterilized picture allows colors to seem fuller and slightly brighter. The palette shows deeper reds in the clothing while blood is a bit more crimson, and blues and greens have an attractive, accurate glow. Secondary hues benefit most from the wider gamut, making the grayish overcast cinematography seem a tad warmer. The yellowish glow of lamps and from the sun are true and appealing. The faces of the cast not only reveal outstanding textural details and visible pores, but complexions come with a lifelike, reddish tone while Morgan looks much paler, sickly and more flushed than everyone else.

Presented in a 2.40:1 aspect ratio, the freshly-minted transfer is true to the deliberate intentions of the filmmakers, displaying a dreary, subdued contrast. The overall video is slightly brighter, but not by much. Specular highlights give metallic objects and the edges of other random items a nice polished, glistening glow, but the image still looks similar to its 1080p counterpart. Black levels are a noticeable and welcomed improvement, looking deeper and richer throughout. There are notable gradational differences in the darkest portions of the frame, and we can clearly make out a different shade of black between Kate Mara's outfits. And yet, shadows are on the slightly drabber side even though background information is better resolved and perceptible. In the end, this 4K presentation is the way to go when watching the film.

Luke Scott's directorial debut arrives on UHD with the same cracking and overall satisfying DTS-HD MA 7.1 soundtrack, but as before, it would have been nice if the studio offered the Dolby Atmos version heard in theaters, even if it were exclusive to this 4K presentation.

But as it stands, the design is quite enjoyable, employing the surrounds on various occasions and creating a reasonably gratifying soundfield. When in the underground bunker with Morgan, the voices of characters bounce off the concrete walls and echo all around with convincing effectiveness. During action sequences, of which there are not many, the sound of gunshots reverb with incredible distinction and realism, and in the last quarter of the runtime, cars whizz by into the side and rear speakers. Quieter, dialogue-driven scenes, of which there are many, are unfortunately lacking of any activity, falling noticeably silent. Even when Morgan is outside exploring a nearby forest, the conversation with Dr. Menser doesn't seem to feature much wildlife and atmospherics are sporadic at best.

As one might guess, much of the action is contained in the fronts, providing a wide and broad soundstage with plenty of appreciable warmth and fidelity. Even at its loudest, which really are the couple moments of guns being fired, the lossless mix maintains excellent detailed clarity thanks to a room-penetrating, extensive dynamic range. Max Richter's enjoyable score benefits most, spreading across all three-channels with excellent separation and balance while lightly bleeding into the surrounds. At the same time, vocals remain precise and well-prioritized throughout. Most impressive of all is the surprisingly powerful and authoritative low-end, delivering weight and presence to the music and the more suspenseful moments. On various occasions, the bass even hits ultra-low depths as low as 16Hz (bass chart).

Ridley Scott's son, Luke, makes his directorial debut in the utterly boring and frustratingly disappointing 'Morgan' where supposedly intelligent scientists behave very stupidly. Starring some familiar faces alongside bigger named stars, the sci-fi thriller cautioning the dangers of genetically engineering human hybrids is neither suspenseful, thought-provoking or cautionary, leaving very little reason to watch it. The Ultra HD Blu-ray arrives with a strong 4K video presentation, but it doesn't offer the night and day difference over its Blu-ray counterpart. On the plus side, the movie comes with the same excellent DTS-HD soundtrack, accompanied by a small collection of supplements, making the overall package worth checking out for fans only.

Sale Price 17.99
List Price 26.5
Buy Now
3rd Party 13.64
In Stock.
See what people are saying about this story or others
See Comments in Forum
Previous Next
Pre-Orders
Tomorrow's latest releases