Cited by film critic Roger Ebert as "the best mob movie ever," GoodFellas explores the criminal life like no other movie.  Following the rise and fall of a trio of gangsters over 30 years, it's an electrifying, fact-inspired tale of living – and dying. Based on the true-life best seller "Wiseguy" by Nicholas Pileggi, the film earned six Academy Award nominations, including Best Picture and Best Director and was named 1990’s 'Best Film' by the New York, Los Angeles and National Society of Film Critics.  In 2000, GoodFellas was selected for preservation in the National Film Registry by the US Library of Congress.

There isn’t much that I can say about 'GoodFellas' that hasn’t been stated before in far more elegant and scholarly terms by equally appreciative reviewers and fans alike.  It truly is a modern American masterpiece, in which every line of dialogue deserves your attention, and almost every scene stands out as its own dramatic set piece.  I’ve seen this movie in one form or another at least once a year (heavily edited on commercial television, or when I pop in my nearly ten year old Blu-ray), and I’m constantly bowled over by the sensational ensemble acting by Ray Liotta (Henry Hill), Robert De Niro (Jimmy Conway), Joe Pesci (Tommy DeVito), Lorraine Bracco (Karen Hill), Paul Sorvino (Paulie Cicero) and Tony Darro (Sonny Bunz) and the fast-paced storyline which keeps me transfixed for the entire two hours, twenty minutes.  From the gritty cinematography by Michael Ballhaus, to the pitch-perfect editing by Thelma Schoonmaker, punctuated by a soundtrack which is composed of timely pop songs rather than an orchestral score, 'Good Fellas' is a textbook example of just how astounding cinema can be.

‘GoodFellas’ begins with a simple introduction spoken fondly by the main character: “As far back as I remember, I always wanted to be a gangster.”  The movie ends with a self-loathing admission: “I’m an average nobody.  I get to live the rest of my life like as a schnook.”  In between those bookending statements is a propulsive and fascinating story, adapted from a book by co-screenwriter Nicholas Pileggi, about the rise and fall of gangster Henry Hill. ‘GoodFellas’ documents his experience in a mafia family, and presents characters which populate his lifestyle, including the violent and reckless Tommy DeVito played with manic energy by Joe Pesci, and the more level-headed Jimmy Conway, played by Robert DeNiro

Raised in a middle-class household by a Sicilian mother and Irish father, Hill has nothing but disdain for the working class (“For us, to live any other way was nuts.  To us, those goody-good people who worked sh-tty jobs for bum paychecks, who took the subway to work every day and worried about their bills, were dead.  They were suckers.  They had no balls.”) and devotes his life to a criminal organization who work and play together like a cult.  (“I knew everybody, and everybody knew me…I was part of something...”)  He gets married and has a family, but makes his living pulling heists, stealing money, dealing cocaine, and buying off the police, lawyers and judges. In time, however, Hill finds himself caught up with the drugs and the violence, and jeopardizes his personal and professional family as his actions catch up to him. 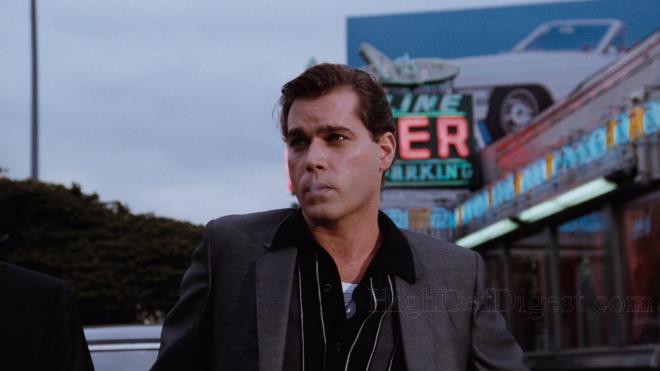 Aside from the compelling storytelling, 'GoodFellas' rewards the viewer with a dramatic depth and richness beyond all the smart dialogue and lively characters.  Unlike Francis Ford Coppola’s ‘Godfather’ movies which portrayed the mafia families with an air of royalty and stateliness, ‘Goodfellas’ approach is far more down-to-earth. (Compare the Corleone family’s close relationship with the Frank Sinatra-character, who serenades the bride at a grand wedding on their opulent estate, while Hill and his girlfriend “merely” get a front-row seat at a Bobby Vinton performance).  Scorsese’s view of the mafia isn’t romanticized to the point where the viewer loses touch with the main characters' carefree world of playing games, entertaining new girlfriends, and spending limitless amounts of money every night.

Further, the mafia family's initial introduction is done with dark humor and a good dose of satire.  As Karen Hill observes on her wedding day, “There must have been two dozen “Peters” and “Pauls” at the wedding, plus they were all married to women named “Marie” and they named all their daughters “Marie”.  This approach makes characters like lead gangster Pauly Cicero and Henry’s stereotypically Jewish mother-in-law (played briefly, but memorably by Suzanne Shepherd) easily likable.  Even young Henry Hill himself (Christopher Serrone) somehow charms viewers with his smiling demeanor and youthful enthusiasm, as he deals with stolen merchandise and blows up cars on command. Soon, however, the shocking brutality of the gangster lifestyle reminds us just how amoral most of these people are, especially when longtime friends and acquaintances are “whacked” systematically.

Other highlights of this movie include the classic and largely improvised “how am I funny?” exchange between Pesci’s and Liotta’s characters, along with verbal confrontation between made-man Billy Batts (Frank Vincent) and “Spitshine Tommy.”  Scenes where Tommy laments the ethnic discrimination by a “Jew broad” he’s “trying to bang” while later criticizing a different girlfriend for her expressed admiration for Sammy Davis, Jr. illustrate the frank complexity of these characters.  And of course, the montage of killings which occur after the successful "Lufthansa heist" (which is never shown, but merely discussed) set to the tune of Derek and the Dominos's “Layla (Piano Exit)” playing prominently on the soundtrack, and while Liotta provides an expository narration of the meaning of "goodfella," is undoubtedly one of the most affecting scenes in film history.  Yet as repulsive as those images of death are, they still aren’t as shocking as the execution which happens afterwards.

Following those pivotal moments, the movie suddenly switches tempo to one of frenetic paranoia as Henry Hill grows more out-of-control conducting “business” in a drug-induced state.  The jarring cuts of Henry speeding off from one place to another, scanning the skies for helicopters, stirring sauce and preparing cutlets for a big family dinner, then packaging drugs for transport and eventually getting arrested right outside his door create a final act which is both exhilarating and exhausting.  To paraphrase Karen Hill, “by the time I finished the movie, I thought I was drunk!”

Warner Home Video brings Martin Scorsese's 'Goodfellas' to 4K Ultra HD Blu-ray as a three-disc combo pack with a flyer for an UltraViolet Digital Copy and glossy slipcover. At the moment, we are unable to verify the size of the content, but the triple-layered UHD100 disc sits comfortably opposite a pair of Region Free Blu-ray discs atop one another. The first BD50 disc contains the movie itself while the second BD25 carries the same set of supplements from the 25th Anniversary release. At startup, the disc goes straight to a static menu with options along the bottom.

The Scorsese masterpiece flaunts its stuff with a strong HEVC H.265 encode in HDR10 made from the same 4K remaster of the original elements used for last year's 25th Anniversary Blu-ray. Although the results don't quite compare to other Ultra HD releases, the presentation showcases several notable improvements though the upgrade is pretty minor and subtle.

First thing to take note of is the fact the movie has never been much of a looker to begin with. Michael Ballhaus's cinematography has always been on the flat side with a somewhat controlled, slightly toned down palette. Primaries are accurately rendered, especially reds and blues, but they're not much brighter or vibrant than what's seen on the Blu-ray. Earth tones, yellows and browns are more natural looking and a bit bolder than before while the few splatters of magentas, purples, pinks and golds are more colorful, giving the gaudy 1970s clothing, furniture and kitschy décor a true-to-life glow.

Presented in its original 1.85:1 aspect ratio, the 2160p video displays average contrast, but whites and specular highlights are a tad more intense, giving various pieces of metal, like the guns and chrome trims of cars, a realistic dazzling glow. Brightness levels are a tad richer with appreciable gradational differences, but overall, blacks are pretty lackluster, seeming mostly flat with less than satisfying shadow delineation.

Like the Blu-ray, however, the video arrives with more misses than hits. Granted, the picture is slightly sharper beneath a nice layer of visible grain with more visible details and textures in the groovy clothing and furniture. Several sequences are softer than others and sadly, facial complexions appear mostly pale and sickly. In the end, the 4K presentation is a nice but slight improvement over its BD counterpart, but it's not the dramatic night and day differences.

The same DTS-HD Master Audio soundtrack from the 25th Anniversary is repurposed for this Ultra HD version, offering a fantastic upgrade from previous home video editions. Although the original design is not the sort to demo one's sound system, it nonetheless benefits tremendously from the jump into high-rez audio, blowing past legacy Dolby codecs away.

Remaining faithful to the original source, the largely stereo presentation feels broad and surprisingly spacious with convincing off-screen effects and fluid, well-balanced channel separation. A few atmospherics subtly bleed into the rears, nicely expanding the soundfield, but the majority is retained across all three-channels, giving the film a warm, welcoming presence with excellent fidelity. The mid-range is extensive with lots of clarity and details in the upper frequencies and distinct, lifelike acoustics throughout. This is most evident and appreciated during the many song selections, spreading evenly across the soundstage and creating an immersive wall of sound. Low bass doesn't offer much or standout in any particular way, but adequate for its age during action sequences while still providing a palpable beat to the songs. Dialogue and the back-and-forth banter between characters is crystal clear and prioritized, making this lossless version of a great soundtrack an awesome listen on Ultra HD.

The only items missing from this UHD edition of the classic film is the 36-page book and the letter from the director. Otherwise, the same supplements are ported over.

'Goodfellas' is arguably Martin Scorsese's most influential film and regarded by many as his masterpiece. Whatever the sentiments, there is no denying this is one of the most brutal, unabashed, and raw examinations of the gangster lifestyle, and it's all thanks to the fact that it is based on the real life of Henry Hill and his connections to the Lucchese family.

For this Ultra HD Blu-ray edition of the film, Warner Home Video delivers a strong 4K video presentation, but unfortunately, it also doesn't offer much of an upgrade over its Blu-ray counterpart, in spite of delivering an otherwise satisfying picture quality. On the plus side, the audio presentation makes for a great upgrade, but it's also repackaged with the same collection of supplements as the two-disc Anniversary Edition from last year, making the overall package recommended for fans and early adopters.

Sale Price 48.77
Buy Now
3rd Party 48.77
In Stock.
See what people are saying about this story or others
See Comments in Forum
Previous Next
Pre-Orders
Tomorrow's latest releases