A teenager finds himself transported to an island where he must help protect a group of orphans with special powers from creatures out to destroy them.

'Miss Peregrine's Home for Peculiar Children' is a strange and curiously exceptional film indeed. And not necessarily in a way that makes for wholly enjoyable entertainment. Granted, the children alluded to in the title are adorably odd, offbeat little nippers, which makes for the occasional amusement and delightfully whimsical visuals. However, they are not particularly interesting enough to sustain a two hour movie featuring an orphanage for kids with uniquely freakish abnormalities. Perhaps missing from this special school of gifted children is a kindly bald professor on a wheelchair teaching them how to use their talents wisely. Instead, it's run by a stringent headmistress who can transform into a peregrine falcon — hence, her name — and disguised as the exceptionally beautiful Eva Green. But that devilishly sexy smile beneath the puff of smoke from a pipe announces she's not as strict and severe as we're led to believe. Rather, she is the deeply caring motherly type protecting the children from harm.

Naturally, we have to wonder why these kids need protection, given they supposedly possess talents they could use to their advantage. Problem is they're not of the superhero-making type. The children are simply odd. Emma Bloom (Ella Purnell) wears lead boots to keep her from floating away, leading to a cute scene for her love-interest to pull her along on a rope like a balloon. Enoch (Finlay MacMillan) is a morbid teen who can reanimate the dead as well as lifeless objects, and Bronwyn Bruntley (Pixie Davies) is an adorable tyke with super strength while the pyrokinetic Olive (Lauren McCrostie) wears flame-retardant gloves for everyone's protection. The other kids are invisible boy Millard (Cameron King), plant-lover Fiona (Georgia Pemberton), beehive Hugh (Milo Parker), prophetic dreamer Horace (Hayden Keeler-Stone) and Claire (Raffiella Chapman), who hides a sharp-toothed mouth beneath thick, blonde locks. There is also the masked twins (Joseph and Thomas Odwell) with a power that basically could have resolved things sooner and avoided a needlessly tacked on battle against the baddies. 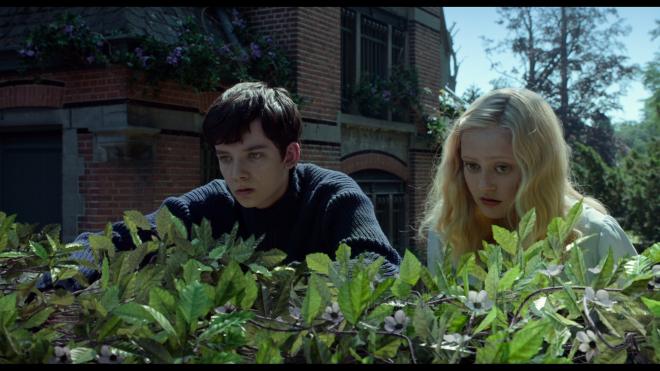 The possibilities seem limitless for establishing a larger fantasy world based on Ransom Riggs's novel of the same name once Jake (Asa Butterfield) discovers their school in Cairnholm, Wales. Inspired by his grandfather's (Terence Stamp) bedtime tales of the kids at the orphanage and battling monsters, Jake searches for answers to the man's mysterious death. Quickly, we learn along with the bewildered boy who may or may not possess a particularity of his own that this world is far more complicated to fit into a single film. At the same time, given the amount of changes made to Riggs's original story, Tim Burton and company might have intended this to be a self-contained, standalone feature. This normally wouldn't be a drawback if Jane Goldman's script didn't also feel as though jam-packing a great deal of history and lore into 127 minutes. When audiences are hurriedly told of Mr. Barron (Samuel L. Jackson), a shapeshifting peculiar who hunts other peculiars, and how time-loops work, we are left feeling exhausted trying to keep up, racing to a climactic battle where everyone's abilities are finally put to beneficial use.

Ultimately, the real problem with 'Miss Peregrine's Home' is that it doesn't feel like a Tim Burton production, which is not say all his films should be limited to gothic atmospheres and dark, somber characters played by Johnny Depp. Only that considering Riggs's imaginative plot and the characters inhabiting this otherwise delightfully kooky fantasy, the story is practically tailor-made for his particular brand and style — or rather, it fits perfectly with his "peculiar" talents. There is little of that classic Burtonesque quality or sense of wonderment to be found anywhere, and it's somewhat frustrating watching a house full of endearingly strange children draw a mild curiosity while Butterfield's Jake maddeningly delays the leadership role he obviously was designed for. Indeed, it's quite unfortunate in a film where a villainous, gray-haired Jackson allowed to chew the scenery in ghostly pale eyes and a razor-sharp smile is more interesting than the leads. The better for him to kidnap these eccentric kids with peculiar abilities and dine on their eyeballs by a candlelit dinner with other such monstrous friends, but our eyes remain intact burned with the memory of a disappointingly boring Tim Burton production.

20th Century Fox Home Entertainment brings 'Miss Peregrine's Home for Peculiar Children' to Ultra HD Blu-ray as a two-disc combo pack with a flyer for a Digital HD Copy. At the moment, we are unable to verify if the correct size of the content, but the dual-layered UHD66 disc sits comfortably opposite a Region Free, BD50 disc inside a black, eco-cutout case with a glossy slipcover. At startup, the UHD goes straight to an interactive menu with full-motion clips and music.

Miss Peregrine welcomes Ultra HD Blu-ray into her home with a gorgeous and stunning HEVC H.265 encode in HDR10, making it a marked improvement over its Blu-ray counterpart. The movie was originally shot on the Arri Alexa XT Plus camera system, which per the manufacture shoots natively at 3.2K resolution at Rec.709, and the elements were later mastered into a 4K digital intermediate. The freshly-minted, digital-to-digital transfer shows extraordinarily sharp, detailed lines along the furniture, Miss Peregrine's Victorian home and the surrounding foliage. Viewers can plainly make out the threading in the intricate clothing of both the children and Miss Peregrine, and individual leaves of trees are razor-sharp and pointed. Striking lifelike textures reveal the tiniest scar, wrinkle and blemish in the natural, appropriate facial complexions.

Presented in its original 1.85:1 aspect ratio, the beauty and splendor Bruno Delbonnel's beautiful cinematography displays outstanding, pitch-perfect contrast with brilliant specular highlights that show fantastic variation in every frame. While sequences in modern day Wales appear all the more gray and overcast, other daylight sequences are brighter, more vibrant and simply radiant. Whites pop off the screen with brilliant luminosity, sunshine sparkles with dazzling luminosity off water and through pieces of glass, and specular highlights provide an enthusiastic, true-to-life glow in the fluffy clouds and along the edges of random metallic objects. Brightness levels are extraordinarily dynamic with precise gradations in the grayscale, delivering pitch-black shadows that never obscure the finer details in the darkest portions. The image often has an appreciable 3D-like quality and several looking through a window moments.

With several jaw-dropping scenes to seduce those still sitting on the fence, the delightfully picturesque 4K presentation comes with lots of warm secondary hues, giving everyone in the cast a natural, rosy complexion. There are also several scenes showered with a lovely array of soft pinks, hints of magenta and light purples in the late afternoon for realism, and energetic oranges making the Luftwaffe raid during a lightning storm all the more intense. Primaries definitely benefits the most from the jump to UHD, showcasing animated greens in the home's lush garden, bright glossy reds in the lips of various characters and vivid blues in the heavens. The blue streaks in Miss Peregrine's hair are more noticeable and distinct, and Olive's red hair appears more realistic here than on the Blu-ray, making the 2160p video marvelous to look at.

Miss Peregrine and her children flaunt their particular abilities with a terrifically enjoyable Dolby Atmos soundtrack, which is exclusive to the format and defaults to Dolby TrueHD 7.1 for those not equipped for the codec.

On the whole, the design makes great use of the object-based format in the front heights. For much of the movie's runtime, the overhead speakers are not given much of a workout, which is not to imply they are not used or don't impress from time to time. A handful of scenes come with subtle ambient noises occupying the space above the listening area, such the wildlife of Cairnholm Island, the seagulls at Blackpool or the wind blowing from the ocean. The noise of the kids playing throughout the house echo all around with excellent directionality The surround speakers are employed more often as the fights with the "Hollowgasts" reveal flawless panning effects while debris scatters above and lands into the sides and rears, creating a fantastically satisfying and occasionally immersive soundfield. A genuine highlight are the Luftwaffe raid scenes as planes fly above and the noise of explosions are heard in the distance.

With a terrifically engaging and broad soundstage thanks to Mike Higham and Matthew Margeson's whimsical score, the design widens the screen with exceptional background sounds and convincing off-screen activity, generating a wide and spacious soundstage. The mid-range is highly detailed with appreciable warmth and fidelity, separating every instrument and musical note within the orchestration. Action sequences benefit from smallest piece of debris discretely heard and raining down from the front height channels. Again, scenes with the "Hollowgasts" create an impressive wall of sound while the low-end adds a hearty presence and authority to each tentacle stomp, and the explosions and lightning rumbles across the room. All the while, vocals remains distinct and intelligible in the center of the screen.

'Miss Peregrine's Home for Peculiar Children' arrives with the visual flare we'd expect from Tim Burton but lacking that classic Burtonesque touch and sense of wonderment that would perfectly suit the material. It's unfortunate that in a house full of endearingly strange children, the best the film can barely muster a mild curiosity and disappointingly dull. The Ultra HD Blu-ray arrives with a gorgeous, reference-quality 4K video presentation while also receiving a nice upgrade with a fantastic Dolby Atmos audio presentation. Offering the same collection of supplements, the overall package is worth checking out for fans and early adopters.