Louis C.K., Eric Stonestreet, and Kevin Hart lend their voice talents to this action/adventure comedy taking a hilarious look into the lives of Pets. Set in a Manhattan apartment building, pets gather to start their day as the two-legged residents head for work and school. The head hound is a quick-witted terrier rescue, whose position at the epicenter of his master's universe is suddenly threatened when she comes home with Duke, a sloppy mongrel with no polish. The two soon find themselves on the mean streets of New York, where they meet the adorable white bunny Snowball. It turns out that Snowball is the leader of an army of pets that were abandoned and are determined to get back at humanity and every owner-loving pet. The dogs must thwart this plot and make it back in time for dinner.

It's entirely possible – likely even – that the brains behind the 'Despicable Me' franchise didn't set out to create a 'Toy Story' clone, but that's essentially what happened with 'The Secret Life of Pets.' It's not only the premise (what do animals do when people aren't around?) that mirrors the secret sentient toy idea, but it's the entire structure of the plot. 'The Secret Life of Pets' is virtually the Woody and Buzz tale in dog form.

Max (Louis C.K.) is a happy dog. He reveres his owner Katie (Ellie Kemper). They get along great. They do everything together. Then, one day it all changes. Max's idyllic life is upended by a new house guest. Katie brings home a rescue from the pound. A large hairy dog named Duke (Eric Stonestreet). Max feels threatened by Katie's new pet, becomes jealous…and stop me if you've heard this before.

A remix of the same basic plot for 'Toy Story' wouldn't be that big of a deal if 'The Secret Life of Pets' had anything new to add. Sadly, this movie, which is overrun with forgettable characters, never harnesses even the slightest hint of 'Toy Story'-esque emotion.

The whole relationship between Max and Duke never approaches genuine feeling. Instead it relies on predictable dramatic beats to keep it going. Even then the conflict between the two never feels all that terribly important to begin with. Subsequently, this provides for less than satisfying conflict resolution. 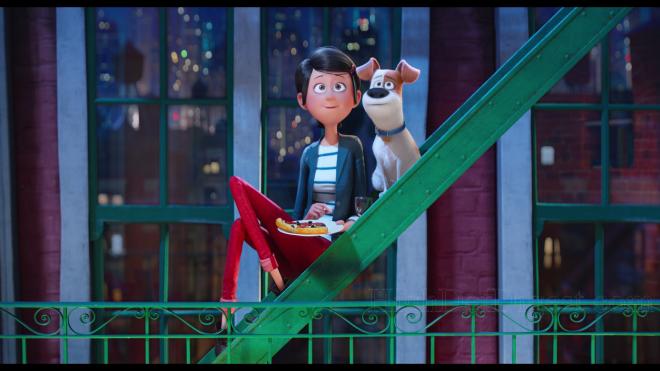 At one point during their misadventures Max and Duke meet a homicidal bunny who fantasizes about a world in which pets kill their owners. The bunny, who is ironically given the cute name of Snowball (Kevin Hart) leads a band of unwanted pets on a crusade against humankind. Snowball curiously looks exactly like the bunny from Pixar's short film 'Presto.' Another coincidence, I'm sure. The problem with Snowball though, is that he isn't given any nuance to make him interesting. It's simply supposed to be funny that he's cute and fluffy and also wants to kill everyone. Kind of like that old visual gag where the biggest, scariest guy in the gang is named Tiny. Ha, ha, right?

Perhaps the most disappointing thing about 'The Secret Life of Pets' is that it attempts to tell a straightforward story. It would've almost been better off continuing on the same route the movie's marketing took and strung together various vignettes of jokes about pets at home alone.  Like a modernized version of Aardman Animation's 'Creature Comforts' series. At least then the filmmakers wouldn't feel tied down to a recognizable story structure.

Every one of the funny pet-home-alone asides we do get to see have already been played ad nauseam on the trailers. None of them are new and witty, so instantly the movie's best jokes are old.

Like 'Minions,' 'The Secret Life of Pets' thinks it can coast by on superficiality. This might be something that passes by the younger crowd – although to be fair many of the kids in my screening appeared bored and restless – but, it'll likely bum out other viewers.

Universal Studios Home Entertainment brings 'The Secret Life of Pets' to 4K Ultra HD Blu-ray as as a two-disc combo pack with a flyer for a Digital HD Copy. At the moment, we are unable to verify if the correct size of the content, but the dual-layered UHD66 disc sits comfortably opposite a Region Free, BD50 disc inside a black, eco-cutout case with a glossy slipcover. At startup, the disc goes straight to an interactive menu screen with full-motion clips and music playing in the background.

The pets fly the coop and discover the real world with a magnificent, tell-all HEVC H.265 encode in HDR10, delivering a sumptuous, vibrant feast for the eyes. The opening aerial shots of New York City dazzle the screen with luxurious splendor. Throughout, the 4K presentation shines with vivid, richly-saturated primaries while secondary pastel hues energize each scene with a bouncy, lighthearted humor, even when the story is at its gloomiest. Yellows and oranges are true-to-life and impressive, giving the early fall climate an amazing glow and radiance.

The Ultra-HD transfer also comes with pitch-perfect, spot-on contrast. Brilliant specular highlights and whites not only provide fluffy clouds an amazing, realistic glow but also show dramatic variation in the coats of Max, Snowball and Gidget. The top of the ripples in the waves of the Hudson River, in particular, gleam and sparkle with astonishing verisimilitude while the metal of pipes and sign posts realistically glisten in the light. The animation shines with inky-rich blacks showing splendid, clear differences between the various shades, revealing every nook and cranny inside Snowball's underground sewer lair.

Presented in its original 1.85:1 aspect ratio, the video is simply jaw-dropping and crystal clear.  Every frame shows razor-sharp lines in the individual blades of grass and in each leaf of trees while the tiniest pockmark and crack along the sidewalk and buildings are distinctly visible. The hairs of every fluffy furry dog and the feathers of birds show the most trivial detail and nuance, giving each animal an incredible sense of realism. Arguably, most shocking is seeing the subtle particularities, bumps and blemishes on the noses of dogs and the beaks of birds. Overall, this is a stunning and gorgeous film to enjoy on Ultra-HD Blu-ray.

As Aaron already pointed out in his review, the Dolby Atmos soundtrack accompanying the animated film offers a great listen, but it doesn't quite compare to some of the best out there.

Nevertheless, the design arrives with excellent directionality, as various atmospherics move from speaker to speaker with flawless panning. On various occasions, the room fills with the hustle and bustle noise of the city in the distance while other, more intimate moments are layered with the subtle effects of local wildlife and other people, such as the scene in the dog park.

Many of those same sounds periodically move into the ceiling speakers, creating a cool half-dome effect, especially when the action erupts on screen. One of the more memorable scenes takes place inside Snowball sewer lair with the voices of other animals echoing all around. But the best moment by far is when Max and Duke are confronted by the scary alley cats. Their hissing and menacing meows occupy the entire space above the listener.

But as is often the case with animated films and Atmos tracks, a majority of the action takes place in the front soundstage, spreading into the height channels with convincing off-screen effects. Imaging is broad and spacious with an extensive and richly detailed mid-range, generating an effectively engaging wall of sound that’s continuous. Though not earth-shattering, low bass is palpable and adequate, providing the action and music with appreciable weight and presence. Vocals are pristine and well-prioritized, making for a great listen on UHD.

The animation of Universal's 'The Secret Life of Pets' is stunning and a feast for the eyes, but unfortunately, that's enough to make up for a rather pedestrian and unexceptional plot. Still, it makes for lighthearted, undemanding entertainment for the whole family with several funny moments sprinkled throughout. The Ultra HD Blu-ray arrives with gorgeous reference-quality 4k video and an excellent audio presentation. making this UHD version the best way to watch and enjoy the animated family film. Although the supplements are disappointingly light, the UHD package is recommended for early adopters and the curious.

Sale Price 13.99
List Price 22.98
Buy Now
3rd Party 13.99
In Stock.
See what people are saying about this story or others
See Comments in Forum
Previous Next
Pre-Orders
Tomorrow's latest releases