As the war of Panem escalates to the destruction of other districts, Katniss Everdeen, the reluctant leader of the rebellion, must bring together an army against President Snow, while all she holds dear hangs in the balance.

The war-torn images of 'Hunger Games: Mockingjay – Part 2' are sobering and familiar. This film, perhaps more than any of the other movies in the series, takes on the real collateral damage of war. Given current events, the final installment of the 'Hunger Games' franchise acts as a dystopian mirror on which to project our own self-destructive actions as human beings.

The third movie – 'Mockingjay - Part 1' – dove into how media can manipulate the masses in times of war. How propaganda is a strong, unifying tool for good and evil. Now the troops are unified, and the stakes are raised. The first part was the precursor to war, the second part is the war.

Little interest is held in the love triangle that Katniss (Jennifer Lawrence) finds herself embroiled in with Gale (Liam Hemsworth) and Peeta (Josh Hutcherson). It's probably the most uninteresting aspect of the entire story. Thankfully, the movie spends a limited amount of time focused on Katniss's waffling on which beau to pick. Instead it's laser-focused on the toll of war.

It's impossible not to see numerous parallels between current events and the events happening here. 'Part 2' accurately, and at times brutally, shows the devastating effects of urban siege warfare. We begin with the war. The rebels, led by President Coin (Julianne Moore) are gearing up to move into the Capitol for the final push on President Snow's (Donald Sutherland) troops. As they do, the Capitol civilians are caught in the middle of merciless fighting. 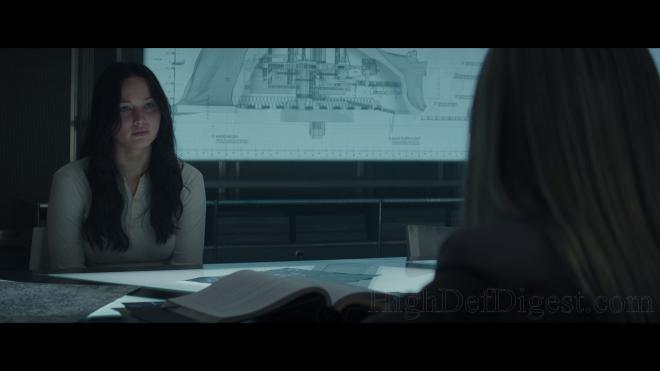 Huddled groups of civilians fleeing the fighting and being caught in the crossfire is something it seems we're seeing nightly on the news. The movie doesn't shy away from the enormous cost of war. Sure, Coin's campaign to overthrow the tyrant Snow seems just, but do the ends justify the means? Are we willing to sacrifice innocent people – children! – for the greater good, so to speak? Do we give into xenophobia? Do we allow ourselves to be manipulated by it, or do we rise above such prejudices? These are the questions 'Part 2' seeks to answer. Well, maybe it's better explained that these are the questions the movie asks, and it's up to us to answer them.

The philosophical and topical underpinnings of 'Part 2' are its main virtue. Yet, it doesn't sit around pontificating forever either. There are some very well thought out, well-shot action scenes that put the earlier shaky-cam-filmed 'Hunger Games' movies to shame. There's a tunnel sequence that is every bit as suspenseful as any horror movie. The timing is spot on and the action is decipherable. Two things that the first two movies struggled with.

Lawrence continues to be the highlight as far as acting goes, but I'd be remiss if I didn't mention the fact that this is the last time we'll be seeing a new Philip Seymour Hoffman performance. It's a realization that isn't easy to shake while watching.

Once the end rolls around, 'Part 2' suffers a bit from end-of-the-franchise fatigue. The screenplay seems unable to let go of its characters, drawing out the end for ages. Much like 'Lord of the Rings: Return of the King,' 'Part 2' has at least half a dozen spots where it could end, but doesn't.

Those quibbles are small though, because at the end it's still hard to shake some of the imagery we've been presented with. Visual depictions of violence that are frighteningly similar to what we see on the nightly news. On the surface it might be easy to detach oneself from it because it's a fictional tale about a dystopian future. While that may be the case, there's no denying that 'Mockingjay – Part 2' hits close to home in more ways than one.

Lionsgate Home Entertainment brings 'The Hunger Games: Mockingjay Part 2' to 4K Ultra HD Blu-ray as a two-disc combo pack with a flyer for a Digital HD Copy. At the moment, we are unable to verify the correct size of the content, but the triple-layered UHD100 disc sits comfortably opposite a Region A locked, BD50 disc inside a black, eco-elite case with a glossy slipcover. At startup, the disc goes straight to the main menu with full-motion clips and music.

The rebels take the Capitol armed with a fantastically beautiful HEVC H.265 encode in HDR10, offering a worthy upgrade over its Blu-ray counterpart.

Like its 'Mockingjay' brethren, the movie was filmed on the Arri Alexa XT camera system, which shoots natively at 3.2K resolution, and the elements were later mastered into a 4K digital intermediate. As before, there are several instances of aliasing along the edges of some windows, computer monitors and some of the fluorescent light fixtures of District 13. It's not an outrageous offence to ruin its enjoyment, but it's a glaring enough occurrence to almost distract a few times. The rest of the picture, on the other hand, is stunning with remarkable definition and clarity in the soldier's clothing, the rumble of the buildings and the antique furniture inside Snow's house. The fine lines in the lettering of posters and holograms are detailed, and the faces of the cast expose every wrinkle, pore and the tiniest smudge.

Although there are some very minor instances of blooming, overall contrast is very well-balanced and consistent with brilliant, crisp whites throughout. The 4K presentation also arrives with outstanding specular highlights in the metal of weapons, the edges of buildings and along the scattered clouds against a bright blue sky, providing the 2160p video with dramatic realism. Black levels are richer and noticeably more varied without sacrificing any of the finer details in the deepest, strongest shadows, giving the 2.40:1 image an attractive cinematic appeal and welcomed depth. A tad brighter and more accurate color palette energizes the screen with glowing greens in the foliage and the crimson reds of blood while missiles show true-to-life yellows and flesh tones come with rosy, lifelike hues.

The same lossless audio mix from the previous Blu-ray has been ported over for this Ultra HD version, and Aaron wrote a spot-on review of that presentation, which I'll simply repeat here.

'Mockingjay – Part 2' really shines here. The Dolby Atmos (Dolby TrueHD 7.1 core) track provided is something special. There is some immersive sound design going on here. It may not be as enveloping as some of the other action-based Atmos titles, but it's nonetheless impressive.

The sound design makes use of the height channels as rebel aircraft fly overhead panning seamlessly from back to front. When the rebels bomb the Capitol's mountain base the sound is specifically contained in up and to the left with the bombs drop. We can barely see it happening on screen, as Katniss laments it, but we can hear it with pinpoint precision.

Other scenes that offer wonderful examples of Atmos' object-based sound design include the moment when the characters are locked inside the courtyard that is quickly filling with mysterious oil, and the fight in the sewers with the albino zombie creatures. As the oil pours in among the buildings its gurgling and splashing can be heard everywhere from every channel. It's quite impressive. When the team fights zombies in the sewers growling, gunshots, and explosions are going of simultaneously around you. Snarling creatures seemingly fly over your head as they launch themselves through the air.

Another aspect of this audio mix that is particularly satisfying is its use of echoes. Whether it's in the sewers or a someone speaking to a large army, the echoes are seamlessly transported through the surround channels making you feel like you're right there.

Dialogue is always clear. The soundtrack is piped through all the channels with gusto. The scene at the end when the drums are beating as Katniss walks to execute President Snow is a phenomenal example of how omnipresent this mix can really be. Not to mention it's a powerhouse moment for the LFE. For all intents and purposes this is demo material for your Atmos setup.

The best dystopia YA adaptation finally comes to a close with a strong and satisfying conclusion in 'The Hunger Games: Mockingjay – Part 2.' The Ultra HD Blu-ray shows an excellent 4K video presentation with several noteworthy moments, offering a nice upgrade over its Blu-ray counterpart. On the plus side, the reference-quality Dolby Atmos soundtrack is an outstanding and splendid listen. The whole thing is accompanied by a same collection of supplements, making the overall package recommended for early adopters and loyal fans.

Sale Price 14.79
List Price 42.99
Buy Now
3rd Party 9.19
In Stock.
See what people are saying about this story or others
See Comments in Forum
Previous Next
Pre-Orders
Tomorrow's latest releases