Katniss Everdeen is in District 13 after she shatters the games forever. Under the leadership of President Coin and the advice of her trusted friends, Katniss spreads her wings as she fights to save Peeta and a nation moved by her courage.

The first two 'Hunger Games' movies were dutifully focused on the gladiator-like carnage taking place inside the Hunger Games dome. We've moved on from that, to a smarter, more satisfying storyline. 'Mockingjay – Part 1' throws us head first into the frothing grassroots revolution of Panem. The oppressive inhabitants of the districts are primed to rise up and overthrow President Snow (Donald Sutherland) and his cronies, all they need is a little encouragement. That encouragement comes in the form of Katniss Everdeen (Jennifer Lawrence). She's the face of the rebellion. A mutiny fueled by slick media-produced propaganda pieces. The war of television airwaves for the control of the populace's collective mind is something that 'Mockingjay – Part 1' does really well.

As the face of the revolution Katniss, a refreshingly humanistic heroine, is asked to put the people on her back. After her courageous showings in the Hunger Games she's seen as an ideal candidate that the population of Panem can rally behind. Plutarch Heavensbee (Philip Seymour Hoffman) and President Alma Coin (Julianne Moore) become her puppet masters. Most of the time they appear utterly unsympathetic towards her individual needs. They're uncaring bureaucrats who happen to not be President Snow. So, they're a safer option Katniss supposes. While in reality Katniss is being batted around like a cat's ball of yarn. Sure, the revolution of Panem seems a righteous undertaking, but taking advantage of a vulnerable young girl begs the question if the ends justify the means. Certainly the ethics of Heavensbee and Coin are murky, at best.

The two of them meticulously plan Katniss' every move. It's like watching a demented dystopian behind-the-scenes political campaign. Everything about Katniss is fabricated. She's dressed like a superhero. She's asked to gaze over the Capitol's destruction of District 12 and emotionally convey her thoughts. It's no wonder she's unable to function most of the time. What's interesting about Katniss and her place within the story, is that she isn't made out to be superhuman. She's susceptible, emotional, and even irrational at times. She's – gasp – human. What a novel concept. 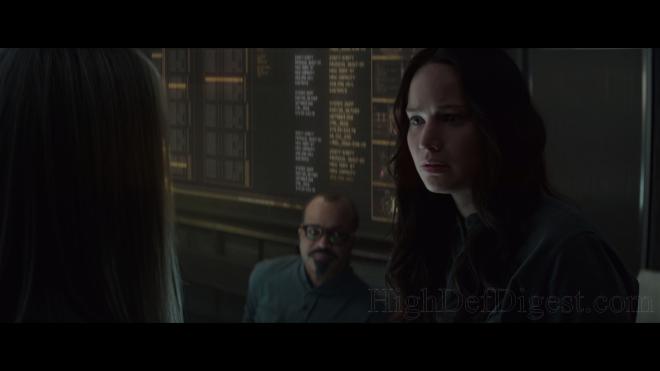 Without giving any thought to organically grown heroes. The ones who are born from legends of bravery and victory, Heavensbee and Coin rush to manufacture a hero themselves. There's no time to wait. Just like the Capitol's attempts at scaring the population into obedience, the rebellion's message is every bit an illusion. A slight-of-hand, meant to rile people up. To strike their nerves. To get them to act. Quickly.

Now take everything I said about Katniss and apply the opposite to the people of Panem. They're so pathetic, and easily controlled. It's hard to have sympathy for any of them. They're all so willing to run into certain death while whistling Mockingjay calls and signing the latest rebellion approved Katniss song, that they fail to realize there are going to be mass casualties. They all act like well-intentioned zombies, ever-ready to be blown to smithereens if it means doing so in the name of Katniss.

Contrast the population of Panem to the oppressed people in 'V for Vendetta' and we can see that they never really go through an evolution to revolution. I suppose one could argue that the residents of Panem have been so beaten down, that their identities have been completely stripped from them. The only problem with that theory is that the individuals the story chooses to follow are certainly extremely individualistic minds.

With less action and more talking, Lawrence is asked to do a lot more "acting" here. She's great. There are so many times where the emotional outbursts could border on the obscene, but Lawrence does a great job toeing the line between great acting and over acting.

The "Part 1" in the title should be an unmistakable clue that this only represents half a story. It doesn't diminish the effectiveness of the tale, however. While it feels needlessly cliffhanger-y, 'The Hunger Games: Mocking Jay – Part 1' is every bit as good – if not better – than its predecessors.

Lionsgate Home Entertainment brings 'The Hunger Games: Mockingjay Part 1' to 4K Ultra HD Blu-ray as a two-disc combo pack with a flyer for a Digital HD Copy. At the moment, we are unable to verify the correct size of the content, but the triple-layered UHD100 disc sits comfortably opposite a Region A locked, BD50 disc inside a black, eco-elite case with a glossy slipcover. At startup, the disc goes straight to the main menu with full-motion clips and music.

The revolution begins on Ultra HD Blu-ray with a beautiful HEVC H.265 encode in HDR10, though a handful of sequences are sure to give viewers pause. The movie was originally shot on the Arri Alexa XT Plus camera system, which per manufactures shoots natively at 3.2K resolution at Rec.709, and the elements were later mastered into a 4K digital intermediate. On occasion, the 2.40:1 image comes with several instances of aliasing on the sharpest edges of a few objects, particularly around fluorescent light fixtures and along a couple monitor screens. Thankfully, such artifacts are not a regular occurrence, and the rest of the picture is often astonishing, revealing the most minute detail during the many daylight sequences. Fine lines along the debris and large chunks of concrete from abandoned, collapsed buildings are distinct while the faces of actors appear healthy with revealing, lifelike textures.

Overall, the 2160p video is significantly brighter, offering greater visibility in the distance and making the distilled teal-and-orange color scheme more apparent. Spot-on contrast delivers pitch-perfect, immaculate whites, which can be seen in the light fixtures, the hair of President Snow and in various clothing items. Shining specular highlights show distinct differences in the clouds while metallic weapons glisten in the sun with pleasing realism. Blacks are much deeper and opaque, oozing off the screen with incredible inky richness. However, the darkest portions of the screen inside District 13 tend to engulf some of the finer details and there isn't a great deal of variation between the various shades. Colors are a bit brighter here than the Blu-ray, providing more accurate, lifelike hues in the flesh tones. On the other hand, primaries, especially the greens in the foliage and the bright blue sky, are very intense and pulsating, making for an excellent UHD and offering a step-up over the Blu-ray.

The mockingjay sings its rebellious tune on Ultra HD with an excellent, near-reference Dolby Atmos soundtrack that'll fill the room with excitement and suspense. As heard on its Blu-ray counterpart and which Aaron rightly pointed out, for a good chunk of the runtime, the surround sound use is bit more selective with many noticeable pockets of silence.

However, the dialogue-driven movie comes with several satisfying, room-filling sequences that sucks the listener right into the middle of the action. For example, the bombing of District 8 has hovercrafts flying overhead and debris from explosions moving through the ceiling and the sides while convincingly landing in the back. The alarms sounding during the District 13 air raid are layered with the female voice giving instructions above the listening area, and the bombs striking reveal excellent directional cues that flawlessly pan from one speaker to the next. Quieter moments come with ambient effects that subtly spread overhead, like District 13 crowds cheering, fires burning all around or the echo of voices resonating with realism. On the whole, the design makes for an immersive and engaging dome-like soundfield.

The rest of the design is a front-heavy mix, generating a wide and spacious soundstage displaying excellent warmth and fidelity. Littered with lots of background activity, imaging exhibits superb distinction in the mid-range and outstanding separation with fluid movement across all three channels and off-screen effects convincingly move into the front heights. James Newton Howard's score not only displays clean distinction in the instrumentation, but it nicely bleeds into the overheads. Most impressive is a surprisingly authoritative and strikingly powerful low-end that gives every explosion and action sequence an awesome palpable weight. And amid all the mayhem of revolution, vocals remain precise and well-prioritized in the center.

The third installment in the 'The Hunger Games' saga is arguably one of the more satisfying entries in the franchise. With splendid performances from the entire cast, Katniss awakes from her battle in the last sequel to discover the influential power of media and propaganda to inspire the masses. The Ultra HD Blu-ray shows an excellent 4K video presentation with several noteworthy moments and an outstanding Dolby Atmos audio presentation. The same collection of supplements makes the overall package recommended for early adopters and loyal fans.

Sale Price 10.73
List Price 22.99
Buy Now
3rd Party 10.73
In Stock.
See what people are saying about this story or others
See Comments in Forum
Previous Next
Pre-Orders
Tomorrow's latest releases