Katniss Everdeen voluntarily takes her younger sister's place in the Hunger Games, a televised competition in which two teenagers from each of the twelve Districts of Panem are chosen at random to fight to the death.

Having never read the books, seeing the events of Suzanne Collins' dystopian society in which kids kill other kids in an arena while millions watch, makes me wonder how these books could be considered "young adult" fiction. There's some heavy stuff going on here. Sure, it's not as gory as a similar movie like 'Battle Royale,' but no one pretended that that book and subsequent movie were for kids. This is brutal!

Everyone knows the story of 'The Hunger Games' by now, right? Katniss Everdeen (Jennifer Lawrence) lives in a futuristic society ruled by a cruel upper-class who keep a stranglehold on the poorer people in their society by holding games every year where 24 children are chosen randomly throughout the 12 outlying districts. These kids are then put into a dome and told to kill each other. The last one standing wins. It's a cruel world Katniss lives in.

After her younger sister is picked during what is called "the reaping" Katniss volunteers herself to take her place. She's a capable archer and stands a better chance than her sister in the games.

I'd be lying if I told you that it wasn't hard to watch the first few moments after the games commence. Gary Ross' cleverly employed shaky-cam helps deaden the senses, but you still see a few blood spatters and knife thrusts as teenagers brutally murder pre-teens.

'The Hunger Games' could have easily been rushed to theaters amidst its wave of surging popularity. It did come to the screen pretty fast, but it doesn't feel rushed when you sit down and watch it. It doesn't feel like, say, 'Percy Jackson' for example, another popular young adult series, that was rushed out the door and ended up feeling more like a made-for-Disney-Channel movie than a big budget adventure. 'Hunger Games' on the other hand has that grand scope to it, and it feels like a big budget adventure. 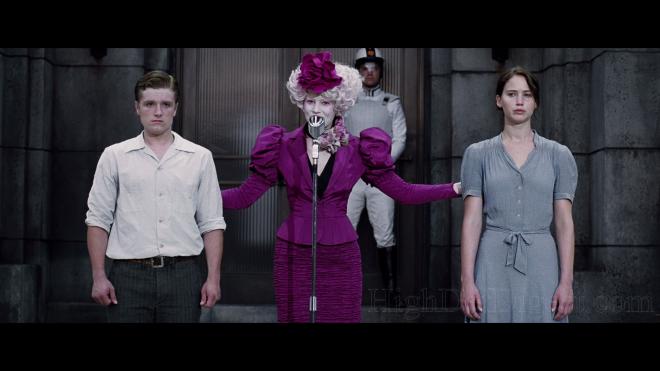 Much of that success should be laid at the feet of the outstanding cast assembled for the film. Woody Harrelson as Haymitch, a person who won the games once but now drowns his sorrows in alcohol, is just the person to play that part. Who embodies inner struggle better than Harrelson? Speaking of inspired casting, what about Stanley Tucci as the flamboyant broadcast announcer Caesar Flickerman? Then at the center of the pack you have Jennifer Lawrence, an accomplished actress who showed how well she can play this kind of hard-nosed heroine in 'Winter's Bone.'

Ross, who hasn't directed action until now, employs many of the tiresome clichés of modern day action movies. The shaky-cam here is bothersome. It's understandable why it's used, and to his credit he employs it sparingly (this isn't as bad as a Greengrass film). It's blatantly used to cover up the more intense action scenes, to simply give a semblance that bloody action is taking place. All so they could get away with a PG-13 rating. Could you imagine a young adult fiction series getting an R rating? That would be the day.

'The Hunger Games' is entertaining enough, mostly because its stellar cast really carries the movie along. The story has been seen before, as it's a mixture of 'The Running Man' and 'Lord of the Flies,' but it still holds enough excitement and "Did they really just bludgeon that kid to death?" surprises to make for a solid blockbuster adaption.

Lionsgate Home Entertainment brings 'The Hunger Games' to 4K Ultra HD Blu-ray as a two-disc combo pack with a flyer for a Digital HD Copy. At the moment, we are unable to verify the correct size of the content, but the triple-layered UHD100 disc sits comfortably opposite a Region A locked, BD50 disc inside a black, eco-elite case with a glossy slipcover. At startup, the disc goes straight to the main menu with full-motion clips and music playing in the background.

The girl on fire is given as tribute to the Ultra HD Blu-ray games with a strong and generally satisfying HEVC H.265 encode in HDR10. Although the picture quality doesn't quite compare to other releases or offer a night and day difference over its Blu-ray counterpart from a few years ago, the 4K video nonetheless boasts a nice upgrade with plenty of visible improvements.

Originally shot on 35mm film, the picture is slightly sharper with a tad better detailing and definition in the cold, concrete buildings of the Capitol and in the elaborate clothing of the characters. Once in the games, viewers can make out the unique knots and cracks along the rough surface of tree barks while individual leaves and blades of grass sway with the wind. A few sequences are softer than others, but the overall presentation, which is awash with a fine layer of natural grain, displays excellent lifelike textures in the facial complexions.

On the other hand, due to the way it was shot by Tom Stern, the stylized cinematography doesn't really allow for much improvement in the palette or show a wider color gamut. However, primaries appear a tad livelier and brighter while secondary hues are nicely saturated and provide a good deal of warmth and healthy looking skin tones. Of course, the animated outfits of Capitol's citizens are perkier and more vivid than before while the foliage is greener and the blue skies look more photorealistic.

Presented in a 2.40:1 aspect ratio, the 2160p video arrives with average contrast levels, yet specular highlights show the biggest and best improvements overall. Whites are cleaner and more intense, showing lots of appreciable variation between the fluffy clouds in the sky and Donald Sutherland's gray hair. Various pieces of metal, such Katniss's bow and other weapons, a realistic, dazzling shine. Blacks don't make a huge jump, but they are accurate and richly rendered with good delineation in the darkest shadows. The 4K presentation is not a major upgrade, but the slight improvements, all things considered, make for a strong UHD.

The games only keep getting better and more exciting thanks to an outstanding, demo-worthy Dolby Atmos soundtrack that nicely amplifies an already excellent DTS-HD track heard on Blu-ray. As with its lossless counterpart, directionality is superb with various noises filling the room to create an immersive 360° soundfield. Action sequences, of course, are most satisfying as arrows and spears whizz from the front of the room to the back and vice versa. The chatter of crowds and the cheers from the audience also spread everywhere while more dialogue-driven moments come with a realistic echoing effect which generates a great sense of space.

But most impressive — and of course, of more importance — is that sound engineers did a fantastic job in moving specific sounds into the space above the listening area without seeming forced or artificial. When the action breaks out on screen, the room also erupts with the uproar of chaos while debris distinctly flies overhead and rains down all around. The hovering ships glide through the air on several occasions, and mocking jays whistle with incredible realism above the listener with superb directionality and accuracy. Even quieter scenes inside the Games come with a variety of atmospherics in the ceiling speakers, creating a satisfying dome-like impression.

As for the rest of the track, background activity crowds the front soundstage with the busy, energetic chatter of Capitol residents and the sounds of nature and the wildlife of the forest. Imaging feels spacious and far-reaching thanks to an extensive, room-penetrating dynamic range, exhibiting detailed separation and clarity even during the loudest segments. Off-screen activity provides a convincing presence, and movement between all three channels is flawless while vocal remain precise and distinct in the center of the screen. Some of that noise, along with James Newton Howard's score, bleed into the front heights, nicely broadening the soundscape to keep viewers continuously engaged. As before, the low-end is authoritative and robust, delivering several wall-rattling moments to the explosions and the hovering ships (bass chart).

The same collection of supplements are ported over with three of those featurettes also shared on the Ultra HD Blu-ray.

Despite a couple minor flaws, 'The Hunger Games' is the first adaptation of the beloved book series on which it is based on and instantly became a box-office phenomenon, catapulting Jennifer Lawrence to super stardom. This Ultra HD Blu-ray arrives with a strong 4K video presentation, but unfortunately, it doesn't offer much of an upgrade over its Blu-ray counterpart. On the plus side, the reference-quality Dolby Atmos soundtrack is a splendid improvement over the DTS-HD track, accompanied by a small collection of supplements and one lone exclusive to the format, making the overall package worth checking out for fans and early adopters.

Sale Price 14.79
List Price 22.99
Buy Now
3rd Party 5.74
In Stock.
See what people are saying about this story or others
See Comments in Forum
Previous Next
Pre-Orders
Tomorrow's latest releases