Sausage Party, the first R-rated CG animated movie, is about one sausage leading a group of supermarket products on a quest to discover the truth about their existence and what really happens when they become chosen to leave the grocery store. The film features the vocal talents of a who's who of today's comedy stars – Seth Rogen, Kristen Wiig, Jonah Hill, Bill Hader, Michael Cera, James Franco, Danny McBride, Craig Robinson, Paul Rudd, Nick Kroll, David Krumholtz, Edward Norton, and Salma Hayek.

From the same vulgar and juvenile imagination that also gave us 'This Is the End,' 'The Interview' and 'Superbad' comes another series of crude obscenities and lewd behavior in 'Sausage Party.' A good number of moviegoers not aware of Seth Rogen and Evan Goldberg's sense of intentionally immature humor are sure to be offended, likely taken aback by it being an animated film. The green band previews notoriously played on audience's expectations, seeming like standard family fare akin to Disney/Pixar or a DreamWorks Animation production. The red band trailers, on other hand, fully disclosed the story of life in a grocery store was never meant for young viewers. But even if promotional material or this being another Rogen-Goldberg collaboration — with Jonah Hill now joining the team — were not enough in announcing the movie is for adults only, then the film's title should give some inkling to the sort of raunchiness on display for the next 90 minutes. Unless you're Drax from 'Guardians of the Galaxy' where sarcasm and insinuations go over your head, then there isn't a reason for misjudging the title's meaning as just one of thousand other lewd jokes throughout.

But even if some oblivious viewer with more modest sensibilities so happens to accidentally stumble upon this hysterical assault to civil propriety, it's only a matter of minutes before realizing 'Sausage Party' is the furthest thing from civilized or family friendly. After a comical song and dance number by the food products in Shopwell's supermarket worshipping the shoppers as gods, we're introduced to Frank (Rogen), a sausage who dreams of slipping all five inches of himself between the buns of his girlfriend Brenda (Kristen Wiig). And yes, they talk just as brazenly about consummating their relationship while waiting to be chosen by the gods for the "Great Beyond," completely unaware of the figurative meaning of their literal words. The rest of the movie is simply a laundry list of explicit, unambiguous double entendres and on the nose puns, but that's precisely the joke — various ways in which the filmmakers can cleverly make crass and racy references using any number of store items. Salma Hayek voices a taco shell named Teresa with suppressed urges she feels an unforgiving society would look down upon, and Nick Kroll, speaking in a New Jersey shore accent, is a broken douche product on a revenge murdering spree. 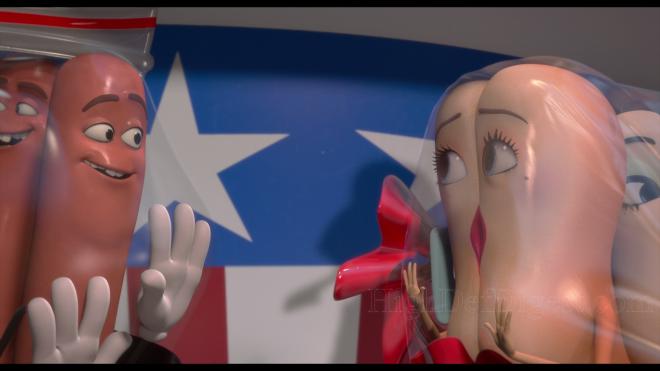 There is little room for delicate hearts in this crude and often boorishly blunt flick. However, what it lacks in subtlety, it more than makes up for with a surprisingly intelligent plot, suggesting the filmmakers toiling with some deeply philosophical inquiries about life on Earth. Beneath all the vulgarity and debauchery, which apparently are only a means for breaking into more poignant social taboos, we discover products bickering about other items displayed more prominently in better aisles and of being displaced from their shelves to make room for products that don't mix. A Third Reich-like regime of sauerkraut packages call for the extermination of juice, a bottle of liquor named Firewater (Bill Hader) tells of a time when he and his kind had the store all to themselves before being cast aside from their land, and Craig Robinson is a box of grits with repressed anger for crackers. But most of the bitter squabbling over who has rights to certain aisles comes from Sammy Bagel (Edward Norton doing his Woody Allen impersonation) and a Middle Eastern lavash (David Krumholtz). Their back and forth rivalry is peppered with various gags of current events leading to a larger stunt that'll leave any viewer in utter shock.

In fact, the final quarter will — as it is likely meant to — leave audiences completely appalled by the depravity while wondering how 'Sausage Party' ever passed the censors with only an R-rating. The unexpected visuals are hilarious though, the cherry on top the pie of juvenile excess. And amazingly, those final moments are probably not as offensive and shocking as Frank's existential journey of self-realization. After a jar of honey mustard (Danny McBride) is returned and passionately insists the stories about being chosen by benevolent gods into the "Great Beyond" are nothing more than lies, Frank sets off on a quest to learn the truth, and the filmmakers are just as blunt about the matter as everything else. Granted, they could have been a bit more diplomatic on the subject, but it's the sort of story that would make Heidegger, Kierkegaard and Sartre proud. In fact, many of the ideas touched on fit snugly, if also somewhat crudely, within Albert Camus's notions of the Absurd and Friedrich Nietzsche's concepts of self-actualization through art and will to power. Of course, the animated adult film's lack of subtlety in this area is arguably one of its weaknesses, but overall, given its crassness and vulgarity, the movie comes with a surprising level of intelligence and enlightenment some audiences will find appealing.

Sony Pictures Home Entertainment brings 'Sausage Party' to 4K Ultra HD Blu-ray as a two-disc combo pack with a flyer for an UltraViolet Digital Copy and glossy slipcover. At the moment, we are unable to verify the size of the content, but the dual-layered UHD66 disc sits comfortably opposite a Region Free, BD50 disc inside a black, eco-elite keepcase. At startup, the disc goes straight to an interactive main menu that changes screens when switching between the usual options while music plays in the background.

The groceries come alive in Ultra HD Blur-ay thanks to a superb, reference quality HEVC H.265 encode in HDR10, serving as a perfect example of what can be accomplished on the new format. Making it above and beyond a striking upgrade over its Blu-ray counterpart is the fact that the CG characters have a stunning 3D-like quality, almost if the 4K presentation were the result of stop-motion animation.

Simply put, the video is stunning and jaw-dropping from start to finish with razor-sharp lines and clarity in every frame. Each food item and condiment bottle, especially those with eyes bouncing above their lids, comes with a realistic roundness to their shape while the rest of picture reveals every nook and crook and other random objects scattered throughout the grocery store. The lettering on the labels of packages, storefront windows and the signs in the Great Beyond are razor-sharp. The most trivial detail, tiny nuance or particularity in the background is as sharply-defined as any object in the foreground, and the tiled floor of the store exposes the tiniest blemish and scratch from years of being walked on customers and shopping carts. Viewers can make out the dimples, brown burnt marks and the dry, rough texture of Kareem Abdul Lavash and Teresa del Taco, adding to the animation's realism.

Presented in its original 1.85:1 aspect ratio, the squeaky-clean, digital-to-digital transfer is a dazzling, hypnotizing feast for the eyes, full of vibrant colors that never sway and illuminate the screen with luxurious brilliance and energy. From the earth tones making up most all the food items to the sky blues and the reds looking almost like blood, the palette is continuously sumptuous with vivid, rich saturation, giving the movie a happily-go-lucky feel that's consistent right from the first opening moments. Other pastel hues glow with a boldness that further adds to the story's raunchy humor and gives each character a life of their own. Viewers can distinctly see a difference between the blues, purples, violets and magentas from the sunny days outside the grocery store. Colors subtly fade into other shades without a hint of banding, such the brown of bread products dimming into a more cream tint or the pasty-white features of Darren's face fading into an ugly, pale smoky shade in specific spots.

Also, contrast is right on the money and pitch-perfect, allowing for remarkable visibility of the most minute feature and facet, even during the deepest shadows in either the drug addict's house or Frank's journey in the kitchenware aisle. Whites are radiant and ecstatic with brilliant luminosity, providing the fluffy clouds and signs throughout the story an amazing, realistic glow. Full-bodied black levels are inky and luxurious with spotless gradations between the lighter and darker portions, adding to the splendid intensity of the three-dimensional image and delivering clear differences between the various shades.

Overall, looking beyond the simplistic-looking animation style, the 2160p presentation is simply phenomenal to watch on Ultra HD and really the preferred way to enjoy.

The party erupts on Blu-ray with an equally fantastic, reference-quality Dolby Atmos soundtrack that brings the celebration along with the existential chaos of nothingness.

The front soundstage is not much different than its DTS-HD counterpart, where much of the attention is focused and maintained across the entire screen, feeling broad and expansive. Only, those same noises in the background filling all three channels convincingly bleed into the front heights to create an awesomely immersive half-dome effect. A pristine mid-range exhibits superb detailing and separation between each instrument in Alan Menken and Christopher Lennertz's score, and action sequences maintain this clarity even in the loudest, most raucous moments. Amid all the mayhem and havoc, vocals remain well-prioritized and distinct, allowing listeners to enjoy every ridiculously, not-so-subtle innuendo and double entendre. The low-end delivers a dramatic punch and weight to the music while feeling equally robust and commanding during every explosion, crash of heavy objects and stomping of the giant human gods.

Piling on the hilarious juvenile revelry is the incredible amount of activity in the rears and ceiling speakers. Creating an almost continuously immersive 360° soundfield, various noises and activity move above the listening area. In the last quarter of the movie, debris falls all around, the cries and screams of all involved are heard everywhere, and several objects flawlessly pan from one channel to the next. Within the first ten minutes, an accidental spill turns into complete 'Saving Private Ryan' pandemonium, filling the room with gunfire, mini explosions in the distance and the confused voices of the wounded. Later, the war for freedom from the gods ignites again with the shouts from angry foods taking to the skies or flying down from the top shelves, almost as if falling on to the listener. Even quieter, more character-driven moments come with subtle atmospherics of grocery story activity, announcements overhead or the chatter of other food items celebrating the night, making for a demo-worthy 3D audio experience.

On the surface, 'Sausage Party' is simply another series of crude obscenities and lewd behavior from the imagination of Seth Rogen, Evan Goldberg and Jonah Hill. But hiding and sniveling in the shadows of all debauchery is a surprising amount of intelligence and enlightenment some audiences will find appealing while others will complete despise. The Ultra HD Blu-ray arrives with a phenomenal reference-quality audio and video presentation that makes this 4K version the best way to watch and enjoy the animated comedy. Although the supplements are disappointingly light, the UHD package is recommended for early adopters and the curious.

Sale Price 10.98
List Price 26.99
Buy Now
3rd Party 5.19
In Stock.
See what people are saying about this story or others
See Comments in Forum
Previous Next
Pre-Orders
Tomorrow's latest releases