It feels good to be bad… Assemble a team of the world’s most dangerous, incarcerated Super Villains, provide them with the most powerful arsenal at the government’s disposal, and send them off on a mission to defeat an enigmatic, insuperable entity. U.S. intelligence officer Amanda Waller has determined only a secretly convened group of disparate, despicable individuals with next to nothing to lose will do. However, once they realize they weren’t picked to succeed but chosen for their patent culpability when they inevitably fail, will the Suicide Squad resolve to die trying, or decide it’s every man for himself?

As if ripping a page from the Marvel playbook when it comes to adapting a newer and largely lesser known comic series for wider audiences — talking about 'Guardians of the Galaxy,' of course! — Warner Bros and DC executives follow suit with 'Suicide Squad.' Similarly to its Marvel counterpart, the comic book adaptation features a ragtag group of criminals who, unsurprisingly, have difficulty playing nice with each other while also squaring off against a seemingly more powerful supervillain. One major difference here is that these baddies are coerced into working with one another rather than brought together by circumstance, effectively removing for any sort of witty banter amongst the group as they predictably learn to overcome their egos and save humanity. Led by Viola Davis doing her best sternly apathetic, mercilessly self-righteous bureaucrat as Amanda Waller, a super-secret government agency allows the evildoers respite from their prison cells at the agency's behest. And according to a meeting with military leaders, grouping the worst of the worst is for the protection of national security.

And, this is where the movie, from a script by David Ayer, who also directed the box-office smash, then immediately dives head first into badness. Aside from a few expository words by Davis's Amanda during a private dinner, audiences are given little time to really know any of the characters, aside from the two most popular, recognizable faces. Will Smith plays elite assassin Floyd Lawton, a.k.a. Deadshot, who is captured by Batman (Ben Affleck) because his daughter (Shailyn Pierre-Dixon) tugs at his conscience. A little too deliberately, we're also meant to believe there is more to this cold-blooded hitman, eventually serving as the group's moral compass not so much because it's cannon as it is because, well, it's Will Smith. Why spend the money on an A-list talent and not give him the opportunity to ground the production with some dramatic weight. Then, there's Margot Robbie's Harley Quinn, a former psychiatrist turned cuckoo after spending time around Jared Leto's performance as the deranged Joker, who is more mafia crime boss with a grill and tattoos than the psychotic mastermind and sadistic prankster. 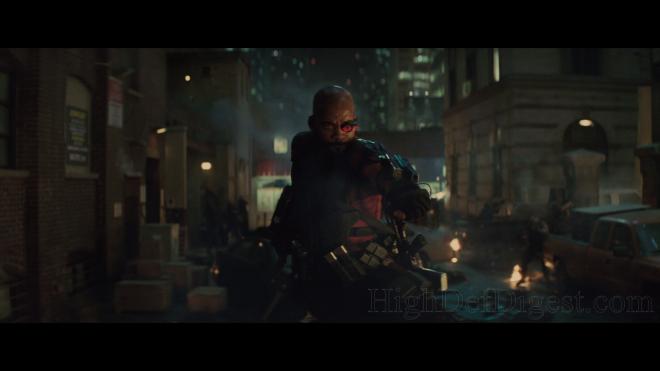 On the bright side of things, a good amount of time is spent on these two goofy screwballs and their warped love affair, most of it coming from several flashback sequences leading up to Joker attempting a rescue mission. But it's not enough to save this movie from itself and Ayer creating chaos simply for the sake of it or as a cheap device to move the narrative along since there's little else of much interest going on. Other team members are given less attention with even less backstory, such as Killer Croc (Adewale Akinnuoye-Agbaje) and Captain Boomerang (Jai Courtney) being quickly summarized in a couple minutes. It's even clear why Slipknot (Adam Beach) and Katana (Karen Fukuhara) are included except to make everyone else look cool. The only purpose Enchantress (Cara Delevingne) provides is as a motivating love-interest for Rick Flag (Joel Kinnaman), which wouldn't be a problem if the character were given more to do. The only other villain we're made to sympathize with is former LA gang member El Diablo (Jay Hernandez), and that's only because he show genuine remorse and guilt for his criminal past.

In an ever expanding race to catch up to Marvel's cinematic success, it's becoming clear this third installment to the DC extended universe ultimately seeks to satisfy and appease the established, loyal base rather than make new fans of neophytes. Readers will already be familiar with the characters and their history, such as Harley Quinn being a recent addition to the team, but her whimsically dark personality and demented sense of humor have been greatly watered down for her first screen appearance. This, in spite of Robbie's otherwise excellent performance. 'Suicide Squad' also makes itself directly related — a bit too blatantly, honestly — to the previous Superman movies while muddling its logic of assembling a special task force against acts of terrorism by squandering the team's talents to battle one of their own. Frankly, it's a sign of laziness because it frees the filmmakers from developing a new villain for them to combat. The "Extended Cut," which really only adds ten minutes of dialogue and another Harley/Joker flashback, improves on the theatrical version, but not by much.

Ultimately, the production feels rushed and piecemealed, perhaps the result of reshoots to supposedly adding humor. In either case, this is not the comic adaptation DC fans anticipated.

Warner Home Video brings 'Suicide Squad' to Blu-ray on a two-disc combo pack with a code for an UltraViolet Digital Copy. At the moment, we are unable to verify the size of the content, but the dual-layered UHD66 disc sits comfortably opposite a Region Free, BD50 disc containing the 134-minute "Extended Cut" of the movie. Both are housed inside a black, eco-elite case. At startup, viewers are taken to a generic static screen with options along the bottom and music.

Task Force X brings their wickedness and villainy to Ultra HD equipped with a tiptop, often stunning HEVC H.265 encode in HDR10, delivering a noticeable improvement and upgrade over the standard Blu-ray.

Showing a gritty, bleak style with a mostly subdued appeal, the freshly-minted transfer is awash with a nice thin layer of grain, giving the picture an appreciable cinematic feel. The presentation comes with a perceptible uptick in clarity, making the buildings, various vehicles, the weapons and the superhero outfits more distinct. The stitching in Harley's roller derby getup and the threading in the fabric worn by Deadshot are more noticeably detailed while Captain Boomerang's leather jacket and the tough scaly face of Killer Croc seem more worn and weathered. More apparent are faces revealing pores, tiny wrinkles and negligible blemishes, and the smoke flowing from Enchantress looking like individual fibers. Not only does the cast come with amazing lifelike textures, exposing beads of sweat and the tiniest smudge of grime, but hairs and the adorned bodies of Enchantress and her brother are extraordinarily sharper.

Shot on a combination of traditional 35mm and digital 4K cameras for certain sequences, the presentation remains true to the creative intentions of the filmmakers. Although much of the look leans heavily on the orange and teal palette, the 2.40:1 image is consistently emboldened by a wide range of vibrant pastel hues. This is most evident when the characters are initially introduced as the screen fills with sparkling neon pinks, dazzling magentas, glitzy mint greens and intense, true-to-life yellows. Surprisingly, some of the best scenes feature Enchantress' mystical weapon of destruction where we can plainly make out the subtle difference between the light blues and whites while also noticing hints of cyan. And then, there are also the several flashback sequences with Harley and Joker animated with richer greens and spirited reds while the photography seems engulfed in electrifying blues.

In spite of the excessively tone-down contrast and largely monochromatic cinematography, the 2160p video has the upper hand thanks the higher dynamic range. Specular highlights provide the metal armor, guns and other various weapons a more genuine glimmer and shine, even during the darkest moments. The best scenes worth noting are daylight sequences with vivid blue skies and glowing, puffy clouds, but with much of the movie taking place at night and poorly-lit environments, there are few of them worth enjoying. Black levels are richer and noticeably more varied without sacrificing any of the finer details in the deepest, strongest shadows. Exterior nighttime shots of the city skyline are beautiful where viewers can differentiate and make out individual buildings, making this a fantastic 4K presentation fans will favor over the Blu-ray.

The bad-guys go ballistic and save humanity with the same near-reference Dolby Atmos soundtrack, which defaults to a Dolby TrueHD 7.1 track for those not equipped for the new codec.

Compared to other Atmos tracks we've heard, our favorite ragtag group of supervillains don't stand toe-to-toe with them or create the sort of house-shattering ruckus we'd expect. However, the design is interestingly more subtle than overwhelming, mostly reserving the ceiling speakers for specific moments instead of a bombastic, balls-to-the-wall assault on the ears. The battles, of course, fill the room with a variety of sound effects panning flawlessly between channels with appreciable discreteness and directionality. Helicopters fly overhead either towards the screen or away from it, debris falls from the space above the listener, and rain is consistently heard pouring all around and directly above. The music and song selections also take advantage of the object-based format by lightly bleeding into the front heights and top rear channels.

On the flip side, the more dialogue-driven moments are noticeably silent and lacking, but understandably, the conversations take priority with clean, distinct intonation of every word said by the characters. Much of the activity in the sound design occupies the surrounds and rears while the front soundstage generates a spacious presence with substantial warmth and fidelity, immediately establishing a broad and terrifically engaging sense of space. An extensive and excellently detailed mid-range exhibits outstanding distinction separation across all three channels with convincing off-screen effects, which is most appreciated during the great selection of songs. An authoritative, room-penetrating low-end provides a palpable punch to every gunshot, explosion and violent confrontation, digging deep into the wall-rattling ultra-low depths on a few occasions (bass chart).

The same set of supplements are contained on the Blu-ray with the "Extended Cut."

Working diligently at establishing a cinematic universe of their own, Warner Brothers and DC Comics adapt one of the lesser known properties, 'Suicide Squad.' While it may not be a total, complete failure — there is some fun and entertainment to be found while Will Smith and Margot Robbie deliver notably performances — the story quickly runs out of plot and starts dragging its feet to the finish line. This Ultra HD Blu-ray arrives with a great-looking 4K video presentation that's an improvement over the standard BD and accompanied by the same excellent Dolby Atmos presentation. Though the supplemental material falls short of satisfying, the overall package will please loyal fans while early adopters will want to check it out.

Sale Price 17.98
List Price 37.99
Buy Now
3rd Party 11.61
In Stock.
See what people are saying about this story or others
See Comments in Forum
Previous Next
Pre-Orders
Tomorrow's latest releases