Scrat's epic pursuit of the elusive acorn catapults him into the universe where he accidentally sets off a series of cosmic events that transform and threaten the Ice Age World. To save themselves, Sid, Manny, Diego, and the rest of the herd must leave their home and embark on a quest full of comedy and adventure, travelling to exotic new lands and encountering a host of colorful new characters.

With each successive installment to the 'Ice Age' franchise, the humor that made the first two movies a genuine joy to watch seems to have melted away, and 'Collision Course' is disappointingly skating on thin ice, oblivious that the next entry will likely plummet into frigid, icy-cold waters. Admittedly, the movie is not a complete disaster, as some jokes and cultural references manage to tickle the funny bone on occasion, though I can't imagine even young viewers bursting into fits of laughter. But for large expanses of time, the gags are tastelessly flat — weird visuals about things inserted or coming out of animal's butts and unnecessary albeit very subtle sexual innuendoes — and much of the action humdrum. Meanwhile, certain aspects of the plot are frankly recycled from previous entries, exposing a bit of laziness. In fact, I'd go so far as to suggest it's the same plot as its predecessors. Our three main characters voiced by Ray Romano (Manny), John Leguizamo (Sid) and Denis Leary (Diego) venture out on yet another road trip to save themselves from extinction, along with Earth in the process.

The fourth sequel opens amusingly enough with the soothing, scholarly voice of famed astrophysicist Neil deGrasse Tyson detailing the universe's creation. It's a clever opening inspired by the surprisingly entertaining scientist's 'Cosmos' television program. He later lends his voice as Buck's imaginary weasel astronomer Neil deBuck Weasel, comically providing side commentary that makes his participation one of the film's worthy highlights. And as is the tradition of the franchise, our (only) favorite saber tooth squirrel Scrat is partly responsible for the doom of all life on Earth when he launches into space and inadvertently hurls a massive asteroid towards the planet. It's this sort of quirky farce that keeps attracting audiences back. However, the filmmakers this time around can't sustain the amusement beyond short spurts of action, such as Scrat's space adventures or Buck's (Simon Pegg) reintroduction to the series, resurrected from the underground dinosaur cavern where he thwarts a hungry family of dromaeosaurs (Nick Offerman, Stephanie Beatriz and Max Greenfield) who later seek revenge. 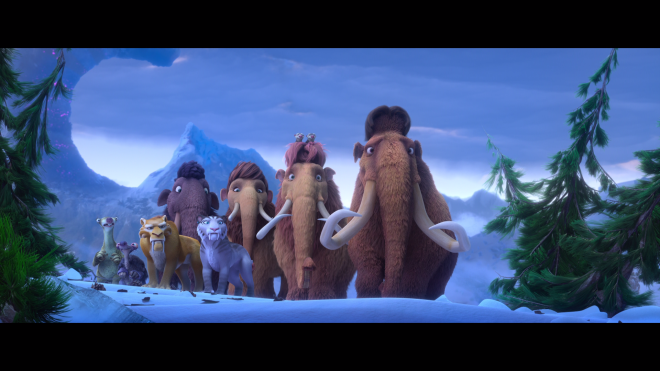 On a more positive note — the one unifying theme with each entry that makes the franchise somewhat ingenious and enduring — director Mike Thurmeier and his team of writers once again broadly relate life's impending doom to whatever personal-growth issue the trio of friends are faced with. Diego and his saber mate Shira (Jennifer Lopez) look at the children around them with thoughts of making a family of their own, though this is more an arbitrary aside and never discussed again. As before, Sid is the hopeless romantic in a clingy search for his soulmate, and the apocalypse only exacerbates matters. More importantly, the asteroid's approach is aligned with Manny and Ellie (Queen Latifah) coming to terms with Peaches' (Keke Palmer) wedding to Julian (Adam DeVine). Ignoring the fact this information is thrown at us out of left field, this big change in the family dynamic is a looming threat to the couple's realization their little mammoth is no longer the same little girl with all the time in world to spend with them. It's a sentiment any parent can relate to, but the subplot doesn't offer much in terms of humor.

During the motley crew's journey for diverting the asteroid's trajectory, 'Collision Course' introduces several new characters to its ever-expanding universe, which is to be expected. Only, this time around, the script seems to go out of its way in announcing prehistoric creatures and their uniquely selfish means of self-preservation. The dromaeosaurs are not only driving by hunger and vengeance, but also stupidly believe they can fly above worldwide cataclysm. Just past the halfway point, the gang discovers another hidden civilization existing in its own little bubble. Inside a giant asteroid from a previous collision that kind of throws the logic of this story for a loop, but that's neither here nor there. What's more important is quickly rushing through Sid potentially finding the love of his life in Brooke (Jessie J) and the gang failing to convince a new-age, yoga-loving llama (Jesse Tyler Ferguson), the leader of Geotopia as the asteroid dwellers call it, they're all going to die. And by this point, the jokes have all but fizzled away into a humdrum race against time, dragging the otherwise impressive visuals into yawn-inducers.

If the 'Ice Age' series continues the current path it is — yes, the filmmakers are currently tossing a few ideas around for the next installment — then it is on a collision course towards its own extinction. Hopefully, much like the quirkily resourceful prehistoric protagonists, producers see the seemingly natural disaster fast approaching and will change the direction of catastrophe.

20th Century Fox Home Entertainment brings 'Ice Age: Collision Course' to 4K Ultra HD Blu-ray as a two-disc combo pack with a flyer for a Digital HD Copy. At the moment, we are unable to verify if the correct size of the content, but the dual-layered UHD66 disc sits comfortably opposite a Region A locked, BD50 disc inside a black, eco-cutout case with an attractively glossy slipcover. At startup, the UHD commences with a series of skippable trailers before switching to a menu screen with the usual options along the bottom, full-motion clips and music.

'Collision Course' makes a huge impact on Ultra HD Blu-ray with a marvelously beautiful, near-reference HEVC H.265 encode in HDR10, boasting razor-sharp lines and clarity in every frame, from start to finish.

Viewers can practically count the individual blades of grass and each leaf of trees gleaming in the sunlight, and the minute characteristics and tiniest pockmark in the various rock formations are near photorealistic. Most impressive is the lifelike texture around the puffy but coarse fur of each animal, particularly the mammoths and Shangri Llama, moving and swaying with outstanding realism. The most trivial detail, tiny nuance or particularity in the background is as sharply-defined as any object in the foreground, and minor blemishes like the subtle scars and scratches on Buck or the dromaeosaurs chasing after him. On resolution alone, this video is simply phenomenal, giving owners a superb upgrade over its Blu-ray counterpart.

Better still, the 4K presentation is a dazzling, hypnotizing feast for the eyes, full of vibrant colors that illuminate the screen with sumptuous brilliance and energy. Benefiting tremendously by the wider color gamut, the screen is continuously brimming with bold sky blues and energetic greens throughout, but even more mesmerizing are the strikingly vivid, richly saturated secondary hues that create a warm, happy-go-luck feel. From Scrat's UFO ship and the giant asteroid racing through space to the crystals inside Geotopia, viewers will be astounded at the clear differences between intensely glowing blues, purples, violets and magentas.

Presented in a 2.40:1 aspect ratio, the 2160p video also displays contrast that's right on the money and crisp. Lots of stunning variation in the specular highlights allow for remarkable visibility of the most minute feature and facet in the distance. Whites are radiant and ecstatic with brilliant luminosity, providing the fluffy clouds an amazing, realistic glow. Meanwhile, full-bodied black levels are inky and luxurious with spotless gradations between the lighter and darker portions of the frame, adding a splendid intensity to the three-dimensional image and delivering clear differences between the various shades. Overall, this Ultra HD Blu-ray makes for one of the finest and most impressive releases yet.

While not taking full advantage of the object-based audio format, the design nonetheless delivers a broad and welcoming soundstage. Vocals are distinct and precise in the center with the smallest change in intonation perfectly heard. The music and song selections persuasively spread into the height channels, creating a pleasing half-dome quality, and bleed into the surrounds. Imaging is broad and expansive with convincing off-screen effects and superb separation between speakers, generating an engaging wall of sound that’s continuous. Though not earth-shattering, the low-end is amazingly deep and powerful, providing palpable, responsive weight to the action and an awesome rumbling effect to sequences with the asteroid.

Much of this excitement continues in the sides and rears as various subtle atmospherics generate an amusingly immersive soundfield. From the wind blowing through the trees to sequences in and around Geotopia, various effects bounce and pan from one speaker to the next with flawless movement and directionality. Sometimes, those same effects bleeds and echoes into the ceiling speakers, but sadly, it's not enough for creating the sort of 3D, dome-like feeling expected of the audio format. For large chunks of the running time, overhead activity is noticeably lacking and silent. However, in the last quarter of movie as the asteroid approaches, the room erupts into explosions and fiery chaos as debris discretely falls all around and above, creating a much-appreciated immersive finale with lots of excitement.

Marking the fifth installment in the 'Ice Age' franchise, 'Collision Course' unfortunately lacks the charm and humor of its predecessors, showing the series starting to lose its steam. Although not a complete disaster with a couple humorous moments sprinkled throughout, it's become increasingly clear the franchise is on a collision course towards its own extinction. The Ultra HD Blu-ray arrives with a fantastic, near-reference 4K video presentation while also receiving a nice upgrade with a great Dolby Atmos audio presentation. Offering the same collection of supplements, the overall package is worth checking out for fans and early adopters.

Sale Price 14.39
List Price 26.5
Buy Now
3rd Party 14.39
In Stock.
See what people are saying about this story or others
See Comments in Forum
Previous Next
Pre-Orders
Tomorrow's latest releases