Four waves of increasingly deadly alien attacks have left most of Earth decimated. Against a backdrop of fear and distrust, Cassie (Chloë Grace Moretz) is on the run, desperately trying to save her younger brother. As she prepares for the inevitable and lethal 5th wave, Cassie teams up with a young man who may become her final hope – if she can only trust him.

After a highly promising and fairly captivating opening, 'The 5th Wave,' the latest adaptation of a popular YA series that spans three books, settles into a monotonous routine of predictability, following the usual collection of tropes and conventions that turn an easy piece of entertainment into a chore. I hoped for better from J Blakeson, the British filmmaker who made quite the impression in 2009's 'The Disappearance of Alice Creed,' effectively marking this box-office disappointment as his American debut. And for the most part, his particular brand and style is well showcased in this story about an alien invasion that puts humanity on the brink of extinction, making a good deal of this otherwise mind-numbingly plain production visually amusing. But even Blakeson is limited by a prevailing, oh-so-familiar blueprint that offers little room for alteration and genuine creativity, essentially making any of the imaginative touches he designed with cinematographer Enrique Chediak moot. And so, despite its visual pleasures, the sci-fi action thriller ultimately fails to provide any worthwhile surprises.

That aforementioned opening thrusts audiences into the middle of the invasion after the fact, showing Chloë Grace Moretz fearfully running through the forest to a gas station food mart armed with an AR-15 rifle apparently too heavy for her to carry. In the span of a couple minutes, Moretz's emotional 16-year-old Cassie Sullivan is confronted with a situation that basically surmises the plot's central dilemma when she kills a wounded stranger with bated breath because he might be an alien disguised as a human. The story then momentarily switches to an extended flashback showing how events led to that particular moment, how a typical and average teenager went from protective sister and good daughter who's only worry was a school crush to a frightened survivalist that will kill if necessary. This entire segment, taking about a quarter of the 112-minute runtime, makes for an engaging watch as it also features the first four of the five waves hinted at by the film's title. There's a fair amount of suspense and a sense of urgency speeding each scene along, nicely displaying Blakeson's talent behind the camera. 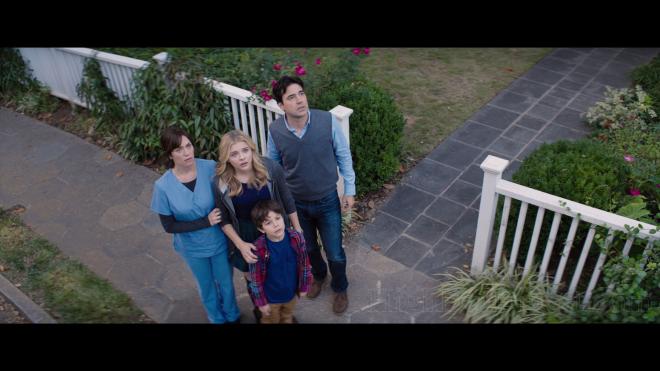 It doesn't hurt that 19-year-old Moretz is also a joy to watch, delivering a convincing performance as a teen caught in the middle of a global catastrophe that impels her into adulthood if she wishes to survive. She possesses a natural charisma and allure that has others gravitating towards her without much effort. She takes control of a scene even when she's not the central figure of a conversation and confidently establishes herself as the moment's emotional core. Other actors do well around her, and their portrayals seemed elevated in her presence. Unfortunately, when Moretz is not involved, much of the film appears to suffer from melodrama and campy theatrics, such as the moment über-soldier Ringer (Maika Monroe) meets Ben Parish (Nick Robinson), Cassie's school crush. Later, Alex Roe plays love-interest, dreamboat hottie Evan with the sort of cardboard stiffness and one-dimensional dullness expected of a boring love triangle plot device. The story devolves into lameness as Monroe feigns interest for Robinson and Roe predictably is not who he seems, taking viewers into humdrum territory riddled with tedious hurdles.

Admittedly, the original story by Rick Yancey is an intriguing tale that essentially combines Jack Finney's The Body Snatchers — and the subsequent big-screen adaptations — with John Milius's cult favorite 'Red Dawn' by film's end. In spite of that, what ultimately ruins 'The 5th Wave' is a surprising lack of tension after Cassie's long flashback sequence, and though Liev Schrieber and Maria Bello provide a formidable presence, the teens are never really confronted with daunting challenges and taxing obstacles. Never is there a sense of genuine danger or the possibility of failure, effortlessly defeating barriers that fail to excite, particularly during sequences when Cassie saves her brother from one disaster after another. It also doesn't help that the computer-generated special effects, such as a massive tidal wave and a colossal explosion of an army base, look cheap and cartoonish. Added to that, it's never made clear why the alien invasion commences in a small town in the middle of Ohio with little to no strategic advantage. In either case, it wouldn't help moving the setting to a metropolitan area because this invasion is a dud.

Sony Pictures Home Entertainment brings 'The 5th Wave' to 4K Ultra HD Blu-ray as a two-disc combo pack with a flyer for a Digital HD Copy. At the moment, we are unable to verify the size of the content, or if the disc is dual-layered or tripled-layered. The new UHD disc sits comfortably opposite a Region Free, BD50 disc inside a black, eco-cutout case. At startup, the disc goes straight to an interactive main menu screen with static stills from the movie and music playing in the background.

As the wave of Ultra HD Blu-ray continues to roll into home theaters, the YA sci-fi actioner arrives with it’s day-and-date Blu-ray counterpart, giving early adopters the opportunity to compare the differences between the two. The results, unfortunately, don't offer a significant difference between the two formats, which is not to say fans won't be able to note any visible improvements. Only, that this HEVC H.265 encode in HDR10 is not the major upgrade we'd expect of the format, offering much of the same extraordinary and often stunning detailing as seen in the Blu-ray. Granted, the overall video does show better definition and clarity throughout, from the threading in the denim of the jeans and the combat uniform of soldiers to the fabric of straps and the wood grain of several shacks. But it's not a night and day difference, or at least, it doesn't deliver the visual impact that would prove to be demo worthy. Nonetheless, and from an objective standpoint, this ultra high-def presentation is excellent and in fantastic condition, sure to please most looking to expand their still growing UHD library.

Perhaps, part of my reservations with the overall quality of the freshly-minted transfer might be due to the origins of the source. Shot entirely on a digital camera with a max resolution of 3.2K, the elements were later mastered in 2K digital intermediate, but it's uncertain which of the two was used, though I suspect Sony might have gone back to the original source. The veins and fine lines in the leaves of surrounding foliage are distinct, and the rough edges of tree barks are razor sharp. While the majority of the photography looks splendid throughout, some of the best moments are those sequences taking place within the forest where every leaf moving on branches in the distance are crystal clear. At times, cinematographer Enrique Chediak photographed scenes in a shallow focus, but those interesting moments maintain an excellent sense of depth and clarity. Facial complexions appear natural with lifelike textures, exposing every wrinkle, pore and blemish in the faces of actors. The only drawback is a couple instances of aliasing around the sharpest edges of objects, buildings and large vent grades.

Presented in a 2.40:1 aspect ratio, contrast is spot-on and pitch-perfect with brilliant, crisp whites that make the film really pop and burst off the screen, similar to the Blu-ray. The video also arrives with superb brightness levels, displaying inky rich, full-bodied blacks with exceptional gradational differences between the various shades. Even in poorly-lit sequences, the smallest object in the background is plainly visible while still able to see the distinction from the shadows and dark clothing. Probably of most interest to early adopters is that Sony has graced the picture with new color grading so as to take advantage of the wider color gamut, and the results are fantastic. The palette offers a sumptuous array of radiant, energetic primaries that make the visuals come to life, and there are few moments that can serve as demo clips for showing what the format is capable of. Secondary hues are equally top-notch, animating every scene with a lovely, picture-perfect warmth and richness that makes forest sequences quite stunning.

The invasion lands on Blu-ray with an impressive and demo-worthy Dolby Atmos soundtrack that nicely complements the many action-packed visuals. Similar to its DTS-HD MA counterpart, imaging is highly engaging and expansive with lots of background activity that keeps much of the film within the front soundstage. A sharply detailed mid-range exhibits superb clarity and differentiation between the softest and loudest segments without the slightest hint of distortion. However, compared to the Blu-ray, this lossless mix offers a slight improvement with more superb channel separation and movement across the entire screen with marvelous off-screen sounds while maintaining precise, well-prioritized vocals in the center. Several moments come with effects that discretely move into the heights, creating a highly engaging half-dome effect. The low-end is strikingly powerful and responsive with a couple authoritative, wall-rattling moments, such as the earthquake, the tidal wave sequences and various explosions.

On the whole, rear activity is often more silent than not, which is not an entirely bad thing since the fronts and heights do a majority of the heavy lifting with much of the focus on character interaction and dialogue. Nevertheless, surrounds and overheads are employed fairly often with the room bursting to life when debris and gunshots whizzing everywhere while helicopters hover and fly from the front to back and from one side of the room to the other, utilizing the ceiling speakers in every instance. Theses same action sequences reveal superb directionality and flawless panning, giving one's system a welcomed workout. Quieter moments also arrive with subtle atmospherics, like birds chirping high above in the trees or the echo of voices resonating all around. Probably the best moment, which also would serve as an excellent demo clip, is the rescue sequence in the last quarter of the movie where random noises of destruction occupy the entire soundfield and generate a satisfying dome effect. The score makes the best use of the format, spreading into the front heights for generating a larger soundscape.

In spite of a highly promising opening, 'The 5th Wave' quickly settles into a monotonous routine of predictability, relying on standard tropes and conventions rather than expanding on its fairly intriguing start. The latest adaptation of another popular YA series stars Chloë Grace Moretz in an admirable performance that's sadly wasted in a story that doesn't offer much of a challenge to the characters, let alone the audiences.

On the plus side, this Ultra HD Blu-ray arrives with an excellent 4K video presentation. Unfortunately, it also comes with a couple minor issues worth noting and doesn't really offer the significant jump from its Blu-ray counterpart as would be expected. On the other hand, the movie arrives with a top-notch, reference quality Dolby Atmos audio presentation, along with the same collection of supplements, making the overall package worth checking out for fans and early adopters enthusiastic about the new format.

Sale Price 14.57
List Price 26.99
Buy Now
3rd Party 13.37
In Stock.
See what people are saying about this story or others
See Comments in Forum
Previous Next
Pre-Orders
Tomorrow's latest releases