From Beyond - 4K Ultra HD Blu-ray

After the success of Re-Animator director Stuart Gordon reteamed with Brian Yuzna, Jeffrey Combs, and Barbara Crampton to deliver the next dimension of terror - From Beyond. Another gnarly pool of Lovecraftian body horror, the film keeps the humor dark with great effects. Now with a brilliant new 4K Ultra HD release from Vinegar Syndrome, the film looks and sounds amazing with a trove of new and archival bonus features. Highly Recommended

Crawford Tillinghast (Jeffrey Combs) toils away working in the attic lab of the perverted but brilliant Dr. Edward Pretorius (Ted Sorel). Using their new invention the resonator, the men are on the verge of discovering a new plain of existence by stimulating a dormant gland within the human brain. When the experiment results in Dr. Preorius’ head being bitten off by an interdimensional creature, Tillinghast must prove to the beautiful Doctor Katherine McMichaels (Barbara Crampton) that the machine is real, it works, and a terrifying new dimension is within reach. 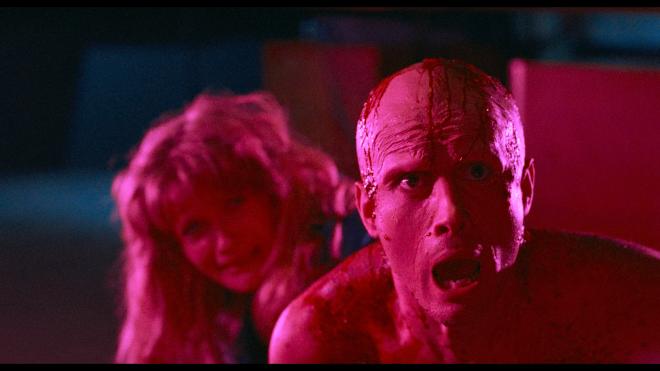 You have to hand it to filmmakers for making the most out of public-domain properties with slim material to work with. Based on H.P. Lovecraft’s short story - all seven pages - Stuart Gordon reteamed with his Re-Animator cast, writer, and crew for another fleshy spin into science fiction-themed body horror. As a whole, the film sticks pretty close to the basics of the story with some obvious expansions and elaborations - along with a lot more BDSM sexiness. It may not be as overtly humorous as Re-Animator, but this film doesn’t shy away from celebrating the macabre with a wink, a smile, and about 100 gallons of glycerine and gore.

Jeffrey Combs leads the pack of Gordon’s company of players as the high-strung Tillinghast. The dynamic and grossly underappreciated actor got to play things straight as the driven scientist in way over his head. Returning for more fleshy fun is Barbara Crampton as Tillinghast’s doctor assigned to assess if he’s crazy or telling the truth. There were concerns she’d be too young to convincingly play an esteemed doctor but she handles the material with gusto. Next in the pack is Dawn of the Dead veteran Ken Foree as the straight man of our lead trio. He’s there to absorb all of the techno mumbo-jumbo for the audience while also getting to go head-in on some action and gore sequences. Then we have the underrated Ted Sorel as the gooey fleshy monster from inter-dimensional hell - Dr. Pretorius. He’s an especially sinister and messed up creature from beyond our realm of understanding and really gets to chew the scenery... as well as the cast. 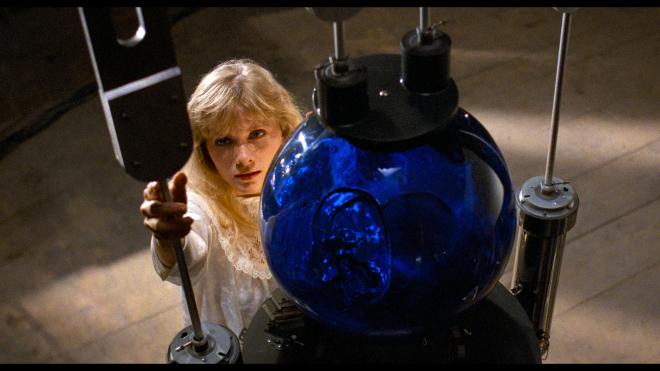 Stuart Gordon had hoped between Re-Animator and From Beyond to keep producing a series of Lovecraft adaptations much like Roger Corman with his Poe productions. Sadly this film pretty well flopped at the box office stymying those cinematic aspirations. Gordon would move on to projects like Robot Jox, Honey I Shrunk the Kids, and Body Snatchers before bringing Combs and Crampton back for the video store classic Castle Freak.

Like so many horror film fans, once I discovered Re-Animator I had to find everything Stuart Gordon and Brian Yuzna made together. Diving head into Society without any warning was quite the experience and Return of the Living Dead Part III was very different from its series siblings, but I steadily developed a love for this particular brand of slimy body horror. This wasn’t anything like what Cronenberg was bringing with The Fly or Videodrome. This brand of fleshy scary stuff had a particular sheen to its sliminess that you could practically smell when you watched it.

As a whole, From Beyond may not be as tight as Re-Animator but it’s a solid flick. At 86 minutes it accomplishes a lot very quickly without feeling like anything is missing. The cast is great. Gordon’s direction is assured and inventive. The gore and special effects by John Carl Buechler, Mark Shostrom, John Naulim, and Anthony Doublin is gnarly fun drippy stuff. It's a great popcorn flick or if you've got a group of cult film fans it'll get their attention!

Vital Disc Stats: The 4K Ultra HD Blu-ray
Vinegar Syndrome activates all four panels of the resonator to bring a new 4K Ultra HD Blu-ray of From Beyond into this reality. A three-disc set, the 4K version is pressed on a BD-66 disc, with the 1080p version scoring a Region A BD-50 disc, and a second Region A BD-50 disc reserved for bonus features. The discs are housed in a standard black three-disc case with separate bays without being stacked. Artwork features newly commissioned art by Tom Hodge with the original theatrical poster art on the reverse side with the Hodge art serving as the slipcover. The discs load to animated main menus with traditional navigation options. 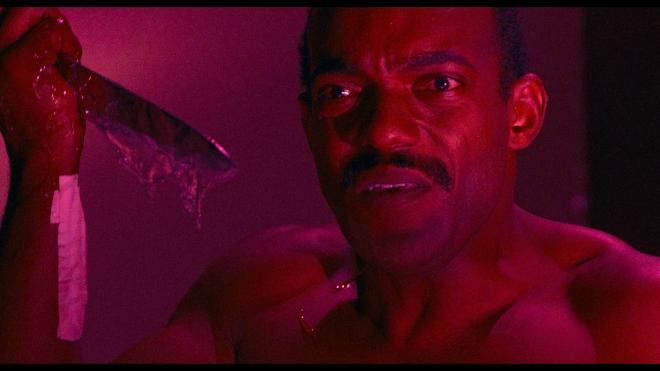 Reportedly sourced from a new 4K restoration of the original 35mm negative, this is another winning cult classic on 4K Ultra HD Blu-ray from Vinegar Syndrome. As a relatively obscure title that didn’t get a multitude of releases over the years, this is a clear and obvious improvement over Scream Factory’s then very impressive 2013 Collector’s Edition Blu-ray. Ten years of technical improvements gives fans much-improved detail clarity with a more natural and cinematic film grain presence. Facial features, costumes, the production design, and of course all of the fleshy bits get their day in the sun.

HDR10 works its magic for this release giving the image much more stable black levels, color shading and saturating, with bright crisp whites. I was really impressed with the purple flickering lighting of the resonator and how much more dynamic that effect looked here compared to the old Blu-ray. Likewise black levels also pick up their subtle improvements from total blacks that are deep and inky without crush and some welcome shadow variances with all of the lighting effects. Primaries are well resolved and flesh tones are healthy and accurate. The image is also immaculately clean without any signs of speckling or damage. They also fixed the slight film judder issue of the previous release as well. All around a beauty of a release.

Now I wasn't able to get a comparison video past the YouTube copyright holdups so I threw these together of the 2013 Blu-ray versus the 2023 4K, it was difficult finding scenes that were symmetrical enough. Hope they're helpful: 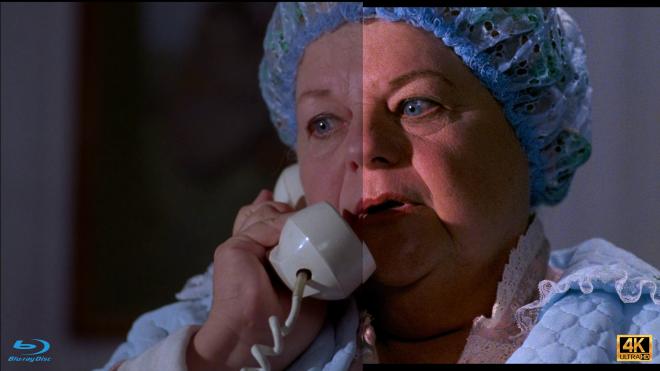 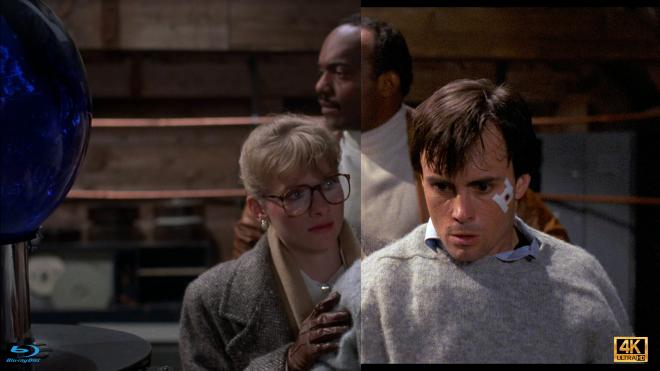 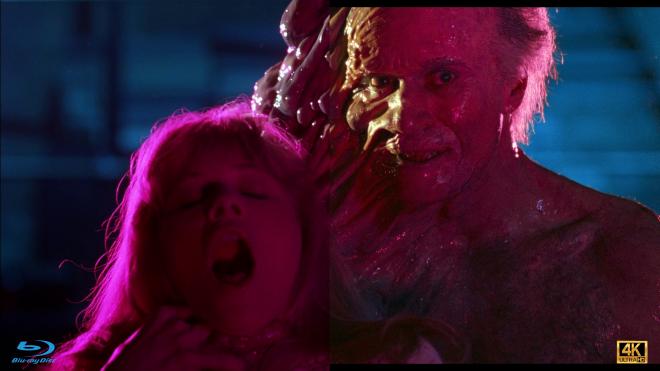 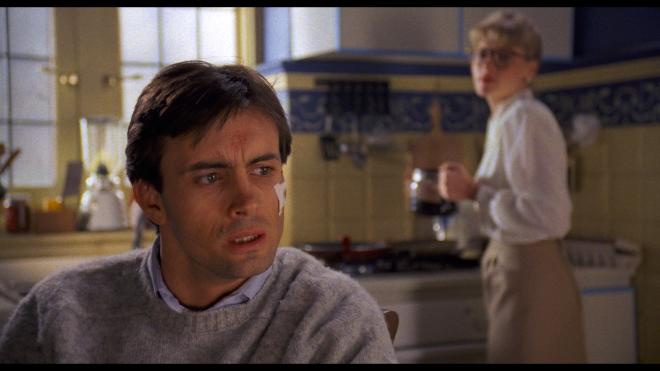 The 4K and 1080p discs offer up what sounds like the same DTS-HD MA 5.1 and 2.0 tracks from the 2013 release. Which isn’t bad at all. I really liked the 5.1 mix the last go-around feeling that it gave the film plenty of life and vigor where it counted. The hum of the resonator and the creature sound effects got plenty of attention. I flipped over to my receiver’s DTS Neural:X function and found that gave the track some extra love and attention as well. All around two solid tracks to choose from. 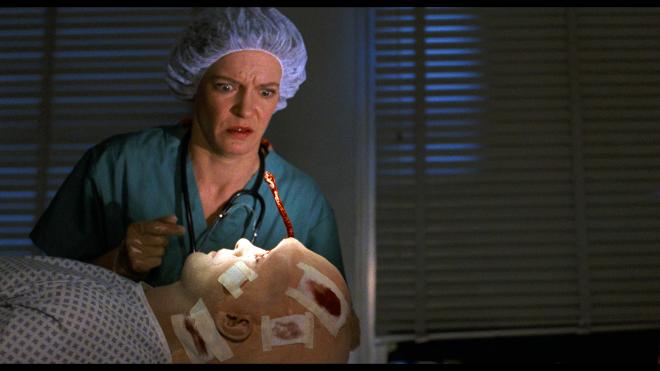 Vinegar Syndrome pulls out the stops for this release of From Beyond. On top of porting over most of the archival materials from the past releases, they also produced a new feature-length making-of documentary featuring new cast and crew interviews that really dives deep into the production and shooting in Italy and working at the old studios that apparently didn’t have heat. There are a lot of great nuggets throughout. The archival audio commentaries from Stuart Gordon and Dennis Paoli are also solid listens if you haven’t gone through them before. Of the missing archival bits, the only one I noticed that wasn't here was the brief extra from the 2013 Blu-ray about the editing of the film and the missing footage. 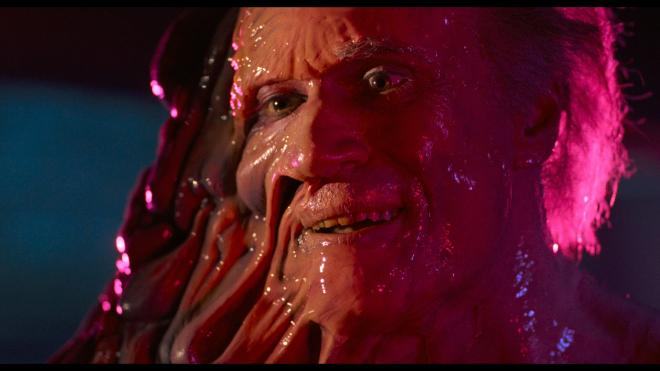 It may not have been the massive success of Re-Animator but Stuart Gordon’s From Beyond is every bit a faithful and impressive Lovecraft adaptation. The film holds up nearly forty years later with a great cast and an impressive array of special effects. It might not be as overtly funny, but it’s got a delightfully twisted sense of humor all its own. Making its 4K Ultra HD Blu-ray debut, From Beyond scores one hell of a great three-disc release from Vinegar Syndrome. The film looks and sounds terrific thanks to a new restoration with HDR10 capped off with hours of new and archival bonus features. A great hit for the collection - Highly Recommended